Part of the magic of walking through Marshall Woods on a beautiful fall day was the big trees.  There were quite a few - sugar maple, ash, beech and basswood on the lower gentle slopes below the escarpment, and a number of very large yellow birch and white cedar on the rocky slopes. 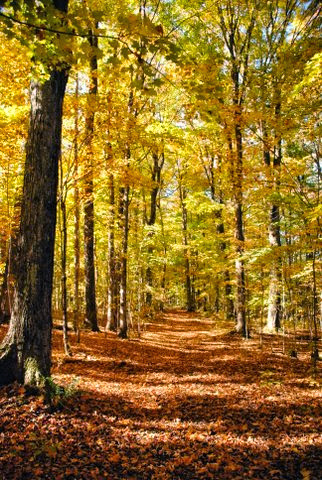 Most of the larger trees were found along the old woodland road, now in part a winter snowmobile trail, but beautiful to walk at this time of year.  Do I need to repeat how the morning sun filtering through the yellow leaves added to the atmosphere? 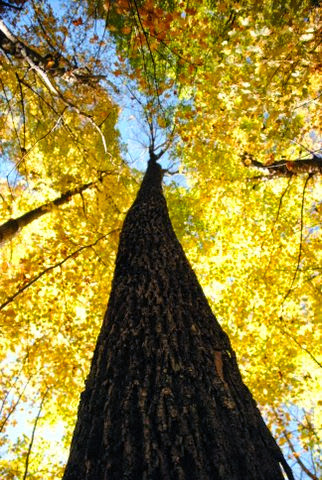 One of the first huge trees was this large white ash, towering straight up toward the canopy.  Open-grown trees can get a larger trunk but usually they're short and fat.  It's the tall almost straight trunk, probably 60' at least to the first branch that marks this as 'old growth' (relatively speaking).  If you know hardwood trees, you can recognize the deep vertical ridges of the ash bark. 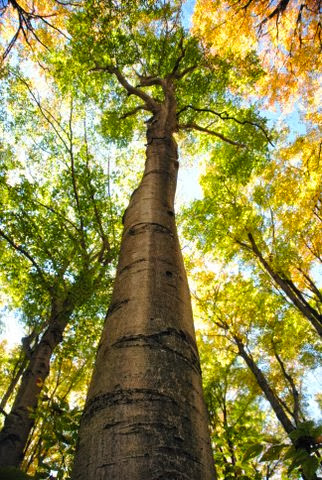 This is a large American beech, with still mostly green leaves, but also a very large tree.  Many beech around here are succumbing to the beech scale disease which shows up as small white scales on the bark.  I've tried many ways to take pictures of big trees in the woods, but I like these shots looking up the trunk toward the canopy as well as anything, so that's usually the way I illustrate the really big trees. 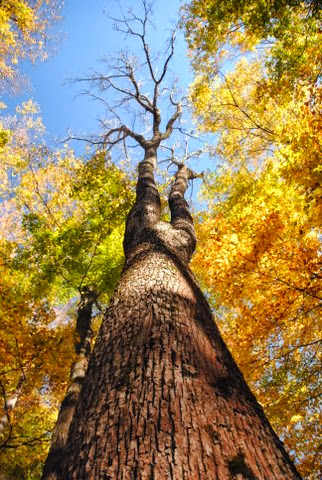 And this one is a huge basswood.  It's a bit unusual to find a single basswood this big; usually they grow in clusters of smaller trunks, often 6-8 together.  This was about the largest I've ever seen, and has already lost its leaves.  Basswood is a favourite of wood carvers, as it's relatively soft and easy to carve compared to other hardwoods. 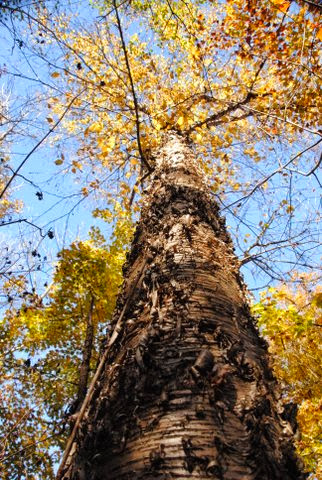 Once we got beyond the sugar maple forest and started up the rocky slope to the escarpment, there were numerous yellow birch.  This is a huge one, shaggy with the little curls of silver-yellow papery bark peelings.  I was surprised to find such a large group of them together.  The other walkers clambered further up the steep slope to see a huge cedar, but I elected to stay below and take more pictures. 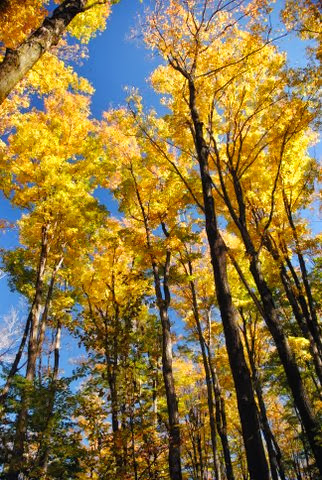 All in all, this was a memorable walk.  A beautiful fall day with sparkling blue sky, through a largely undisturbed mature forest along an easy trail, with other naturalists who like to stop and look at things.  I won't forget this outing for awhile.
Posted by The Furry Gnome at 7:30 PM