First, I should point out up front that I have no known family indigenous history, and no right whatsoever to speak on behalf of any indigenous people.  Still, we who represent 'white Canada' have to start someplace, and the first step for me is understanding.  I have read numerous indigenous leaders saying the same thing.  Corrections and advice is welcomed.

In pursuing my interest in Indigenous people, I have benefitted greatly from a book by A. J. Ray, entitled 'I have Lived Here Since The World Began'.  Most books like this have chapters on each major native group across Canada.  Typical is the book by McMillan and Yellowhorn entitled 'First Peoples in Canada', widely used in university courses.    Anthropoloical research on aboriginal language groups is an important foundation, as is archeological research.

Ray takes a refreshingly different approach, discussing the history chronologically, starting with life before white interlopers arrived all the way up to the political organizing of the past few decades.  They are both heavy duty textbooks, so I certainly would not recommend them as light reading!  But my academic mind is enjoying them as long as I take them slowly.

Here's a map illustrating the Aboriginal peoples in Canada.  As you can see, the individual tribe names on the map suggest a much more complex number of bands at the local level than the colours on the map do. 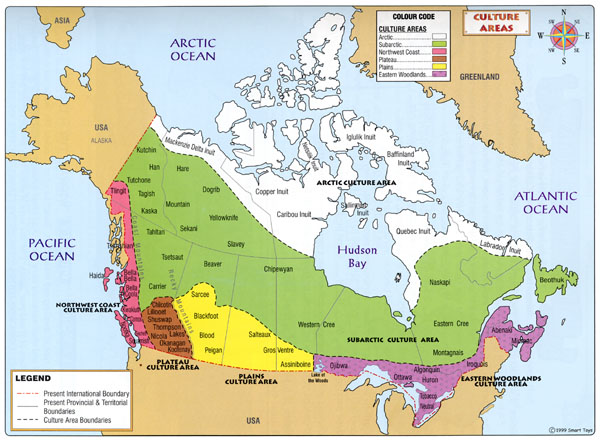 Based on this map (and there are numerous others like it), there are about six major indigenous groups in Canada.  They're largely based on language and are mostly the work of anthropologists.  They can of course be subdivided further, particularly on the west coast.
Ray starts his book with a complex map based on the primary different food sources across the country, from salmon on the west coast through bison on the prairies and deer or growing corn in southern Ontario to marine mammals and fish in the Arctic.  Then he adds the broad transition zones such as the shift from bison to woodland bison to moose to caribou as you move north from the prairies to the Arctic.  Primary foods are supplemented in some regions, such as by fishing and hunting maritime mammals in the Maritimes, and by hunting waterfowl in the vast wetlands of the Hudson Bay Lowlands.
Reading this I quickly realized how closely the indigenous peoples are adapted to their local environment and how diverse the cultures are across Canada.  The Haida and other northwest coast tribes fished for migrating salmon, they made plank cedar houses out of the giant cedar trees, and because their food supply was so reliable and cedar is such an easy wood to carve, they carved monumental total poles.  It all makes sense.
Prairie tribes hunted for bison, made teepees out of bison hides and moved regularly to follow those bison.  When the American bison slaughter ended, their way of life was doomed.  Iroquois in southern Ontario could clear the trees on the lighter sandy soils and grow corn, squash and beans (the 'three sisters'), while hunting deer in the woodlands.  They built longhouses covered in elm bark from the giant elm trees, and lived in palisaded villages.  When settlers moved in after the War of 1812, their way of life was also doomed.
The hunters of the vast boreal forests from Newfoundland to the Yukon followed the moose and fished at the river mouths. They tended to follow a seasonal migration pattern, usually returning to the same areas such as a particular river mouth for different reasons over the year.  You can easily understand how being forced to live on reserves disrupted their way of life.  In the Arctic the Inuit lived in snow houses ('igloos') on the ice and hunted for seals at breathing holes.
What all this amounts to in my mind is a range of very diverse and vibrant cultures among Indigenous peoples from coast to coast.  Even though there was suffering and starvation some years, the image I have is, on balance, a positive one.  And this brings me finally to my title, 'Teepees and Totems', symbolic of this way of life before we all arrived and started making a mess of it! 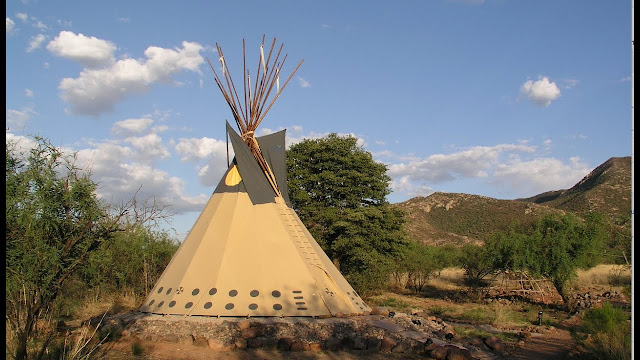 The teepee was eminently adapted to a prairie way of life where bison were plentiful.  This is a replica you can buy today. 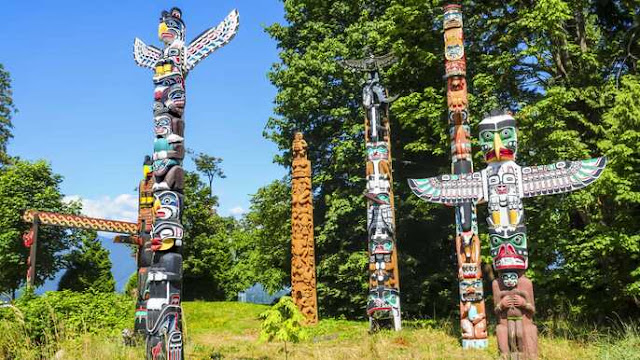 The famous group of totem poles at Brockton Point in Stanley Park, all from west coast indigenous carvers, though 2 or 3 are now replicas with originals in museums.  The iconic 'Thunderbird House Pole' on the right was carved by  Tony Hunt, and has been a big influence on west coast native carvers since.  The original was carved by a Kwakwakka'wakw' artist in the early 1900s, and was an actual house pole from Vancouver Island. On the far left is a gateway carved by Susan Point of the Coast Salish people, the group that originally lived in the Vancouver area.  This site is now said to be the most visited tourist spot in Vancouver.  The poles of course have been repainted since the originals were installed some 75 years ago.
The positive image I have started to erode quite quickly when contact with Europeans started, especially because of smallpox which decimated native populations, particularly on the west coast.  But this was not the political destruction of the Indian Act, residential schools and other destructive policies of the 20th century.  We will get to those later.
Tomorrow, 'Explorers and Fur Traders'.