Like the relatively peaceful co-existence of whites and natives for the first 200 years in Canada, our own memories are almost uniformly positive.  Through my own memories as a child, our trips with our kids 30 years ago and our own more recent visits, we've been impressed with the rich diversity of the Indigenous cultures within the land we know as Canada.  If we could even return to a fraction of these positive memories it would be amazing. 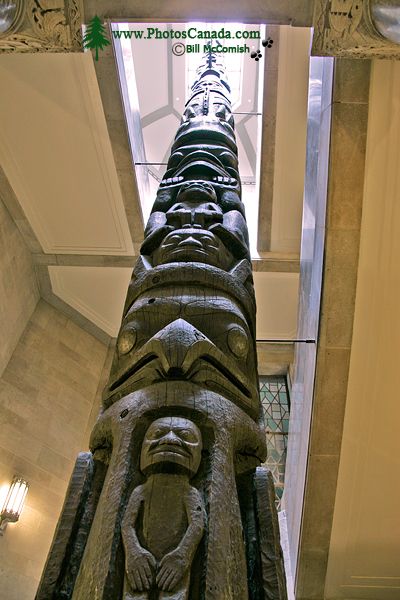 My own first memory of Indigenous culture is the incredible totem poles inside the Royal Ontario Museum.  To my more-or-less 8 year-old eyes, these were 300 feet high (the tallest is actually 80 feet), and made me realize that there were people in Canada who could create these!  They were actually acquired in 1920 and installed in the museum during a major expansion in 1933; the totems were moved in first and the stairways were built around them!
At a time when repatriation of native artifacts from museums is widely demanded, these totems have been blessed and will remain where they are so people can learn about the amazing northwest coast Indigenous culture.  They are now held in trust for the Nisga'a and Haida Nations where they originated. 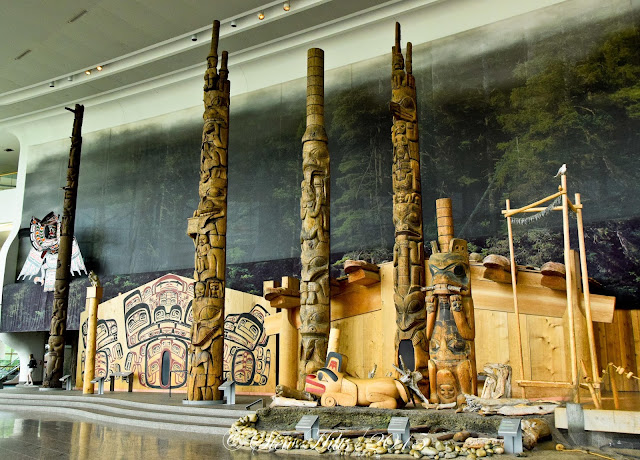 The spectacular totems and house fronts in the Canadian Museum of History are similar but modern.  Carvers and builders were brought in from the Haida and other northwest coast First Nations to create these quite amazing displays.  I think most Canadians would be astonished at the size and beauty of these house fronts.  All recent carving, but put in place by the Indigenous carvers themselves (taken in 2015).
On our trips west with our kids, pulling a small camper trailer, we ran into other highlights of Indigenous culture.  On our very first trip we stopped at the Fort Macleod Museum of the North-West Mounted Police (the forerunner of the RCMP) and watched three young Blackfoot dancers in traditional dresses perform outside the museum.  I'll admit, I was mesmerized.  It was the first time I'd ever seen native dancers and heard the haunting music. 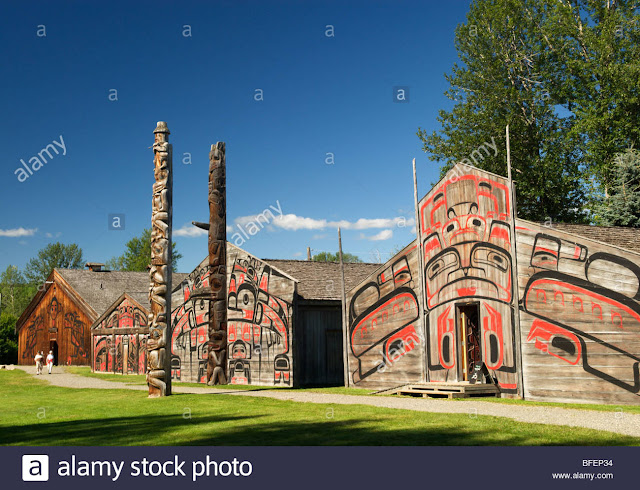 On a later trip driving from Prince Rupert up the Skeena River we stopped at the Hazeltons and visited the historic village of Ksan.  There they have 5 newly-built traditional houses and some totems.  We watched a dance performance inside one which was used as a small theatre space.  I was more interested in the buildings themselves. (A stock photo, but a good one).
Years later when William was flying out of Prince Rupert we visited and he flew us out to Haida Gwaii where we stayed a few days (our only flight with William).  We drove down to Skidegate where we watched a native Haida carver working on a new totem pole outside the small museum.  It was fascinating to watch the carving process!
William himself gained a good reputation of Indigenous communities from his work.  One summer early in his career he worked as the pilot for an isolated reserve in northern Ontario, flying families out to their trapping or fishing spots and doing medical flights to Thunder Bay.  He lived on the reserve for the summer, one of only three whites - the nurse, the teacher and the pilot.  Later he worked as a pilot for Wasaya Air, the native-owned airline that flew freight into distant communities only otherwise served by winter ice roads.  And once he became a water bomber pilot he learned that natives made the best forest fire fighters, simply because they knew how to work safely in the forest.
In later years I took a group of students to 'Neyaashiinigmiing', the Nawash community that lives on Cape Croker.  We visited a native fisherman and helped him unload his catch of the day, and later accompanied the band forester on a walk through the managed forest on top of the escarpment.  No evidence of clear-cutting here!  The students also got to visit with elders of the community.
Much more recently we visited Stanley Park with our grandchildren, mainly to see the Aquarium, but we also stopped at the nearby totem poles on Brockton Point.  That's our daughter in red, our grand-daughter in the stroller and our grandson on the left. 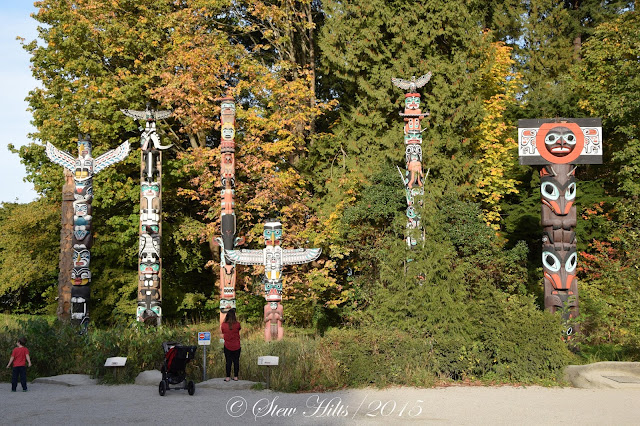 The totem on the right above and below is the Chief Skedans Mortuary Pole, carved by the great Haida artist, Bill Reid.  You can also see the famous thunderbird House Pole in the centre above (here the original by Charlie James, but widely replicated without approval or acknowledgement in tourist shops).  You can buy a tiny scale replica for $8.00 labelled 'Made in China' as a souvenir. 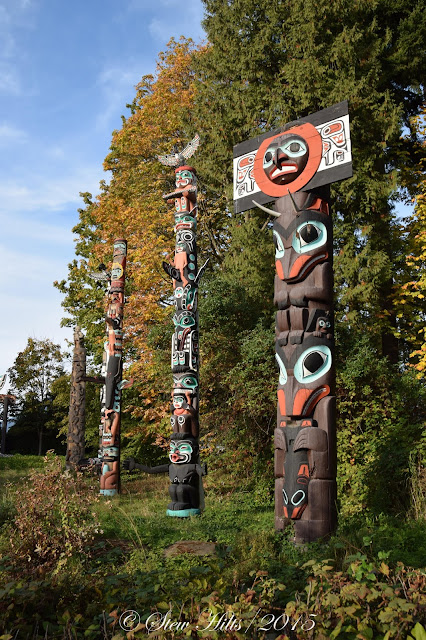 The totem below, the tallest of the group, is the Ga'akstalas Totem Pole, carved by Wayne Alfred and Beau Dick, depicting creatures illustrating the Kwakwada'wakw culture. 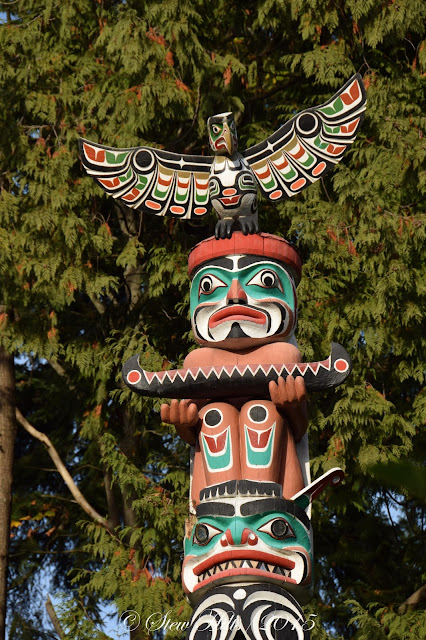 All these positive memories being said, there remains one very important negative one.  William went to school in Thunder Bay and first worked in Kenora, both towns with a high proportion of Indigenous people, too often on the streets.  I heard first hand about the 'drunken Indian'.
It was only when I started reading after William's death that I learned about the residential schools.  I then understood how several generations of children in a family being taken away to residential schools could destroy a person's soul.  Survivors could no longer fit in back home, but discrimination meant they could not fit into the white man's world either.  Generations of adults have simply been lost.
Tomorrow the Indian Act and the politics of destruction.