The Cliff and the View

The old homestead on the property I walked Monday was near the road, but at the opposite end, through the woods, most of an hour's walk, was the cliff, and a huge rockfall that occurred about 3 - 4 years ago.  You can easily see this bit of cliff, and the scar of the rockfall, from the roads below, or from across the valley.  I've wanted to find my way in to see them for a long time, so that was my destination. 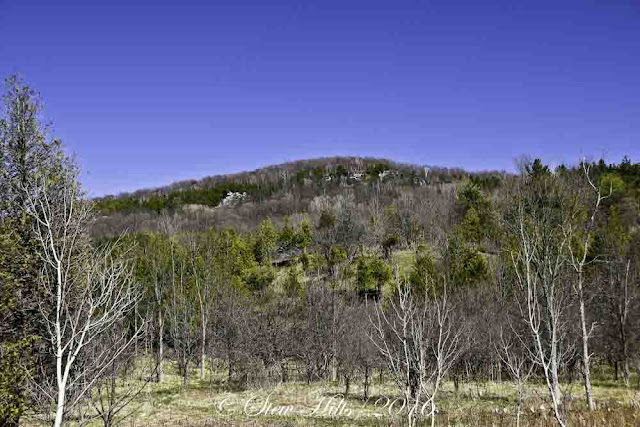 looking up from the road below, you can easily see both the outcrop of limestone of the cliff at the highest point, and the scar of the rockfall to the left. 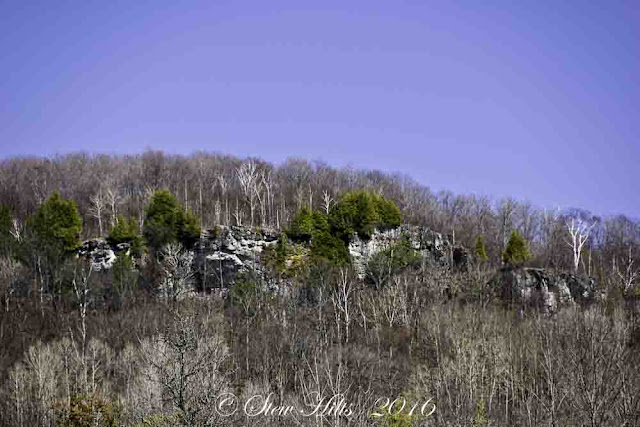 I've driven by below this bit of cliff for decades, since my first trip up here to go hiking in the 1960's, but I've never found my way out to it.  It's smaller than the well known Old Baldy cliffs about a mile north, and has no trail leading to it.  And it's on private land, but I'm friends with the landowner of the bush behind it. 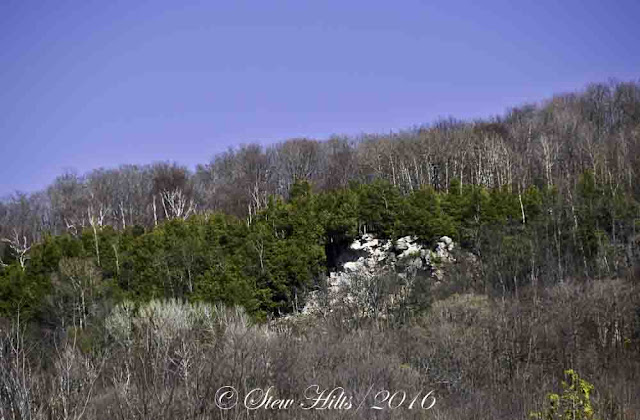 The limestone of these cliffs along the Niagara Escarpment is not 100% stable, which people often forget.  I've seen several places where slabs of rock have fallen down, but this is by far the largest rockfall I've seen.  The cliff already has deep crevices or cracks in the limestone, often 30 or 40 feet behind the front of the cliff, which are known as 'crevice caves'.  But here a big chunk about 6 feet thick appears to have cracked off and crashed to the slope below, taking the trees with it. 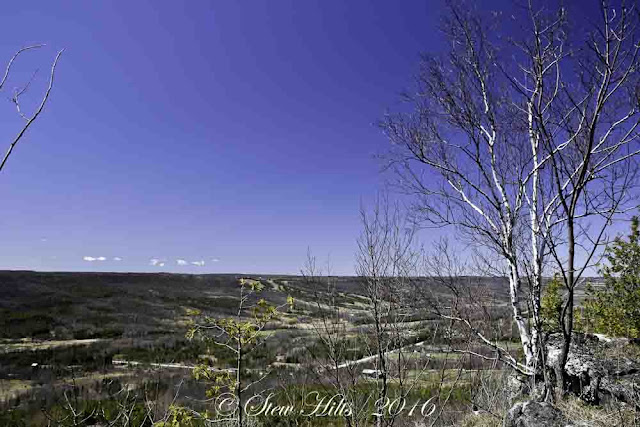 I did get all the way through the woods to come out and find both the rockfall and the cliff with a spectacular view of the valley, and I think this has suddenly become my favourite hike. 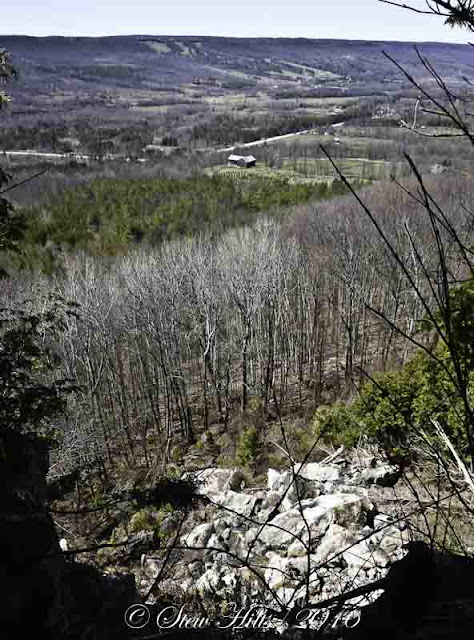 I was very cautious at the top of the rockfall, but looking down over the clff you could see the big pile of broken limestone at the top of the very steep slope below.  In the background are the former ski slopes of Talisman, and to the right along the road is the village of Kimberley. 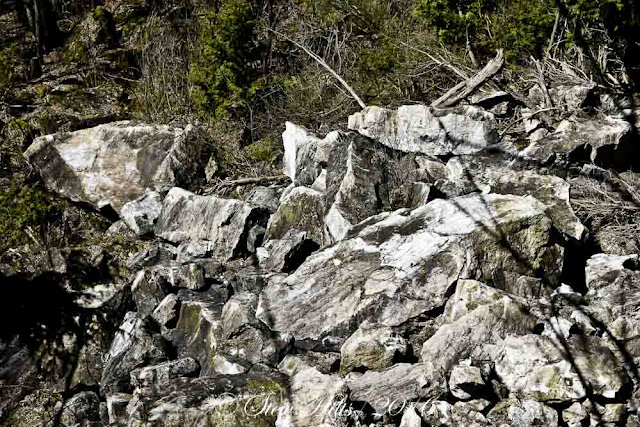 A closer look shows the size of the broken rock, some pieces bigger than a good-sized car, with broken trees underneath.  The white parts are where the rock has freshly cracked; the darker patches are lichen growth where the rock has already been exposed. 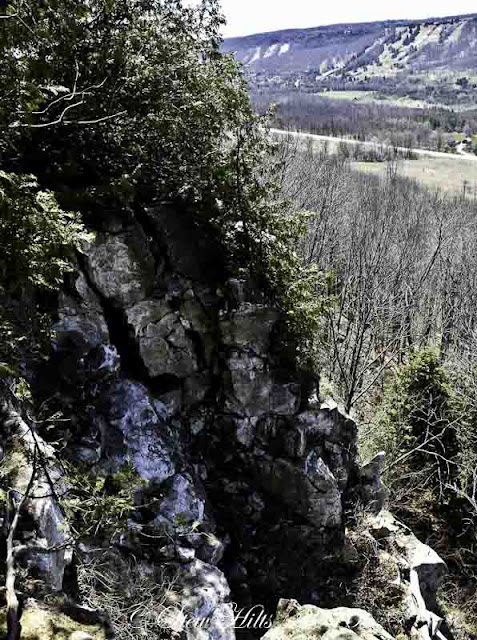 And a look at the edge of the cliff where the rockfall occurred shows how just how unstable and fractured the front face of this cliff can be.  This is partly exacerbated by frost action in the winter. 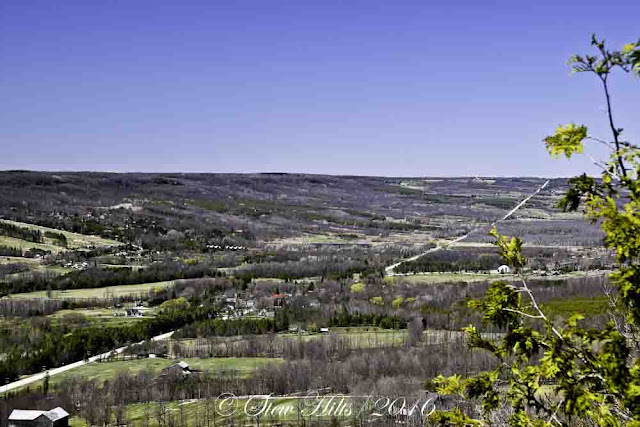 After finding the rockfall successfully, I walked a short distance south to come out at the more natural open cliff, and got a spectacular view up and down the valley.  This view looks north, with the village of Kimberley in the centre (one building has a new bright red steel roof).  In fact the view is better here than the view from Old Baldy, in the sense that you can stand in one place and look both north and south; at Old Baldy it's quite challenging to get a view south. 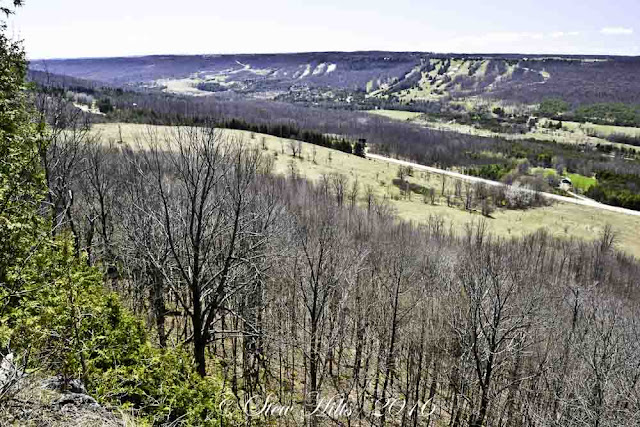 And this one looks south, showing the slopes of the Beaver Valley Ski Club, some still with patches of snow.   We live almost in the centre of that horizon above the main ski slopes, but half a mile back from the top.

Finally a picture looking directly across the valley, with a ski run or two of both Beaver Valley (on the left) and the former Talisman (on the right) showing up on each side.  The entire forested slope between those ski runs is the area known locally as Kimberley Forest, which I have written about in the past here.  Almost all of it is public land, with a small piece owned by the Bruce Trail Conservancy.