The first group of early spring wildflowers are in bloom, and I saw several yesterday and today.  The peak of the wildflower season here is Mother's Day, but the blooming period for spring ephemerals is spread out over about 3 weeks; this is the beginning. 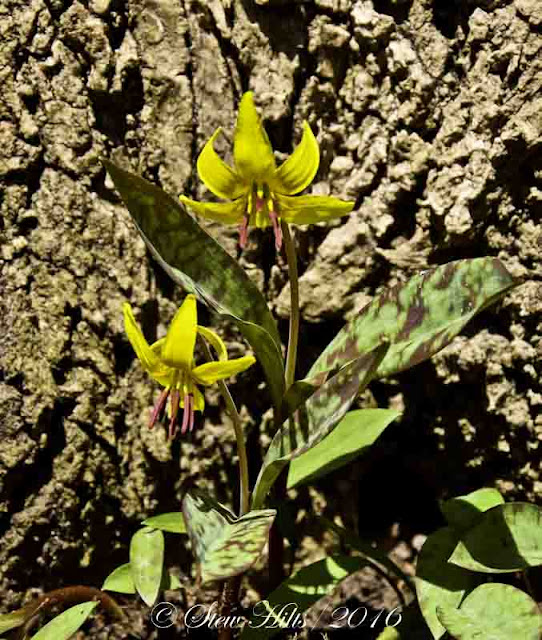 One of the most prolific, at least in terms of the leaves covering the forest floor, is the Trout Lily or Dog-tooth Violet.  Only a few leaves seem to produce a flower, but it's a pretty one. 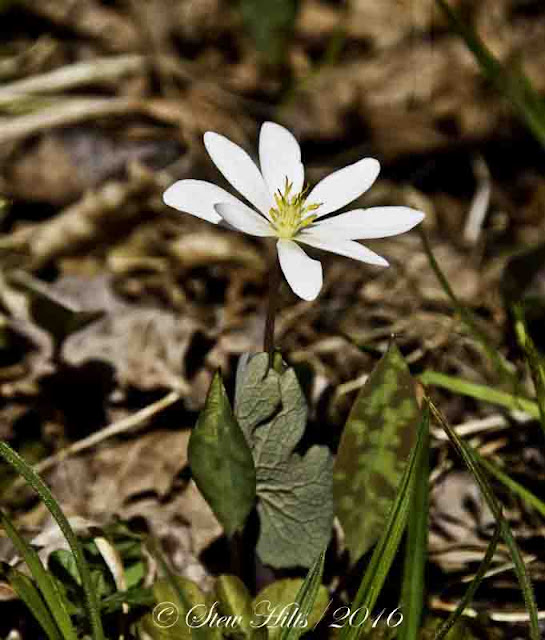 I saw my first Bloodroot here today as well, the leaf still clasped around the stem like a sheath (here partly hidden by a Trout Lily leaf).  That leaf will unfold and be quite large and shaped sort of like a hand later on. 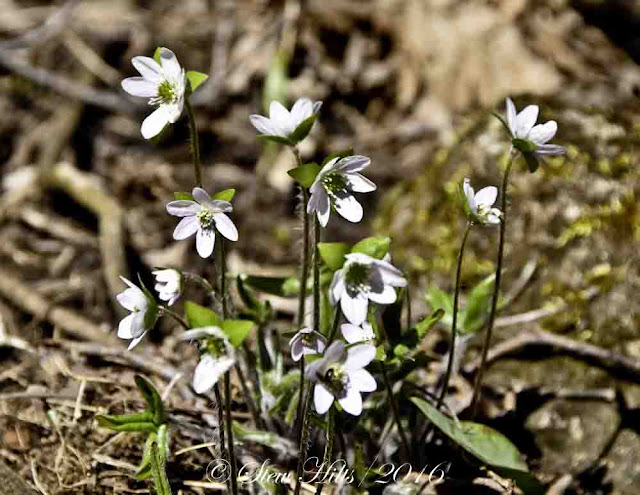 The Sharp-lobed Hepatica, which I think of as one of the earliest spring wildflowers, is still in bloom.  Now you can see it's leaves, which come in threes, beginning to unfold, for example in the lower left. 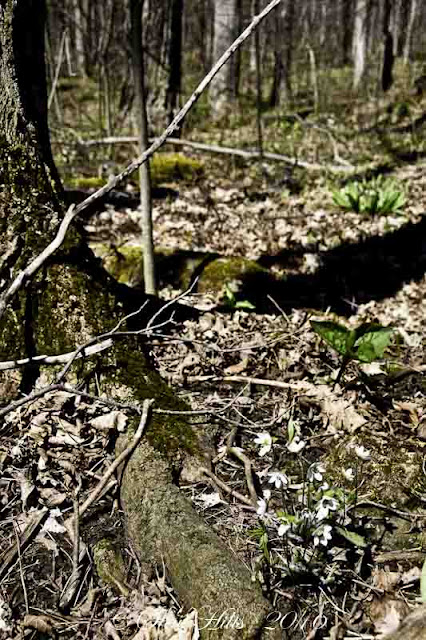 To put it in context a bit, here's the Hepatica on the forest floor, beside the root of a big Sugar Maple.  That's the leaf of a Trillium in the background, but no Trilliums in bloom yet! 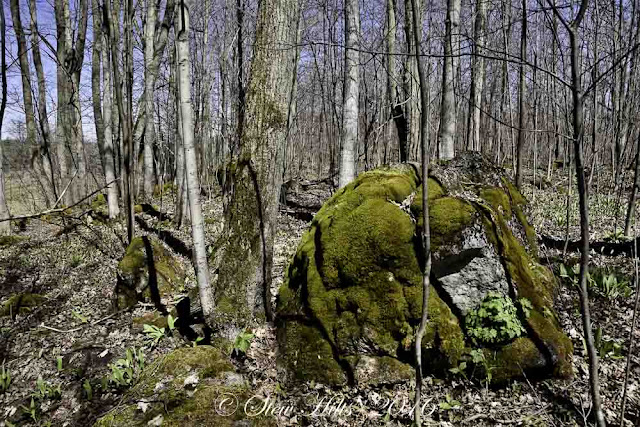 Another context shot - this flower was growing in a clump of bright green leaves on the side of a big mossy boulder. 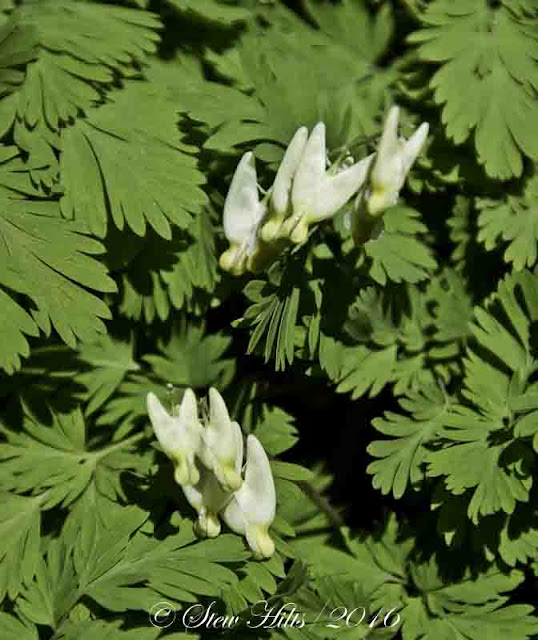 A close look reveals the flower of Dutchman's Breeches, with its soft green, delicately lacy leaves. 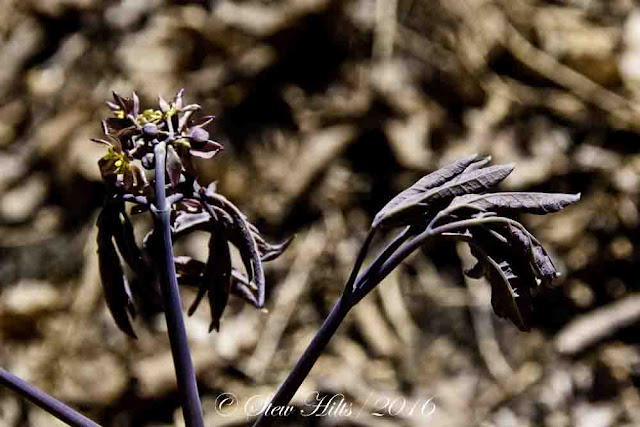 Here's another view of the Blue Cohosh I posted yesterday, showing the flowers (on the left) from the back.  There were so many of these across the forest floor I had to watch where I stepped.  And they're hard to pick out from eye height, against the old leaves and twigs. 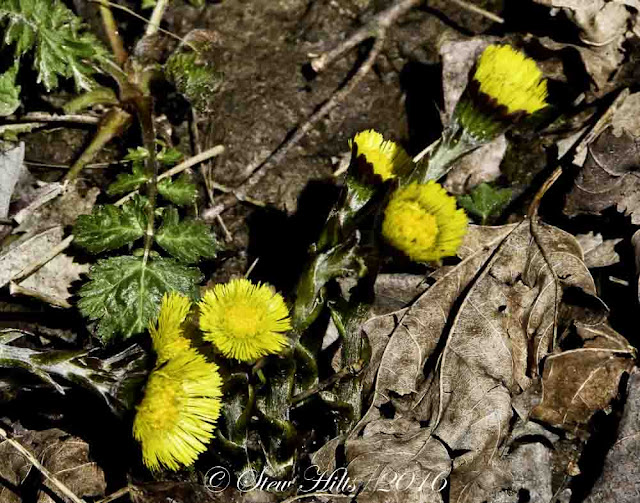 And of course there were a few Coltsfoot in the woods, though they're nearly finished now.  And they're more common in the open, for example along roadside ditches. 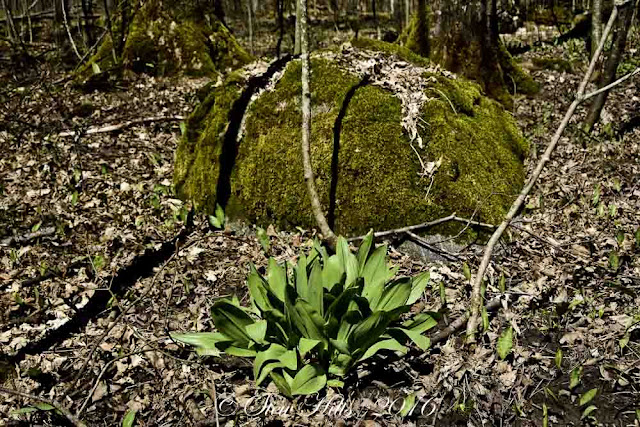 This isn't a flowre, but it's the bright green leaves of the Wild Leek; they come up to take advantage of this ephemeral sunlight before the canopy closes, and then the leaves die away.  But later in the season, a small spike of flowers will rise from the roots. 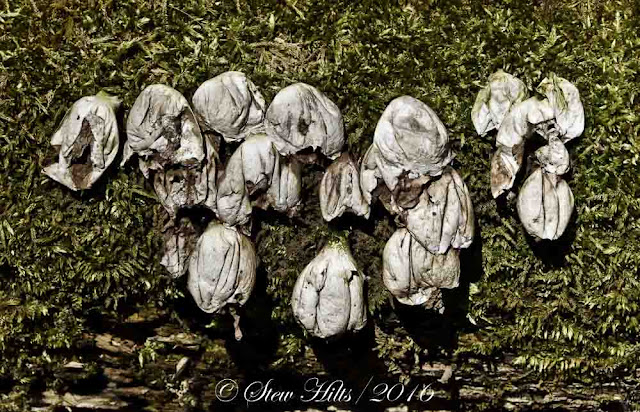 Spotted a few of these dried puffballs from last year, still clinging to mossy logs, but long since emptied of spores. 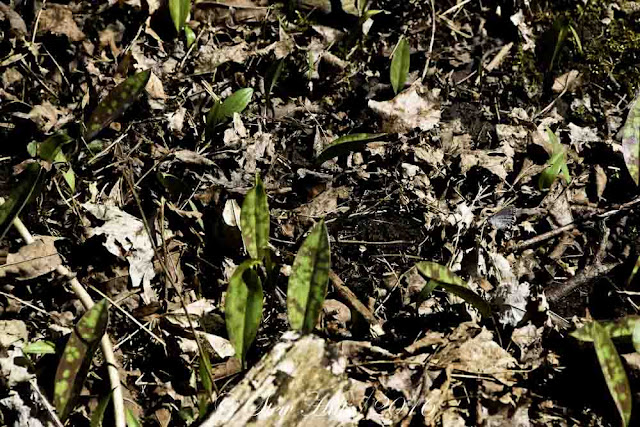 And here's a neat little forest butterfly, the bright blue Spring Azure.  Unfortunately the blue only shows when it's fluttering past, and its wings close when it alights.  Can you spot it?  (Centre right). 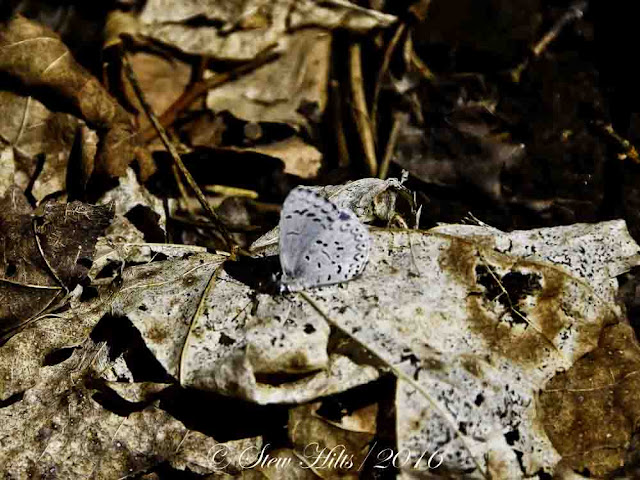 Here's a closer view.  One of our prettiest small butterflies when it's flying, but impossible to see when it lands, unless your eyes have followed it to its landing spot! 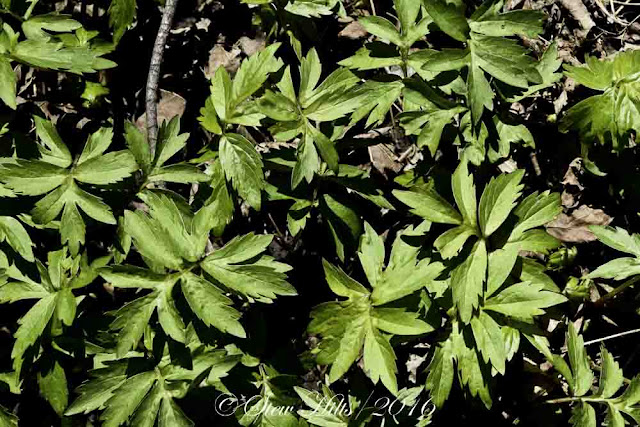 And can anyone help with these leaves?  I've seen these every year, usually in patches of 3-4 feet across, but I've never seen a flower, and never been able to identify it.  I'm wondering if it's a Wood Anemone, and I miss the flower because it's in the middle of mosquito season!

These are mostly from yesterday's walk, but today's walk was with our Photo Group, to Bognor Marsh closer to Owen Sound.  A cool but sunny morning, with lots of Tree Swallows buzzing overhead.  I'll get around to those pictures eventually!