Over the next few weeks of winter weather, I'm going to treat you to some garden pictures, at least on the weekends.  These are from the Life Long Learning Series I'm giving this month and next, but I'm drastically simplifying the story for these blog posts.  We're going to start with 'The Alhambra', in Granada, Spain, the oldest of all the gardens we've ever visited. 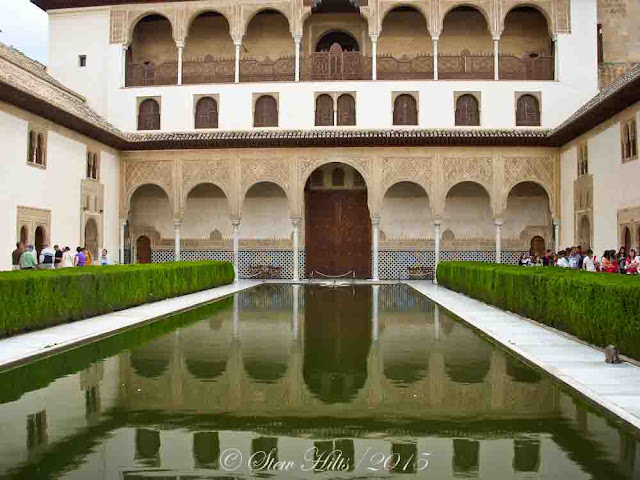 The gardens of The Alhambra are all about water - pools of water, running water, and fountains.  Created in the years following 1200 A.D. by the Moors of the Nasrid dynasty, these date from the centuries when Moors occupied southern Spain. 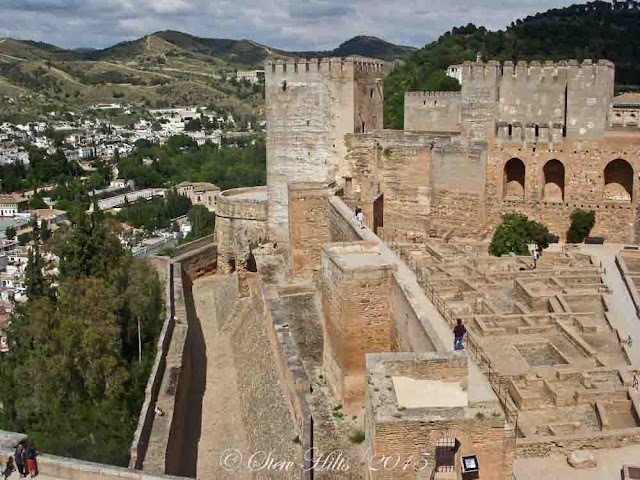 The Alhambra is actually a large fortress, on top of a hill overlooking the city of Granada.  But within the fortress are several beautiful courtyards, and more water features than you can count! 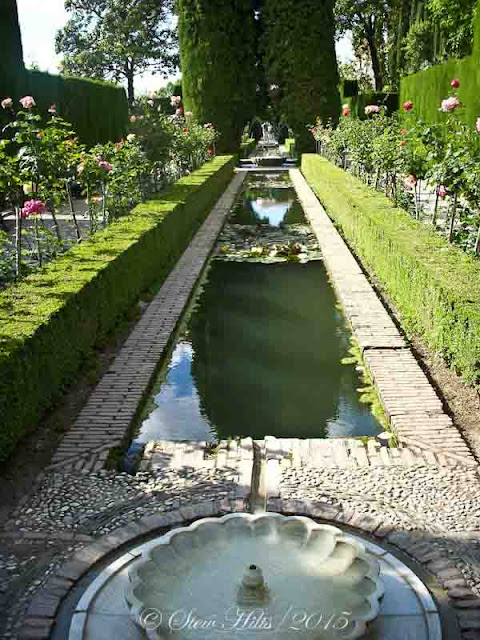 These gardens really aren't about flowers, though when we saw it there were Roses in many locations.  Instead they are about providing a peaceful retreat, in which the water is a symbol of purity and life. 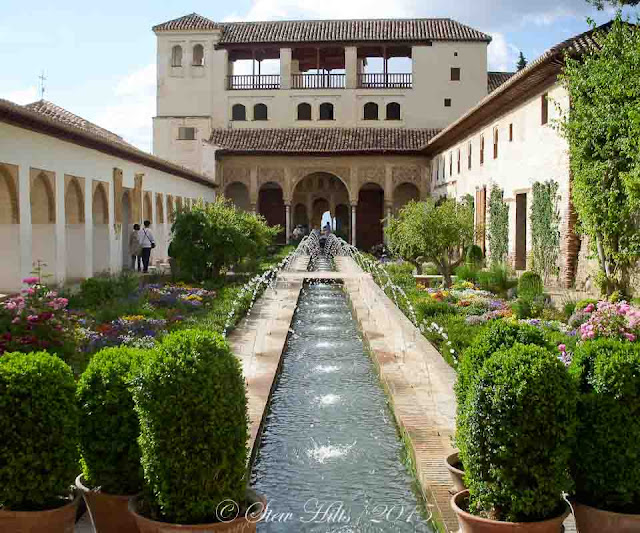 And all this water had to be brought several miles by canal, and pumped through the hill-top fortress to provide the basis for the gardens.  It's not surprising that in a dry land the royalty would like to retreat to a place like this! 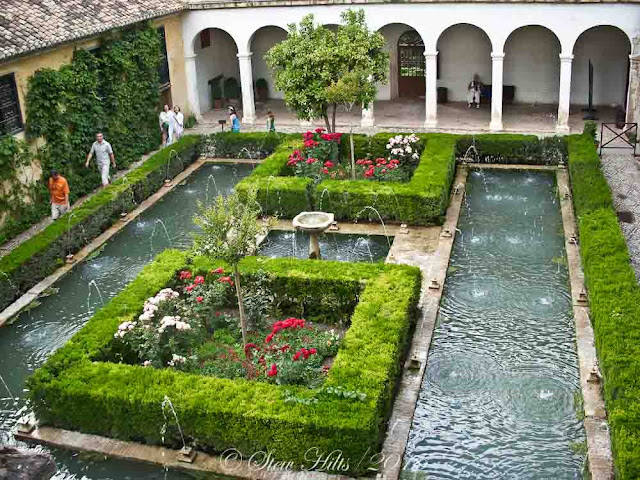 Gardens are recorded as early as 5000 years ago, and originally had a very strong spiritual meaning, in both Christian and Islamic traditions.  The pools, fountains, flowers and fruit trees all reflected 'Paradise'. 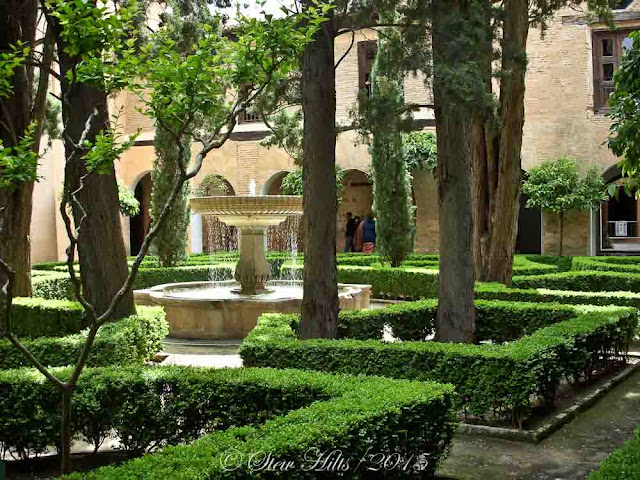 This is one of the most beautiful courtyards of The Alhambra.  In Christian tradition early gardens go back to the Garden of Eden; in Islamic tradition, the central fountain reflects the divine gift of water in the desert. 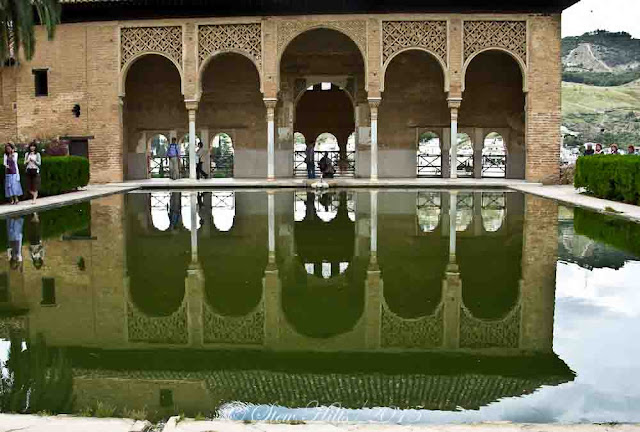 In any case it was a stunning place that let us experience the closest thing we've come to the historical routes of today's garden traditions. 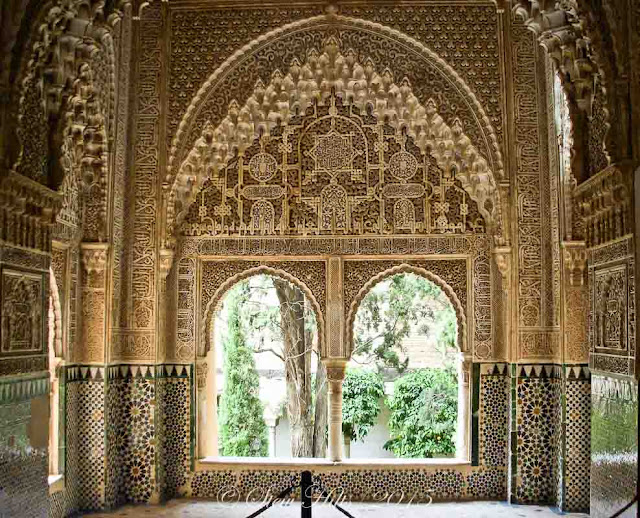 In fact, The Alhambra is even more about architecture than gardens.  It is a World Heritage Site, and is considered the best example of Moorish architecture in Spain.

A quiet day here after my tiring 2 hours skiing yesterday!  The temperature crept above freezing for awhile, but we didn't get the freezing rain that was forecast.  Radar shows another Alberta Clipper headed our way tonight - I wonder how much snow we'll get?
Posted by The Furry Gnome at 7:17 PM