Beyond the ancient model of the 'Paradise Garden' in both Christian and Islamic tradition, the other often-cited early precedents for today's gardens are the monastery and castle gardens of the Late Middle Ages.  We haven't had a chance to visit many of these, but here are two examples. 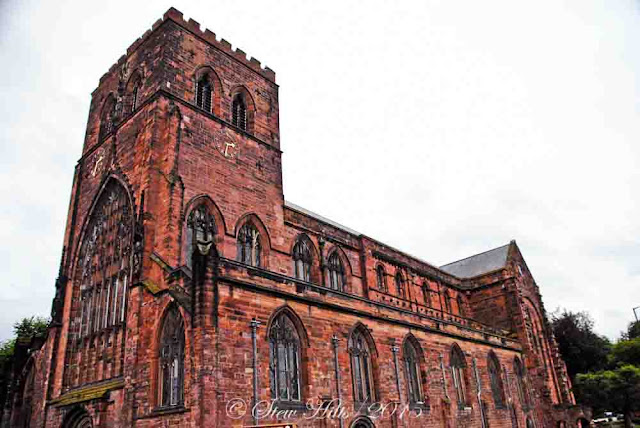 The first is the ancient Abbey Church of St. Peter and St. Paul in Shrewsbury, England.  Built in about 1100 AD, you may know it as the monastery where Ellis Peters set her Brother Cadfael series, one of my favourite mystery book series. 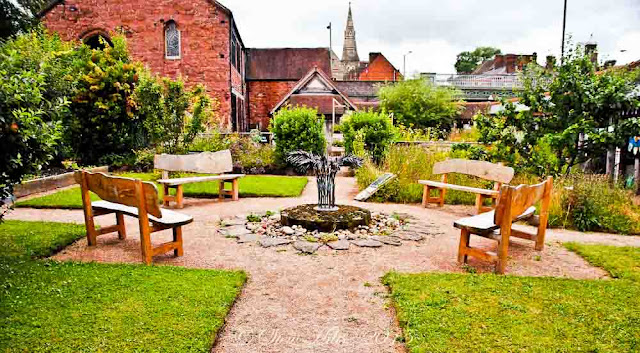 There are no extant actual monastery gardens with plantings that date from the Middle Ages, but this shows the 'four-square' pattern that is said to have often been used, today a small park across the street from the Abbey.  Brother Cadfael, a monk in the 1200's, helped care for the abbey gardens, so if you've read Peters' stories you'll have a sense of how monasteries kept alive the art of gardening during those turbulent times. 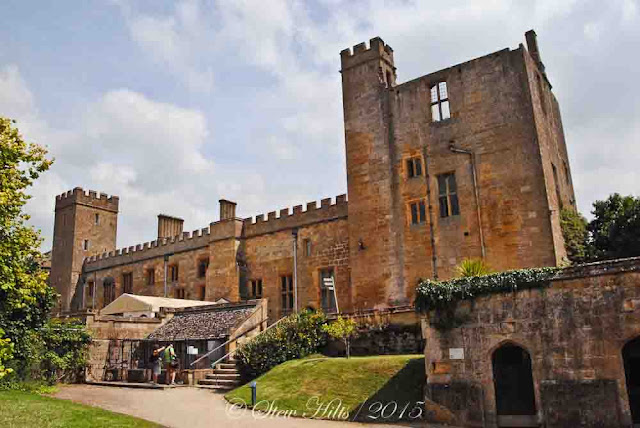 A little later came the Tudor age, and the many castles associated with it.  This is Sudely Castle, one of the few private castles still lived in by the family, the Ashcombes, though they have opened it up to tourists to make ends meet, like the owners of many large English estates.  It's quite a popular place for families to visit. 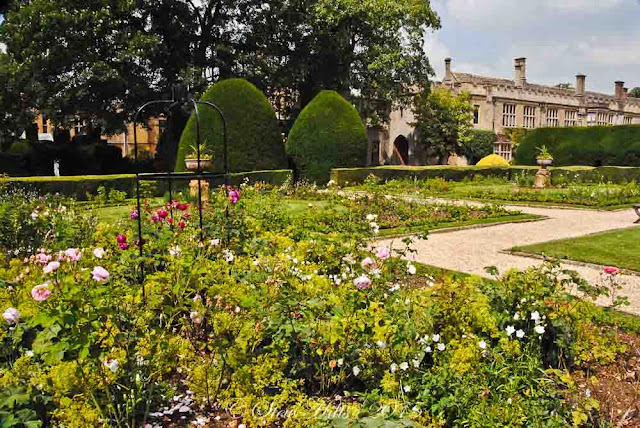 Sudeley is known for the 'Queen's Garden', a beautiful Rose Garden so named because four different queens of England spent time here, including Anne Boleyn, Katherine Parr, and Elizabeth I. 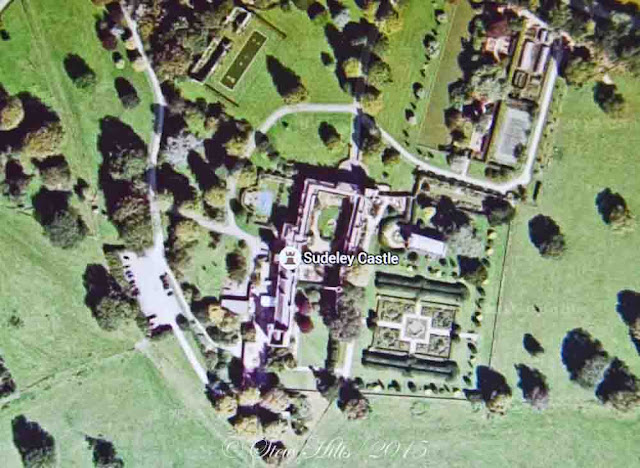 You can't recognize the 'four-square' pattern of the rose garden easily from the ground, but this satellite image clearly shows the pattern - the square in the lower right, bordered by two large hedges. 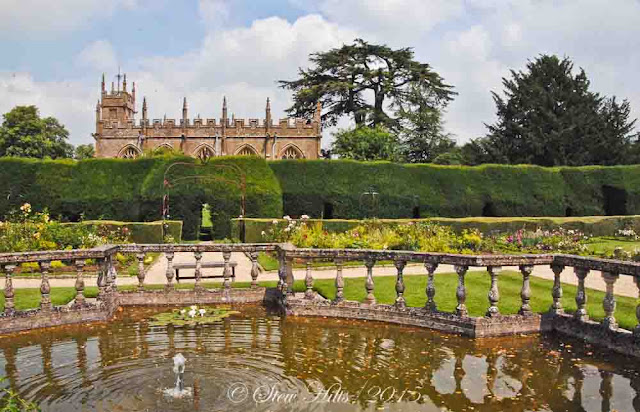 The centre is a pool with a small fountain surrounded by a balustrade, the chapel in the background. 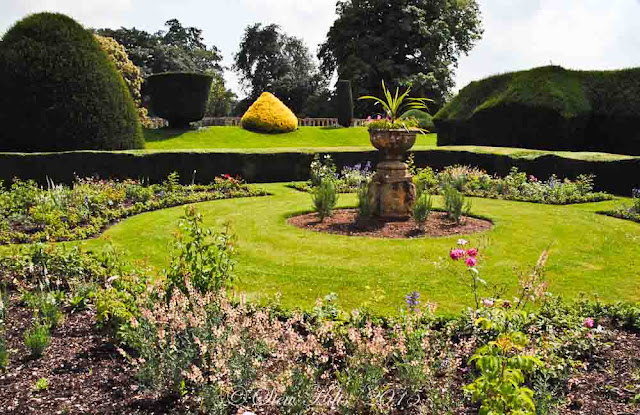 This is one of the four corners of the garden, each with its own large vase.  Anne Boleyn was just a visitor here, with Henry VIII, in about 1535, but Katherine Parr lived here after remarrying for a short time in 1548, before dying in childbirth. 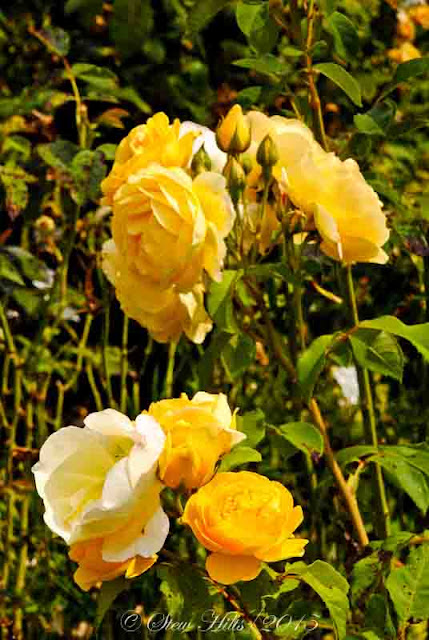 Katherine was one of only two wives who outlived Henry VIII, and she befriended his daughters, especially Elizabeth, the future queen, who came to live at Sudeley for a time with her at about age 15.  His other daughter was Mary, who has come to be known as 'Bloody Mary'. 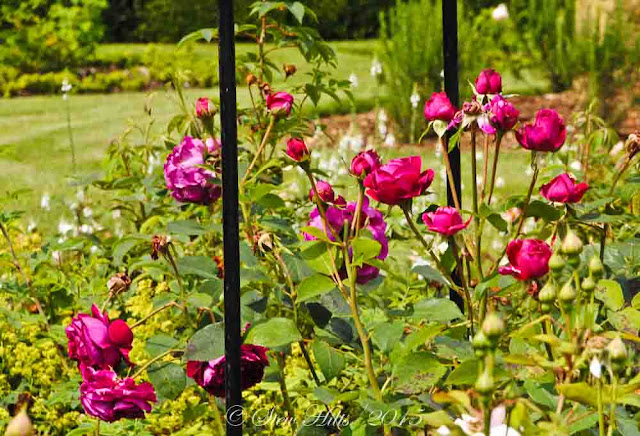 We have no reason to think this garden has changed much apart from the plants being renewed since then.  You can almost picture the Dowager Queen and the Princess walking among the roses. 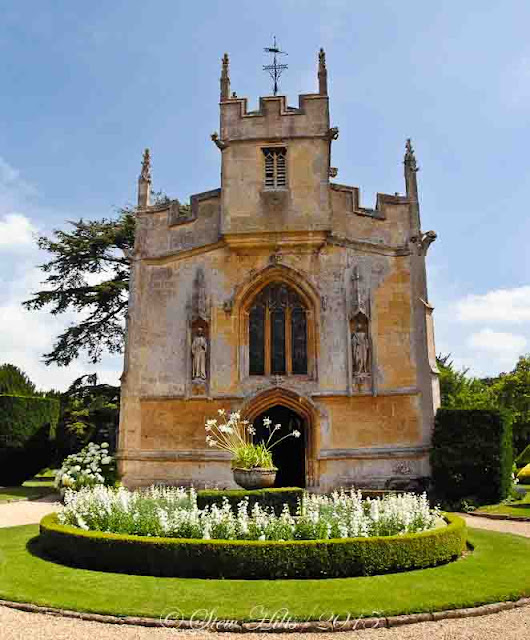 The small chapel itself is quite beautiful, both inside and out. 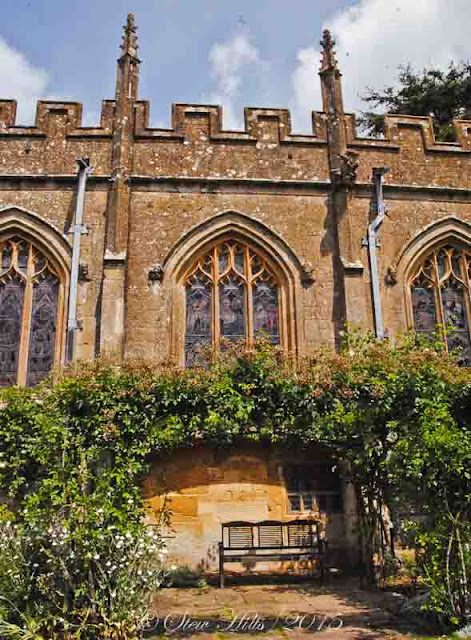 Originally it had a seperate boxed in pew for the Queen, where she could sit, see the front of the church, and listen to the service without being seen in public.  This is now displayed as a small alcove featuring a window in the outer wall of the chapel, known as a 'squint' or 'hagioscope'. 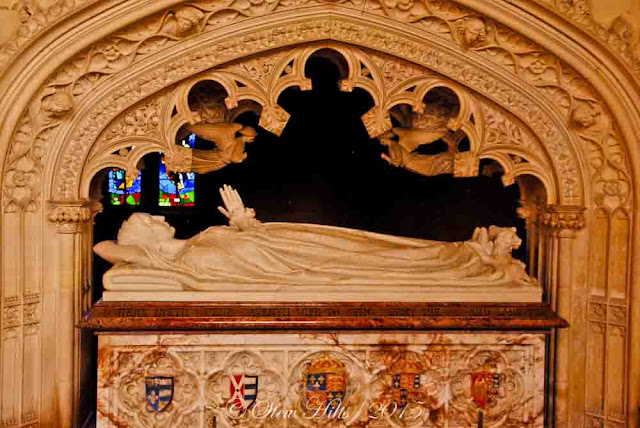 And inside is Katherine Parr's tomb. 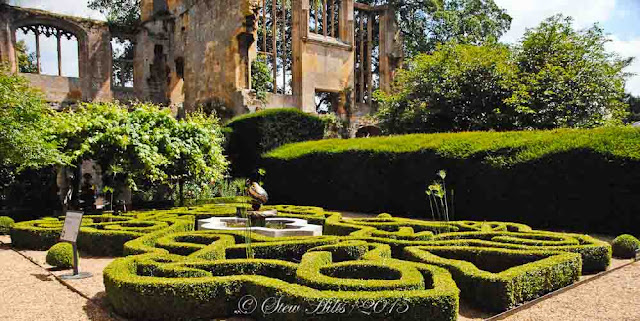 As well there is a beautiful knot garden outside the castle, said to be designed after an embroidery design in one of Queen Elizabeth I's dresses which is exhibited inside the castle.  As you can see, a portion of the old castle is in ruins after a fire.

Together, the early example of The Alhambra in the Islamic tradition, the monasteries of the Middle Ages, and the early castle gardens provide the foundation for more modern gardening traditions.  Next week we'll jump ahead to the Renaissance and the formal gardens of Italy and France.

Correction - as John pointed out in the comments below, Katherine Parr was not the only Queen to outlive Henry VIII.  I have corrected the text above, and here are the facts.  Though the story of Henry having Anne Boleyn beheaded has coloured our view, only she and Catherine Howard were in fact beheaded.  Catherine of Aragon lived on for 3 years after being set aside for Anne Boleyn, as Dowager Princess of Wales, Jane Seymour died of complications in childbirth (but did give Henry his only son, Edward, who survived), and his marriage to Anne of Cleeves was annulled.  She in fact lived longer than any of the wives, outliving Henry by 10 years.