The Beaver Valley features 3 or 4 old bridges over the river in the main part of the valley.  Two of them failed this summer, so only one of the old iron bridges remains carrying traffic - though there's also an old one on a now unused road allowance. 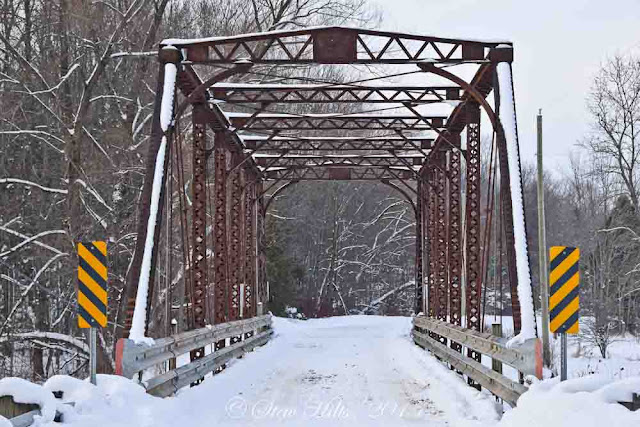 This is the old iron bridge that still carries traffic.  And it's the 'flower bridge' in the summer.  I must try and dig out my pictures of it. 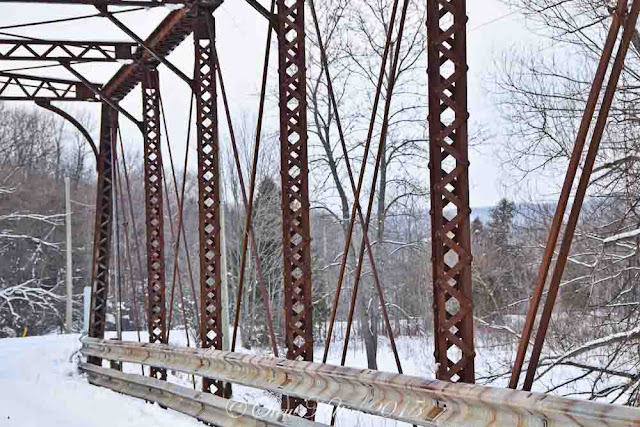 Large hanging baskets of flowers are hung between the uprights of this bridge, contributed by a nearby garden centre.  Good reason to love this old bridge, part of our township's heritage.  I love the criss-cross iron work. 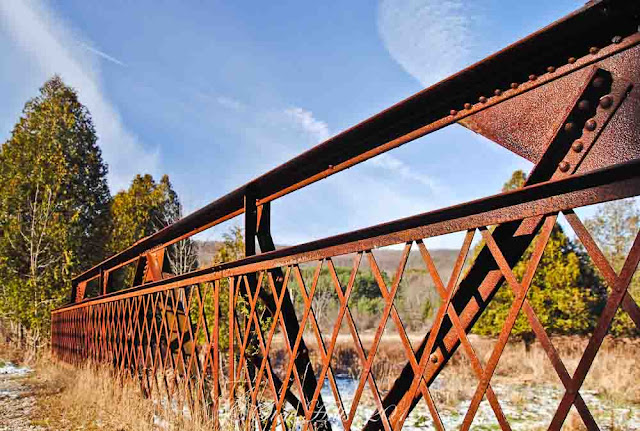 This is the other old bridge still spanning the river.  It's only used by snowmobiles and pedestrians officially, but I suspect hunters occasionally drive in here.  I like the old rivets holding these bridges together. 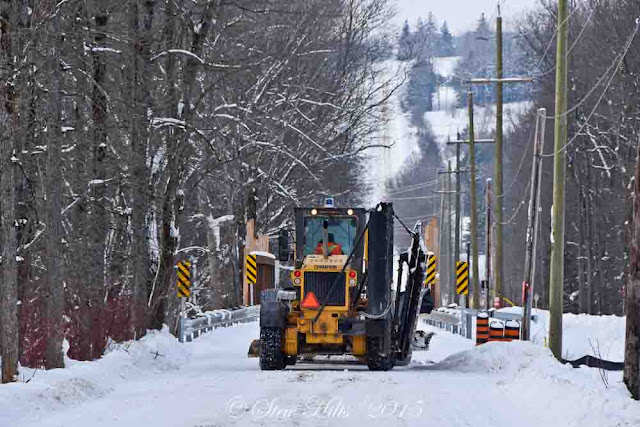 I drove down another sideroad to see the new bridge that has replaced one of the older ones, just about 3 weeks ago.  The road was closed for about 8 months.  And at the moment I had to wait for the snowplow, who had to raise his wing-blade just to get through the bridge. 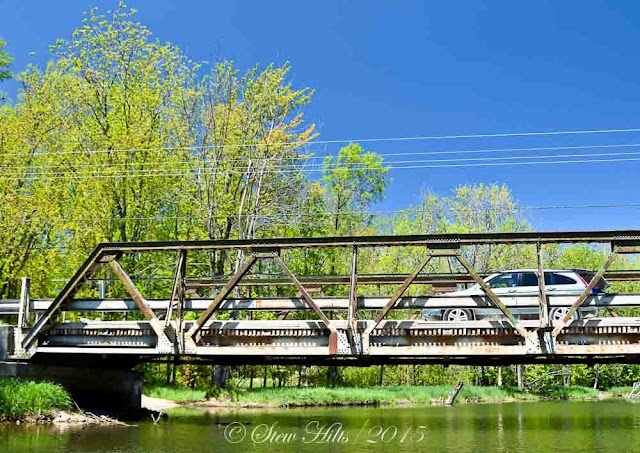 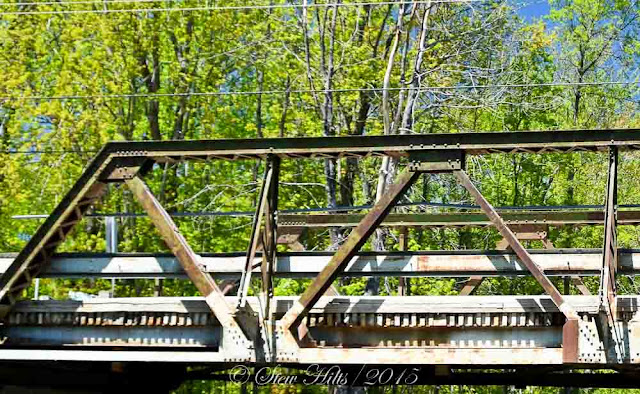 Here's the old bridge before it was condemned, taken when we canoed down the river last spring.  Look closely and you can see those old rivets. 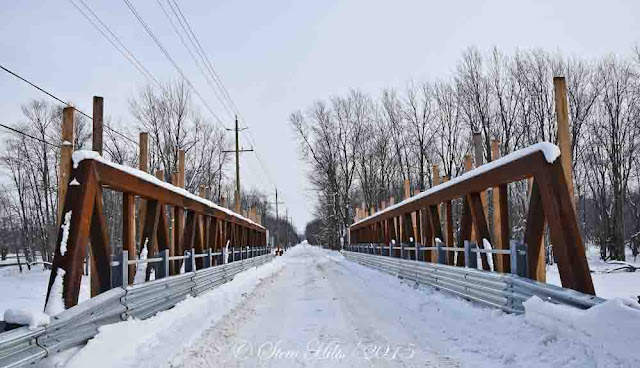 This is the new bridge, no rivets in sight, all welded steel construction.  The old bridge was lifted out in one piece by a huge crane, and this bridge, built elsewhere arrived on one side of the river on a huge truck, which had to back down about a mile of valley sideroad to get in position. 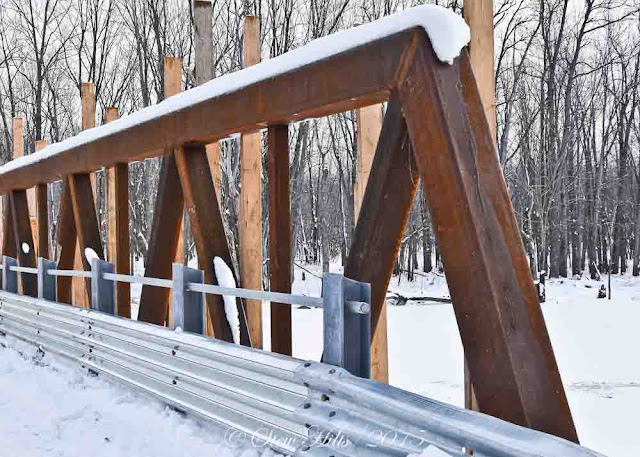 A crane was waiting on the other side of the river, and slowly they inched the bridge off the truck, the crane holding the other end up, until they had it in place across the river.  I wish I had been there to see it!  I don't know what the wooden pieces are, maybe something they have to finish next spring. 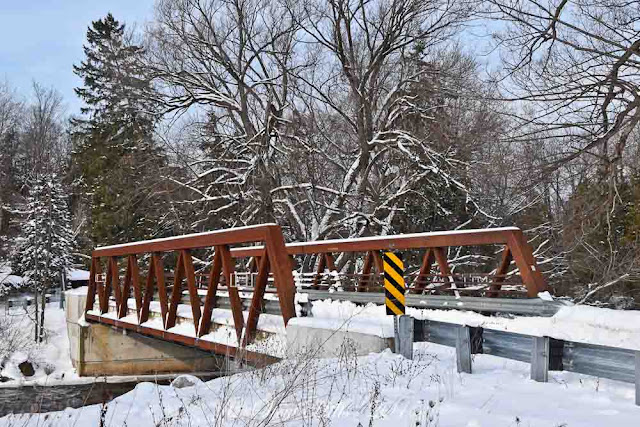 This is a another new but much smaller bridge at Slabtown, further downstream, where they similarly brought in a crane and lifted it into place in one piece.  I've actually seen a video of that operation - really neat! 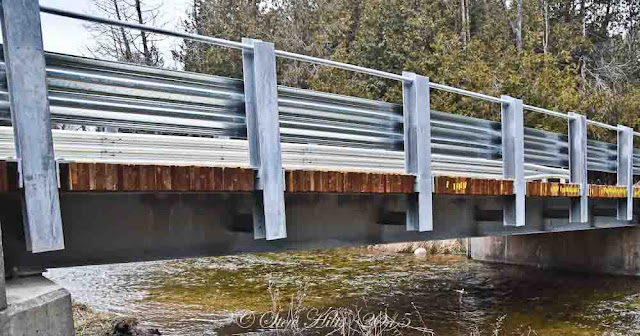 And there was one other old bridge that I believe actually collapsed last spring, and was replaced.  A quite different style of construction. 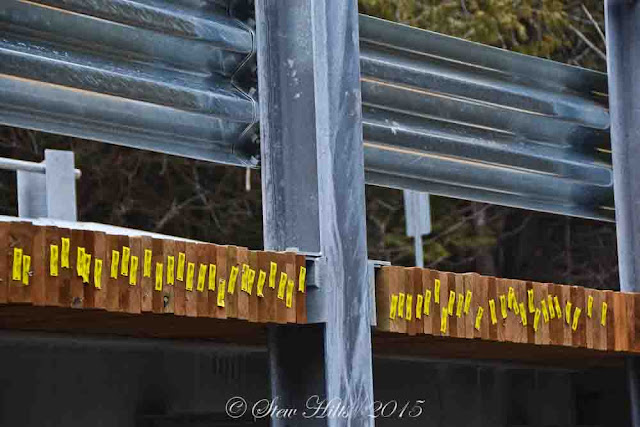 The deck is vertical 2x8 boards, but somebody didn't bother taking the price tags off all the boards!  Old bridges are an interesting bit of our landscape, but now there's only one of the really old ones left in use.

Been busy, both trying to get out on snowshoes or skiis, and doing my Life Long Learning Series, which seems to be going very well, even though it's taking a lot of work.  I got more than my target 1 hour/day of walking/snowshoeing/skiing in last week, and so far this week I'm doing well.  Enjoyed a brisk 1.5 hour ski today on the Glenelg trails with another group, and the trails were in excellent condition!  I'm anxious to go back by myself with my camera.