The gardens I've shared so far were all built at a particular time, and in a particular style, and they have been maintained more or less as they were created.  But Chatsworth is an example of a garden that has been around for over 400 years, and been constantly changed and added to, so you have quite a collection of garden features. 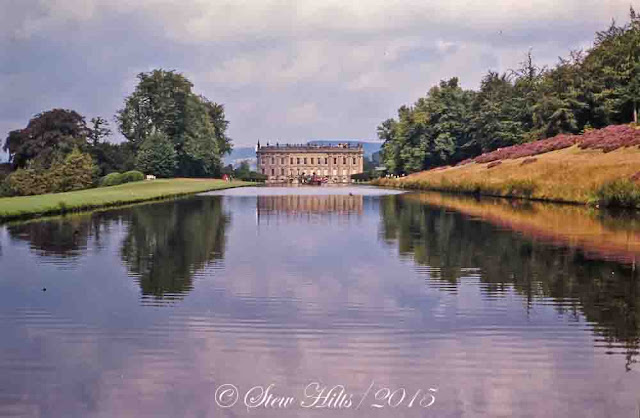 Chatsworth House is the epitome of the large English rural estate, and both the house and the garden are one of the most popular places to visit in England.  Built originally in the 1500's, it's been in the Cavendish family ever since, a family known as the Duke and Duchess of Devonshire - now the 12th generation. 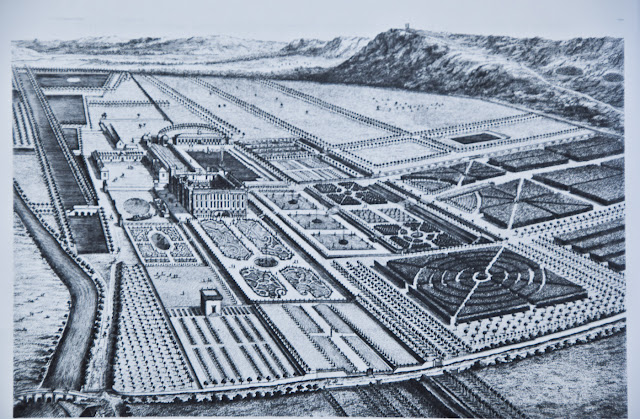 At a very erly stage it had the same sort of formal gardens that Versailles and many other Renaissance gardens did.  This old drawing is about the only evidence of those gardens left. 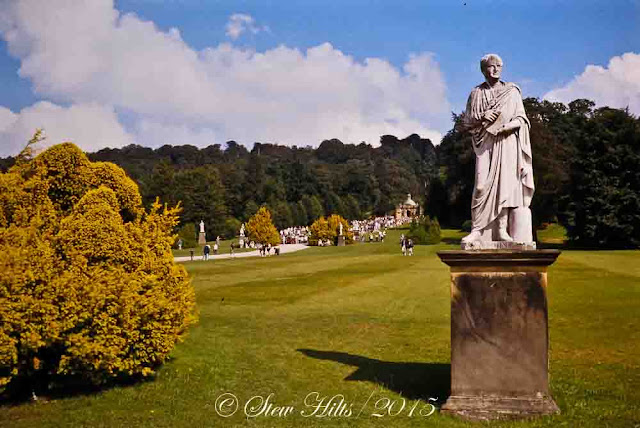 Along came Capability Brown and the new ideal of the English Landscape Garden, and wiped out all those formal gardens, and all the flowers, and replaced it with acres of green lawns - though most of the statues seem to have been kept. 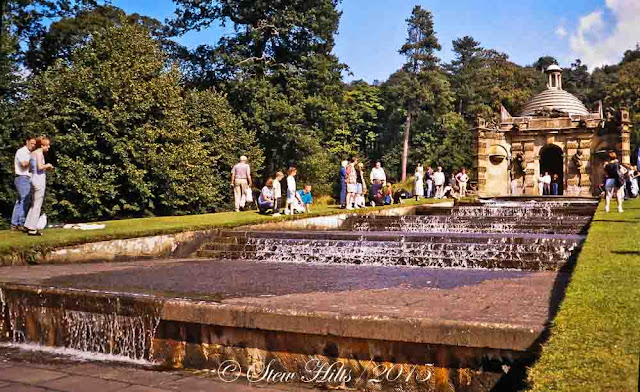 Chatsworth is known for its water features, and this is the most interesting of them - the Great Cascade, actually built in the 1690's, and restored recently.  It's said to be the top water feature in any English garden. 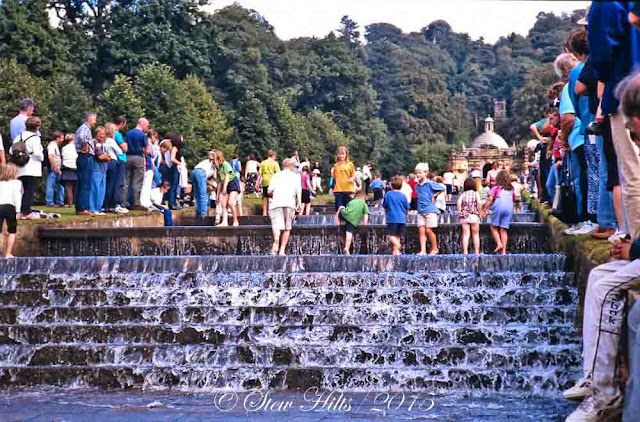 Water supply is a critical issue, and remarkably the water features here are all fed by gravity.  They just turn on the cascade at certain hours and as you can see, everyone gathers around to see it cascade down over the steps.  We continue to be amazed at the number of families with young children you see visiting British gardens. 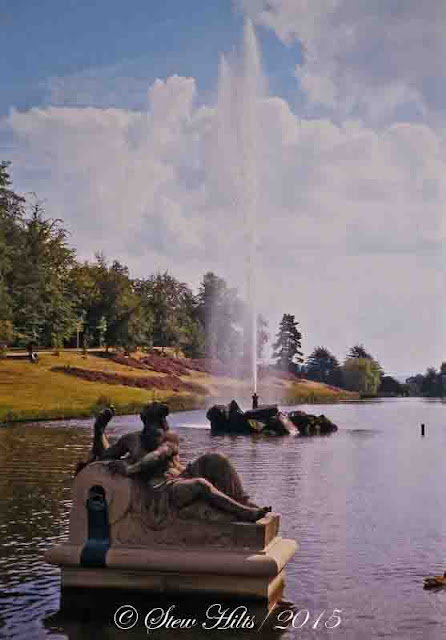 The Emperor Fountain is the other big feature, the highest gravity-fed fountain in the world when it was built.  And here the water actually generates hydro while it's running down the hill! 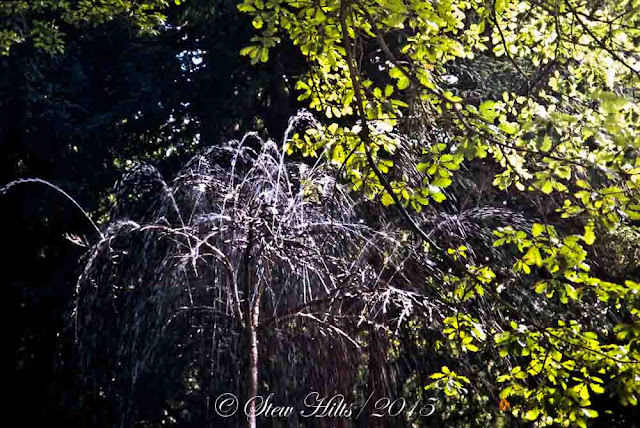 There are lots of other interesting little fountains, like this copper tree spouting water from the branches, and surprising you if you're not expecting it! 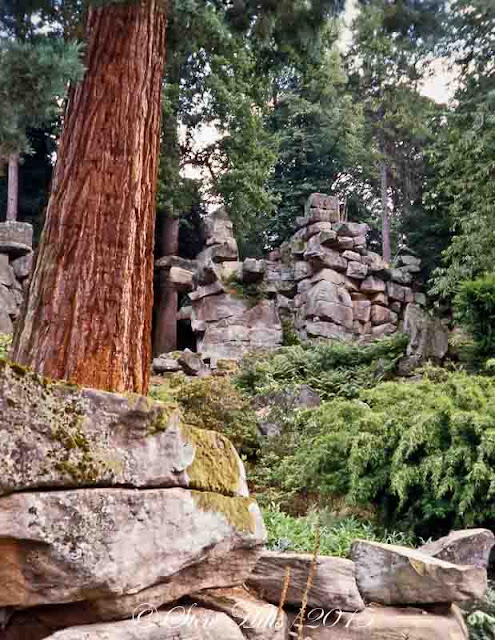 There's a huge rock garden, with enormous boulders.  How they built it I don't know!  And lots of huge trees, usually imported from the Americas in the early 1700's, during the heyday of plant collectors roaming the world to find new species. 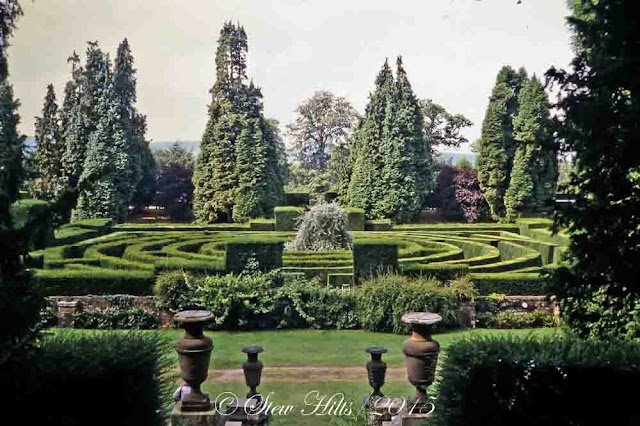 But there are also modern features too, the 11th Duk and Duchess having been very active in managing the property, opening it to the public, and making it a profitable business, thereby keeping it in family hands.  The 11th Duchess Deborah, who was the leading spirit of this, just died in 2014; she was the last of the six notorious Mitford sisters - look it up if you're interested. 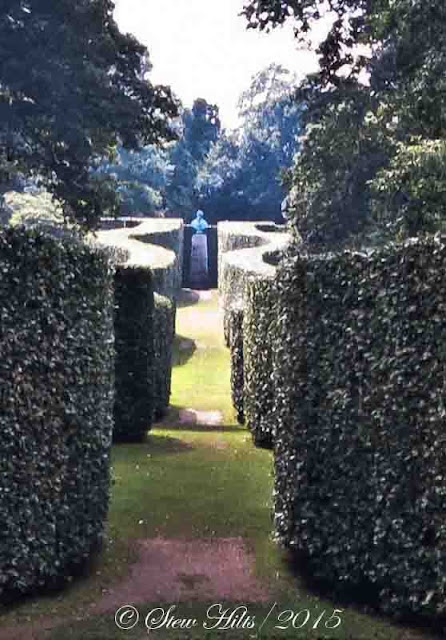 I particularly like this serpentine hedge that they planted in the 1950's. 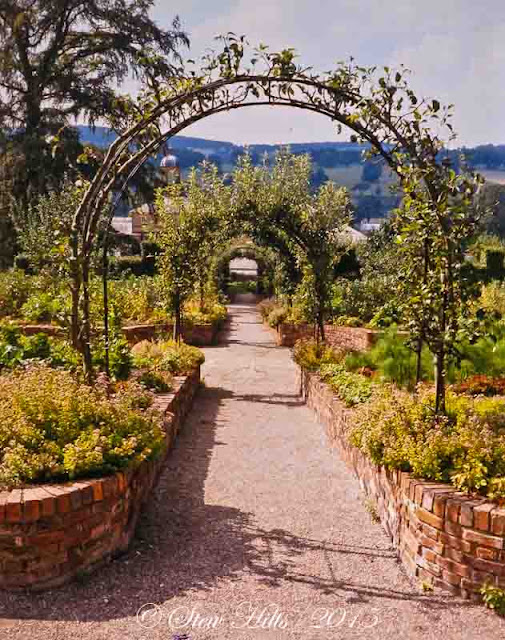 The Duchess also introduced a large new veggie garden, a farm shop, and a farm brand.  After facing an enormous tax bill in 1950 when the 10th Duke died (he was married to one of the Kennedy sisters), they have revolutionized how this big family estate works, and set an example that is widely emulated for sharing your home with the public.  A very popular place to visit.

As you can see, my computer connected fine this morning - don't ask!