Feeling a little sorry for those of you who live (or migrate) further south, so I thought I'd share some simple pictures of our world today.  We now have 8-10" of the white stuff, and woke today to bitterly cold -20°C (-4F), with a strong breeze out of the northeast.  But it was partly sunny and bright. 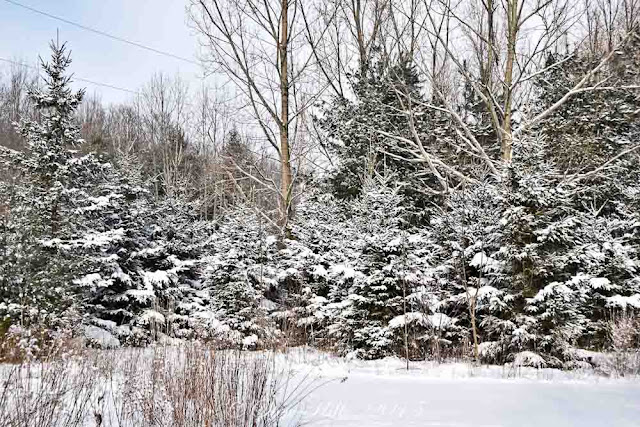 Right in our own front yard, the spruce were starting to look wintery.  We've had much more snow drowning the trees in past years, but we'll probably get there again soon. 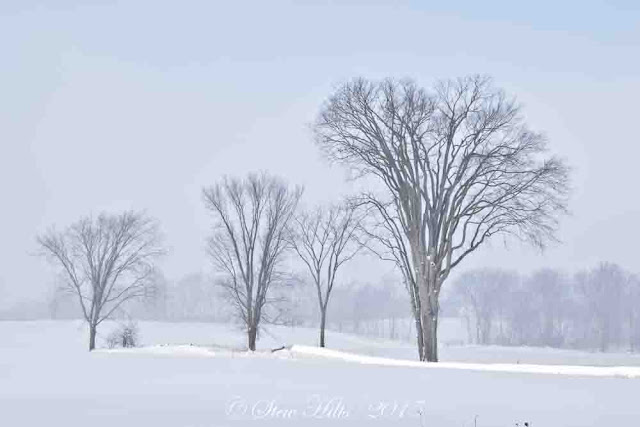 I was headed to Meaford for coffee, and the air was hazy with floating frost crystals as the sun faded in and out.  It wasn't really snowing, but it wasn't clear either. 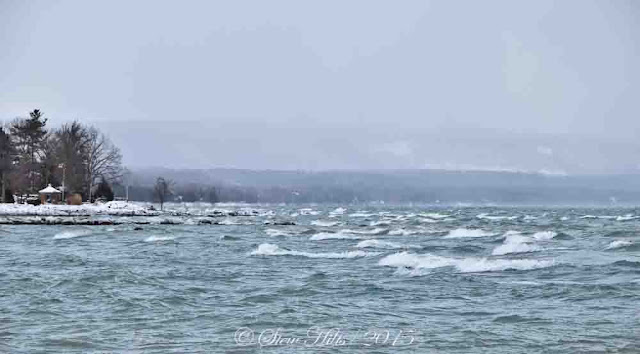 In Meaford that northeast breeze was driving the waves off Georgian Bay onto the shore as much as I've ever seen.  But all morning I had the camera on the wrong setting (after taking pictures of that waterfall the other day), so the pictures didn't come out nearly as nicely as I hoped.  Though the haze in the atmosphere also blurs the distant picture. 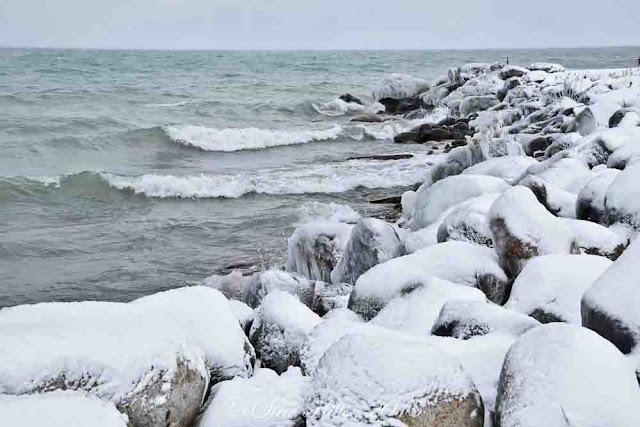 You can easily see how the rocks along the shore get quickly coated with a layer of ice when waves like these are rolling in! 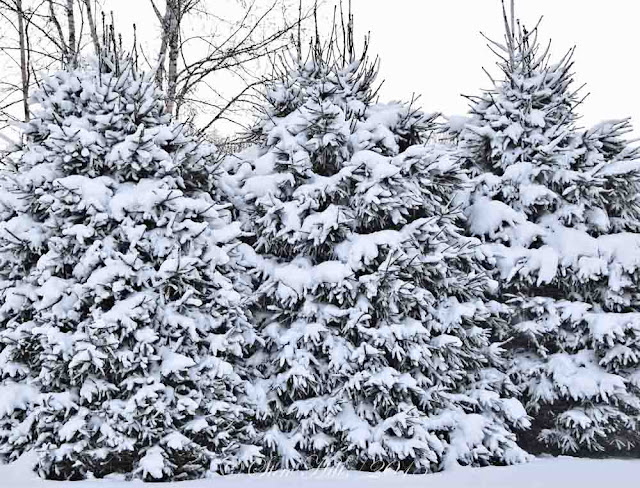 On the way home I saw lots more trees laden with snow; in sheltered spots they were very white. 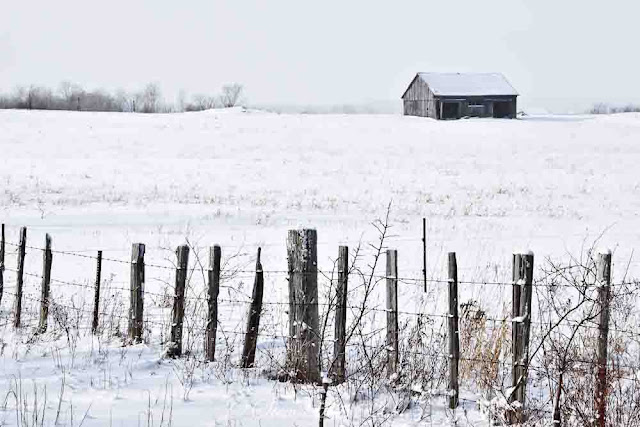 And I stopped to get pictures of my favourite small barn, all by itself out in the field. 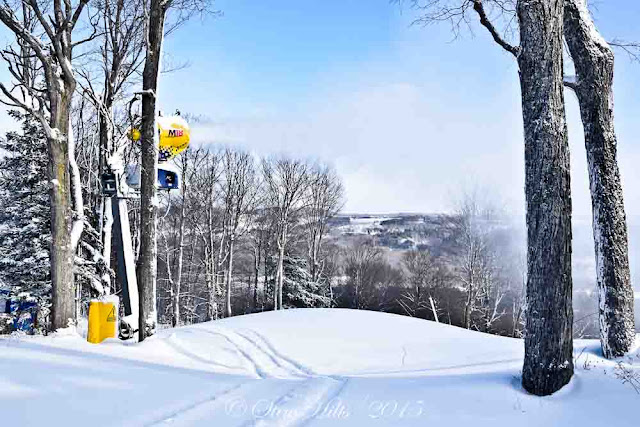 Out of interest I checked into the ski club, which hasn't been open yet, to find them making snow as fast as they could.  The air over the hills was foggy with blowing snow.  After our long snowless December, I suspect they'll finally be able to open this weekend.   Here's hoping the cross-country trails won't be long behind! 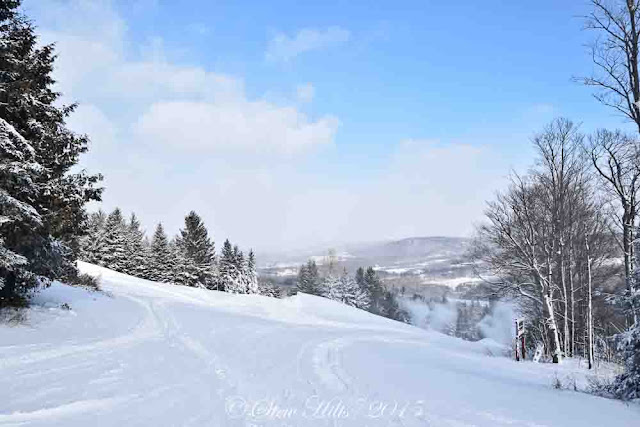 The sun mostly broke through for a minute, and you can almost make out Old Baldy in the haze over the ski runs. 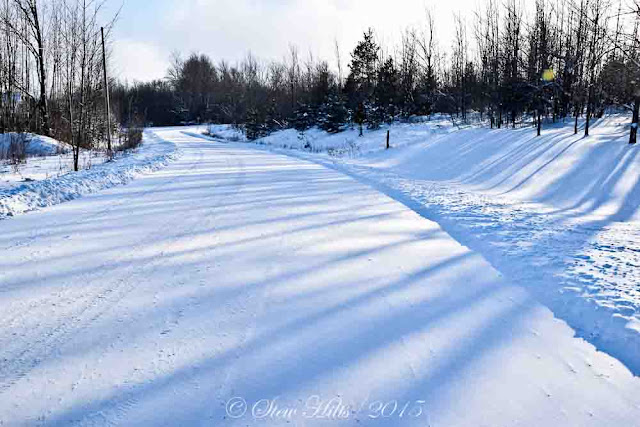 And by the time I was home, the bluish shadows were stretched across the road in the late afternoon sun.

Woke to a surprising -20°C this morning, as a cold air mass has moved in, pushed by northeast winds, for at least today.  It's -22 and dropping as I write this, but it's not supposed to stay this cold, and the forecast even says a little rain by Friday (here's hoping not!).  The long term forecast though shows snow and 'seasonal' temperatures (-8 to -15) every day next week!  Yeah!

DJan reminded me that I forgot to post my walking report yesterday, so here it is.  I did manage to walk one hour every day all week, though that includes using the stationary bike twice to make up the time.  Now that snow is here, I have to get in to the swing of new activities.  Suddenly the snowshoeing group and the cross-country skiing group are both starting up, and those are the ways I hope to get my winter exercise.  But you have to commit to it between 10 and 2 or so, otherwise it just doesn't happen.  You can see why I wish for more snow.