We were on a photo walk 18 months ago when a friend showed us how to photograph waterfalls.  Just as you can move from 'Auto' to 'Aperture' setting, you can also move to 'Shutter' priority.  This is the trick you use to get those beautiful misty pictures of waterfalls like this one. 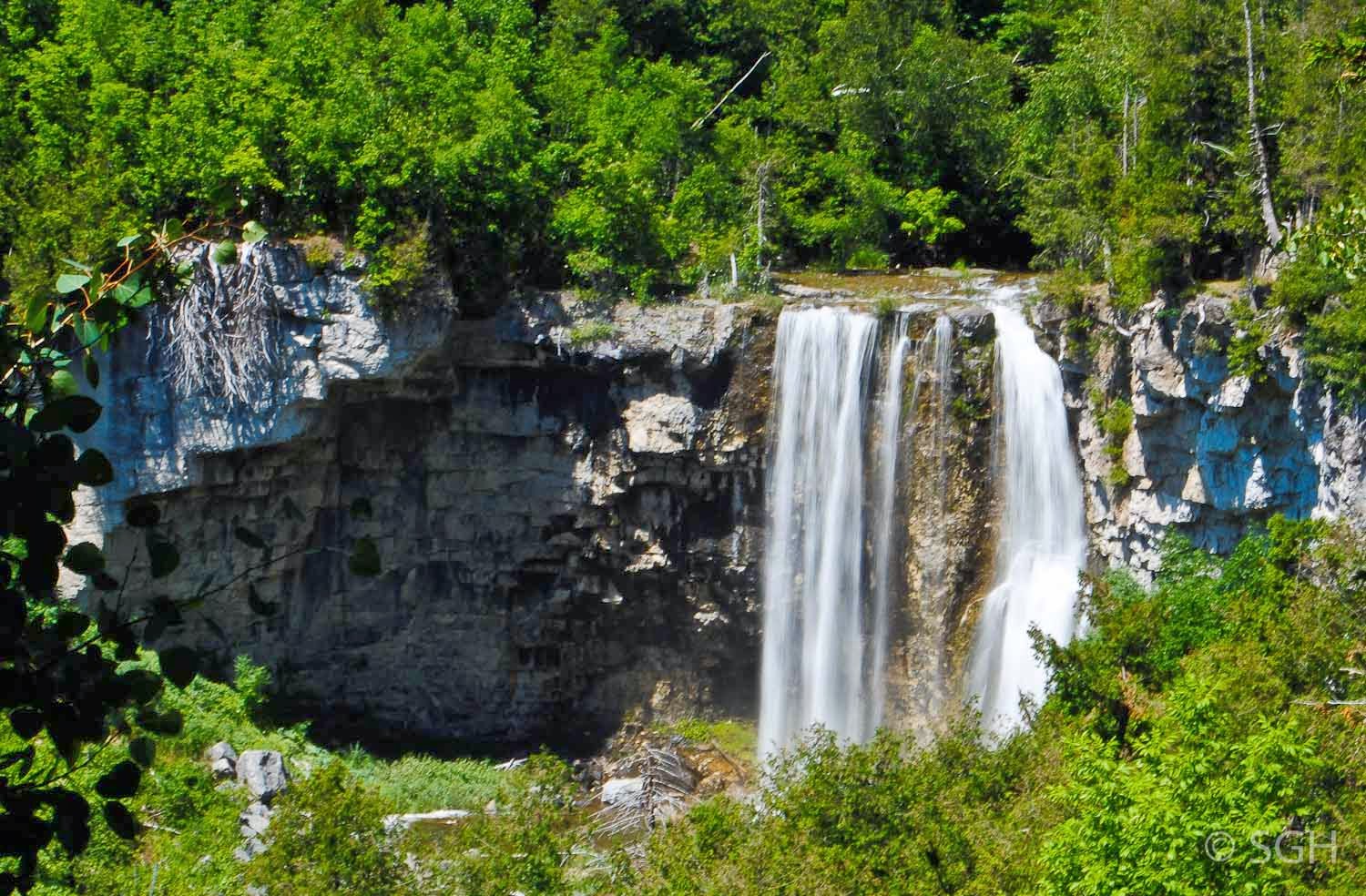 These are the two pictures I took of Eugenia Falls that day.  I reposted one like this just a week or two ago when I showed the falls totally frozen.  Previously I had always tried to 'stop' the water to get a nice sharp picture (as in the photo below), but once I learned how to slow it down instead, I think it makes a much better picture (as above), and I now try to shoot all waterfalls this way. 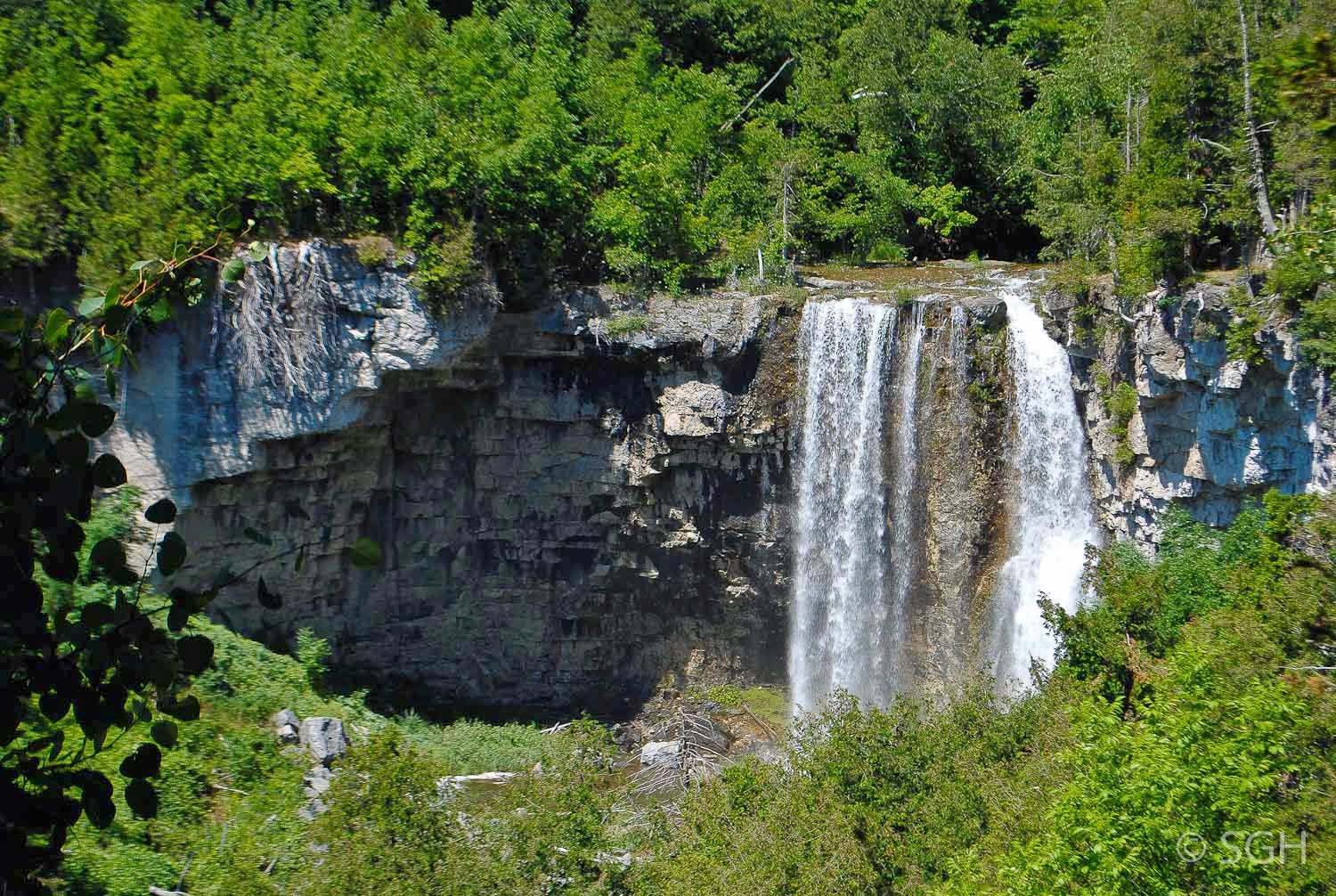 To change from what I used to photograph, I set the camera to 'Shutter' mode, and then set the speed down to about 1/8 of a second.  This gives time for the water to move, giving this effect (as in the first photo).  But of course it would also make the rest of the picture all blurry.  So you need either a tripod, or you need to brace yourself against a tree and hold things really still.  I have found I was actually able to shoot all this ones just by bracing myself and holding the camera steady. 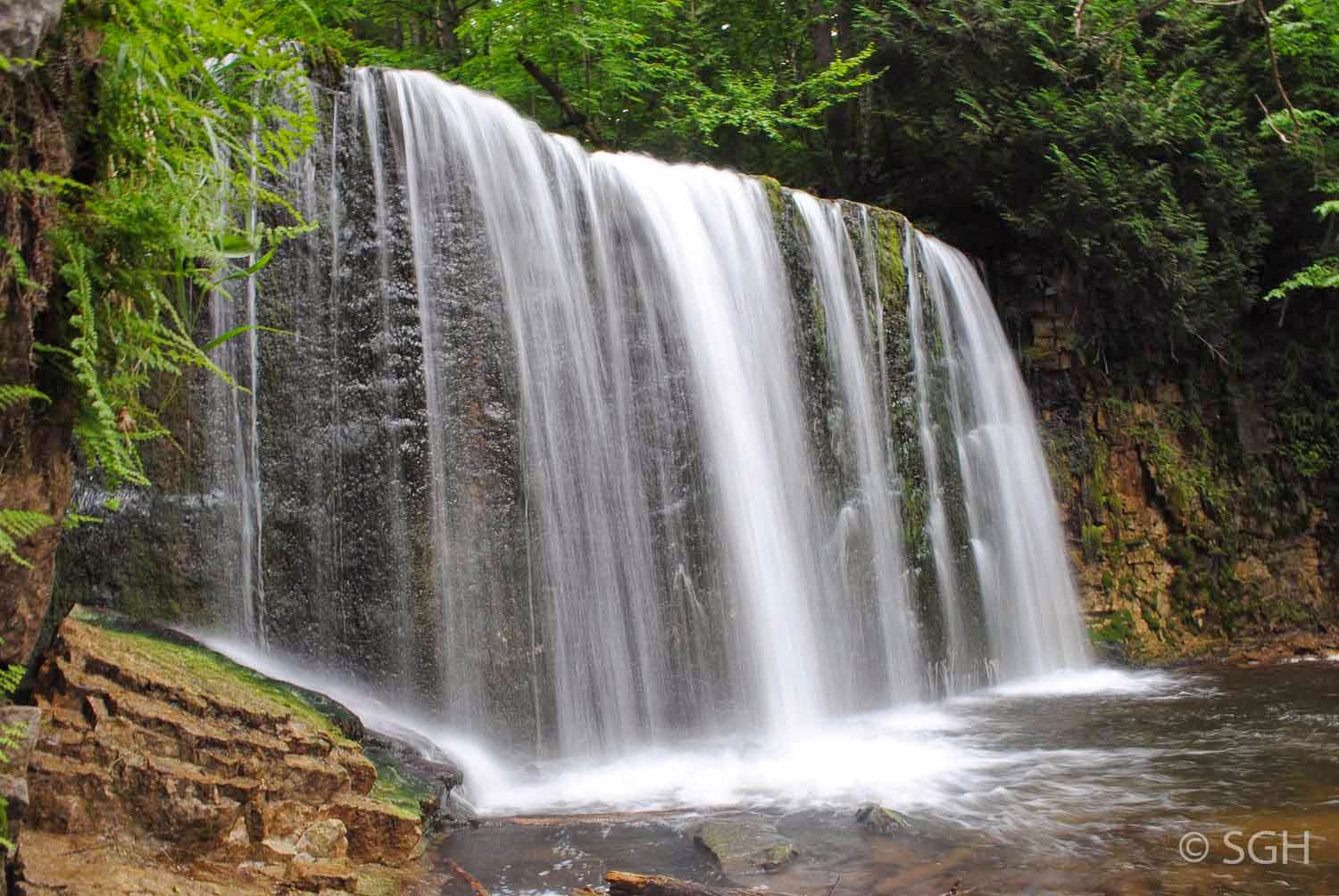 Hogg's Falls is probably my favourite, and you've seen this picture or one like it before on this blog.  In doing this, you need to watch for a message that says 'Too Much Light' or 'Too Bright', because 1/8  of a second is a long exposure.  You then need to set the ISO down to its lowest setting - on my camera 100.  That makes the light sensor less sensitive, and hopefully gets you the right exposure. 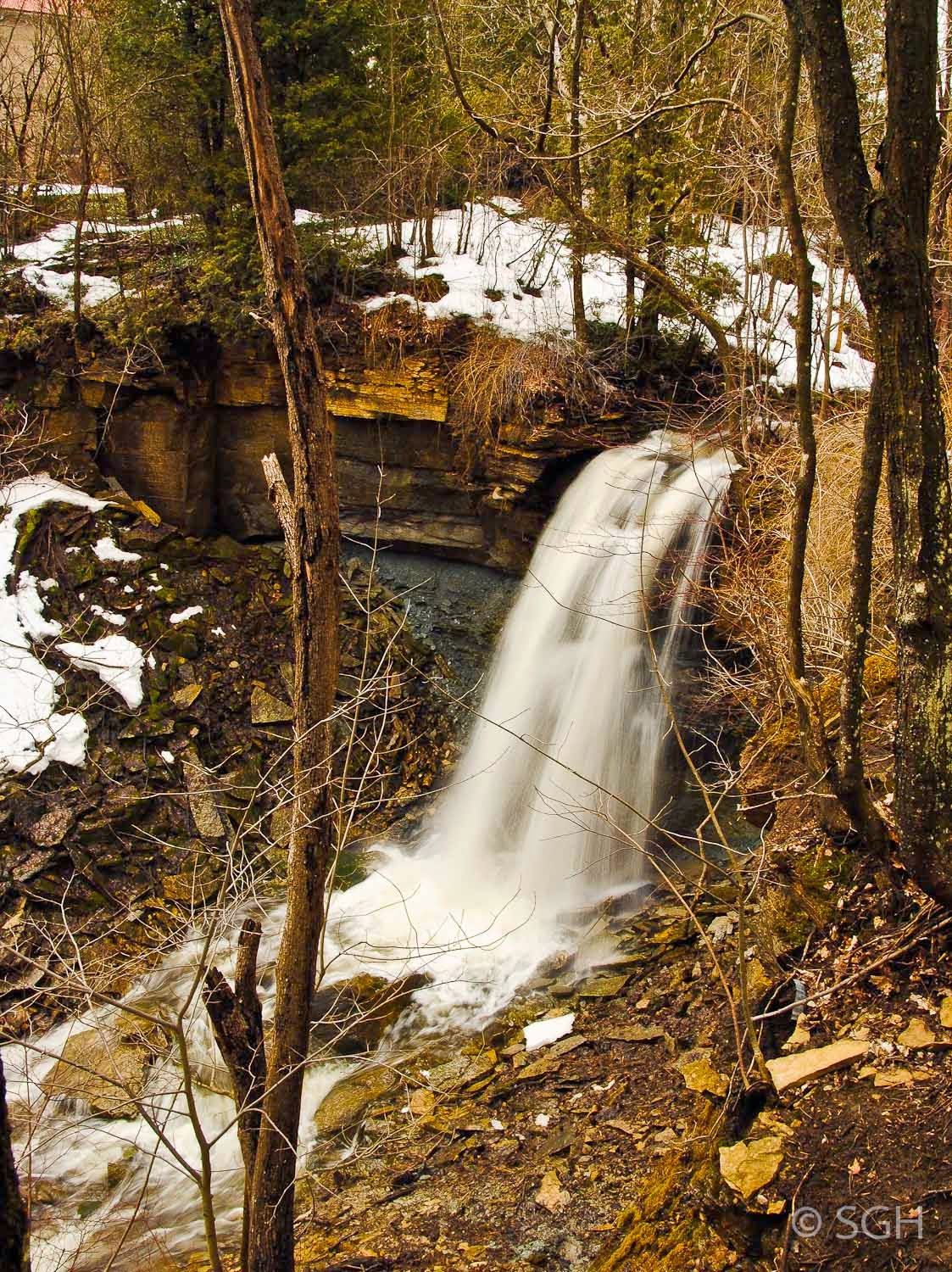 I have also played around with exposure compensation as I discussed yesterday, as well as varying the shutter speed somewhat, from as low as 1/4 up to 1/10th. But as I've said before, with digital, you can change settings slightly, and try as many shots as you like. 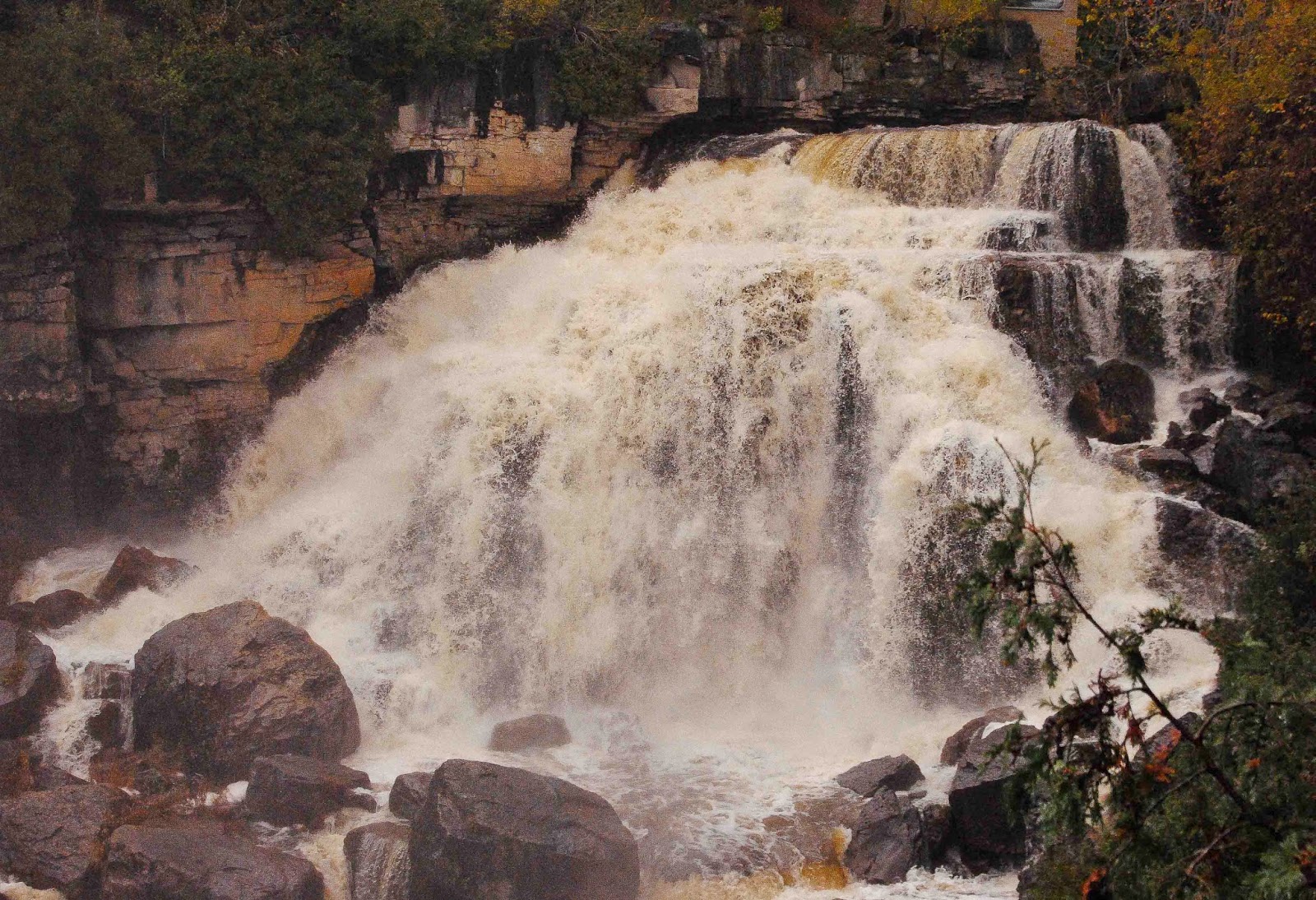 Here's a final pair of pictures of Inglis Falls in Owen Sound, taken last November.  I think I"ve posted them before too, but they illustrate well the two approaches to taking waterfall shots.  In my mind, a very good reason to move beyond the 'Auto' setting. Which do you prefer? 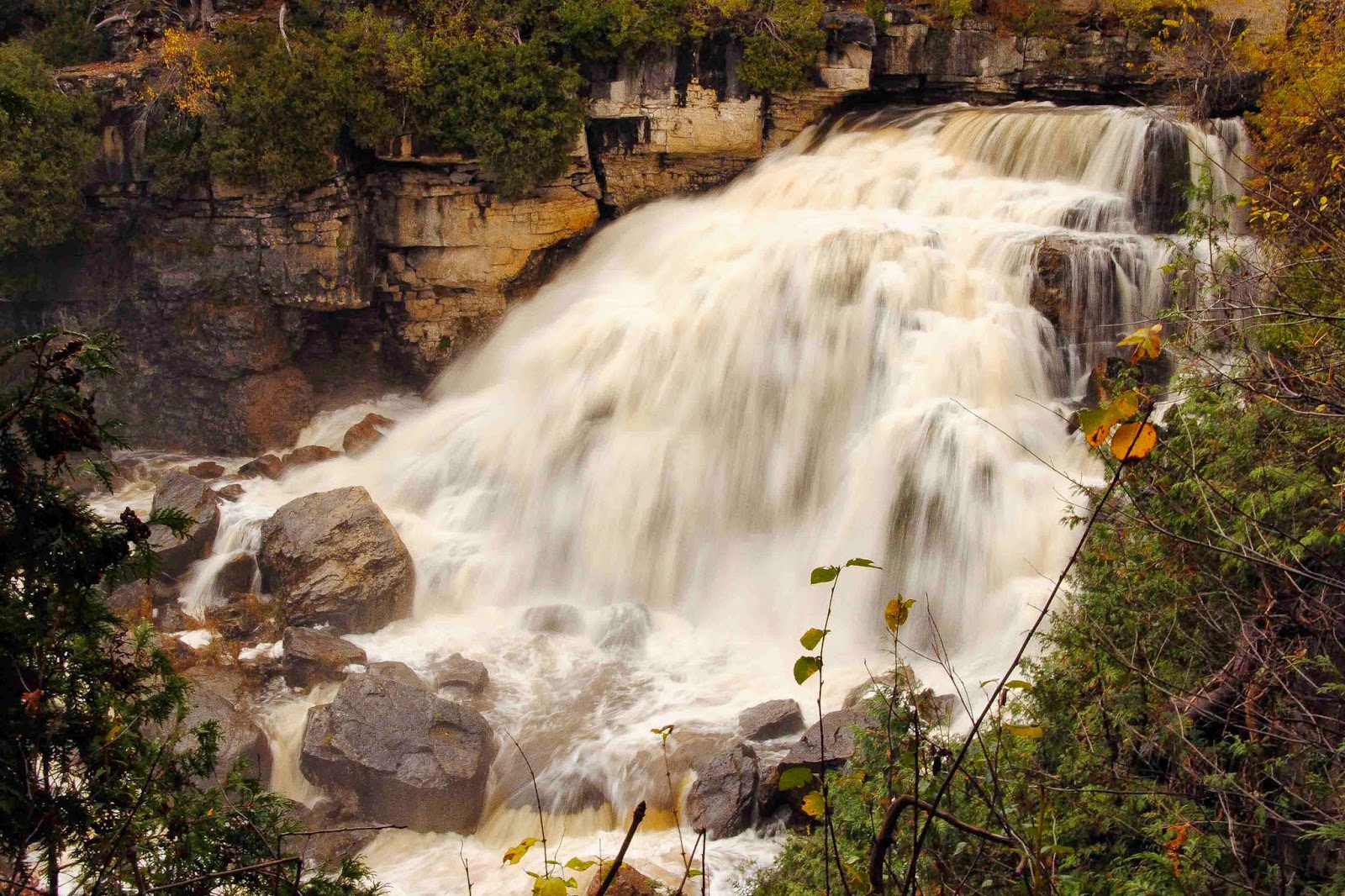 I have more I want to say about what I've learned about photography, but I'll leave that til later and return to my usual seasonal reports on the valley tomorrow.  I did finally see my first robin today, only 3 weeks later than usual!