Here we are, finally back to my last two Arctic posts, these on the big natural parks and on the finding of the Franklin shipwrecks.    Hope you enjoy them.

Tallurutiup Imanga (known by whites as Lancaster Sound) is by far the largest protected area in Canada, and one of the most significant ecosystems in the world.  It's a National Marine Conservation Area, the equivalent of a national park but in the marine environment.  This is a land of water, ice, and marine mammals, traditional hunting and fishing area of the Inuit for 4000 years or more.  Icebergs float by and whales swim past. 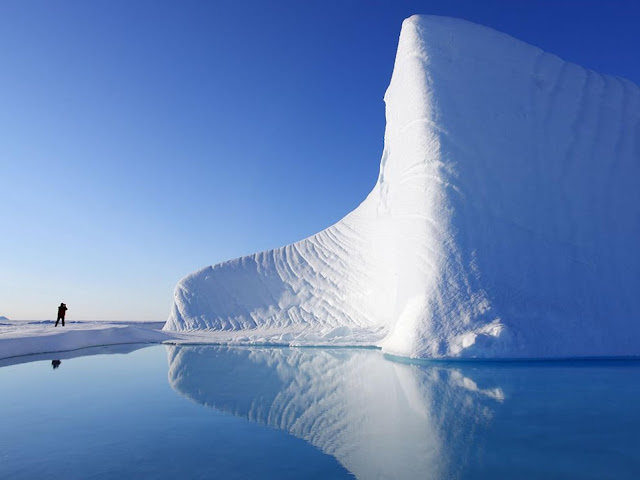 The food web here starts with microscopic marine organisms that are eaten by larger creatures and then fish.  The fish feed the seals and whales, and the seals and fish feed the Polar Bears and the Inuit.  Narwhals are just one of the iconic wildlife species here.  There are also Beluga and Bowhead Whales, Walrus, and those Polar Bears.  It's one of the most significant and least disturbed natural ecosystems in the world. 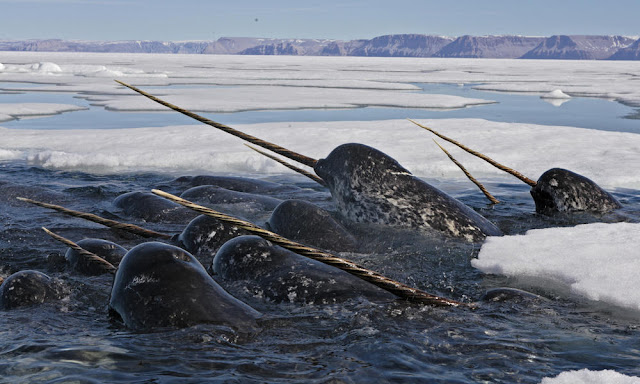 The proposal to conserve this area has been developing for some years, with proposals from both Parks Canada and the regional Inuit association.  Shell Oil's donation of a group of offshore oil leases in nearby Baffin Bay was an important spur to final approval.  The final area, as you see on the map below, is enormous (it dwarfs any other protected area in Canada) and includes not only all of Lancaster Sound west as far as Resolute, but Admiralty Inlet, Eclipse Sound and the western side of Baffin Bay.  It wraps around most of Sirmilik National Park. 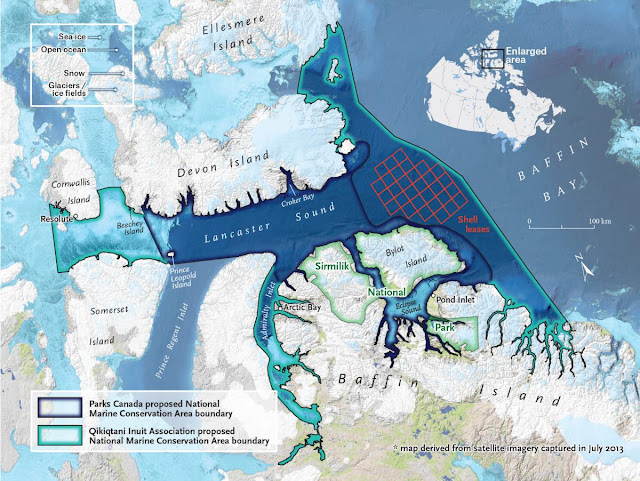 This was very much a joint effort of both the Inuit who wanted their homeland protected and conservation organizations like the World Wildlife Fund, as well as Parks Canada.  Under the terms of the Nunavut Land Claims Agreement that was built into the establishment of Nunavut as a separate Arctic region, the Inuit will retain all their traditional hunting and fishing rights, and be co-managers of the area.  They have been an integral part of all these Arctic ecosystems for 4500 years. 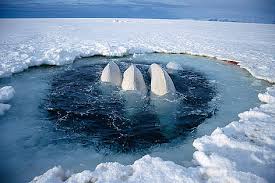 A key critical feature of this area is the 'polynyas', open areas of water at the ice floe edge.  This is a very tiny one, but seals, walrus, whales and polar bears as well as these surfacing Belugas all feed at the floe edge, so this is the place to see them.  And they all have to come up to breath eventually!  They're not aquatic animals, they're marine animals! 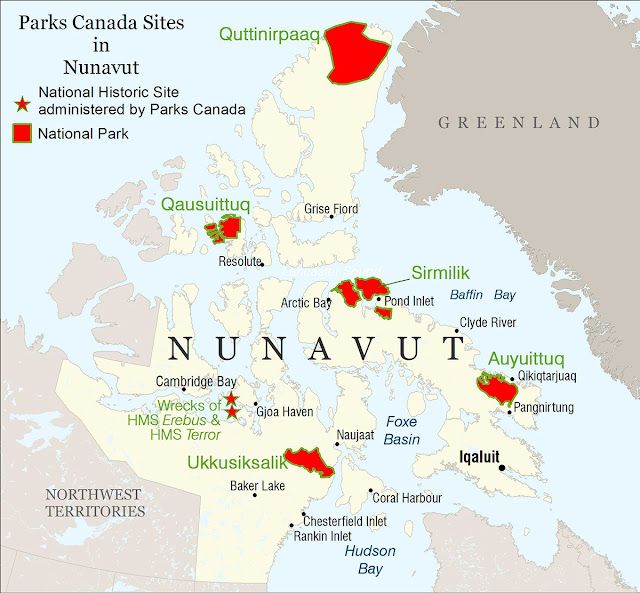 Beyond that spectacular natural area there are four other national parks on the Arctic islands.  Of the four national parks located on the Arctic islands, Quttinirpaaq on the north end of Ellesmere Island is by far the largest and most northerly.  Of the other three Sirmilik is the one we'll look at first.
Sirmilik National Park, or "Place of the Glaciers", is almost surrounded by Tallurutiup Imanga.  It includes all of Bylot Island and large areas on Baffin Island on both sides of Pond Inlet.  Bylot is known particularly for its millions of nesting seabirds. 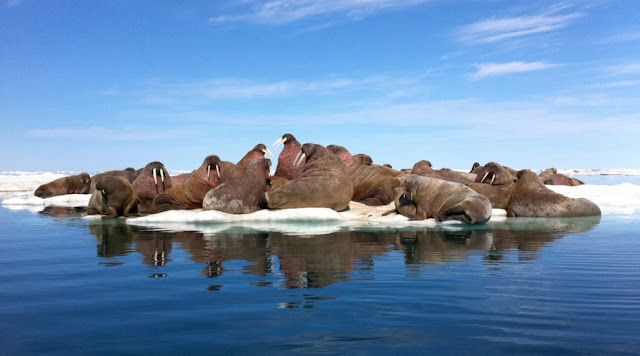 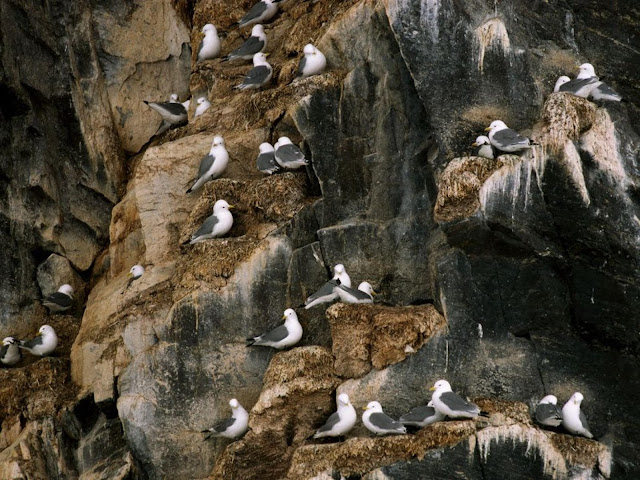 Among Arctic parks, Sirmilik is relatively easy to access (after you've paid to get there), so day visitors from cruises docking in Pond Inlet can go hiking on the glaciers and among the hoodoos or take longer excursions out to the floe edge.  The combination of spectacular scenery and the wildlife make it unique among the Arctic national parks.  Of course it also features Inuit cultural sites and the history of Northwest Passage exploration.  As with all the Arctic national parks, registration both upon entering and leaving the park is required; rescue would be expensive! 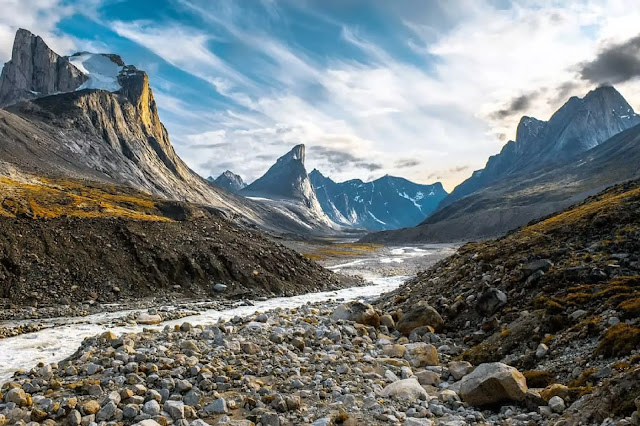 Auyuittuq National Park or "Land that Never Melts", is known for its incredible mountain scenery.  It sits on the south end of Baffin Island, encompassing the Penny Ice Cap, in between Pangnirtung and Qikiqtarjuac.  The popular access route takes you on a 97 km hike through Akshayuk pass, passing Mount Thor with its incredible vertical cliff.
Because of the mountains this is the Arctic's most popular rock climbing destination (for experienced climbers only!).  Wildlife is relatively scarce so hiking is the preferred activity.  And it's an awesome destination you won't forget!
Qausuittuq National Park. or "Place Where the Sun Doesn't Shine", is a group of polar desert islands in a frozen sea providing habitat for species such as Muskoxen and Arctic Wolf.  With the adjoining protected area of Polar Bear Pass it conserves critical wetland and marine habitats that the Inuit of Resolute have relied on since they were unceremoniously resettled there in the 1950s. 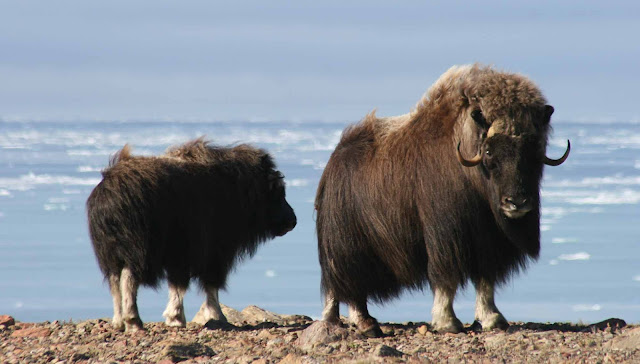 The other iconic wildlife species of the park is the endangered Peary Caribou, a small caribou species that is barely hanging on in this part of the Arctic.  The park contains important calving grounds and winter habitat. 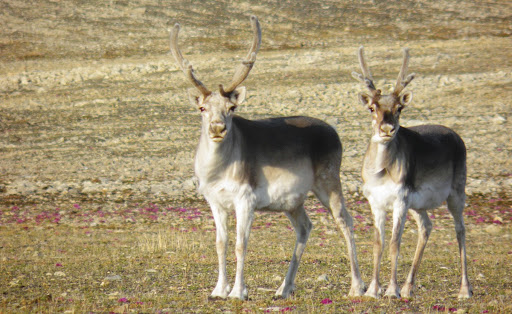 Though the terrestrial environment is harsh, there is rich marine life and a large bird population here.  Both Ringed Seals and Bearded Seals are plentiful, along with Narwhals, Bowhead Whales and Walrus.  As the name of Polar Bear Pass to the south reflects, Polar bears are regularly seen.
Visiting the park is a challenge, though visitors are now welcomed.  As the park was only opened in 2017, there are no facilities or trails yet. You'll be dependent on a chartered flight from Resolute to get here and the only real activity is hiking.
Quttinirpaaq National Park, or "Top of the World", is the second most northerly park in the world, after one in Greenland.  It's a land of ice caps, glaciers and wild rivers on the north tip of Ellesmere Island.  And it's very remote.  Here it's an 800 km. chartered flight to get you here, at a cost of $60,000.00!  Unless you're very well off, you'll have to go in a group! 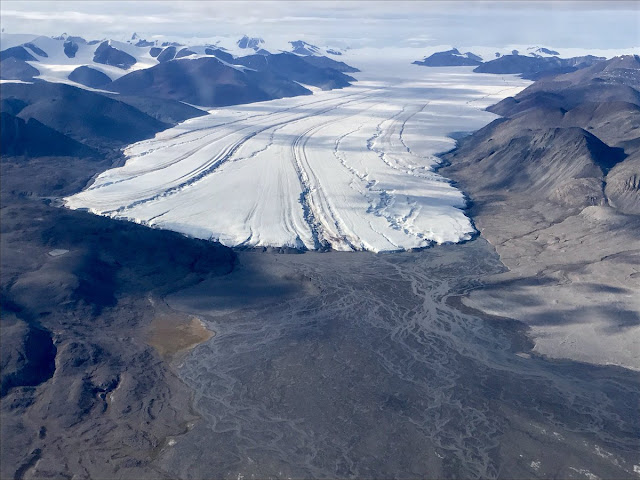 Quttinirpaaq has similar wildlife species as Qausuittuq, but fewer of them.  The area has never been an important Inuit hunting area.  But Parks Canada does have 3 gravel air strips and ranger stations and there are two hiking routes.  The park was established in 2000.
Let's just visit the Polar Bear Pass National Wildlife Area before we finish.  This is a large low valley crossing Bathurst Island (named after the British Secretary of War and the Colonies in 1820) featuring an enormous important wetland.  It's home to numerous species of migratory birds, supported by a dense population of insects in the summer months.  Polar Bears also pass through the area heading southwest to feed on seals and walrus on Graham Moore Bay. 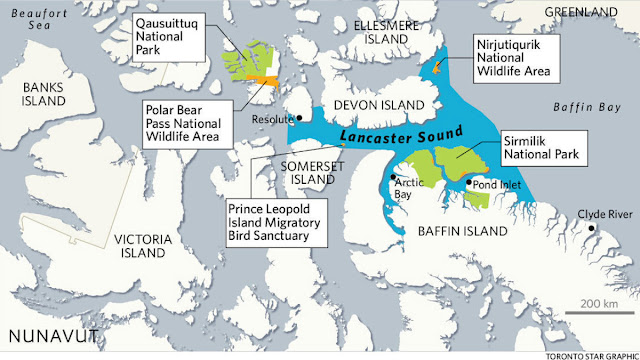 A small one-building research station was established here in 1968, long before the protected area was established, and is available for researchers to stay in while conducting field research.  Managed by the Canadian Museum of Nature for many years, this field station is responsible for much of our detailed scientific knowledge of Arctic ecology
.
Tomorrow, the story of the final finding of Franklin's two shipwrecks.  We'll leave the Polar Bear below lounging on the cool ice! 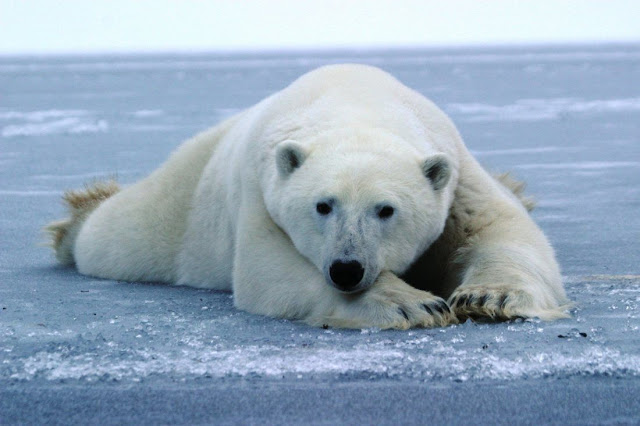 'Qauijimajatuqangit'
I was particularly impressed in preparing this post with the extent to which Qauijimajatuqangit (Inuit traditional knowledge or 'IQ') has been put front and centre.  It's taken us over 400 years, but we're finally learning to respect indigenous oral history as equal to white written history, at least in the Arctic.  This is written right into the establishment of Nunavut, and into Parks Canada's policies.
If we had done so 165 years ago it might have saved Franklin's men.  We do need to learn this in the rest of North America though!  Here traditional Inuit uses of the land and traditional Inuit knowledge of the wildlife is built right into park management, and Inuit are hired for most park warden positions.  It's notable that there are really no english names for these parks in use, just the Inuit ones.
Posted by The Furry Gnome at 12:54 PM