February is Black History Month, and our national broadcaster, CBC, has been full of articles about interesting and famous Black Canadians.  I sometimes get frustrated that it's easier to celebrate those public individuals who have established a reputation than it is to tackle the difficult issues of systemic racism, but still, these people deserve more recognition.

Here are a few of the people I've read about recently:

Emery Barnes was a gifted athlete from Oregon who almost made it into the NFL (and into the Olympics as a high jumper).  He moved to B.C. and played 3 years for the BC Lions of the Canadian Football League, while also getting a degree from UBC.  He was elected to the provincial Legislature in 1972, and served 24 years through 5 elections.  He was the first black speaker of the house in a Canadian province.

Carrie Best became a civil rights activist in Nova Scotia after experiencing racism growing up.  After being arrested and forcibly removed from the 'whites only' section of the Roseland Theatre in 1941 she established The Clarion newspaper and began her campaign against racism.  It was one of the first newspapers in Nova Scotia owned and published by Blacks. 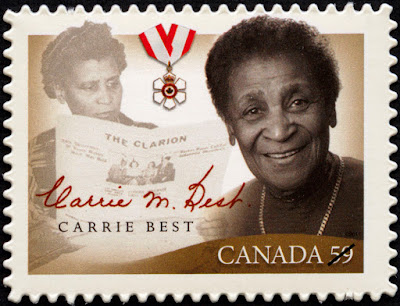 I wanted to pull the $10 bill out of my wallet and share the picture of Viola Desmond (below), but I thought I might get arrested for publishing an image of money, so Carrie Best's picture on a Canadian stamp seemed safer.

Viola Desmond followed Carrie into a theatre in Nova Scotia in 1946.  She too was arrested and charged with trespassing in the 'whites only' seats, so sued the theatre.  The Supreme Court ruled against her, but she was eventually pardoned in 2010, 45 years after her death.  She is the one whose picture is currently on our $10.00 bill.

Michaelle Jean was the 27th Canadian Governor General, serving from 2005-2010.  She came to Canada as a refugee from Haiti in 1968, and worked for years as a journalist and in charity, mostly directed at assisting youth living in poverty.  Her term as Governor-General was well received; she has received numerous honours and awards including 17 honourary degrees.

Harry Jerome was one of the world's fastest men through 3 Olympic games. Though he never won the gold, he set the world record for the 100 yard dash 3 times, the last time at 9.0 seconds!  Born in Saskatchewan he had actually been a gifted athlete in several sports.  Harry was named the B.C. Athlete of the Century and a statue was erected in Stanley Park in Vancouver. 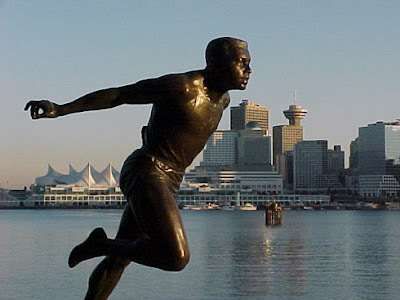 Ira Johnson was an Oakville man who was threatened by the Ku Klux Klan (yes, here in Ontario) when he and a white woman planned to marry in 1930.  A cross was burned in the street by 75 members of the KKK who then kidnapped the woman and further threatened Johnson personally.  However public opinion quickly turned against the Klan, who included several prominent businessmen, and the pair ended up getting married a month later.

Kay Livingstone worked as a radio host and actress starting in the late 1940s.  She helped establish the Canadian Negro Women's Association (CANEWA), a group which started the famous Toronto Caribana Festival.  These efforts led eventually to the Congress of Black Women in Canada.

Elijah McCoy was born in 1844 to fugitive slave parents who had come to Canada via the Underground Railroad.  He studied as a mechanical engineer in Scotland and returned to the family, then in Michigan.  McCoy became an inventor whose practical inventions focused on improved lubrication systems for railways.  Because his system was seen as better than others, it was sometimes referred to as "the real McCoy".

Annamie Paul is a lawyer and politician who was elected as the Green Party leader last October, the first black Canadian to lead a federal party in Canada.  She was born in Toronto in 1972 and has been active in politics all her life.

Willie O'Ree was the first black hockey player to make it to the NHL, breaking that colour barrier and therefore referred to as 'the Jackie Robinson of ice hockey'  He only played one season and a few games in another with the Boston Bruins, but he won two scoring titles in the Western Hockey League.   He received numerous awards after retiring for his lasting impact on the game of hockey.

Lincoln Alexander is the one among all these famous black Canadians who I knew personally.  Alexander was the first black Canadian elected to Parliament, the first to be a federal Cabinet member, and the first Lieutenant-Governor, here in Ontario. 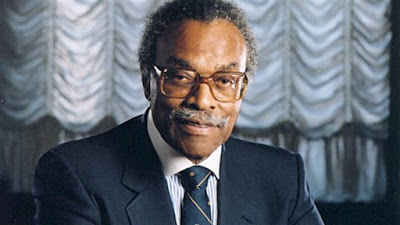 I got to know him when he served as the Chancellor at the University of Guelph for 16 years where I taught.  For three of those years I was on the University's Board of Governors where I interacted with him personally, and I also sat among the 'dignitaries' on the platform (he was one, I certainly wasn't!) at convocation.  It was there I heard him say some different kind words to every single student who crossed the platform to graduate.  He was simply one of the most humble, dignified, thoughtful men I have known.