Since written records exist, societies, at least Western societies, have celebrated the beginning of February as a turning point in the year.  Winter is half over, days are longer, the sun is higher in the sky, and at least here, we're much more likely to get those blessed sunny days.

Held on Feb. 1st, Imbolc is the ancient Celtic festival marking the coming of early spring, often celebrated as St. Brigid's Day.  Brigid was a Celtic goddess, adopted as an early Catholic Saint, one of Ireland's three patron Saints.  The 'real' Brigid was said to have studied under St. Patrick.  Imbolc has been associated with both lambing season and spring sowing of crops in Ireland and Scotland.

Candlemas is a largely separate Christian holiday celebrated on Feb. 2nd.  It too goes back to ancient times, and is said to have its origin in celebrating the return of light.  I only have to turn and look out my window to see how February's light is so much brighter than the dull days of January!  Both of these holidays may have origins in the Roman holiday Februalia. from which of course we get the modern month of February.

As for the modern Groundhog Day, in Pennsylvania this started as a newspaper stunt in Punxatawney, later picked up here in Wiarton and in Shubenecadie, Nova Scotia.  But it may have its Punxatawney origin, in Pensylvania Dutch country, in earlier German Candelmas traditions.  At any rate when Wiarton Willie appeared the other day, he did not see his shadow, so predicting an early spring, you'll be glad to hear! 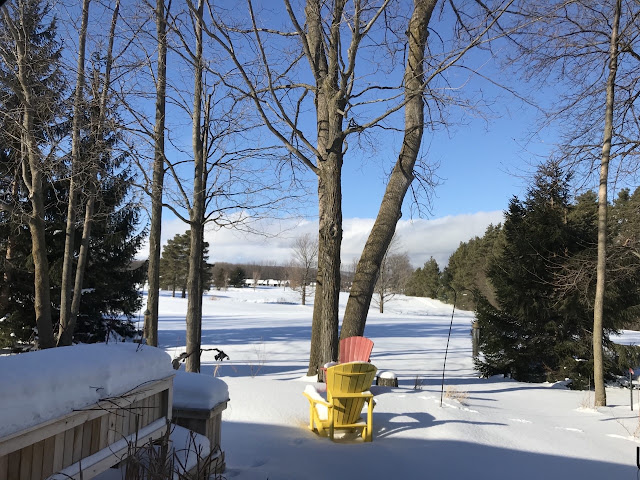 As for me, I just took a moment to rejoice at the bright February sunshine, three days in a row now!

Yesterday was a bone scan test in Owen Sound, we thought it would be a quick half-hour appointment.  And it was, until they said, 'You''ll have to come back for part two of the test this afternoon.'  What with delays and driving, it turned into a whole day of going back and forth.  We were both exhausted.