The fabled Northwest Passage that explorers sought for so long is regularly sailed by various ships today, depending on ice conditions.  Shipping has expanded rapidly during the past decade as climate change has in turn changed ice conditions, opening the passage to ships, at least during the summer.

There are actually four different routes through the Northwest Passage, as shown on this map.  Generally they can be described as the northern and southern routes, the northern being shorter and straighter, but more dependent on ice conditions.  At the west end of the northern route the Prince of Wales Strait between Banks and Victoria Islands is more likely to be open than the outer Arctic Ocean, or the McClure Strait to the north, as shown (in white).  Following the southern route, the traditional trip takes ships around the southeast side of King William Island before heading west, but if Victoria Strait is free of ice, ships can now take the shortcut straight south as shown.  This is the route with more Inuit communities.

Ship entries to the Arctic reached over 1600 annually in 2018, including Greenland.  This counts only separate ships; individual ships visiting more than once get counted only once.  Among these, fishing boats are the largest group, mostly coming to Lancaster sound in the eastern Arctic.   Research vessels and icebreakers were the next biggest group, with cargo ships and bulk carriers next, a significant number of those associated with the Mary River Iron Ore Mine near Pond Inlet.  Oil and gas tankers are actually the smallest category, below cruise ships.

'Sealift' ships are a big and interesting category among the cargo ships.  The government of Nunavut now operates 'sealift' through three private companies who ship all kinds of goods from southern ports.  These include construction supplies, vehicles and fuel supply as the biggest non-perishable items.  Most Arctic communities depend on community sized generators for electricity so a fuel supply is essential.  Our son William spent a few years flying for Wasaya Air, the native owned airline in northern Ontario.  Among other things he flew a plane fitted out to carry a cargo of fuel oil into isolated communities on the shoreline of Hudson's Bay/ 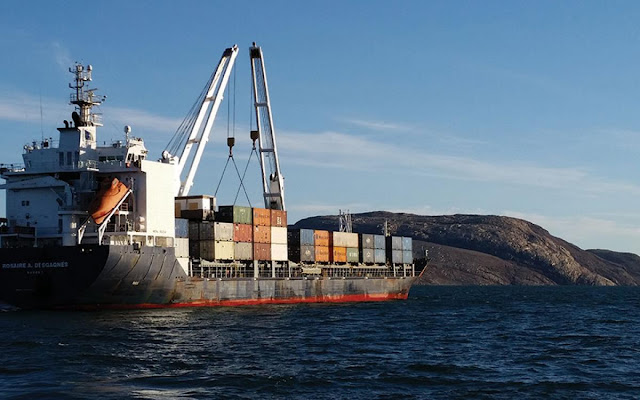 But families also order all manner of dry goods from the south, racking up perhaps a $5000.00 grocery bill in one shopping trip!  Many plan an annual holiday in a southern city and spend the first two days shopping, buying their entire annual food supply except for rare fresh fruit and veggies that may be flown in to the community store.  Families also usually plan an annual hunting/fishing/gathering trip back to the land.  The southern purchases come in large wooden crates, in which packing has to be planned carefully.  Every year a number of new sheds pop up in the weeks following  the sealift arrival.  All the homes in Nunavut have huge pantry rooms to facilitate storing the year's food supplies!

Our other son Matthew told me about packing a crate full of chairs headed for the Arctic when he was working in a furniture factory.  Everything had to be braced carefully and solidly in case of ships bouncing in the ocean, or the crate being dropped on the dock.  Whereas they might typically hear back that furniture had been delivered successfully in 3 days or so, in this case they didn't hear for four months!

There were 73 cruise ships in 2019, a group of ships that can have major impacts on Arctic communities.  Except for the Crystal Serenity trial cruise in 2016, these don't include any of those giant cruise ships you see further south, but smaller 'adventure cruise' style ships with perhaps 100 or even fewer passengers.  Even then they can have a major impact on a small Arctic community, both positive and negative.  Increasingly they do provide an outlet for Arctic crafts, bringing some welcome cash income, but they may only visit a community two or three times over the summer.

In fact, most of these cruise ships don't go very far into the Arctic.  The small settlements on the outer side of Baffin Island, from Iqaluit north, are the most popular, because of course they are easy to get to.  A handful of ships go into Lancaster Sound, at least to visit Pond Inlet, perhaps Arctic Bay, Beechey Island and Resolute.  Beechey Island is where Franklin spent his first winter and three men died.  The three graves are now a National Historic Site. 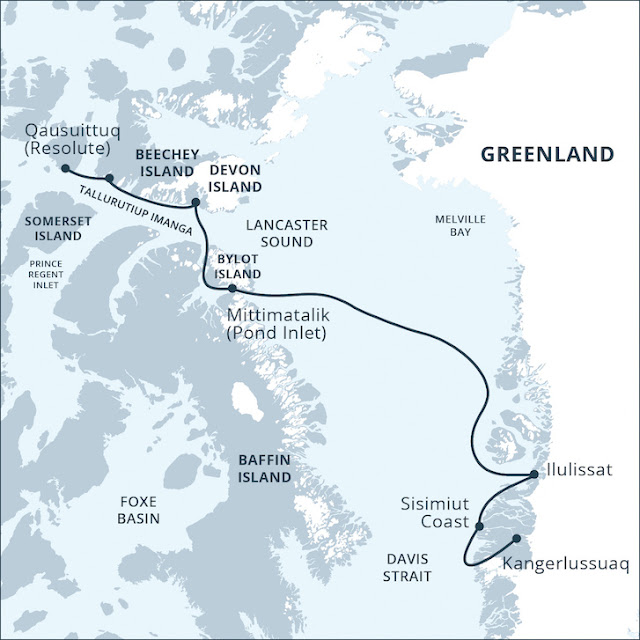 This is a typical cruise from Polar Dream Travel, stopping at both Pond Inlet and Resolute as well as Beechey Island and a visit to Devon Island for wildlife viewing.  As you can see this trip like many others includes stops in Greenland.  Kangerlussuaq is a popular location for flying in or out of the Arctic.
Pond Inlet (or Mittimatalik) is perhaps the most popular stop on Arctic cruises because it's a stop for ships only visiting Baffin Island, or going a short distance into the Northwest Passage like this, as well as those that go much further west (below).  It's a town of about 1300, named by an early British explorer after John Pond the astronomer.  But it's best known as a stopover to see marine wildlife, particularly Narwhals, the 'unicorns of the sea'.

Pond Inlet is close to both Sirmilik National Park and Lancaster Sound, famous as the home of many species of sea mammals.  A huge area here is now the Talliurutiup Imanga National Marine Conservation Area, the largest such conservation area in Canada. 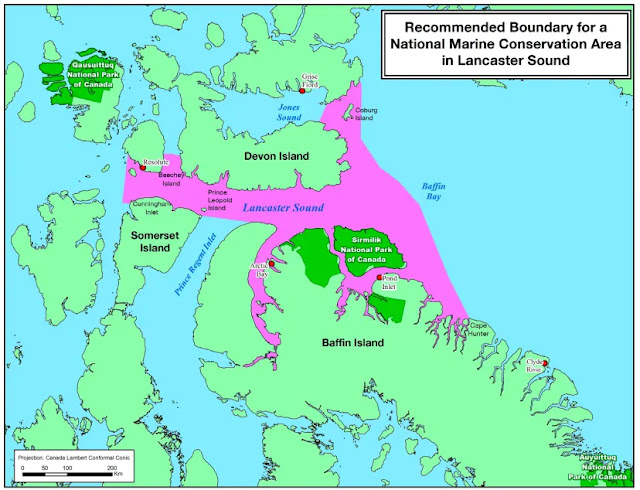 Slightly further west is Resolute, a very small community of only about 200 people.  But it has an interesting history, as it (and Grise Fjord) are the two most northerly communities, deliberately established by the federal government by forcibly moving families from northern Quebec, not without controversy, during the Cold War in the mid-1950s.  This was seen as as a way to reinforce Canada's claim to Arctic sovereignity.  Only Eureka and Alert, 'closed' military and meteorological outposts are further north.

It's only a few cruises that visit further south through the Northwest Passage, potentially stopping at Talleyoak, Gjoa Haven, Cambridge Bay and Kuglutuk. 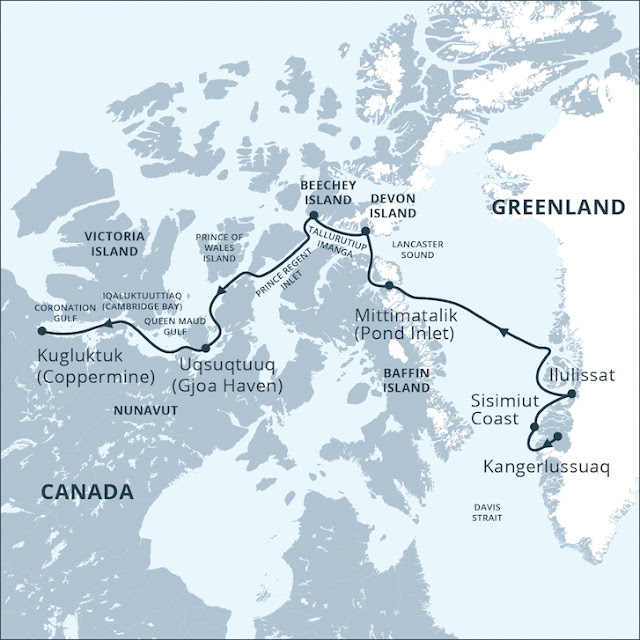 This other Polar Dream Travel trip visits three of those communities, turning around so to speak in Kugluktuk, after disgorging one load of passengers and gaining another.  Kugluktuk is the former town of Coppermine.  That name reflects the presence of small copper finds along the Coppermine River that empties into Coronation Gulf here.  Copper Inuit and Copper Indians (the Dene) who live in this region both used this copper for tools, and  have had an ongoing feud for centuries, illustrated most specifically by the Bloody Falls Massacre reported by Samuel Hearne in 1771.  A healing ceremony was held in 1996 to heal these longstanding wounds.
Kugluktuk is one of the Arctic communities that benefits from having a regional high school, that serves other communities as well.  The high school plays a huge role in supporting Inuit teens facing an epidemic of suicide, but getting teachers from southern Canada to stay is always a challenge.  The school teams are the legendary Kugluktuk Grizzlies.
Cambridge Bay, to the east lies on the south shore of Victoria Island, at the west end of Queen Maud Gulf.  It's a slightly larger centre, home to both a regional health centre and a campus of the Arctic College.  As well it's the administrative centre for western Nunavut.  Notably it is now the home of the Canadian High Arctic Research Station (CHARS), opened just over a year ago, with a strong Inuit influence on its architecture. 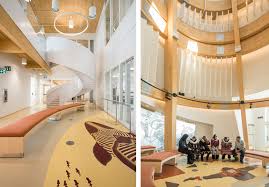 With all these local facilities, Cambridge Bay attracts more cruise ship visitors than other communities on this route.  It also served as the main base for ships involved in the hunt for the Erebus and Terror wrecks.
Finally, Gjoa Haven, or Uqsuqtuuq on King William Island, is a community with an interesting story too.  Roald Amundsen spent two winters in this bay during his 1903-06 traverse of the Northwest Passage, describing it as the "finest little harbour in the world" and naming it after his ship, the Gjoa.  He it was who also named Queen Maud Gulf.  He and his crew spent much of the time learning from the local Inuit, skills that would later prove invaluable when in 1911 he became the first man to reach the south pole.
The community is now expecting to see a visitor centre built at some time in the near future, celebrating the recently discovered Erebus and Terror, Franklin's two ships.  In the meantime they provide guardians who camp out near the sites, to ensure no disturbances take place.  These guardians also provide interpretation for visiting cruise ship passengers.  The discovery sites are not yet open to the public.
These are the main communities that mark the southern route of the Northwest Passage.  So if you have a spare $15-20,000.00 for an Arctic cruise, make sure you check the actual planned route of the ship.