Let's start our look at Baffin Island beyond Iqaluit with a comment on just how big it is, and how unique the landscape is.  Baffin is a lot bigger than you might think.  It's the fifth largest island in the world, from tip to tip it's longer than the entire west coast of the United States, from San Diego to Vancouver. and its landscape is very different from the rest of the Arctic, which is mostly low gently rolling tundra.  Here it's mountains, glaciers and icebergs. 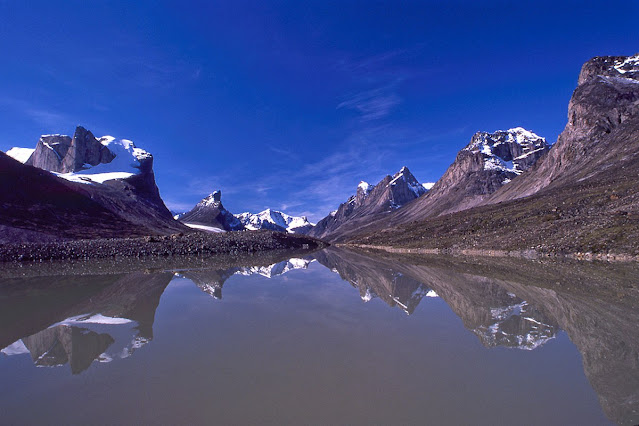 The east side of Baffin Island is part of the spectacular Baffin Mountain range, the highest peak of which, Mount Odin is higher than the highest peak of the Appalachians.  Mount Thor (in the distance on the left above) is said to have the highest vertical cliff on earth at over 4000 feet straight up (or down)!  Inlets along the central coast are spectacular fjords, with mountains rising directly from the water, while glaciers pour down the valleys from icecaps above.  This all makes cruises along this coast very appealing.  We are beyond the treeline here, so there are no trees. 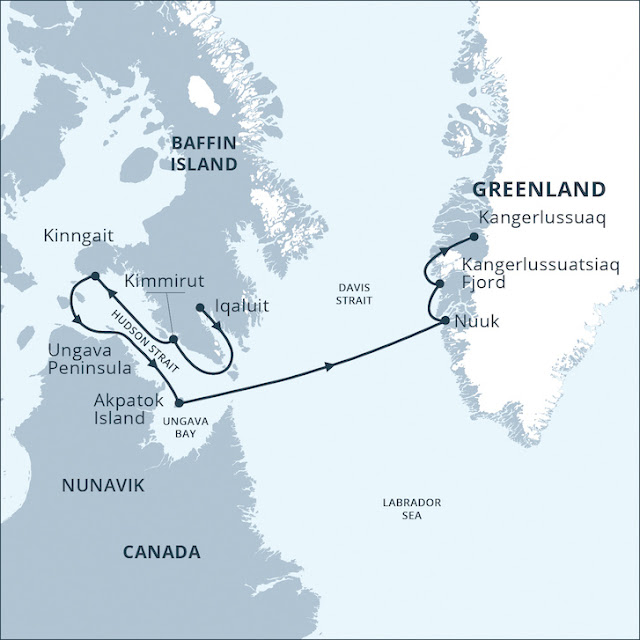 So a tour touching on Baffin Island is bound to come with some spectacular scenery and it also provides us with a way to introduce you to more Arctic towns.  This tour, from Polar Dream Travel visits Kinngait, the former Cape Dorset, perhaps the best known centre for Inuit art, particularly print-making.

The world famous reputation of Cape Dorset is built on a print-making studio created by southern artist James Houston who arrived in 1957 and encouraged local stone carvers to try stone-block printing,  Based on the original drawings by local artists thousands of prints have been sold, all over the world.  Today Kinngait as it is now known, has the highest density of artists of any community in Canada, with nearly 25% of the population employed in the arts sector. 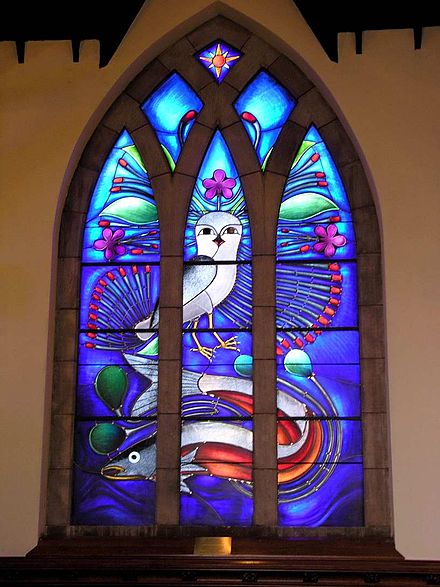 Pitseolak Ashoona and Kenojuak Ashevsak are among the pioneers of Inuit art here.  One of Ashevak's prints recently sold for $60,000.00!  The stained glass window she designed for the chapel at Appleby College in Oakville (above) is a beautiful illustration of Inuit art, featuring the owl and the Arctic Char.  The colours just blow me over!  Nuna Parr is internationally known for his stone carving (below).  Many others contribute to Kinngait being the 'Capital of Inuit Art' today.  You can fine many artists represented at Kinngait Studios, the former West Baffin Eskimo Co-operative. 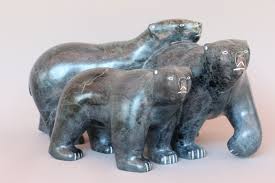 Before leaving this corner of Baffin Island I should mention Igloolik, at the north end of Foxe Basin to the west of Baffin, actually on the Melville Peninsula of the mainland..  Igloolik is known artistically as the home of ArtCirq, the only Inuit circus.  It's also a noted film-making centre.  Sadly the main co-op grocery store in town burned down in a disastrous fire just a few weeks ago, a tough challenge for the town to handle in the middle of winter.

The map below shows a cruise from One Ocean that takes you looping up the spectacular east coast of Baffin Island from Iqaluit all the way north.  Some spots on the map, like Monumental Island, are not towns but other sights of interest. 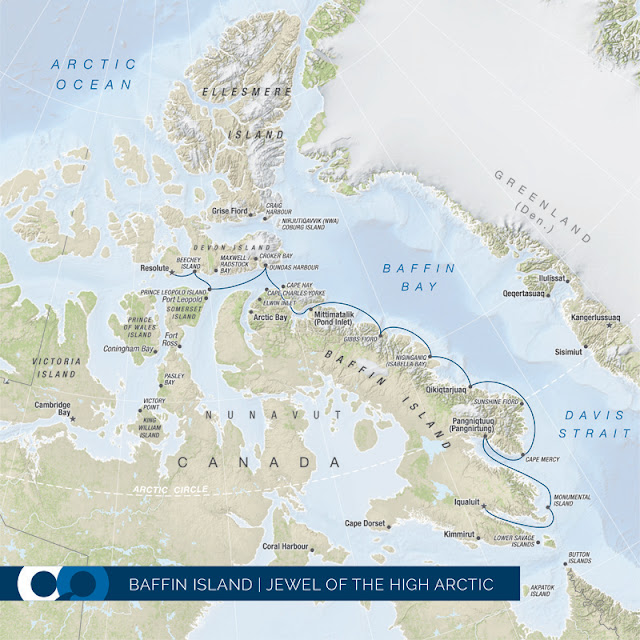 Heading north, the first town after Iqaluit is Pangnirtung, another internationally known centre for Inuit art, as well as the southern gateway to Auyuittuq National Park, a spectacular chunk of the central Baffin coast and mountain range.  Tapestries are particularly renowned among its art, and the 'Pang Hat', a unique (and warm) crocheted winter hat is popular.  This town voted to retain its English name because of its international reputation for Inuit art.  Like many others, the town grew up around an old whaling station, HBC post and RCMP post. 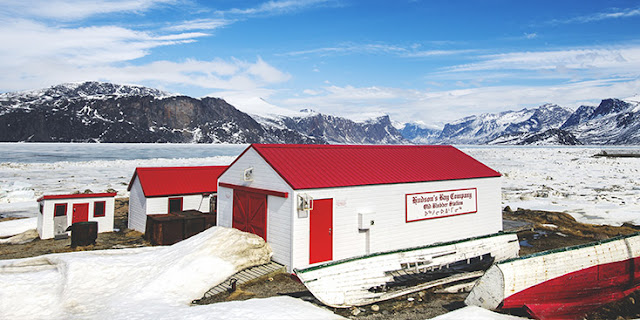 Auyuittuq National Park, 'the land that never melts', features stunning cliffs, mountains, glaciers and waterfalls.  As one Trip Advisor submission reads, "an epic experience with towering mountains, fierce winds, and cold temperatures.... an awesome destination that you will not soon forget."  The backpacking trip over Akshayuk Pass is the popular experience, an adventure that can take you from 30 km. to 97 km., depending on your stamina!  Because of that huge vertical cliff on Mount Thor this is the most popular Arctic rock climbing destination (for very serious climbers).
Moving further north we come to Qikiqtarjuaq, formerly Broughton Island, a great place for seeing whales and Polar Bears. and the northern gateway to Auyuittuq National Park.  It's also a popular place to see the northern lights.  'Qik' is also the iceberg capital of the Arctic.  The currents in Baffin Bay and Davis Strait carry icebergs calved off Greenland's glaciers, north and west first, to turn and sail down the east side of Baffin Island.  Here they come close to shore for your viewing pleasure.  It's even the place where you can go diving to see icebergs underwater!

This is an actual underwater photograph of an iceberg, taken by a diver in the Canadian North Atlantic.  It gives real meaning to the phrase 'the tip of the iceberg'!
The last community we'll encounter on the way north to Pond Inlet is Clyde River, or Kanngiqtugaapik, a smaller Inuit community with a strong local culture.  It sits amid spectacular scenery, surrounded by fjords like Kangiqtualuk Uqquqti, formerly Sam Ford Fjord, below, so it's a another popular climbing location. 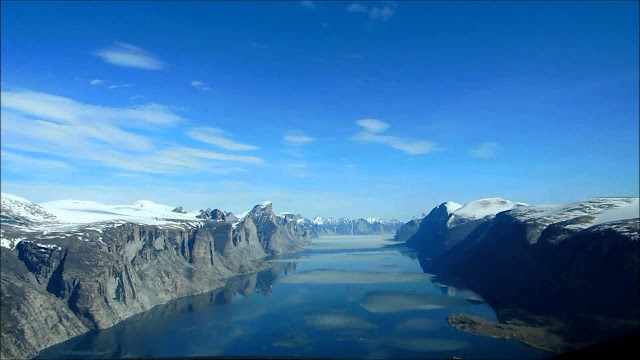