The Erebus and Terror

In August of 2007 a titanium Russian flag was planted at the North Pole in the bottom of the Arctic Ocean by Russian scientists in a submersible.  In response politicians in Ottawa started wondering what Canada could do to reinforce its own claim to Arctic waterways.  Someone, perhaps Prime Minister Harper himself, got the bright idea of finding the Erebus and Terror, Sir John Franklin's still missing ships.

In my opinion it was a great idea and today makes a great story, the one that I find the most intriguing in the Arctic today

The two ships were named National Historic Sites in 1997, a designation that gave Parks Canada a role in any future decisions about the ships, even though their locations were still unknown.  Under maritime law, the ships still belonged to Great Britain, though after they were found ownership was transferred to Canada.

During the past decade Parks Canada led a team of underwater archeologists with support from several different agencies and organizations to survey and eventually find the two ships, solving perhaps the greatest Arctic mystery of our time.  The search took several years given the very narrow window in ice cover during late August and early September when such work could be undertaken. 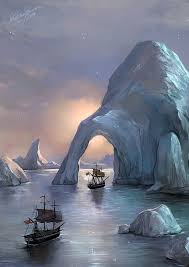 Fanciful and realistic illustrations of the Erebus and Terror, the ice-strengthened 'bomb ships', chosen for Franklin's expedition to withstand the ice.  And they have largely withstood any crushing impact, for 173 years, even underwater.  On the wrecks they found only the stern of the Erebus has been slightly damaged. 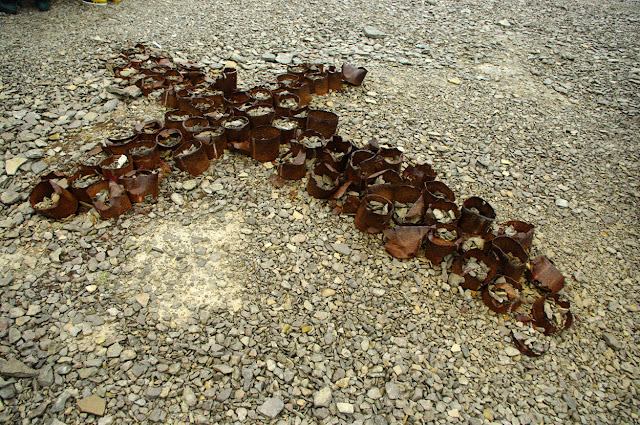 As I wrote in an earlier post, there have been numerous searches for artifacts and evidence even well into the 20th century.  This pile of empty tin cans arranged in the shape of a cross, the cans weighted down with small stones, was found on Beechey Island where Franklin spent the first winter. 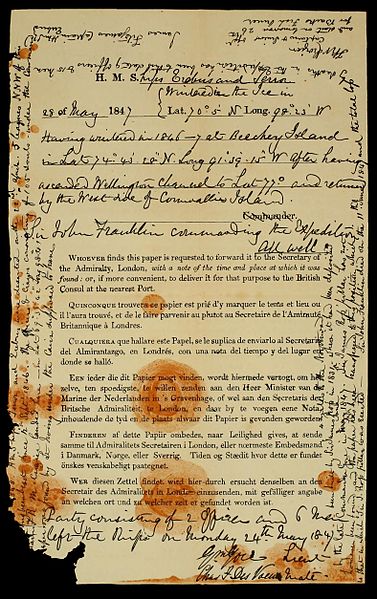 This is the only actual note Franklin or his men left, found by McLintock's men in a rock cairn on King William Island in 1859.  The note is just the scribbled writing around the sides.  Part describes the progress as expected over the first two years, until the ships were frozen in for the winter of 1846.  The second part was added in the summer of 1847 after Franklin himself had died, and the remaining men were setting out to walk south.

This is a fascinating map which shows the location of artifacts found, and the modern search areas for the two ships.  It hides decades of effort that went into many expeditions which found those artifacts, and 7 years of searching by a team of several ships from 2010 to 2016.  The yellow shows areas searched in previous years, and the red the main search area in 2014 when Erebus was found.  The red lines are ships going back and forth seasonally to Cambridge Bay, out of sight on the left.  King William Island is about 150 km. from the northwest tip to the southeast.
The search proceeded by towing a submersible 'Underwater Archeological Vehicle' (UAV) back and forth through the water, 'mowing the lawn' in Parks Canada's words, gathering images of the sea bottom as well as the soundings needed for 21st century charts.  The images of the ships showed up quite quickly once they were located.  The Investigator, McClure's ship far off in Misery Bay on Banks Island, was found during a short search in 2010, while Erebus was found in 2014 and Terror in 2016.  It was actually a helicopter pilot's observation of a large metal artifact on the ground that provided the vital locational clue to the Erebus wreck's location. 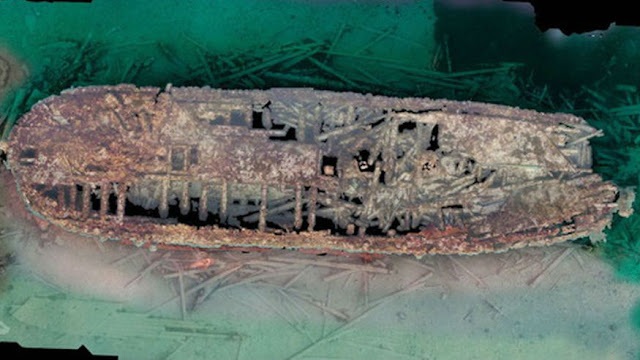 This is the Erebus, the ship found first.  Remember the searchers were working in a window of only 2-3 weeks in late August/early September when the ice was clear enough to do this.  You can see that this wreck is damaged a little, and part of the stern is missing.  Still the Parks Canada archeologists were thrilled to find the ship in such intact condition.
The finding of the Terror proceeded a little differently.  On the way to continuing the search, an Inuit member of the crew on one ship mentioned having seen a possible ship's mast sticking out of the water in Terror Bay on the south side of King William Island several years earlier.  The ship took a short detour for a quick look, and there it was!  (They were later criticized for taking a detour without permission).  And the Terror was in remarkably good condition, looking completely intact.  It turned out that the Terror's mast may have been sticking out if the water in Terror Bay for 150 years+ and nobody noticed!

In the four years since, Parks Canada has been diving on both ships, bringing to light artifacts that may help tell the history of the doomed expedition.  With such a short open water window, they have extended the season by cutting an opening in the ice for the divers.  Below an archeologist is using a hot water drill to cut this opening in April 2017. 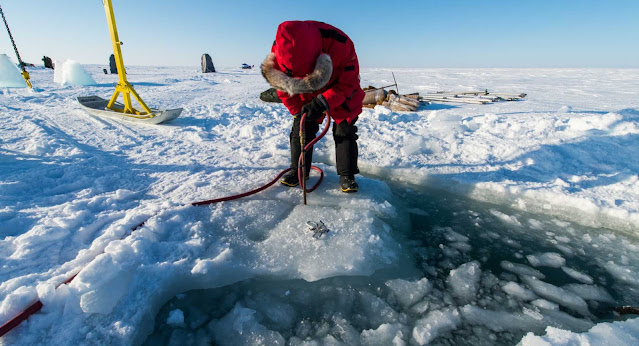 The sites are not yet open to the public, and may never be.  Inuit guardians have been hired from the closest town of Gjoa Haven on the southeast side of the island (see map above) to watch over the two wrecks.  The town is hopeful that an interpretive centre/museum will be built in the future, but of course already cruise ships are starting to visit and local interpreters give visitors some insight into the search and the ships, including the critical role that Inuit oral history played in the whole story. 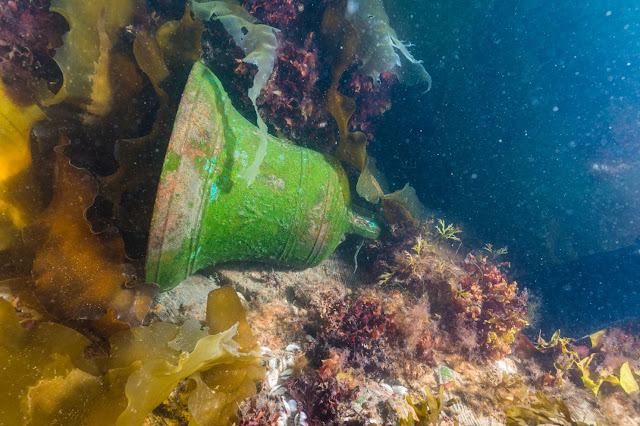 The is the ship's bell from the Erebus, a key item that helped in identifying the ship (finding it wasn't enough, they still had to be sure it was the correct ship!).  All the ships are covered with a growth of various marine plants and animals that needs to be carefully cleaned off. 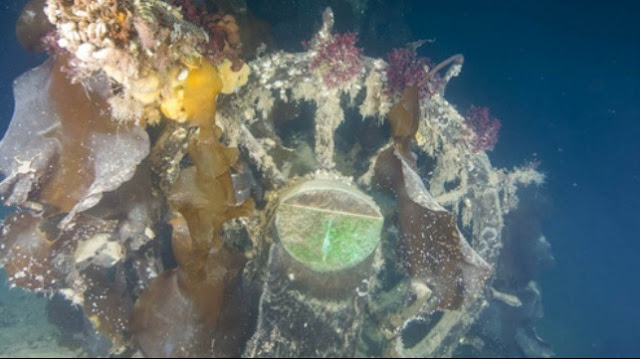 And this is the ship's wheel on the Terror.  On this ship searchers have found dishes and bottles still sitting on shelves, and cabins still arranged as if they were ready for their occupants.  Archeological investigation always goes slowly of course as the archeologists carefully document exactly where every artifact is found.  Most interior study of the ships to date has only been by underwater cameras

Some articles I have read express a hope that a ship's journal may be found, completely preserved in the cold Arctic waters.  That could tell a more complete story of the expedition's sad ending.  In fact, the condition and location of the Terror already implies an intriguing further mystery, as investigators are now suggesting that the men may have gone back to the Terror where it had originally been abandoned and re-sailed it, anchoring in a sheltered bay for protection where it settled gently on the bottom.

In any case, this is a story we certainly haven't heard the ending of.  Britain has now gifted the two ships to Canada and Parks Canada is managing the future of this fascinating National Historic Site.

Once I started reading Ice Ghosts I quickly realized how much the search for Franklinès ships (and Franklin's original expedition itself) had neglected Qauijimajatuqangit or Inuit traditional knowledge.  Inuit today, based on several generations of stories from their elders, knew of ancestors who had actually seen the two ships, in the final locations where they went down.  There are even stories of ancestors who had talked to some of Franklin's surviving men.  But we still largely ignored their knowledge even during the recent search for the ships.

During Franklin's day and the rescue missions which followed him, the prejudice against the Inuit was much more explicit.  As Watson writes, "One truth is eternal: Royal Navy prejudice toward indigenous people helped doom the Franklin Expedition, and the arrogant disregard for Inuit knowledge prolonged efforts to find out what happened to Sir John Franklin and the men he led to their deaths".

In spite of that it was Inuit oral history that provided most of the final clues to finding the ships.  Louie Kamookak was an Inuit historian living in Gjoa Haven who provided much of the knowledge, after interviewing many elders about their memories.  Hopefully we've learned something from this!