The Evolution of Nunavut's Communities

Returning to my series of posts on the Arctic and jumping up to the 20th century, I want to give you at least some impression of the Arctic today in the following five posts.  It's very much a unique place, and a world worth knowing more about.  In particular I'm impressed with how it's an Inuit society.  The land claims of these indigenous people were built into the negotiations establishing Nunavut, carved off the Northwest Territories in 1999 as Canada's third northern territory.  As the Inuit themselves are 85% of the population, through their elected assembly they control most of the Arctic territory.  There are no 'reserves' as elsewhere in Canada.

The Inuit are unique among indigenous people in North America in that they continued their traditional way of life, living on the land (and sea) well into the 20th century, many right into the 1950s.  They followed a seasonal round of activities, living in villages of 'iglus' on the sea ice in the winter while hunting seals (below), and moving to favoured hunting and fishing spots during the rest of the year. 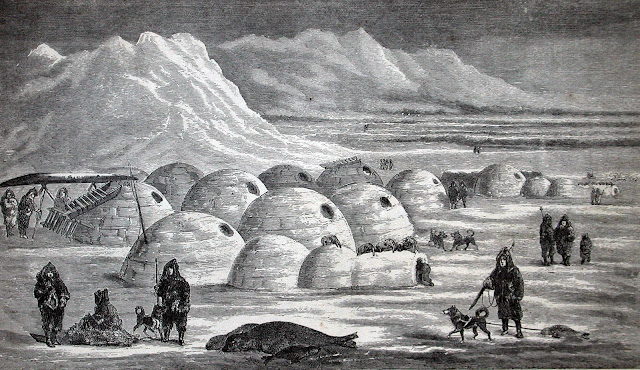 Hunting caribou during migration was important, so particular river crossings were returned to year after year.  Fishing for char and whitefish and gathering berries were important sources of food too.  Sharing and living together, though in small groups depending on food supply, was natural, as no one person had all the skills to survive.  Clothing made by the women was as necessary to life as were seals and caribou caught by the men.  Almost all families still get a major part of their diet from 'country food', hunted or gathered in annual excursions.
Inuit made kayaks for hunting seals, and umiaks, larger boats that could carry several people, for hunting whales.  They hunted Bowhead and Beluga Whales, mostly along the east coast of Baffin Island and through Lancaster Sound, as well as Walrus.  Traditional hunting and fishing camp locations underpin established communities today. 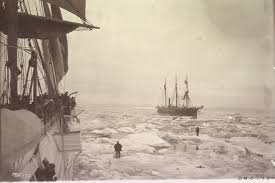 Traditional Inuit society began to bump up against European and later Canadian society with the arrival of the first commercial whaling expeditions from Europe.  As early as the 17th century whaling ships began to arrive, bringing with them the threat of disease, though direct contact with whalers was minimal until whaling stations were established.
In the late 1800s the Hudson Bay Company began establishing fur trading posts in the Arctic, and RCMP posts were established in the early 20th century.  Soon after missionaries began arriving in some locations.  Disease spread at the same time as the Inuit were becoming used to centralized services available at these outposts. 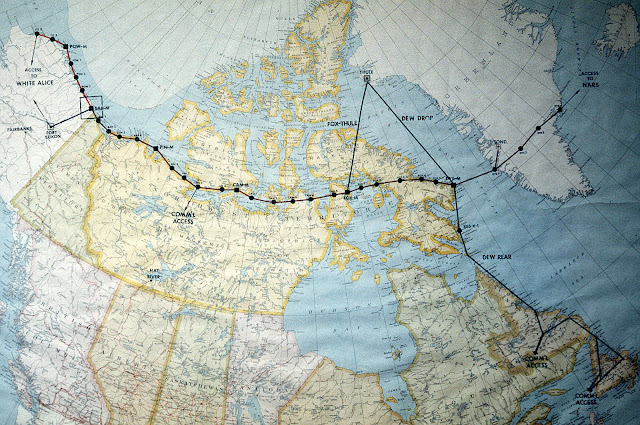 It was the establishment of the joint American\Canadian Distant Early Warning (DEW) Line across the Arctic in the mid-1950s that really kicked off the establishment of modern communities in the Arctic.  Bringing construction and jobs to the area, this brought the beginnings of the wage economy as Inuit were hired to work on the many stations along the line.  Several modern communities feature DEW Line stations nearby, though as the line has been modernizing there are fewer active stations needed.
By the 1960s today's Arctic communities were beginning to attract Inuit to live in one place most of the year.  As the federal government invested in hospitals, schools, harbours and other communal facilities, people concentrated more and more in these towns which grew rapidly.  Today almost all Inuit live in settled towns, though most families still spend some time 'living on the land'  every year. 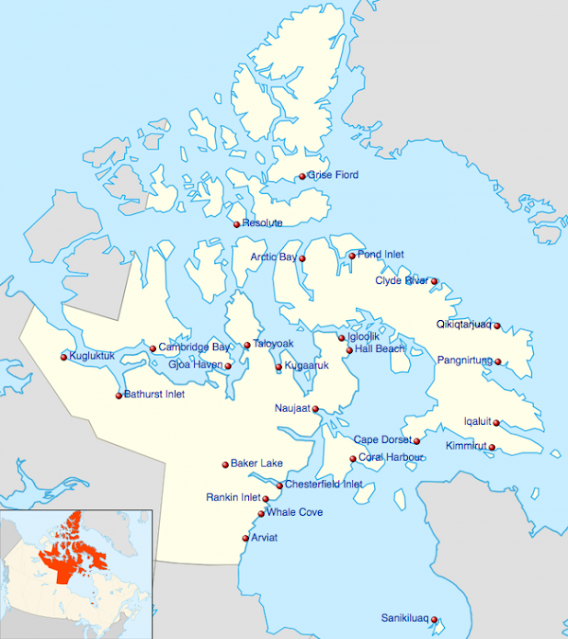 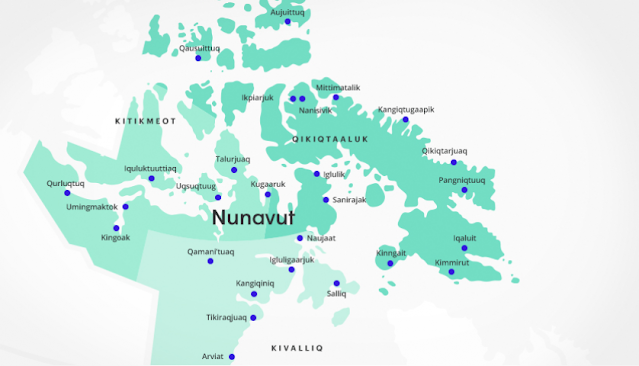 These two maps show the 25 or so towns in the Arctic, although in writing these posts I have chosen to ignore those towns on the northwest shore of Hudson Bay.  The first shows the commonly used English names, though Iqaluit, formerly Frobisher Bay, had already been renamed its traditional Inuktitut name in 1987.
Over time most communities are being increasingly known by their Inuktitut names shown on the 2nd map, though not all.  You can play with your pronunciation skills as you read these interesting names, all of which have a particular meaning such as 'place of good fishing'.  Some just roll of your tongue, but others are quite a challenge for me.  You will likely have to enlarge the second map to read the unfamiliar names.
Thus the incredible change from living off the land to living in the wage economy of settled towns has been dramatic and sudden, occurring over just one or two generations.  There have been both advantages and disadvantages to this transition.  On the one hand there have been the expected problems with mental and physical health.  Suicide rates, infant mortality, smoking, and several other health problems are worse in Nunavut than in any other place in Canada.  Housing was initially very crowded.  Gender roles have changed quickly, often leaving both men and women confused!
On the other hand, as students have gathered at regional high schools, and now in the Arctic College, they have built a broader and more modern community of young adults who have in turn fed a cultural and political revolution.  And certainly the education, health and harbour facilities have improved the lives of the Inuit. 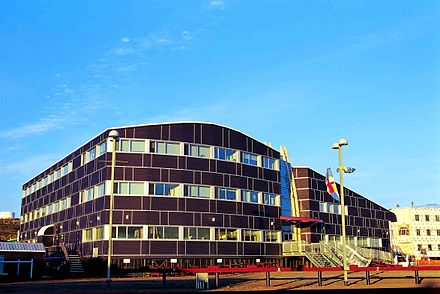 Today Iqaluit, the capital, is a bustling town of nearly 8000 people.  Iqaluit is the administrative centre for Nunavut, where the legislature stands as a symbol of Inuit control.  Here is the greatest concentration of government jobs, and in turn the largest group of young Inuit professionals.
Most architecture is simply functional, designed to withstand the cold climate and minimize use of expensive construction materials, but some buildings stand out symbolically.  The new St. Jude's Anglican Cathedral is obviously symbolic of an igloo, and the Nunatta Sunakkutaangit Museum featuring Inuit art and culture is actually a former Hudson's Bay Company post, moved, rebuilt and clothed in the traditional red and white colours of the HBC. 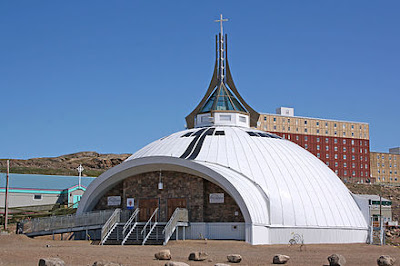 You will find these red and white buildings in many communities in the Arctic, repurposed for various things.  We saw one in Bathurst Inlet, a tiny seasonally occupied community we reached on our northernmost canoe trip, now used as Bathurst Inlet Lodge.
Iqaluit is the centre of a vibrant arts and culture scene, as all the major Nunavut festivals are held here.  It's the creative hub of Nunavut.  You can see Inuit throat-singing, watch unique Arctic sports like the one foot high kick or the knuckle hop, and shop for high fashion designs.  You can find all kinds of Inuit art, from stone sculptures through beadwork and jewellery to striking prints.  Nunavut has been said to have a greater number of artists and performers than any other place in the world, and a lot of them are concentrated here.
Tomorrow, some of the other communities on Baffin Island.