I have debated which comes first, the maps or the explorers and others for whom features on the map of the Arctic were named.  Historically the explorers come first, and the names of islands and waterways come second, but to understand the stories you pretty well have to know the names of where these people went.  I hope a little of that made sense, so here we go.

This is the one of the best general maps I have found of the islands and waterways of the Canadian Arctic.  It also shows some of the communities, but not all, and still uses English names for most of these.

I encourage you to follow along as we sort out where the Northwest passage actually is.  The first explorers did not get past Baffin Island, blocked in by a wall of ice between Bylot Island and Devon Island, an area now known as Lancaster Sound.  Try to find this spot, north of Baffin Island, as a starting point, where Dundas Harbour is shown on the map.
Later more successful explorers made their way west past Somerset Island and turned south opposite Cornwallis Island (where you see the hamlet of Resolute).  Prince Regent Strait did not take you anywhere, just down the west side of Baffin Island into the mostly dead-end Gulf of Boothia. 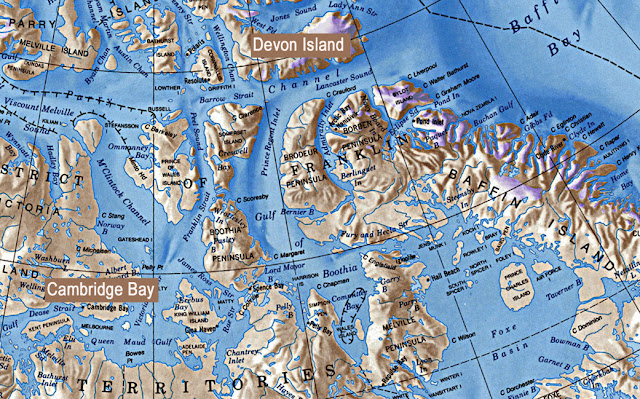 At this point we may be better to turn to this map, which provides greater detail for the central Arctic.  The body of water west of Somerset Island and east of Prince of Wales Island is Peel Sound, which changes to Franklin Strait as you emerge out into the (usually ice-clogged) MClintock channel.  You can see this in the map above, and you can see the ice pattern today in the satellite image in the previous post.  Are you following me so far?
It would make sense based on the map to go straight south through Victoria Strait into Queen Maud Gulf, but that route has proven to be an icy barrier.  In fact ships have almost always had to detour around the east side of King William Island, taking them through Ross Strait, Rae Strait and the unlabelled Simpson Strait out into Queen Maud Gulf from the east.  From here ships headed west through Dease Strait and onward through Coronation Gulf, Dolphin and Union strait out into Amundsen Gulf.  Check out the first map to see the rest of this route.
Sorry for all the detail here, but it will make the stories in the future posts more meaningful if you take a moment to trace out this route now.  The following map showing routes followed by much later explorers provides a good summary and shows how recently Arctic exploration finally succeeded. 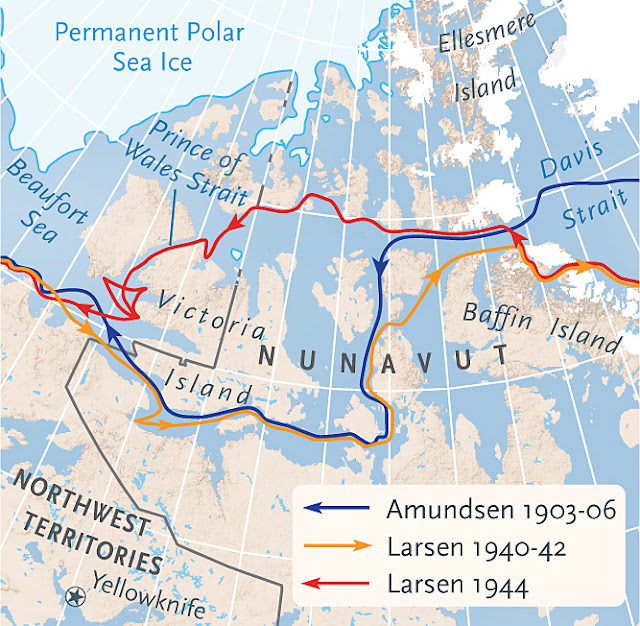 Amundsen was the Norwegian explorer who first made a complete voyage through the Northwest Passage, sailing on the route I have described (in blue).  He stayed two winters on the east side of King William Island, in what he described as 'the finest little harbour in the world'.  He called it Gjoa Haven after his ship the Gjoa.  Larsen was the first to sail through the Northwest Passage in both directions, (shown in red and yellow), sailing in the diesel-powered St. Roch, a ship specially built for arctic patrols of the RCMP.  Larsen was an RCMP office in the Arctic for 20 years.
The second route followed by Larsen is notable, for it has become the northern route of the Northwest Passage.  Clogged with ice during most early exploration years, today it is much more likely to be open water and passable.  It proceeds west from Lancaster Sound where others usually had to turn south, passes south of Cornwallis and Bathurst Islands, turning south at Melville Island to head down the Prince of Wales Strait and out into Amundsen Gulf.  Certainly a simpler and a little shorter route, but less interesting for the cruise ships that are taking adventurous travellers north today.
The Victorian Era Names
You probably have the impression by now, that this is a landscape of names transferred from Victorian England.  And you would be right.  Most Arctic mapping occurred during all the expeditions sent out to search for Franklin during the mid to late 19th Century.  The most popular category of names are those of the explorers themselves.  Next, there are a number of royal names, and after that a scattering of other English Lords, often associated with the Admiralty.
Starting with Baffin Island, we also have Bylot Island, Frobisher Bay, Davis Strait and Hudson Bay all named after the earliest explorers.  Later we add Franklin, Ross, Rae, Simpson and Dease Straits, also all named after Arctic explorers.  Royal references are first generic, as in Prince of Wales Strait and Prince of Wales Island, as well as Coronation Gulf, and then specific as in Victoria Island and Queen Maud Gulf.
If you do not recognize Queen Maud, she is the youngest daughter of King Edward VII, and reigned as Queen Consort of Norway as the wife of King Haakon VII from 1905 to 1938.  The Gulf was named after her by Roald Amundsen, himself a Norwegian (so she was his queen), during his voyage noted above.
Other names we find include names of English Lords, as in Somerset and Devon Islands, English Naval figures such as Viscount Melville, Lord of the Admiralty, or expedition sponsors such as Lancaster and Booth.  In a rare bow to science the westernmost island in the Arctic is Banks Island, named after Joseph Banks, the great British naturalist who sailed with to the south Pacific with Captain Cook in 1768.

This has been a somewhat dry and detailed post, but I hope it helps you as we move on to more interesting stories.

After posting and reading yesterday's post, I thought it was far too detailed and academic, so I'll try to keep it simple!  But after all, I was an academic, so this is my style.  It's been very much like preparing lectures, but I hope you get something out of it.  I certainly have!

I'll repeat the map from the first post here if you want to refer to it. 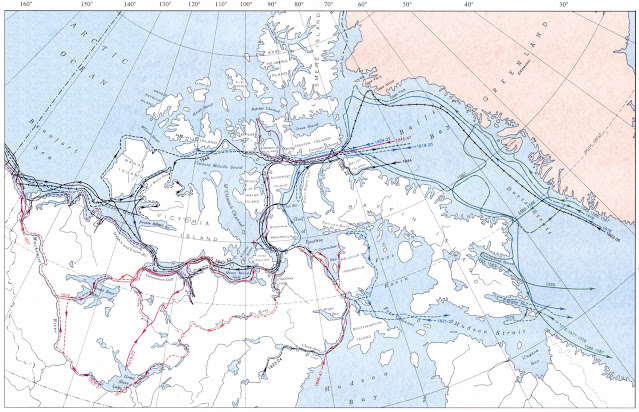