In 1845 Sir John Franklin set sail in the largest and best equipped expedition ever sent to the Arctic, determined to map the remaining gap among the islands and waterways of the Northwest Passage.  We later learn from the only note he ever left, that he entered Lancaster Sound and proceeded west without trouble until he ran into ice.  After spending the first winter on tiny Beechey Island (where three graves were later found) he turned south down Peel Sound between Somerset and Prince of Wales Islands and emerged into the southeast corner of McLintock Channel.  So far so good.  Beechey Island is now a National Historic Site and a popular stop for today's cruise ships.

The ships he took, the Erebus and Terror, were well suited to the trip.  They were 'bomb ships', built extra strong to withstand the shock of firing cannons, and then strengthened further to withstand the ice.  They had steam engines added for this trip. They had already been to the Antarctic on an earlier trip.  These two ships become a big part of the Franklin story, which we will pick up on later. 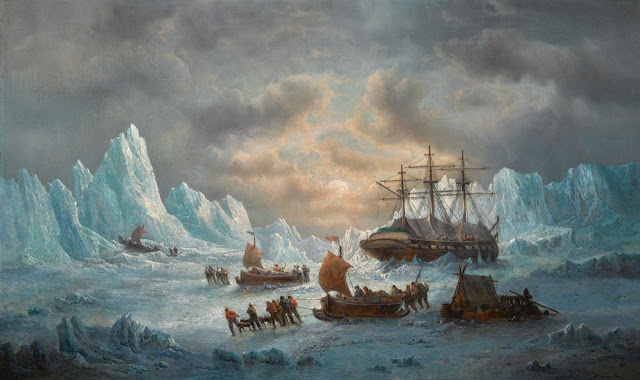 We do not know exactly where Franklin got frozen in the ice, but he did, and spent two years there.  Whether he sailed south and got trapped or got trapped and the ships moved south with the ice pack is unknown.  Even though these sailing ships had auxillary steam engines, they were no match for the power of the ice.  In any case, as we now know the ships remained frozen throughout the summer of 1847, bringing the risk of starvation ever closer.  Sir John himself died in June of 1847.

As a point of interest we have lots of paintings and drawings of the Erebus and Terror, some totally fictitious, and some accurate because the artists painted the ships while seeing them in London.  None of the artists were actually on the trip though. 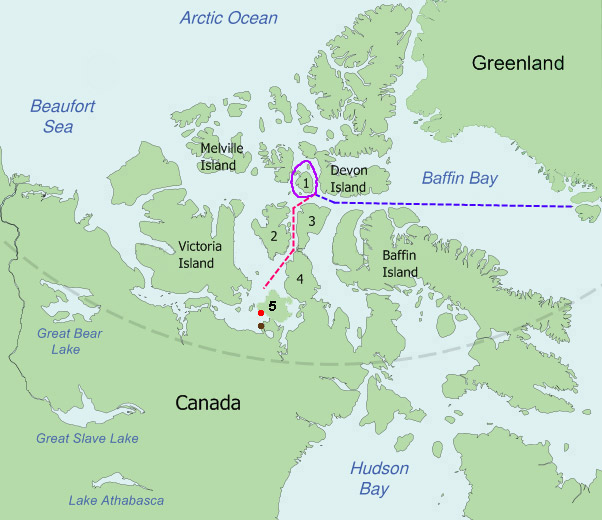 We do know the approximate route Franklin followed, based on the one note he left.  Crossing from Greenland he entered Lancaster Channel south of Devon Island, and made a circuit to the north around Cornwallis Island before settling on Beechey Island for their first winter.  The next summer they sailed south through passages that were open that year (but not for several later years when searchers got there).  The trip ended where the bright pink line on the map ends above, near the northwest corner of King William Island.
It was along the west shore of that island where most of the later evidence of the failed trip was found, including abandoned food, supplies, equipment and food, as well as skeletons.  Two of the skeletons were found in a small boat, with two loaded guns.  It appeared that some sailors died as they walked on their trek away from the ships, falling down in their tracks. 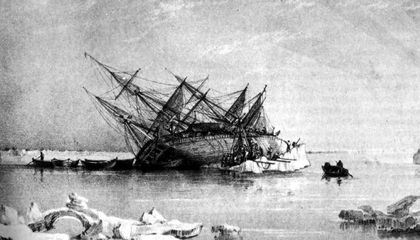 By early spring of 1848 the 105 men remaining abandoned ship and moved to the shore of King William Island, hoping to trek south to the mainland.  All of them starved to death, never asking the native Inuit for help.

The missing expedition set off the biggest burst of arctic exploration ever and Lady Jane Franklin became the biggest influence, cultivating a huge public following as she pushed England to find her husband or his fate.  In the following two decades at least 30 expeditions set sail in search of the missing Franklin.

In 1848 the Admiralty sent out three searches, all of which proved unsuccessful.  Richardson and Rae (more about Rae later) approached overland from the south but ended up far west of Franklin's location.  John Ross sailed from the east but got frozen in ice far to the north.  Henry Kellet sailed around South America, up past Alaska and approached from the west.  None found any evidence of Franklin or got close to where we later learned the ships were lost. 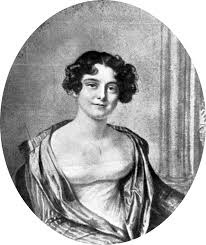 At this point Lady Jane Franklin upped her crusade to have her husband found, or his fate determined, even funding expeditions out of her own modest fortune.  The result was all the Arctic expeditions of the following years.  In 1850 alone 20 vessels set out to find Franklin, though none of them were successful.  Numerous voyages occurred in succeeding years.

Notable was Robert McClure's expedition which entered the Arctic from the west.  Although McClure and his crew spent four years locked in the ice in Misery Bay on the north shore of Banks Island, (he was heavily criticized for his management of the trip) he did discover the Prince of Wales Strait far to the northwest of Franklin, which became a key alternate route through the Arctic.  At the time he was given credit for discovering the Northwest Passage, even though a key part of this route, below Melville Island, was ice-clogged and impassible.

McClure and crew were rescued by Henry Kellet, mentioned above, and he was knighted and rewarded for his discovery. But he had to abandon his ship the HMS Investigator, only found in 2010 during the recent Parks Canada search for Franklin's ships.  The Prince of Wales Strait is a popular alternate route today as the Arctic climate warms and there's less summer ice cover. 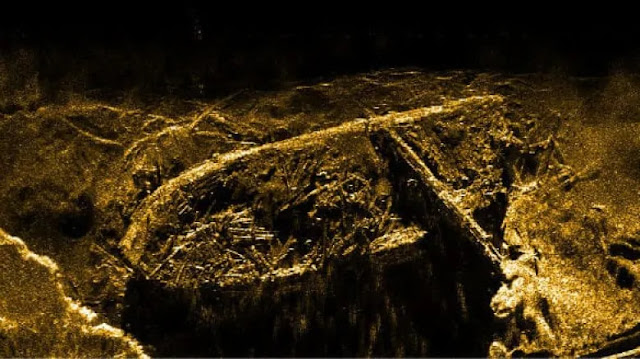 Wreck of the HMS Investigator
John Rae returned to the Arctic in 1854, approaching from the south overland, to the base of the Boothia Peninsula.  Here he encountered Inuit who had among them a gold hat band, obviously a relic of the Franklin expedition.  He offered to purchase any other relics, and soon ended up with several.  One of the artifacts was a silver plate with "Sir John Franklin" engraved on the back.  As well Rae learned of skeletons found by the Inuit and reports of a group of white men who had starved to death a few years earlier. 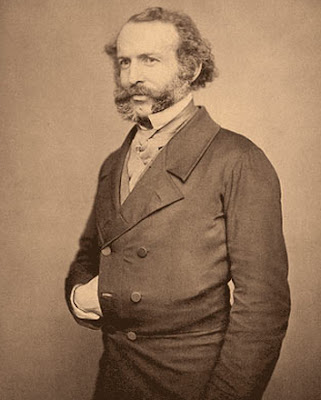 John Rae
In his search Rae followed the shoreline south, east and north of what was then called King William Land, showing it to be an island.  The water to the east of the island is now known as Rae Strait.  In so doing it has been argued that Rae discovered the last link in the navigable Northwest Passage, the other main route used today.   He received an award for finding out the fate of the Franklin expedition, but because of his reports of possible cannibalism, which was abhorrent to the English, he was never awarded a knighthood, nor statues, and was not recognized as the discoverer of the Northwest Passage, unlike Franklin himself.
It was over a decade after Franklin disappeared, in 1859, when the men of the McLintock expedition, building on the information Rae had established, found a note from Franklin buried in a cairn on King William Island. This is so far the only written record of the Franklin voyage, telling us that Franklin died several months before his men abandoned ship.  Thus any allegations of cannibalism could not apply to him, which was a relief to Lady Jane.
Several later expeditions pursued the fate of Franklin, right into the 20th century.  Notable are trips by Charles Frances Hall and Frederick Schwatka, both Americans, in the 1860s and '70s.  Both of these men relied on, and documented, Inuit advice and stories, including some by natives who had actually met members of Franklin's group.  The reports of those expeditions provide much of the detailed information upon which modern searches for the two ships has relied, as shown in the map below. 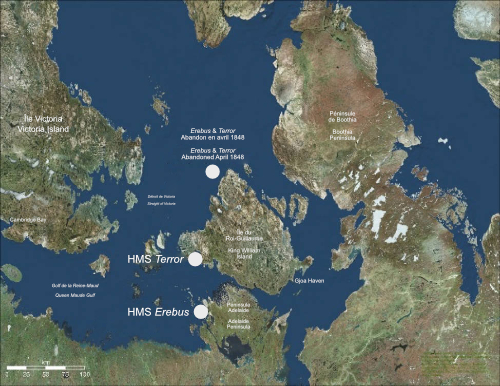 This final map shows the approximate locations where the Erebus and Terror were apparently caught in the ice northwest of King William Island, as well as the two sites on the south side of King William Island where the ships have ultimately been found, based on 19th century information sources, largely Inuit testimony.  The route around the east side of King William Island is the last 'missing link' in the Northwest Passage, as Victoria Strait to the west of the island is normally impassible with ice.  I will devote a full later post to the ultimate finding of the Erebus and Terror, in the past few years.
*********************
After these five posts I'm going to take a break and go back to my regular blog posts, before we return to the Arctic today with a further five posts.

In the meantime, a neighbour referred us to a series of videos on the Arctic under the title 'Canada Over the Edge'.  We found them on the Smithsonian Channel on YouTube, and have really enjoyed them.  I recommend the ones on the High Arctic and the Central Arctic.  You'll have to search for them on YouTube.