Overland to the Arctic

There was a long gap between the Baffin/Bylot expedition in 1616 and the first explorer to reach the Arctic overland, Samuel Hearne, travelling as a fur trader on behalf of the Hudson Bay Company in 1770.  Alexander Mackenzie did the same, but working for the Northwest Company following the Mackenzie River in 1788.

Then there's an interruption again as the Northwest Company and the Hudson bay Companies feuded over the fur trade further south.  The HBC eventually won, with British connections and more money and took over the NWC in 1821.  The Hudson Bay Company is still around today, mainly as a department store chain.

At the same time the British Royal Navy was embroiled in the Napoleonic Wars.  When these ended and the Royal Navy was looking for other challenges to keep itself busy, Arctic exploration from England began anew.  In 1819 two expeditions were sent out, one led by John Franklin and one by William Parry.  Franklin was to approach the Arctic coast from the south via the Coppermine River, and Parry was to sail from the east into Lancaster Sound.  Four years later Franklin led another overland expedition, this time going down the Mackenzie River.

First we turn to the stories of Samuel Hearne and Alexander Mackenzie.  Hearne joined the Hudson Bay Company in 1766, working out of Churchill as a fur trader.  Stories about natives to the northwest using copper had been heard for some time, but when a visiting native arrived at Churchill with lumps of copper, it was apparent that someone should go and investigate this. 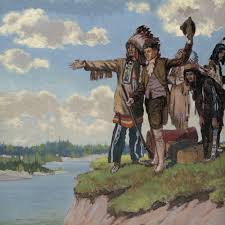 Hearne and natives on the Coppermine
The story of Hearne's first two journeys is about his reluctantly learning to travel and live off the land as the native Indians did.   The small number of white fur traders nearly starved on both trips, walking on snowshoes and carrying heavy packs.  Ultimately, having learned his lesson, Hearne went alone on his third trip with a group of Chipewyan guides led by one with the name Motonabbee.  It took them six months of walking to reach the Coppermine River, using a group of Motonabee's wives as cooks and 'beasts of burden'!  But they never found significant deposits of copper.
Near the mouth of the river they stopped by an Inuit camp hunting caribou.  In the middle of the night the normally peaceful native Indians accompanying Hearne fell on the Inuit, killing them all in what would become known as the Massacre at Bloody Falls.  The attack reflected centuries of conflict between the Copper Indians and the Copper Inuit who both frequented the area.  Hearne successfully returned to Churchill after walking some 5000 miles. 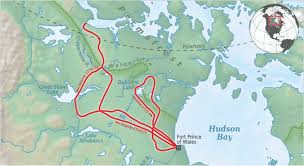 Hearne reached the Arctic coast but did not explore along it.  However, by travelling north from Hudson Bay he had proven that no western-heading water route to the Pacific existed.  The copper turned out to be just a few small lumps, so no booming copper mine emerged, but both the river and the settlement at its mouth were named Coppermine after the native use of the area.

Alexander Mackenzie, whose name is much more known to Canadians, was the next explorer to reach the Arctic coast, but he did so by mistake.  He had been searching for a route to the Pacific.  Another fur trader, but an employee of the North West company, he headed down the waterway from Fort Chipewyan on Lake Athabasca in 1788, hoping to reach Cook Inlet in Alaska.  Finding the Arctic Ocean instead he named the river the River Disappointment.

On the other hand, this was the man who 5 years later did successfully reach the Pacific, by way of the Peace River, and an upper stretch of the Fraser.  Warned by natives that it was impassible downstream on the Fraser River (think Hell's Gate!), he headed over the Coast Mountains instead, emerging on the Bella Coola River at Bella Coola, the first white man to reach the Pacific overland.  The famous Lewis and Clark expedition in the U.S. was 12 years later. 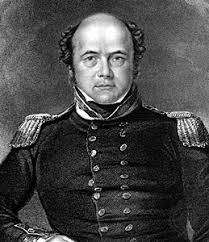 Thus we come to the British Naval Officer, John Franklin, the next explorer, more than two decades before he was frozen in the ice on his final voyage.  The British Navy was looking for things to do after the end of the Napoleonic Wars and decided to get back into arctic exploration.  By this time there was no reasonable expectation of finding an easy ice-free Northwest Passage, but it was still a story that intrigued the public and might help the navy's reputation.  And Franklin was looking for a personal challenge that would enhance his own reputation.

In fact Franklin's two trips to the Arctic coast in 1819 and 1823 were what won him his heroic reputation and a knighthood, not his later unsuccessful voyage.  On these occasions Franklin was sent not in a ship but overland.  He first followed Hearne's route to the mouth of the Coppermine, and explored east and west along the Arctic coast, the first white man to do so.

Franklin had had access to Hearne's journals, and had received personal advice from Mackenzie, but it wasn't enough.  Perhaps the Royal Navy relied too much on promises of support from the Hudson Bay Company.  In any case the locals later criticized Franklin for his poor planning and organization.  Unfortunately the expedition didn't get very far along the coast, lapsing into starvation, as the caribou migration had been unusually early that year.  Eleven out of 20 men died on this expedition, and the others only survived by eating the leather of their boots.

Franklin had taken an evangelical religious book along for daily reading, and he later wrote that it had provided great comfort in his times of enormous distress.  In any case the public showed geat interest in his story when he returned home, seeing him as a 'hero who had  survived with Christian fortitude'. Three years later he travelled down the Mackenzie River to the Arctic coast on a trip that was much successful, perhaps because provisioning was handled by the Hudson Bay Company rather than the Royal Navy! 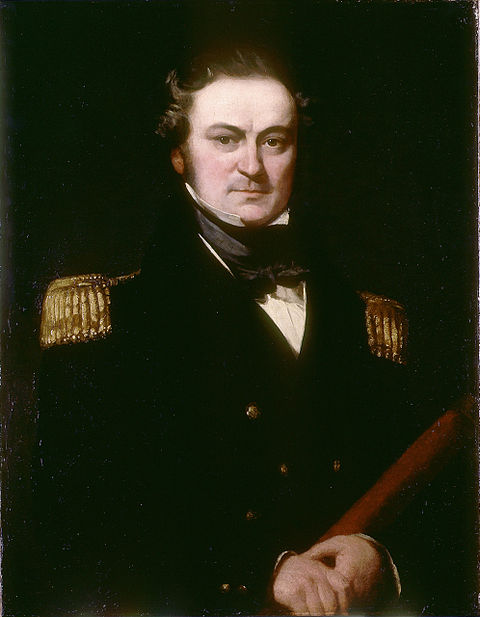 While Franklin was exploring from the south the Royal Navy sent Captain William Parry from the east.  Franklin and Parry knew each other, and the two separate efforts were seen as a major joint effort by the Royal Navy.  Parry didn't give up in Lancaster Sound but pushed his was west through the ice, through Barrow Strait and into Viscount Melville Sound, the farthest west anyone had reached by ship.  Perhaps 1819 was a relatively ice-free year.  Together with McClure Strait to the west this route became known as Parry Channel, one of the modern routes through the Northwest Passage now that ice conditions are moderating.

They wintered on Melville Island, frozen in for 10 months, 3 months in total darkness, and survived temperatures that reached -54°F!  They only floated free in early August 1920 and barely made it out of the Arctic before the ice froze around them.  But it was the most successful expedition in search of the Northwest Passage yet, and they only lost one man. 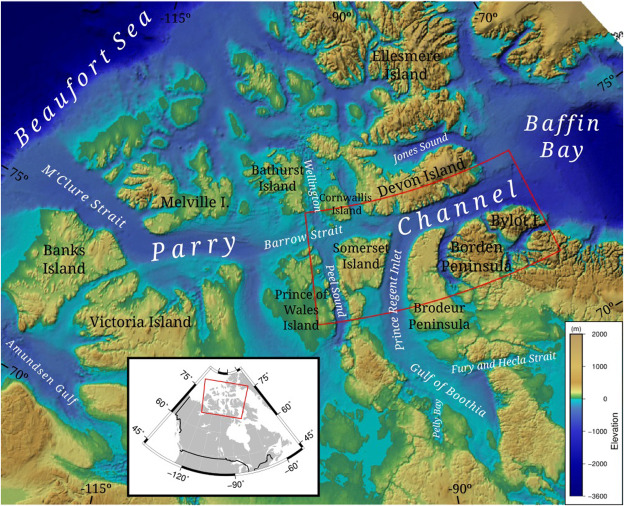 Going back to our overland explorers, John Simpson came next, travelling north a decade after Franklin.  His goal was to fill in the two gaps in shoreline mapping, to the west and east of Franklin's trip.  Simpson did this successfully,  He travelled down the Mackenzie the first summer, mapping as far west as Point Barrow.  Then he travelled down the Coppermine the following year and explored east as far as the base of the Boothia Peninsula, surveying as he went.

Thus the entire Arctic coast had been mapped to the mouth of the Back River in the east by overland explorers and Parry had mapped the Northwest Passage as far as Melville Island by sea.  There remained the 500 mile gap between these routes, the unknown blank in the middle of the Arctic map.  This was the area that Franklin targetted in his fateful voyage of 1845.