I've divided the Arctic explorers into three groups, first the very early explorers who sailed between 1576 and 1616, second a group who approached overland from the south in later years, and finally those who came in search of the frozen Franklin after 1845.

Martin Frobisher sailed in search of the Northwest Passage three times, between 1576 and '78, never getting further than the southern end of Baffin Island where Frobisher Bay is named after him.  During his first voyage he got distracted by thinking he had found coal.  At one point his fleet was blown into what is now Hudson Strait, but Frobisher named it Mistaken Strait, thinking it would not provide a route west.  Instead he believed the narrow Frobisher Bay (which went nowhere) would be the route.

His third voyage was a fleet of 15 ships no less, in search of the 'coal'.  Gathering a good supply he sailed home with his valuable cargo, only finding out on his return to London that it was worthless rock. 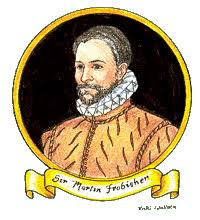 Frobisher was followed by John Davis a decade later in 1586.  Again he got little further, but he did give his name to Davis Strait, between Baffin Island and Greenland.  Each of these explorers and the many to follow added a small piece of the mapping that was eventually to lead to an understanding of the northwest passage. 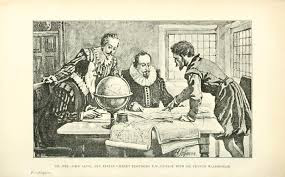 One can picture the sailing captains and English cartographers examining maps and notes from previous voyages, attempting to fill in more of the Arctic map.  This is said to be Davis and 3 colleagues.  All the early explorers were seeking an easy passage to the Pacific Ocean and the East Indies.
Davis was followed by Henry Hudson, who in 1610 sailed into Hudson Strait and hence discovered Hudson Bay, exploring it before being locked in ice for the winter.  Sadly his men mutinied in the spring and set Hudson and seven others adrift in a small boat; they were never seen again.  However, it could be said that Hudson's discovery was more successful than any further north, as Hudson's Bay became the route ships used to the first fur trading fort of the Hudson Bay Company, at York Factory in 1684.  It operated until 1957! 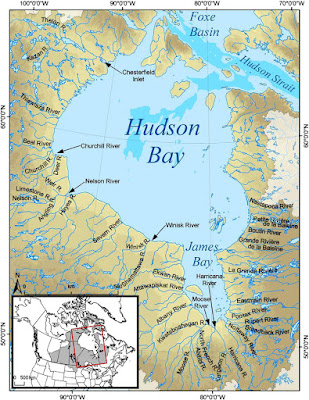 Hudson Bay, a large saltwater extension of the Arctic Ocean in central Canada.
York Factory was at the mouth of the Nelson River.
(Hudson had been even more successful further south when he was sailing earlier under the Dutch flag, for he it was who sailed into the Hudson River and claimed 'New Amsterdam' for the Netherlands - now the site of New York City.)
Returning to the Arctic though, we find Robert Bylot and William Baffin sailing in 1616.  Bylot had been first mate on Hudson's voyage into Hudson Bay, and only narrowly escaped death on returning to England where he was tried for mutiny.  But it was said that his navigation skills were what enabled the crew to return to England safely after the mutiny, and he was pardoned.
He sailed with Baffin into what is now labelled Baffin Bay, the large body of water between Canada's Arctic and Greenland north of Hudson Strait.  They circled further north than anyone else would for another 236 years.  It was so far north that their mapping wasn't believed, but centuries later it proved to have been extremely accurate.  They also discovered that Lancaster Sound was not merely an ice-choked bay, but a channel leading further west - the channel that would eventually become the easterly end of the northwest passage. 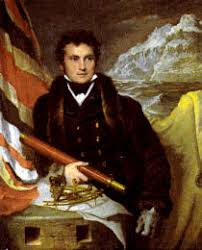 William Baffin
Baffin was the one who got the credit back in England, perhaps because he was of higher class while Bylot was only working class.  Both got islands named after them, but Baffin's was considerably larger!
It only took these early voyages for the British to realize that there was no easy ice-free route to the Pacific, and they diverted their efforts further south on the globe.  All these explorers ran into walls of ice that prevented them from sailing further.  Of course we have no accurate mapping of ice coverage at this time, but climate scientists do talk of a 'Little Ice Age' about these centuries.  It may have been that ice coverage was simply much worse than explorers sailing into the area found 200 years later.
Next we look at explorers who approached from the south, following the fur trade routes overland,  starting over 150 years later.  Many of you have probably read at least a little about Sir John Franklin, the (in)famous Arctic explorer whose two ships, the Erebus and Terror, got frozen in the ice in 1847, leaving him and his entire crew of 129 men to starve to death.  But few who read those stories realize that Franklin first reached the Arctic overland, as the first explorer to map part of Canada's northern mainland coast.
Personally I find it very ironic that the best known Arctic explorer, and the one most honoured by the British, led the expedition that was a total failure!
Posted by The Furry Gnome at 2:04 PM