After my post on the monumental Inukshuk in Collingwood, Georgina asked if I could provide more detail on Inukshuks.  Her request sent me off to do some research about it myself, so this is what I've learned.

First, the term itself is evolving.  The Canadian government and the government of Nunavut (Canada's Arctic territory) both prefer the spelling Inuksuk, plural Inuksuit, so those are what I'll use.  However the English spelling Inukshuk, plural simply Inukshuks, is widely used now, and the term seems to be evolving in that direction. 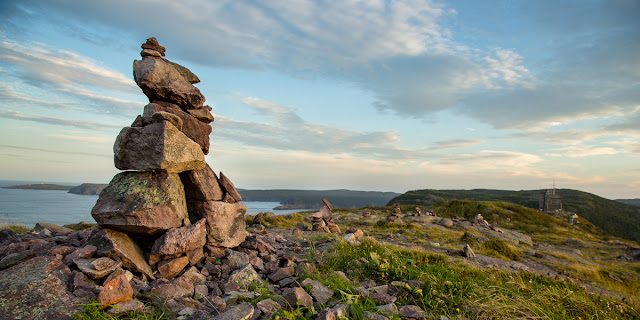 Inuksuit are rock cairns built in the Arctic by Inuit people for a variety of purposes, from navigation across the trackless tundra to indicators of good hunting or fishing spots to safe or dangerous river crossings or food caches.  However some are built as memorials, and any ancient Inuksuk may be venerated as a symbol of the ancestors who built them.
The actual form of the cairn is dependent on the rocks or boulders available at the site.  Round boulders simply don't pile up as well as flat-sided ones.  Rocks that split horizontally make for easy Inuksuk building.  Some date as far back as 2400 BCE.  All Inuksuit are a symbol of pride for the Inuit, something that both indicates their ancestors were here before and are unique to their culture. 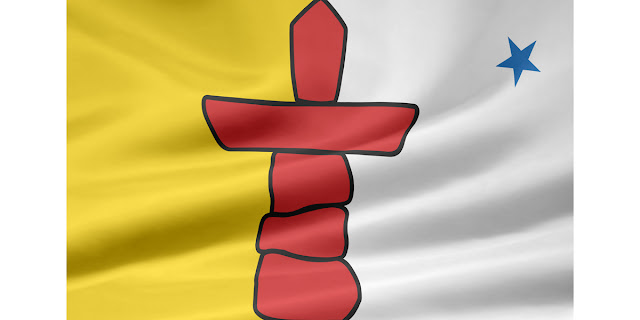 The flag of Nunavut has a bright red Inuksuk in the centre, which says a lot about how these Arctic dwellers feel about their culture.  The star in the upper right symbolizes Polaris, the North Star, a vital navigational beacon for the entire north.  Nunavut itself corresponds to the land beyond the tree line, occupied by the Inuit people.  The capital is Iqualuit on Baffin Island.
However, even with this background we're still using the term 'Inuksuk' incorrectly.  An Inuksuk-like rock figure built to look like a person, with visible arms, legs and head (the popular image of an Inuksuk), is actually an 'Innunguaq' - pronounced 'inungwaw'. 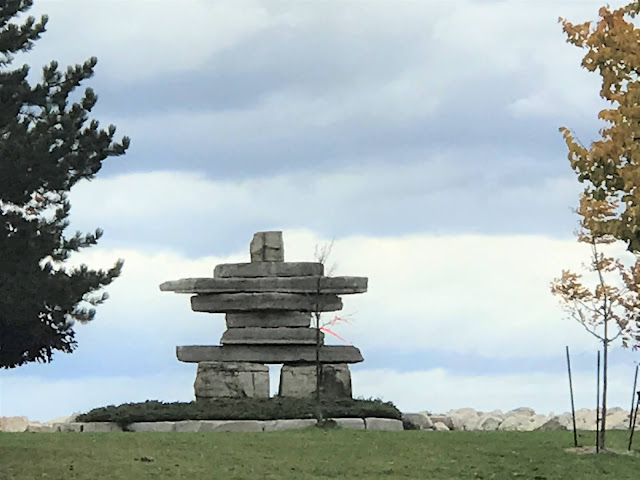 This giant Inuksuk in Collingwood that I shared with you earlier is therefore actually an Innunguaq, so now I've learned something new myself.  But I don't expect that term to supplant 'Inukshuk' in popular culture anytime soon!
Regardless, the term Inukshuk is in very wide use, and both small and very large Inukshuks can be found widely in Canadian culture, in the form of everything from keychains through garden ornaments to huge statues.  A large Inukshuk adorns the lobby of the Canadian Embassy in Washington, and it was used as the symbol for the Vancouver Winter Olympics in 2010.
This example of cultural appropriation by Canadians seems to be mostly, though not entirely, without controversy.  It reminds me of the tiny Celtic Cross that I have hanging at my shoulder, bought as a souvenir from the Isle of Iona in Scotland, and a real spiritual symbol for me.  An Inukshuk is widely seen as a symbol of pride in ourselves as a northern nation so seems to me to be a positive example of adopting something from another culture.  I expect most Canadians know where they originate, though most would not know that the common form you see them portrayed as is actually not an Inukshuk but an Innunguaq.
I found the best short discussion of Inuksuit was in the Canadian Encyclopedia, an article which includes a short video of Peter Irniq, an Inuit himself, explaining what an Inuksuk really is.  I thought it was very well done.  I have copied the first two images above from the internet for what I hope is a valid educational purpose.
Hope you've learned something new as I did preparing this post.