We were off to Collingwood to see another new doctor this morning, a nice drive even though it's the coldest day of the year so far.  The office, easily wheelchair accessible, overlooked the old ship-building slips in the harbour and we took time to drive out to the old grain elevators before heading home. 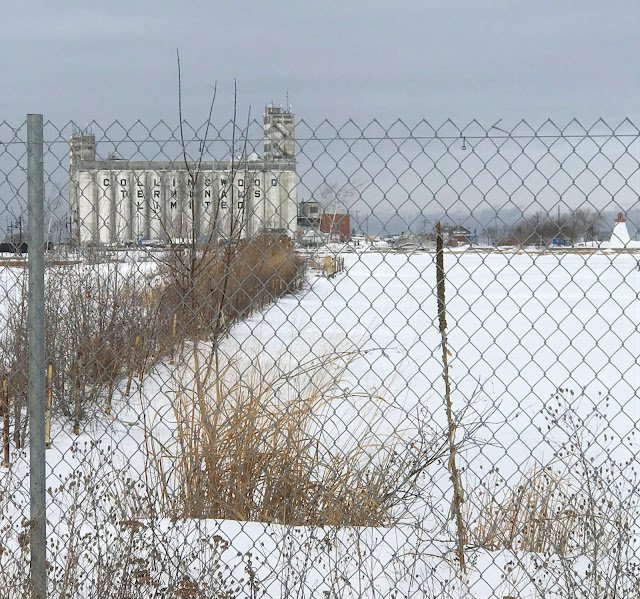 You're looking right down one of the two remaining ship-building slips where Collingwood's busy ship-building industry was concentrated for 104 years, ending in 1986 when the last ship, the Coast Guard's Sir Wilfrid Laurier was launched.  They built 200 ships in their time, mostly lake freighters plus a group of naval vessels during WWII.  As I'll explain in a future post, the entire area is now being redeveloped for townhouses and condos.

It was a side-launch basin, so you'll understand why they named a new craft brewery here the Side Launch Brewing Company.  You can't see a ship getting side-launched any more, but you can enjoy a cold Sidelaunch beer.

It was -22°C (-7.6°F) this morning, the coldest day of the year so far.  Though that's really not very cold yet; we usually get at least a night or two of -30°C, which helps kill off the bugs.  Mind you, with the windchill it was -31°C, which makes it uncomfortably cold for skiing and snow shoeing!