The New Stew Hilts Side Trail

I've spent the last two days writing an article for the local Bruce Trail Club's newsletter, so that's what you get today.  Hope it's of interest even if you don't live locally.


The New Stew Hilts Side Trail


First of all, let me express my deepest appreciation to the club for naming a new side trail in my honour.  It goes through some beautiful forest and ends up at a ‘secret’ waterfall, so it’s pretty special.  The Cuckoo Valley Overlook property owned by BTC is a wonderful place for other reasons too, beautiful big trees, a wonderful view of the valley, and spectacular fall colour.

We had a grand gathering in early June to officially open the trail, with speeches that were far too long, but it was a memorable occasion for Maria and I, with many of my Bruce Trail friends.

The gang at the official opening.
(Stew, Maria and his sister Marilyn centre front)

The main trail through Cuckoo Valley Overlook runs from the Johnson’s Sideroad parking lot (km. 70.1) east and then south into the forest along the western slope of the valley.  The forest extends south to the waterfall and the stream that feeds it, but you only get a limited view of the falls disappearing over the lip of the rock.  The trail then turns uphill and follows the stream for a short distance before turning south again and heading up to the crest of a hill.  This is the ‘overlook’, and the view is spectacular.

Cuckoo Valley is the narrow cliff-bound valley rimmed with cedars below Eugenia Falls, showing up in the photo as a dark valley on the upper right horizon.

The new side trail leaves the main trail while you’re still in the forested section, and dips east, further downhill, before turning south again.  Marked by the usual blue side trail sign and blazes, it takes you through the woods to the base of the waterfall. 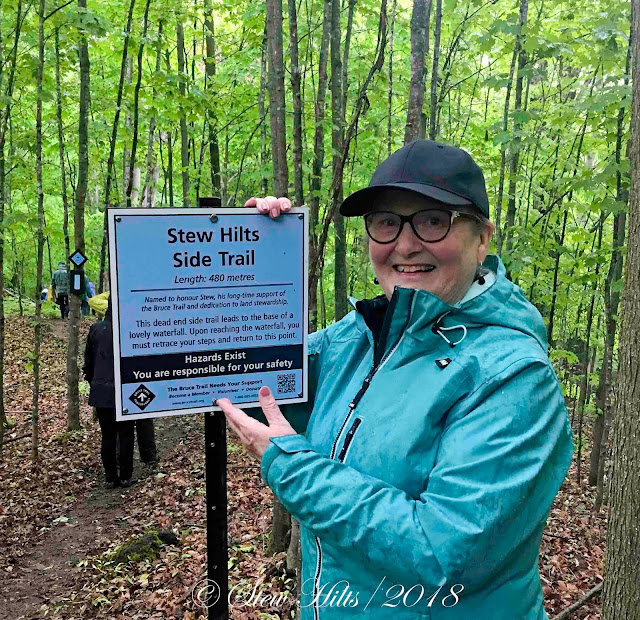 Stew’s sister Marilyn and the new side trail sign. 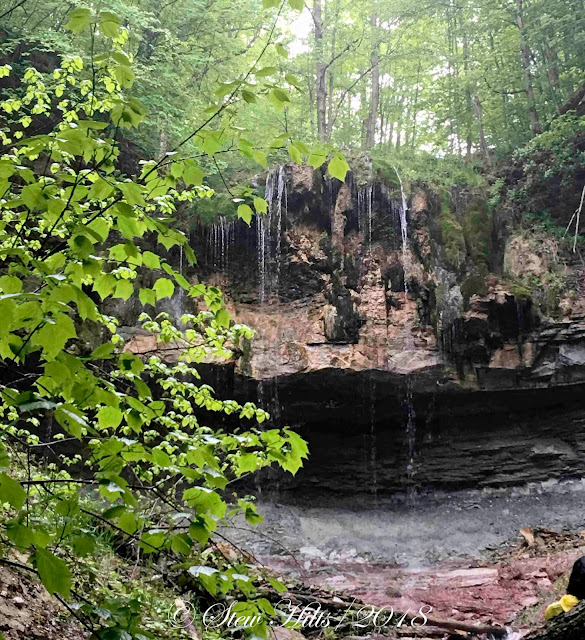 Adding this new side trail makes much more use of the large Cuckoo Valley Overlook property, and adds some extra interest for hikers.  It also makes a shorter hike if you don’t want to go uphill all the way to the overlook!

The idea for this side trail was floated several years ago by Cathy Little, the Land Steward then, and myself.  In fact the first time I found my way down to below the falls, I had snowshoed in during the winter.  The falls I found was a spectacular sheet of ice!  The slopes beside the waterfall are impossibly steep, as you can see below, so the plan is to build a viewing platform from which to view the falls, as soon as funding can be found. 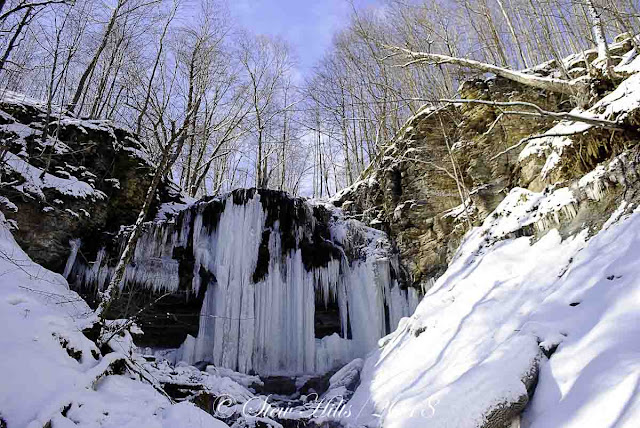 The trail through Cuckoo Valley Overlook is great at any season, and with both the crest of the hill and the waterfall as destinations, it’s a great hike.  The main trail among those trees on the upper right of this photo skirts the waterfall, but with no view of the falls, you don’t even realize that this is down below you.  Now there’s a way to get down and see it.  Hope you get to enjoy the new side trail sometime.

Photo Credits to Marilyn Hilts, Ned Morgan and Stew Hilts
Transferred this from a Word file, so there may be some spacing issues.
Posted by The Furry Gnome at 2:40 PM