Since I've taken you to Orkney, I can't leave without reminding you about the most spectacular concentration of Neolithic Sites in the World.  Four great stone monuments lie within a few hundred yards of each other, and a stone village is a few kilometres away. 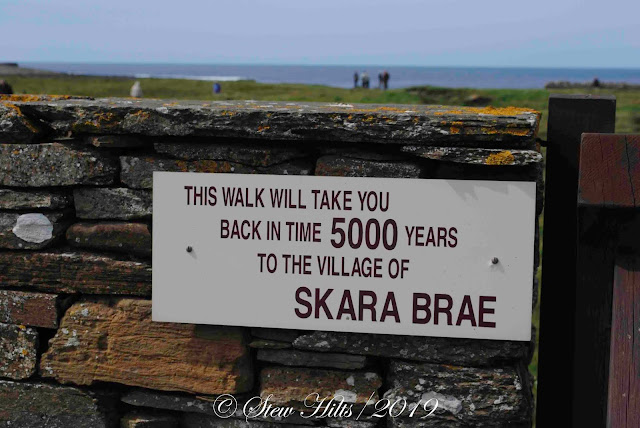 After exploring Kirkwall for a short time we were off to see Skara Brae, a stone-age village built about 3200 B.C.  We walked along the coast of the North Sea a short distance, and there it was.  Buried in sand, it was partly exposed in a violent storm in 1850, and later vandalized, but today it is carefully protected. 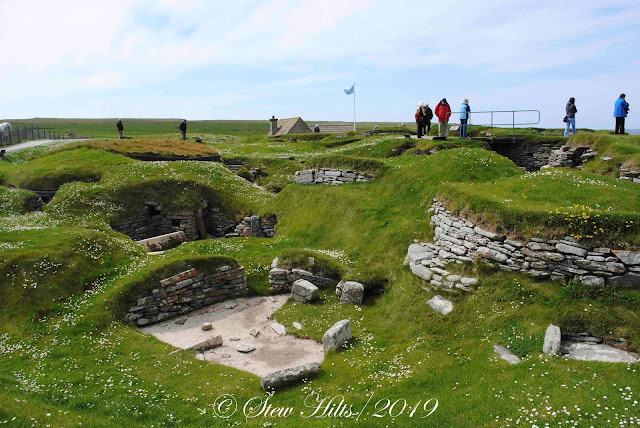 The village consists of 5 houses built into the ground, all made of flat slabs of the local sandstone, even with stone furniture!  Originally these homeS had stone roofs, and all were connected by covered passageways. 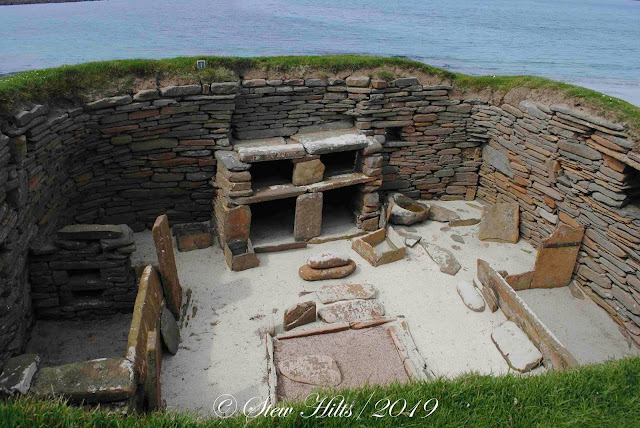 It was truly remarkable to see the detail that went into construction remembering that they only had stone tools to work with.  Metal wasn't discovered until the later Bronze Age. 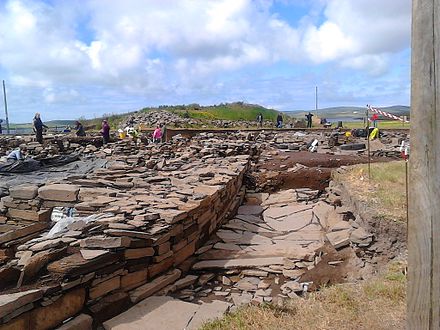 Back on the 'Ness' (peninsula) of Brodgar, an amazing Neolithic 'Temple' has been uncovered.  With enormous four-metre thick walls, this is felt to be the centre of the incredible culture that once existed here.  It contains the only evidence of interior painted walls of this age in Europe.  The site was not open to the public when we visited 8 years ago, so this photo is borrowed from the internet. 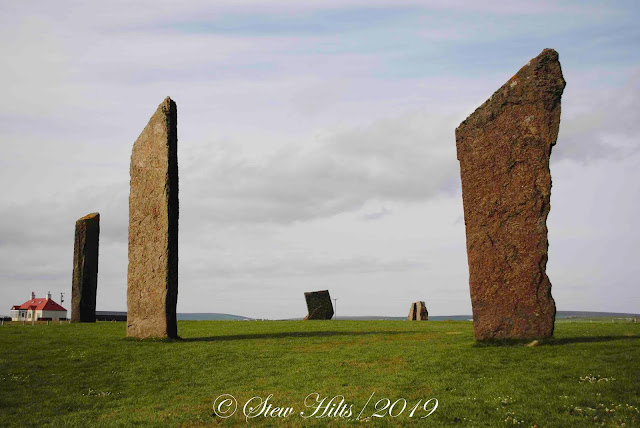 Within sight are the Stones of Stenness, perhaps the oldest stone circle in Britain.  Originally thought to have 12 standing stones, it now only has three.  It is surrounded by a now-buried ditch 2 metres deep and 7 metres wide dug into the solid bedrock. 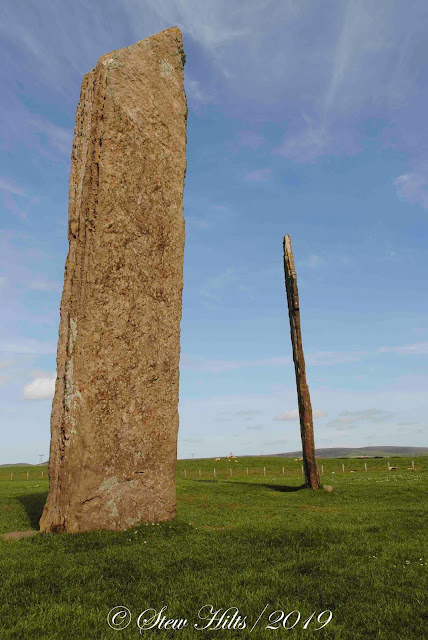 The individual stones are incredibly tall (16 feet) and thin to have been standing here for 5000 years! 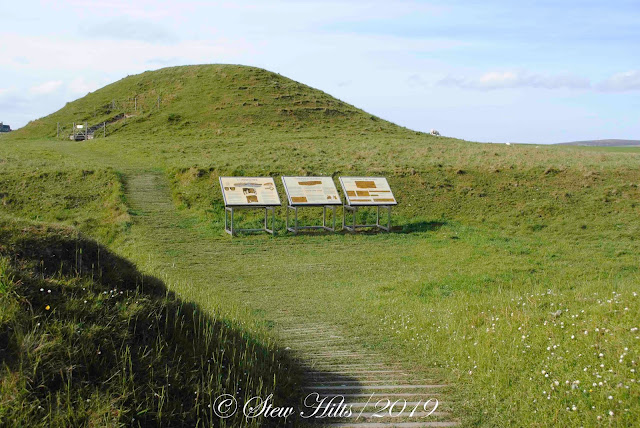 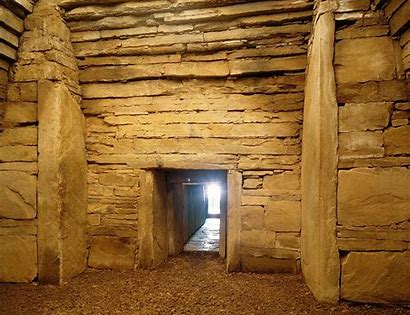 Nearby is Maeshowe, a Neolithic chambered cairn, one of the largest known.  It is built of those great flat slabs of sandstone, like the stone circles, but here fitted together perfectly.  Remarkably it is aligned so that the sun's rays shine directly in through the long tunnel entrance on the winter solstice.  What astronomic knowledge was required to figure that out?

You can enter the tomb, but no photographs allowed, so this photo is borrowed from the internet too. 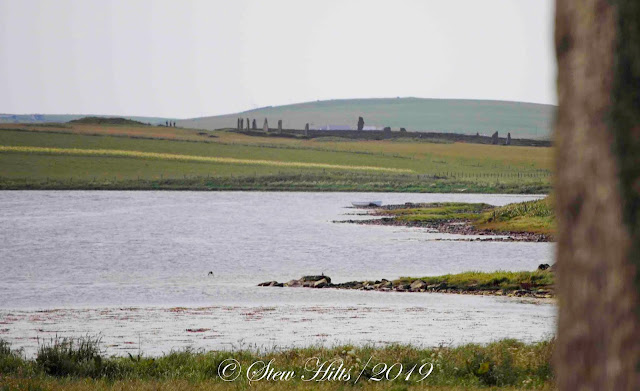 From the Stones of Stenness site you can see across the peninsula to the even more spectacular Ring of Brodgar. 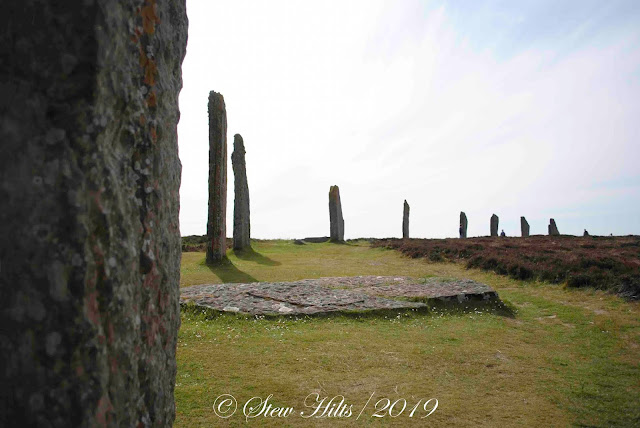 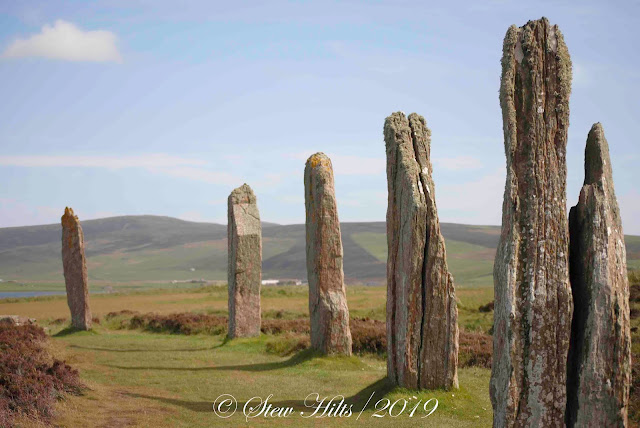 A giant stone circle, this was the last of the great stone monuments to be built here, at 'only' 4000-4500 years old.  It consisted of 60 stones, with 27 still standing inside another ditch up to 3 metres deep and 10 metres wide, again dug into the solid bedrock. 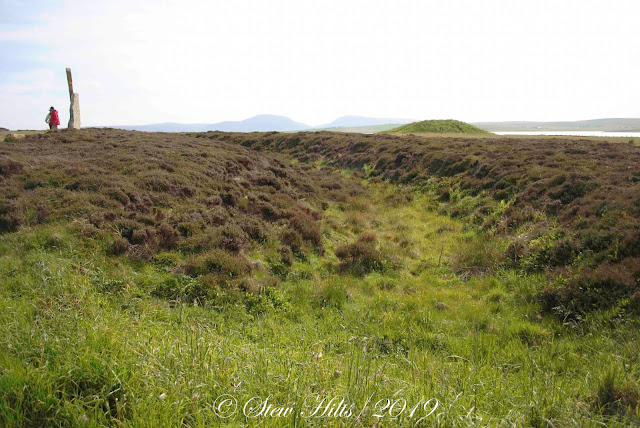 It's incredible to think of the man-hours that went into the building of such monuments.  Archeologists interpret that this required a highly organized society to accomplish this.  Pottery finds here and elsewhere, particularly the 'grooved ware pottery', now suggest that this culture originated here and later spread to the great stone-building area at Newgrange in Ireland, to the Stonehenge area in England, and possibly to Egypt.  We forget that sea-going travel between the North Sea, Scotland and Ireland and the Mediterranean was common in this era.


Now off in a distant northern corner of our densely inhabited world, it is hard to believe that this area of Orkney was once the stone-age cultural centre of the world.  Skara Brae, the stone temple and stone monuments all pre-date Newgrange, Stonehenge and the pyramids of Egypt.  I find it almost impossible to believe, but this monumental stone building culture spread out from Orkney which was its cultural centre.  Sure puts a different perspective on these distant northern isles!
Posted by The Furry Gnome at 11:15 AM