Taking you to Orkney and reviewing our photos of that great trip to Scotland has got me going, so you're going to have to put up with a few more Scotland and England posts before I return to reality.  Before we docked on Orkney our previous stop (we're doing this backwards) was the remote, isolated island of St. Kilda, 40 miles out in the Atlantic west of the Outer Hebrides. 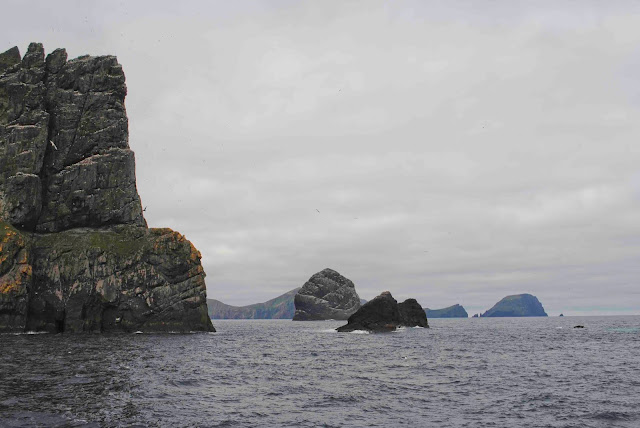 We were remarkably lucky to get calm weather in the north Atlantic on the day we visited.  Passengers on most cruises don't even get to land.  The St. Kilda archipelago includes several rock stacks rising abruptly out of the grey water, and the one inhabited island, Hirta (in the distance). 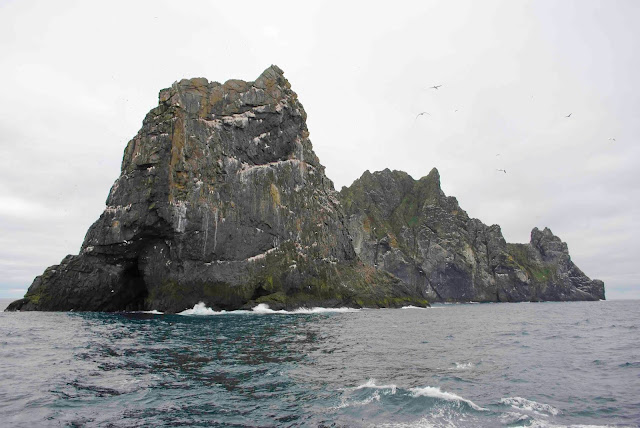 The rock stacks like this one are amazing, rising straight up out of the water, several with no safe landings (except for the birds) at all. 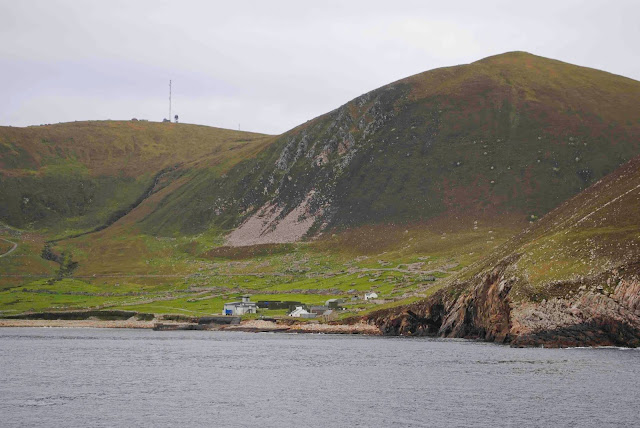 Sailing into Village Bay, you can see the medieval stone houses in a line across the slope, as well as the British missile tracking range towers on the horizon.  The entire island is grazed by sheep. 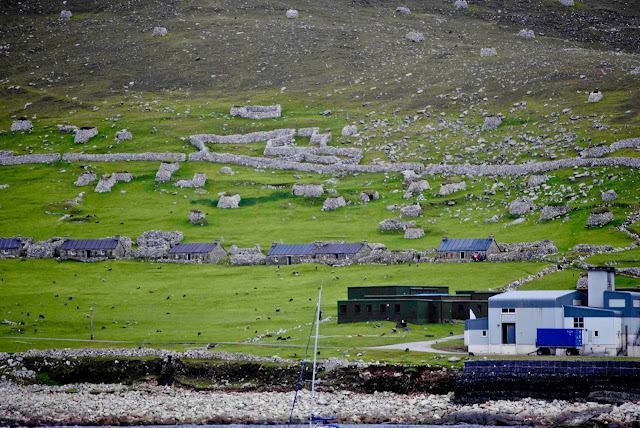 A closer look shows the 6 houses rebuilt by National Trust of Scotland volunteers since 1955, as well as some more modern Ministry of Defence buildings.  Transferring by zodiac (we were only the second of 5 ships from which passengers could safely disembark that year), we headed to explore the island. 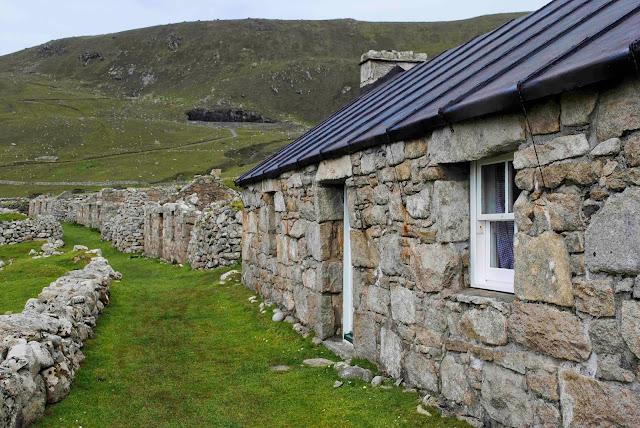 The island population was known for its remarkable daily morning meetings of the men, deciding on the tasks for the day.  In recent centuries the total population has never reached 100, so it was only a few families involved.  Historians have made much of this democratic 'parliament' where the men gathered in this 'street' in this 'free' , but very isolated, society.  Islanders have been described as healthier and living in better conditions than most in the larger Outer Hebrides during the mid-1800's, the era of the notorious clearances.  There has never been a serious crime in recorded history.

The island's population dropped further when 36 islanders emigrated to Australia, upset over the religious divisions in Scotland in those years between the Church of Scotland and the Free Church of Scotland, both strongly Presbyterian.  Influenced by early tourism and the military during WWI many young men left for a better life, and by 1928 only 37 people remained.  In 1930 they made a collective decision to leave, encouraged by the island's nurse.  They were resettled in Morvern.  The last living islander died in 2016, having been evacuated when she was only 8. 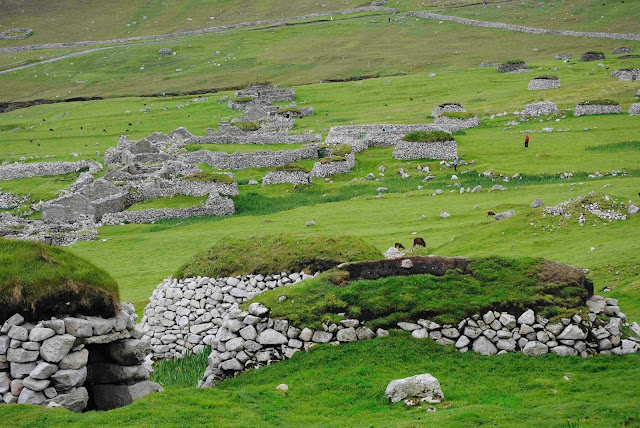 There are numerous stone storage buildings or 'cleits', as well as garden enclosures (to keep the sheep out).  All built of drywall construction; they were roofed with turf.  The houses were traditional Scottish 'blackhouses'. 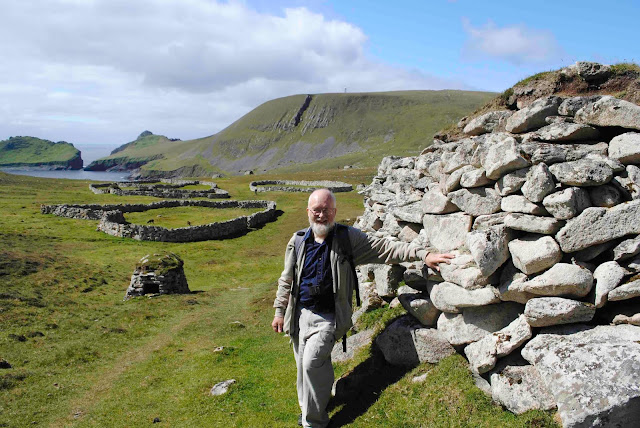 We made a considerable uphill hike out of it - yours truly in the years before the wheelchair.  The vertical scar on the cliff in the background has proven to be a Neolithic age quarry, showing St. Kilda to have been occupied for several thousand years. 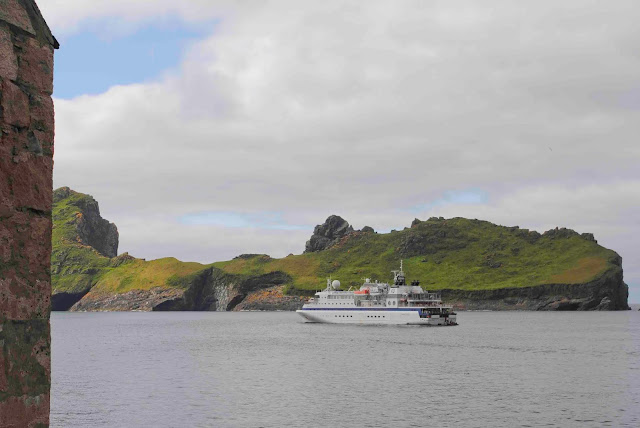 Looking down on our adventure's cruise ship.  Islanders had a tougher time of it, usually taking several days for sailing or rowing to the mainland, after perhaps months of waiting for good weather. 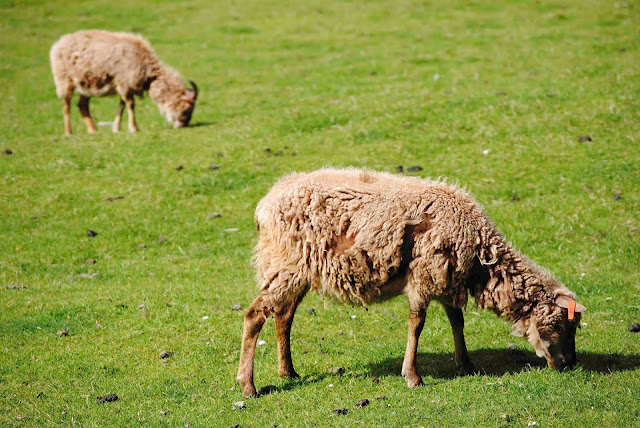 There are 3 unique species on St. Kilda, having evolved through centuries of isolation.  These is the Soay sheep which are left to graze and survive with no shepherds. 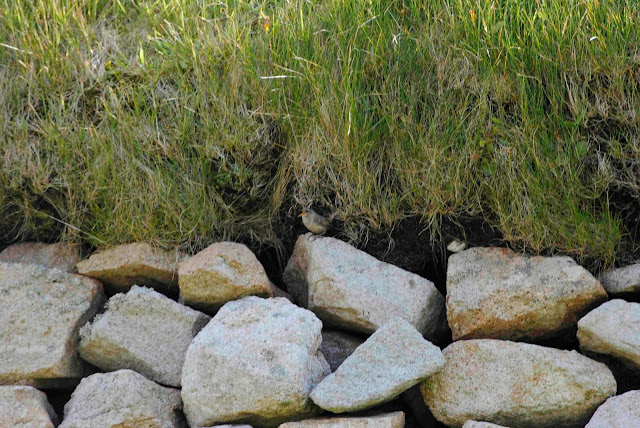 And this is the tiny St. Kilda Wren, right in the middle of the picture.  There is also a St. Kilda Field Mouse. 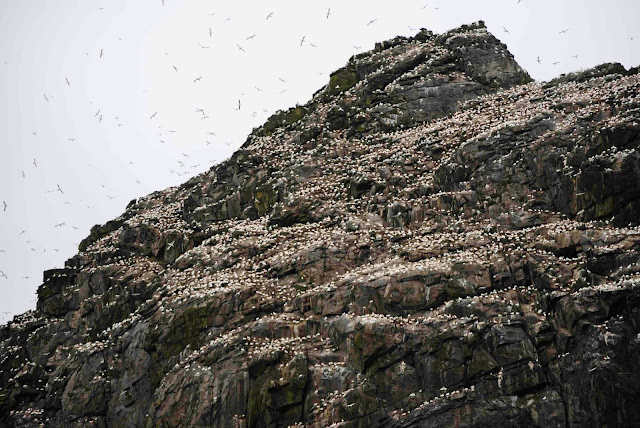 But by far the dominant wildlife are the birds, especially one of the world's largest colonies of Gannets, but also Puffin, petrels and fulmars.  These birds and their eggs were the main source of food for the islanders besides the few potatoes they could grow.  Men and boys scaled down the cliffs on ropes to gather the eggs and the young birds.  A dangerous life and a monotonous diet! 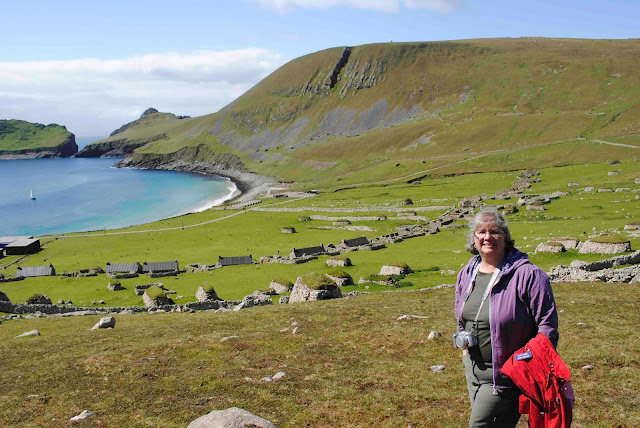 This was the best holiday we have ever had of our many trips together, certainly the most exciting!  And St Kilda is one of the most unique places we have ever visited.  And in case you wonder who St. Kilda was, history is sadly silent on that question.