I know you're all anxious to get back to the seasons here in southern Ontario, so I'm going to cram a few extra photos of our great adventure into one post.  We rode the train up from London for a change, and had a couple of days in Glasgow before joining our tour group. 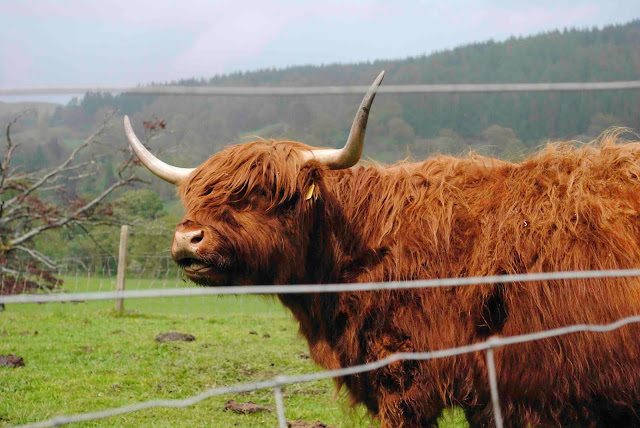 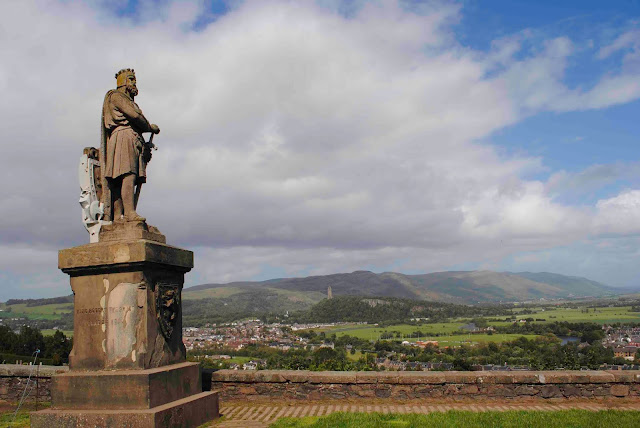 Nothing symbolizes the highlands of Scotland like the 'heiland coo', except maybe Scotch whisky.  We stopped at Stirling Castle to admire the statue of the famous Robert the Bruce and in the centre distance you can see the famous Wallace Monument.  These two great Scottish heroes won Scotland's independence from England in the early 1200's.  Did you know that eventually the King of Scotland, James VI, inherited the throne of England in 1603 when Elizabeth I had no children?  England never did conquer Scotland, which has a lot to do with the recent Scottish Independence movement. 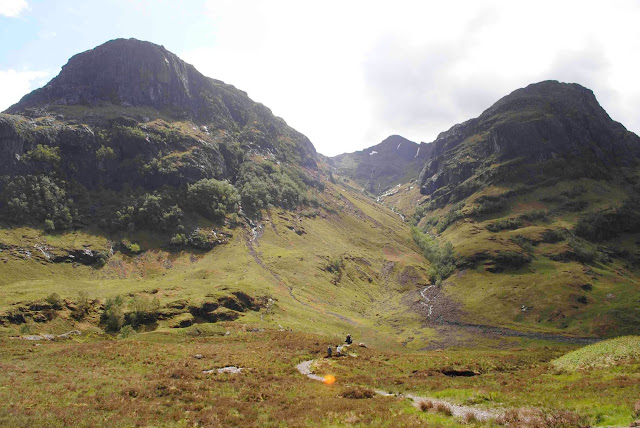 Our first stop on out adventure tour was the valley of Glen Coe, where the infamous Glencoe Massacre took place in 1692.  A lot of Campbells and MacDonalds haven't spoken since. 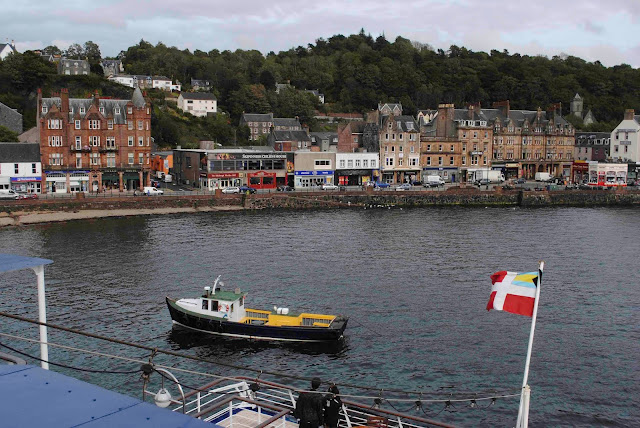 After that we reached the harbour town of Oban on the west coast and joined our Adventure Canada cruise, and it was quite the adventure! 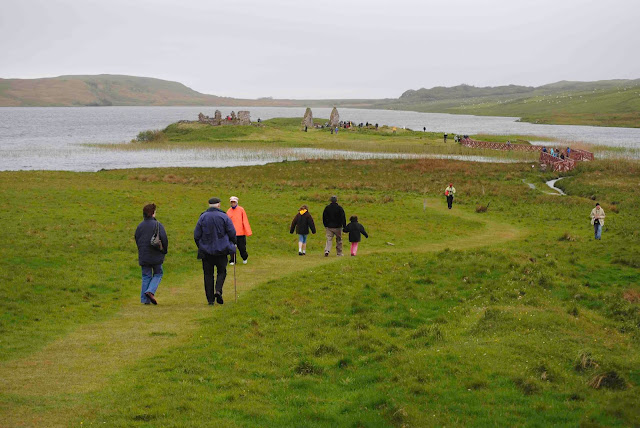 We sailed south first, to the Isle of Islay ('eye-la'), and hiked inland to visit Finlaggan.  This ancient ruined castle was the 'capital' of the Kingdom of the Isles from the 1200's to 1493.  An incredible story in its own right.  This is the origin of Clan Donald.  Today there's a new visitor centre. 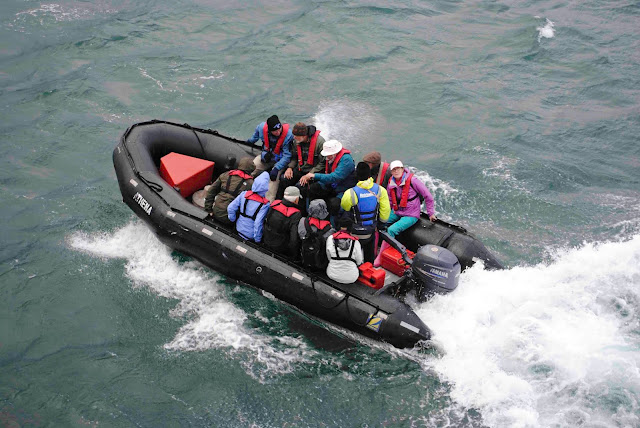 That evening a group headed off to visit a distillery, but we were too exhausted and stayed on board.  These zodiacs were our means of disembarking except for the rare spot like Kirkwall, where the ship could actually dock.  This was definitely not a cruise for the disabled!  The ship had only about 100 passengers plus about 10 experts in various fields (people like the writers Margaret Attwood and Ken McGoogan) who made this a real educational experience. 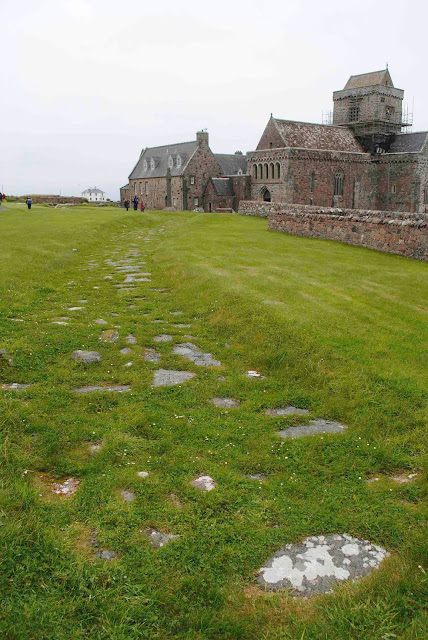 The famous Isle of Iona was next, another story in its own right, and for many the most famous place in Scotland.  Here Columba, an Irish monk, arrived in 563 to begin spreading the news of Christianity.  The island, though wiped out by the Vikings in 796, became and still is a place of pilgrimage.  For over 500 years Scottish kings including Macbeth in 1057, were buried here.  This is the original approach to the church, the 'Path of the Dead'. 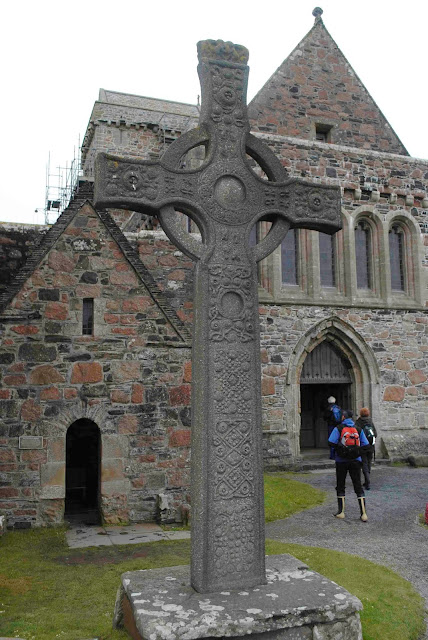 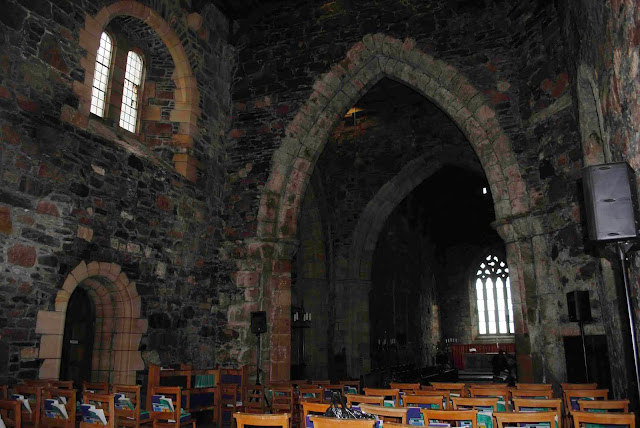 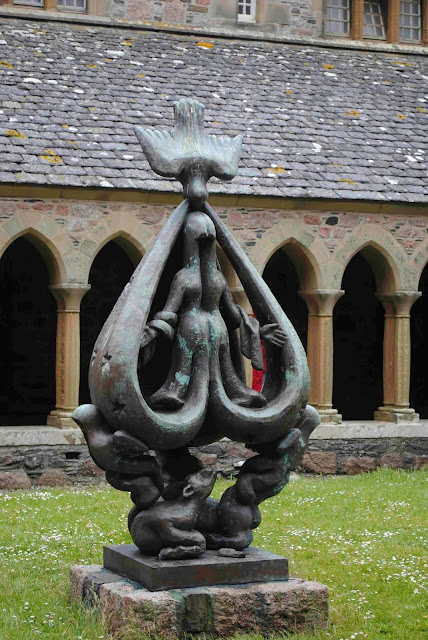 It has been repaired of course, but this is the best preserved medieval building in the Western Isles of Scotland.  It contains four of the best preserved carved stone crosses in Scotland. There is an active Iona Community which maintains it and runs programs here.  You can go and stay for a week if you like.  Small compared to other great medieval cathedrals, it never-the-less has more spiritual meaning than any other European church to us.  The modern sculpture in the cloister references St. Columba, the 'Dove of the Church'. 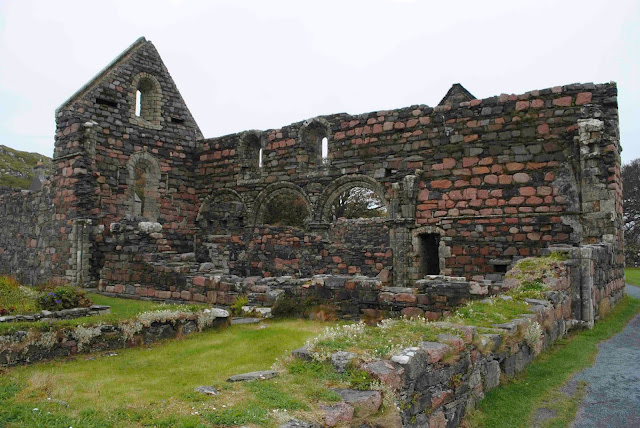 There was also an Augstinian nunnery established during the 1200's.  You can walk through it on your way to the abbey. 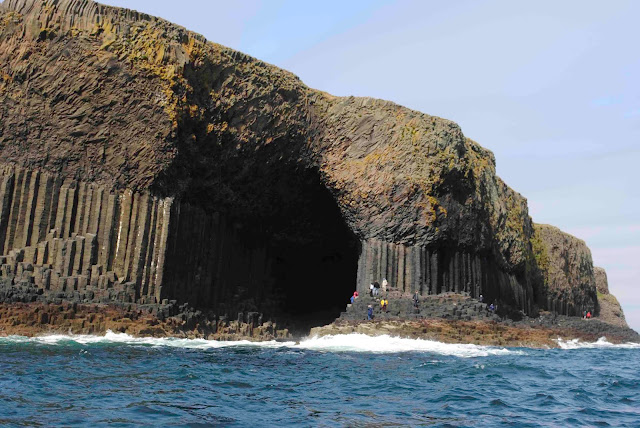 After Iona we stopped at the famous Isle of Staffa to see Fingal's Cave, an opening in the huge volcanic columns that are a continuation of the distant Giant's Causeway in Ireland. 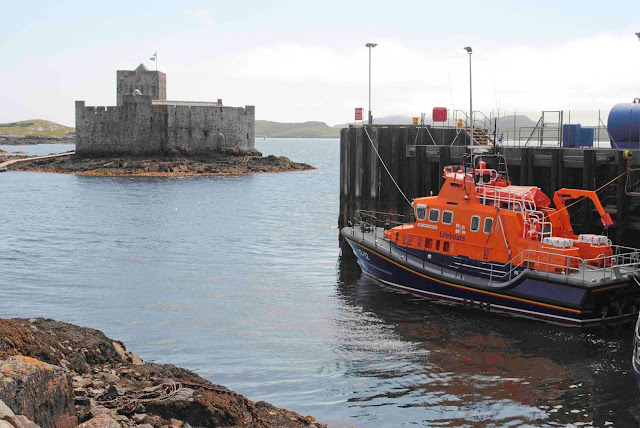 And then we got to Barra, the southernmost inhabited island in the Outer Hebrides.   Previously the honme of the MacNeils, the island was sold to Colonel Gordon in 1838, and he promptly 'cleared' the island in favour of sheep grazing.  Just one of the horrific stores of the 'Clearances', though we owe them many of the hard-working Scottish pioneers who settled Canada.  The rescue ship is one of those 'self-righting' boats, at least in theory, and that's the vacant Kisimul Castle in the harbour. 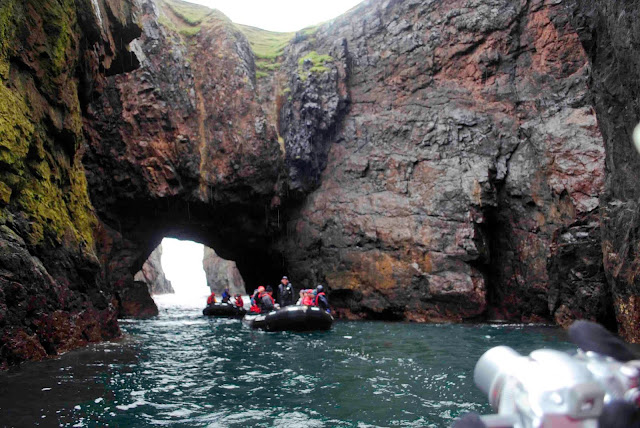 Then we were off to St. Kilda and Orkney, which I've already told you about, before arriving at Foula, one of the outer islands of Shetland.  Here we jumped into the zodiacs (literally), and explored some sea caves.  It was an exciting, bouncy ride.  When we got back on ship, Mrs. F.G. said 'Oh let's go to Antarctica next!'

The landing platform on the ship was literally going up and down six feet - 3 feet below water and then 3 feet above.  You had to time your jump just right! 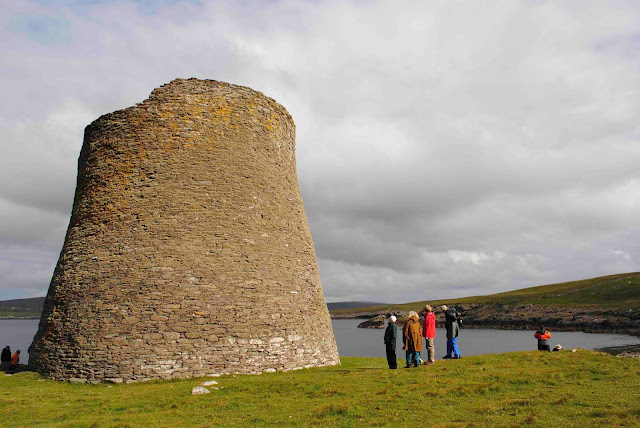 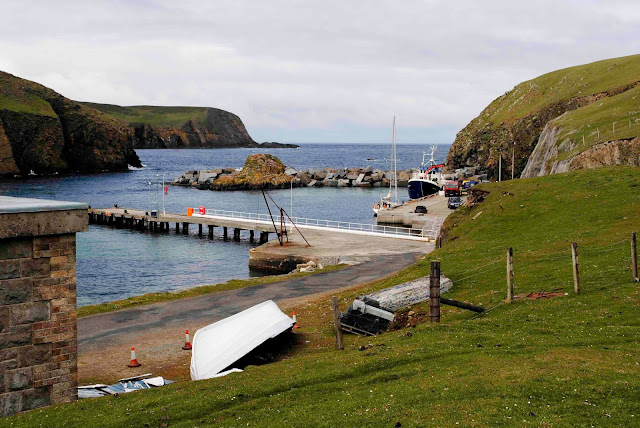 We stopped at the 2000 year-old Broch of Mousa, the tallest broch still standing in Scotland and one of the best preserved ancient buildings in Europe.  An amazing round tower all built of dry stone construction, with hidden stairways inside the walls.  Then it was on to the well-known Fair Isle, halfway between Shetland and Orkney.  There was a harbour, but not big enough for our ship! 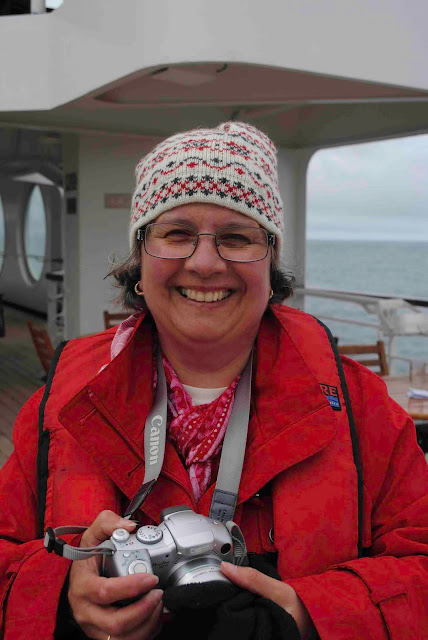 And what is Fair Isle famous for?  Why its knitting of course (during those long dark winter days), especially its sweaters which we couldn't afford.  But Mrs. F.G. sprung for a toque in a traditional Fair Isle pattern.  Fair Isle is about the latitude of Baffin Island. 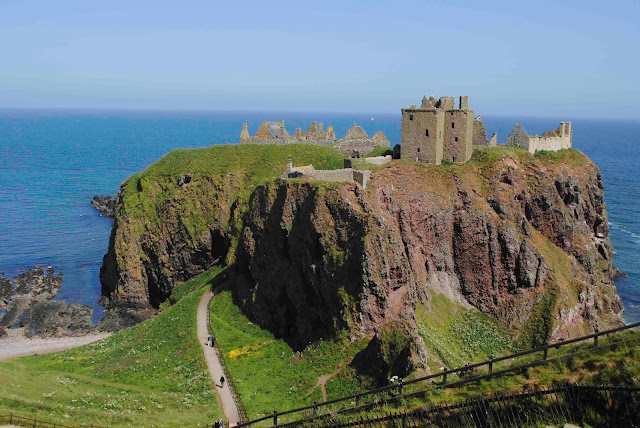 Finally we were back on mainland Scotland, and stopped at Dunnotar Castle, built on this rocky stack southwest of Aberdeen.  It was the seat of the Keiths for several centuries. 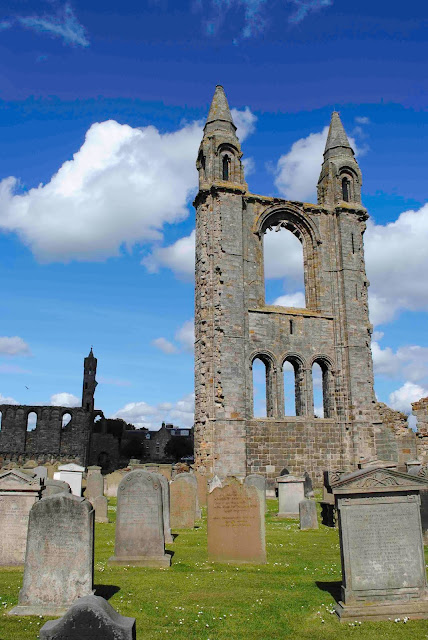 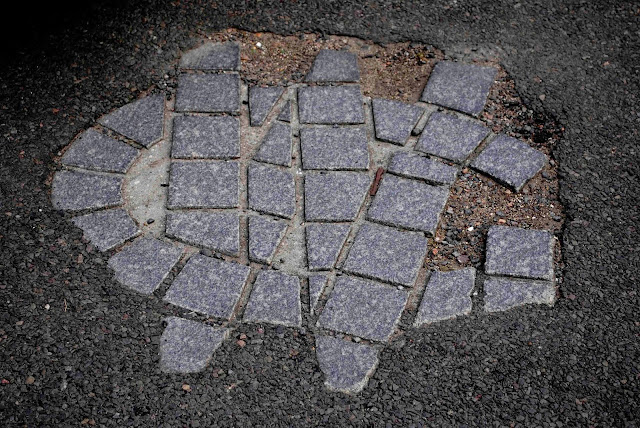 The last stop was St. Andrews to see the ruined cathedral and castle.  I'll end with the initials of George Wishart etched into the pavement outside the castle where he was burned at the stake in 1546.  An early Protestant Reformer, in the days of Mary Queen of Scots, he was a huge influence on the Scottish Reformation. 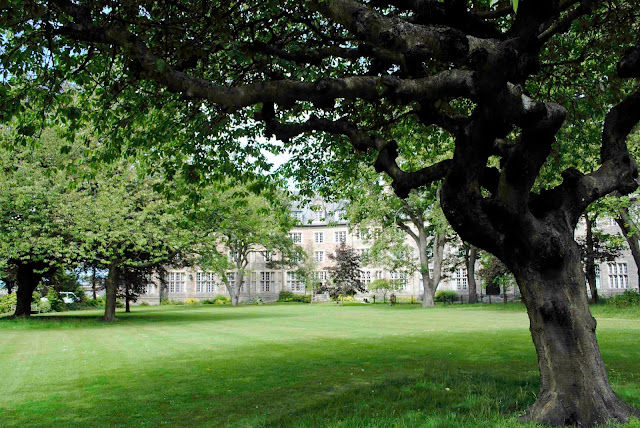 And here's a quizz.
The most popular tourist site in St. Andrews we were told,
what do you think this is?