After our picnic lunch in Wiarton we headed over to the west shore of the peninsula at Oliphant, and then north through Red Bay to Petrel Point just south of Howdenvale.  Petrel Point is an old nature reserve established in 1962 I think, and owned by Ontario Nature.  I had heard they had built a wheelchair accessible boardwalk here and was anxious to try it out. 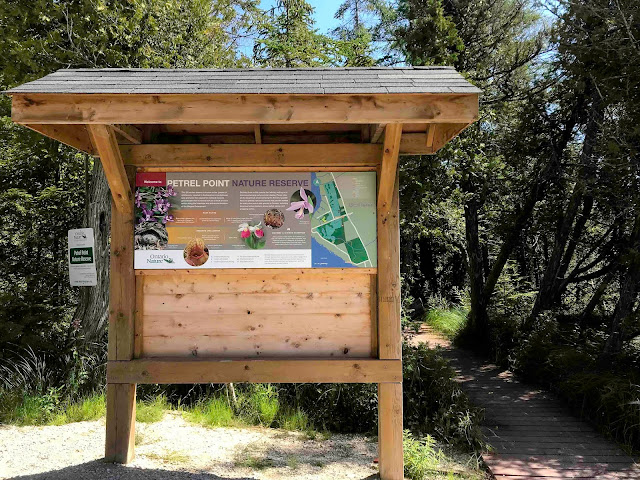 There's a large new welcoming sign which explains the uniqueness of this wetland, a 'fen'.  Common bordering Hudson Bay, these wetlands are very rare in southern Ontario, but there are small pockets of them along the Lake Huron shore of the Bruce Peninsula.  You can see the new boardwalk on the right. 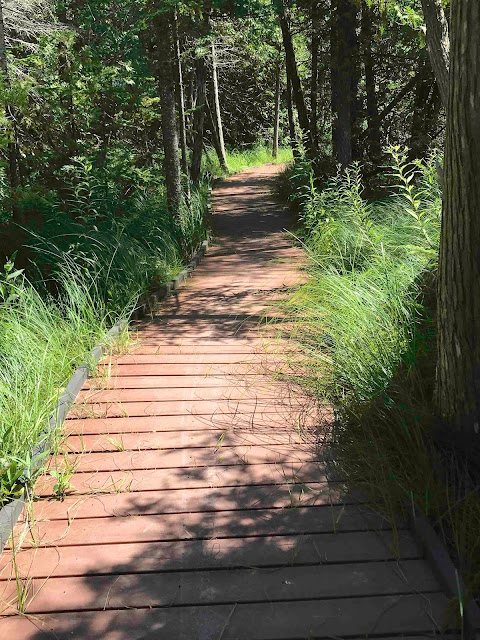 The new boardwalk, beckoning us into the cedar forest, looks great.  It replaces an old narrow boardwalk that has been here for decades.  There are very few wheelchair accessible trails through natural environments of any kind anywhere that I have found, so I was thrilled to see this one.  It was well built, with bumper edges, and plenty wide enough for safe operation of a wheelchair. 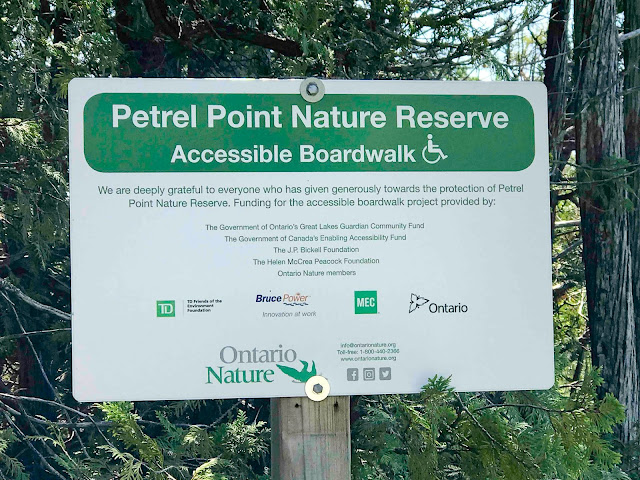 A sign announced it's construction and gave credit to several funders. 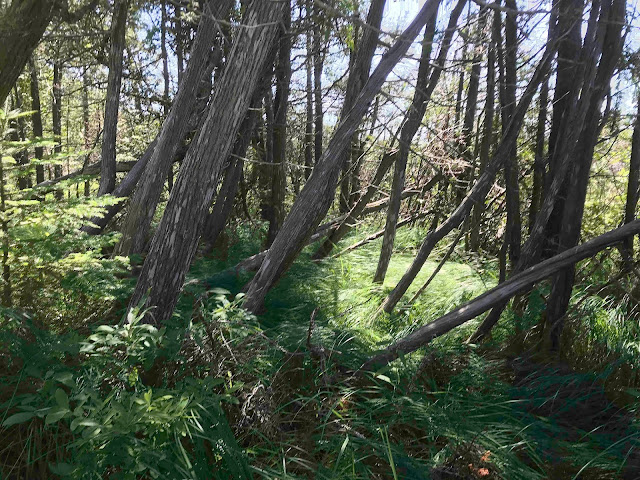 The dark cedar forest with it's tilting trees is fascinating in it's own right, but the orchids that grow here are finished for the year. 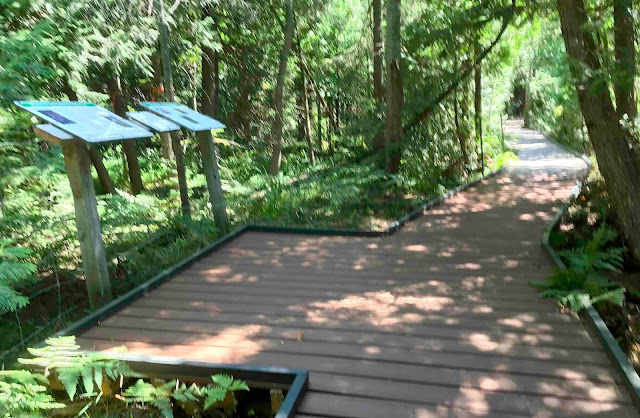 The boardwalk widens out in several places, giving spots to rest or turn around.   And in this case provide some information boards. 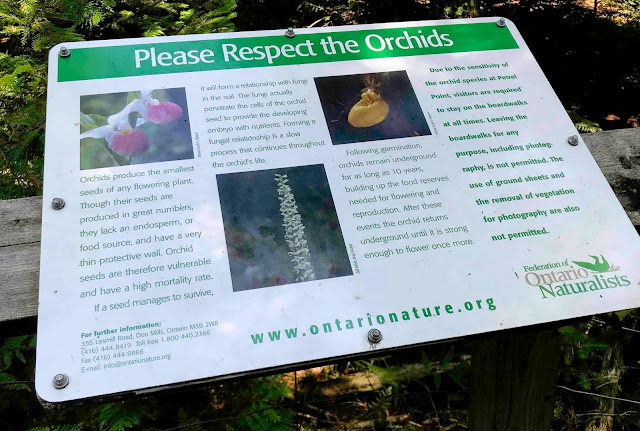 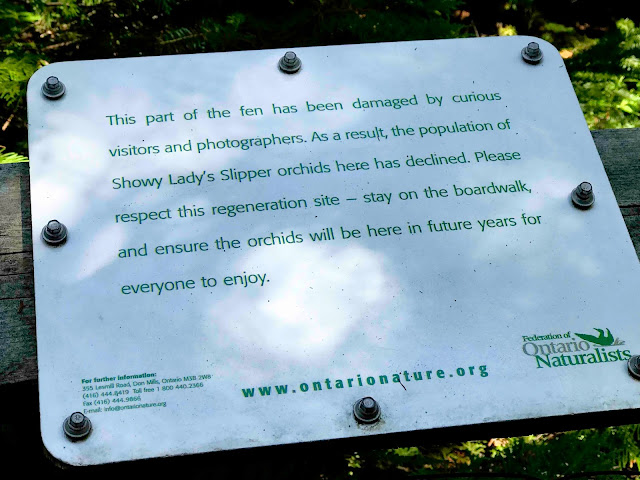 Two display boards explain the uniqueness and fragility of the orchids that grow in this unusual habitat.  Photographers have been wont to leave the boardwalk in the past just to get that ideal picture.  On occasion entire busloads from the Toronto Guild of Colour Photography would show up and some would even spread out groundsheets so they didn't get their knees dirty or wet in the process of getting their prize-winning picture, trampling all the surrounding vegetation in the process.  They added the second sign to emphasize this, along with some discreet fencing most people wouldn't even notice. 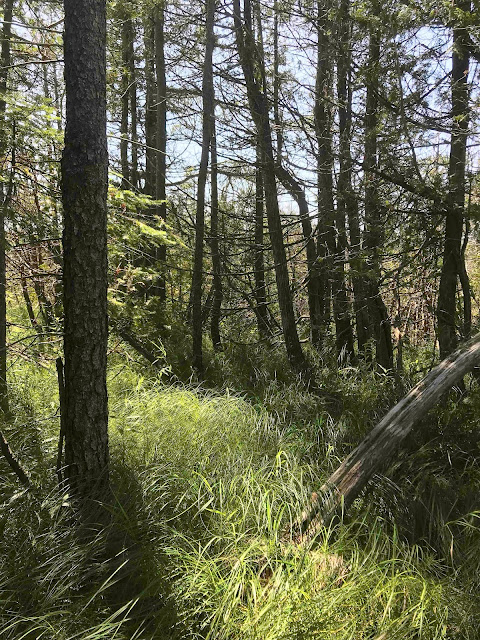 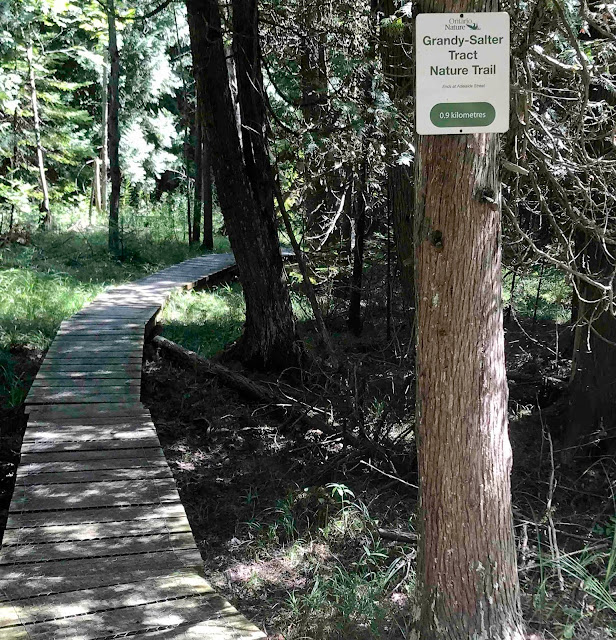 They have purchased several additional land parcels since the years when I was involved; this trail leads to one of those. 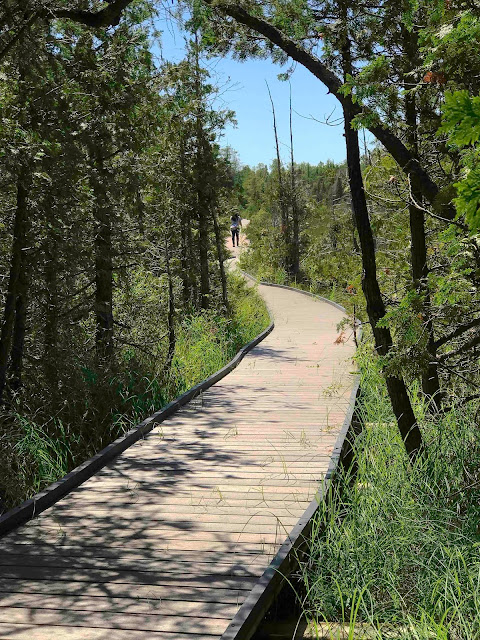 This part of the boardwalk forms a loop, which was appreciated.  This is one of the longer stretches leading out into the open fen. 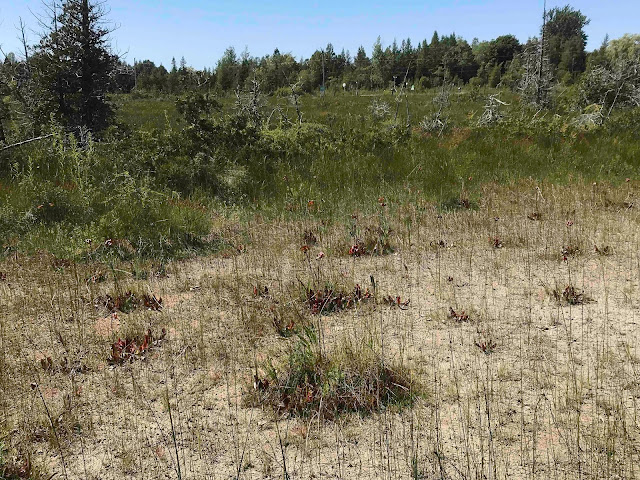 And this is the fen, a marshy looking meadow interrupted with small cedars and Cinquefoil shrubs. on a base of wet sand.  Except these aren't marsh plants, they're sedges, rushes, and in this picture carnivorous Pitcher Plants.  There would be a few inches of water here in the spring, but in mid-August of a dry summer, it's just sand. 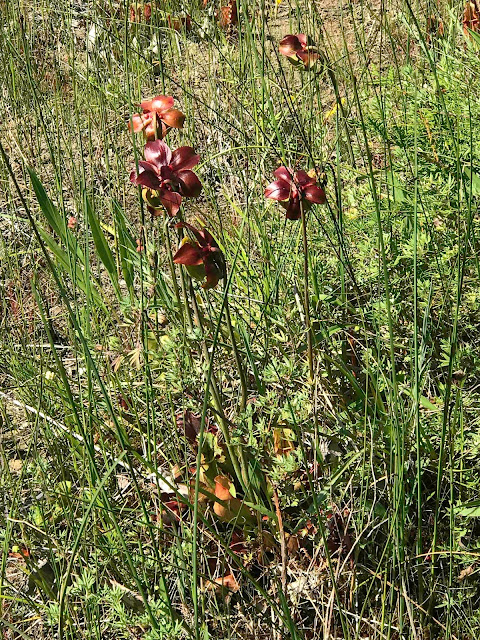 You're looking at the back of the Pitcher Plant flowers here, one of the three carnivorous plants that this nature reserve is known for.  The flowers nod over and hang down, so it's nearly impossible to get a picture from a wheelchair. 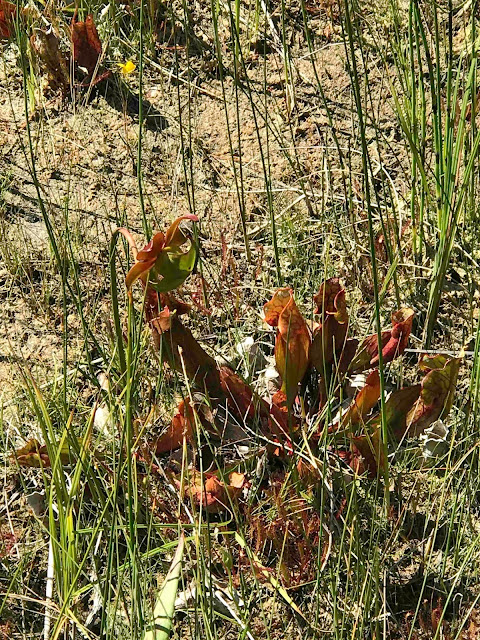 And these are the 'pitchers', enclosed leaves with downward pointing hairs that trap insects which get dissolved, providing the plant with it's nutrients.  You may be able to distinguish a side view of a flower on it's curved stem at the upper left of the cluster of leaves. 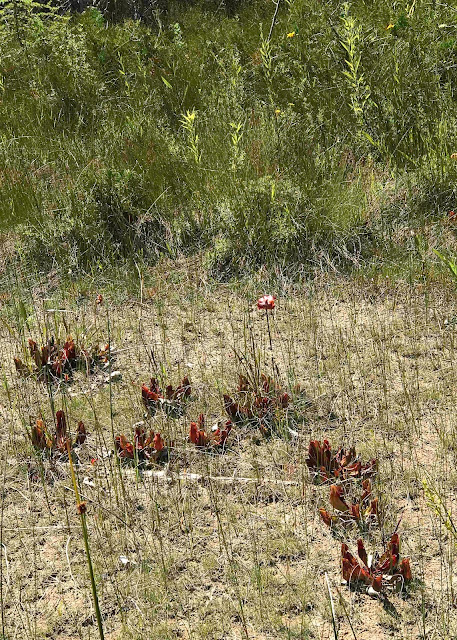 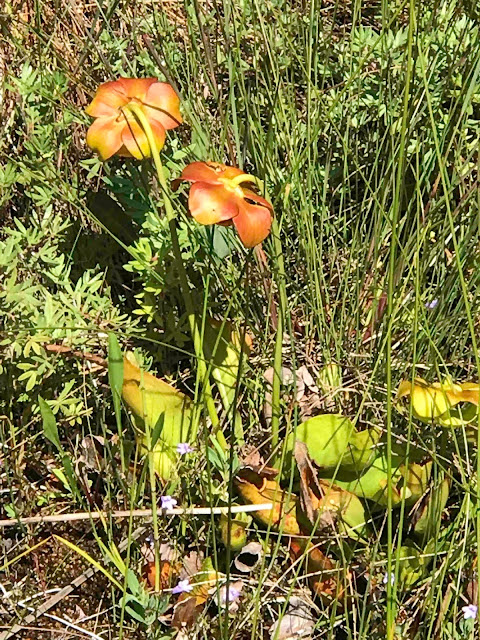 The colours range from dark purple to bright green or almost yellow. 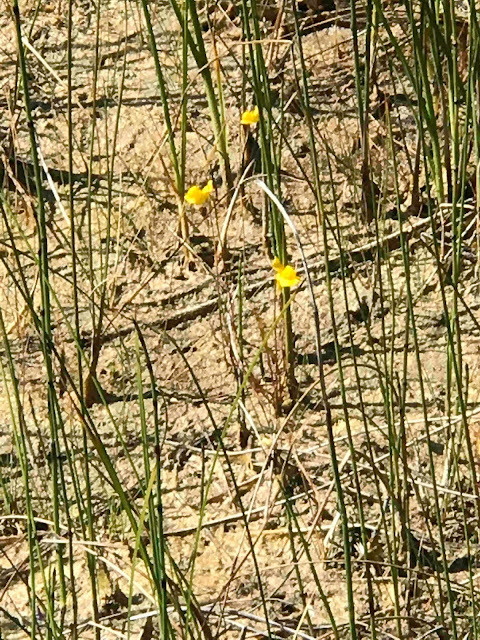 A second carnivorous plant found in this unique habitat is this tiny yellow Bladderwort, most of the year with it's surface roots under water ready to trap and digest any tiny insects drifting by. 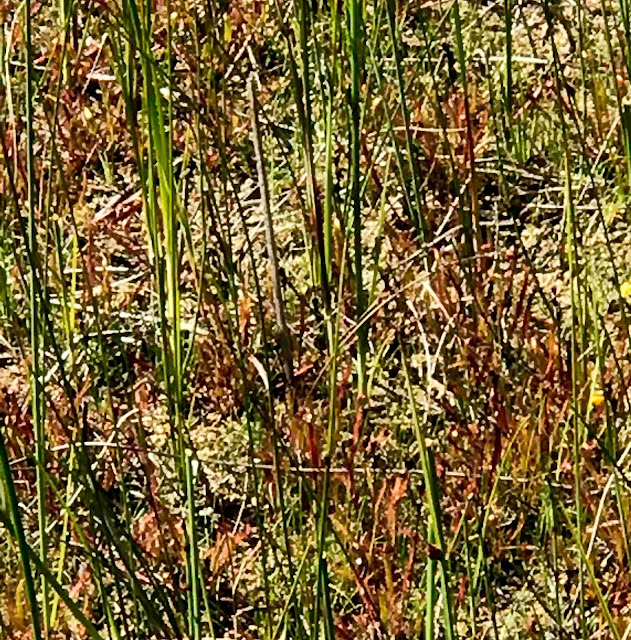 And the third of the carnivorous plants is the Slender-leaved Sundew.   It`s very hard to make out in this picture and I couldn`t get down on my belly to take a close-up, but it`s the reddish short leaves below the taller green stems of the rushes.  Tiny hairs on the leaves wrap themselves around any passing insects and then the plant devours them. 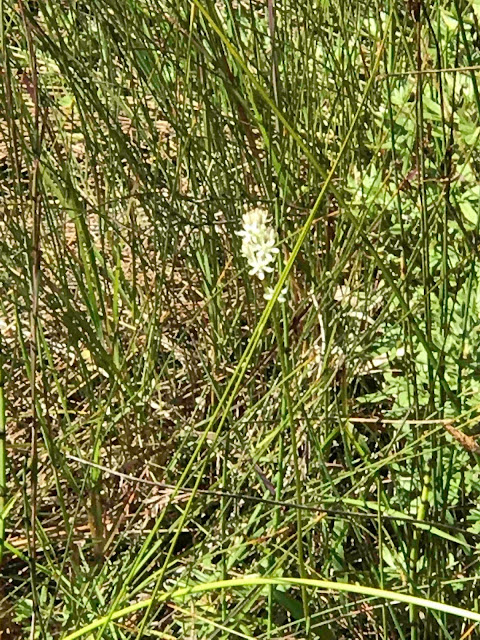 There are lots of other interesting plants in the fen.  This is just one, the False Asphodel.  We want to go back in fall and spring to see some of the others and get some more pictures. 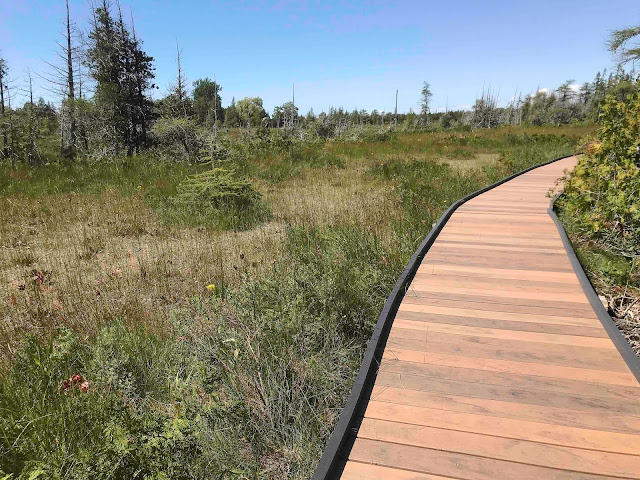 At any rate, it`s a well done accessible boardwalk, and we really enjoyed it.  We`ll definitely be back! 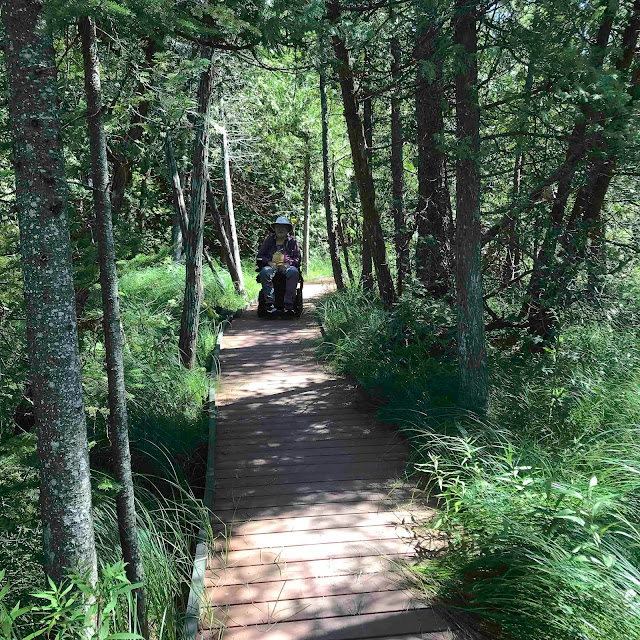 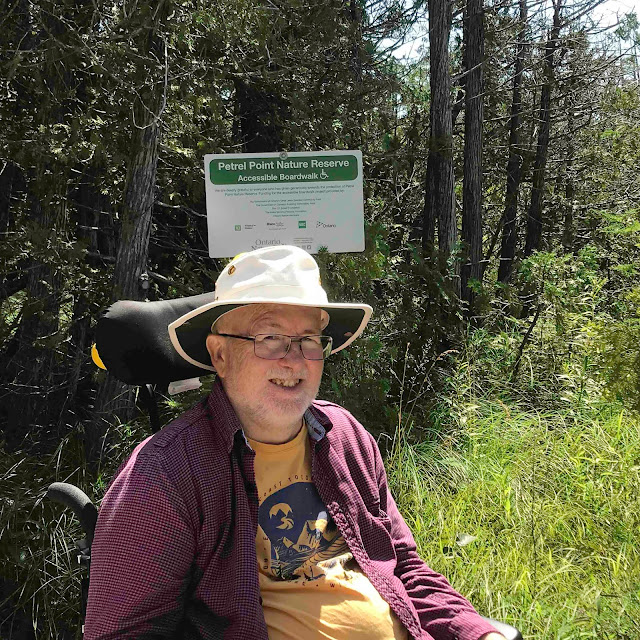 Sorry it took me three days to get to this post; life is just too busy these days!