Heading down the Rhine, our next stop was Strasbourg, the capital of the EU.  The city has moved between French and German control over the centuries; today it's a French city and a cultural highlight of Europe.  And the Strasbourg Cathedral is the highlight of the city! 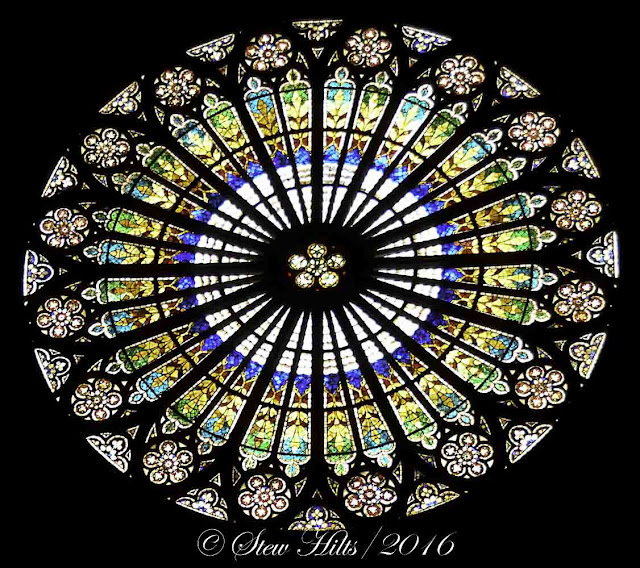 One of the most beautiful rose windows we've seen! 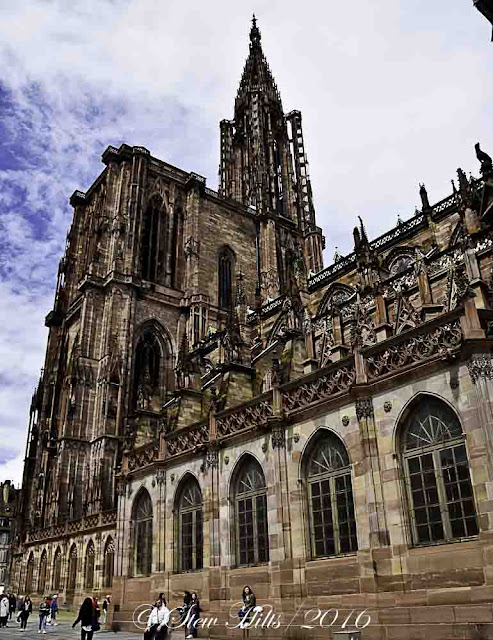 The cathedral is surrounded by downtown buildings, so without a wide-angle lens it's impossible to get a picture of the full church.  It's also one of the largest cathedrals, and for 225 years starting in 1647 it was actually the tallest building in the world! 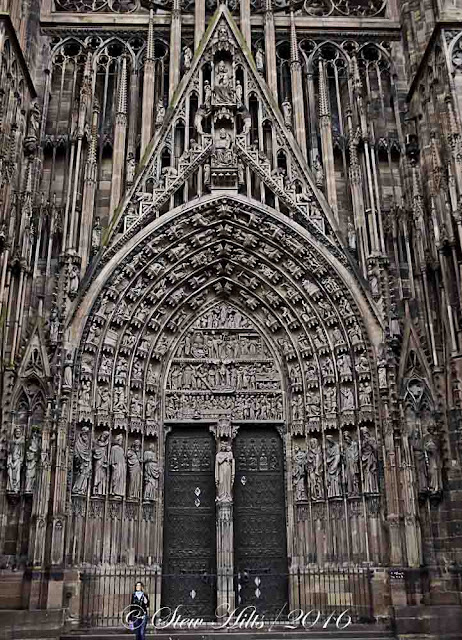 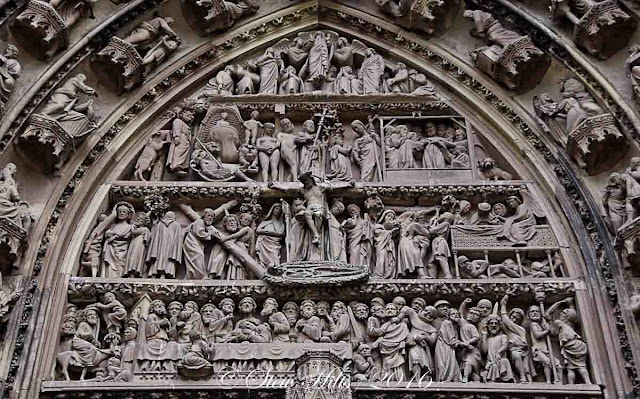 The church was built over nearly 3 centuries starting in 1176 and is one of the best examples of high Gothic architecture in the world, typified by the incredibly detailed stone carving.  The main doors at the front feature a lot of that incredible stonework. 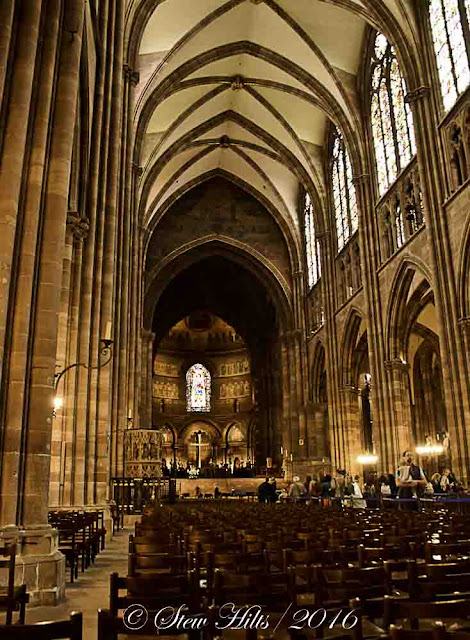 Inside it's simply enormous, with 8 huge stone pillars holding up the high vaulted roof, beneath which are the beautiful stained glass windows. 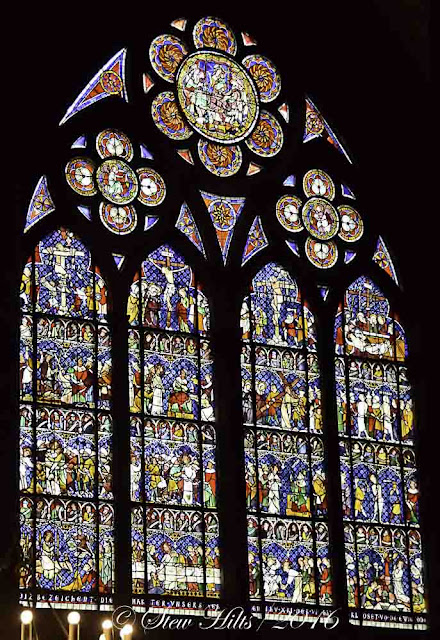 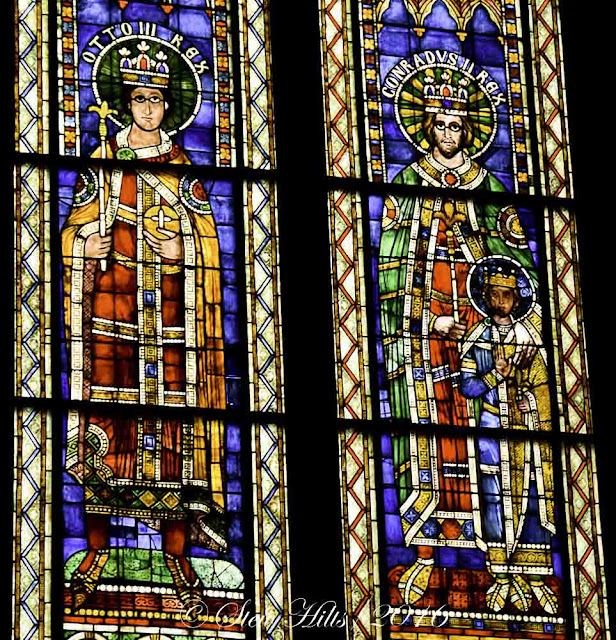 The stained glass windows, mostly dating from the 1300's, were removed during the war and stored in a German salt mine.  The U.S. military returned them after the war - did you know the U.S. military has a Monuments, Fine Arts and Archives Division? 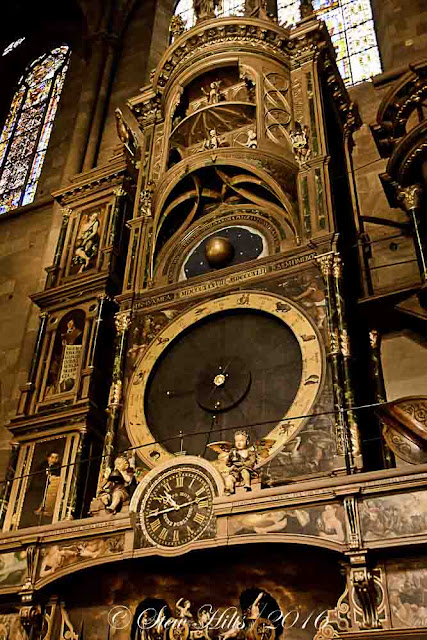 The most unusual feature of the church is the incredible Strasbourg Astronomical Clock.  You can't get far enough away to get a full picture, but this clock is one of the largest and most complex astronomical clocks in the world, telling the solar time, date, phases of the moon and signs of the zodiac, plus the positions of the planets and more as well as the time.  Behind the surface is an incredibly complex mechanism that moves numerous figures on the face of the clock.  Truly one of a kind! 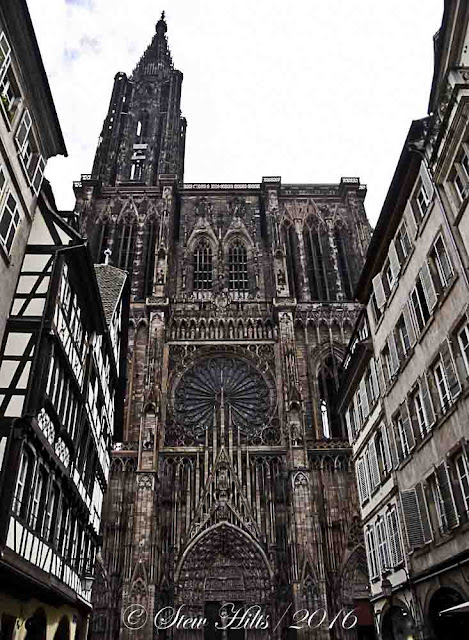 There is only one spire at the top of the church, built high enough to make sure it eclipsed the cathedral in Basel.  It did so in spades!  The rest of that upper roof is an observation deck!  Guess where I went?  And note how crowded in it is with other more recent buildings. 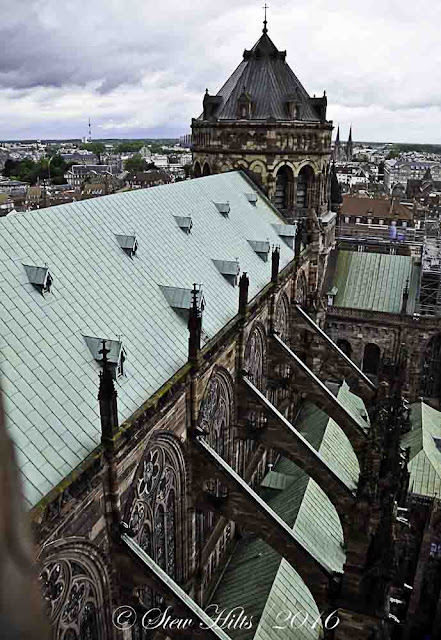 I headed up a narrow spiral stone staircase, and was soon looking down on the six big flying buttresses and the weathered copper roof. 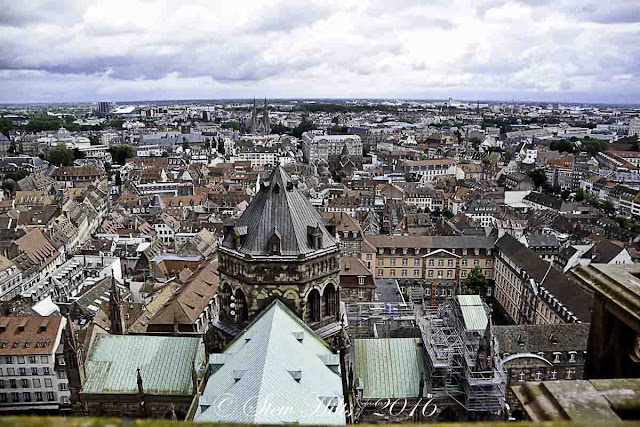 After a lot of climbing (and stopping for breath), I emerged to look over the edge of the roof with a lot of other tourists.  This is a beautiful old city that restricts skyscrapers, so the skyline is almost all old buildings.  Though that's the headquarters of the EU in the far back left upper corner. 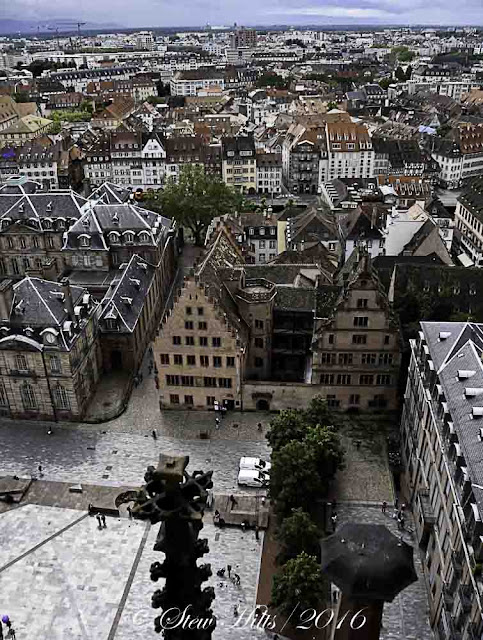 Looking down on the square below I could tell that I was a few stories up by now!  Really enjoyed that climb. 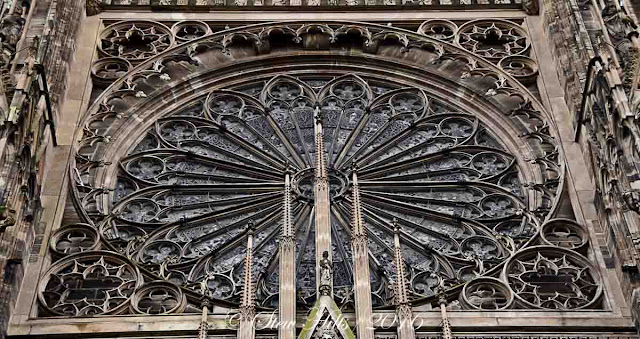 The exterior stonework of that beautiful rose window.  Strasbourg Cathedral was something really special to see!