On day three of our river cruise we visited Heidelberg and the Heidelberg Castle, home of the 'Winter Queen' in the early 1600's.  In case you haven't heard of her, Elizabeth Stuart is the key to the entire past four centuries of succession in the British Monarchy.  The present Queen Elizabeth II is her 10th generation descendant! 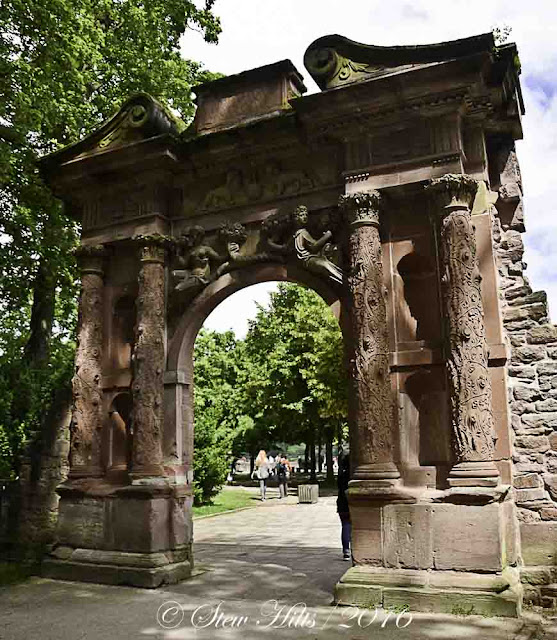 This gate was built for Elizabeth by her new husband, Frederik V, of the Palatine, a German state, after their marriage in 1613.  This Elizabeth was the oldest daughter of James VI and I, the Scottish king who inherited the throne of England as well in 1603, after Elizabeth I of England died childless.  I guess Elizabeth was a popular name at the time. 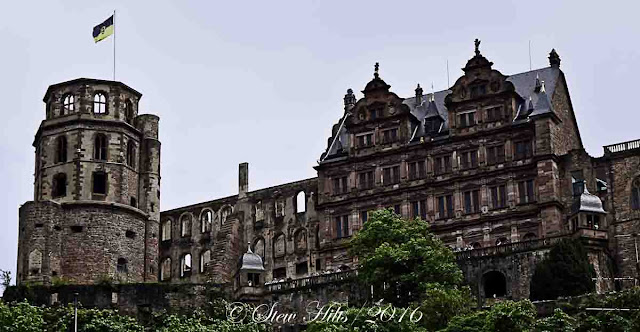 Today the palace is mostly a ruin, though it has been partly restored as a very popular tourist attraction.  It was a few years after their marriage that Frederik was also made King of Bohemia.  Unfortunately he only lasted a few months before losing in battle.  They fled in exile and he and his wife have been known as the 'Winter King' and 'Winter Queen' ever since, as they only reigned for one winter. 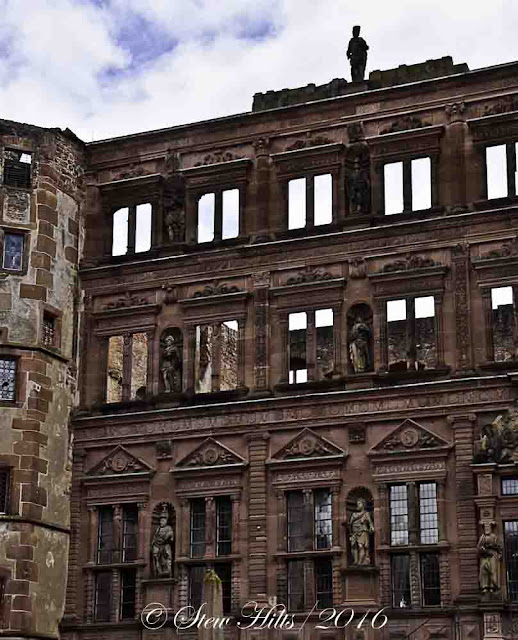 There were obviously a lot of statues originally; many still exist in their wall niches.  Frederik and Elizabeth had to finish the rest of their lives living in exile.  Ultimately Elizabeth had 13 children, so maybe exile was good for them! 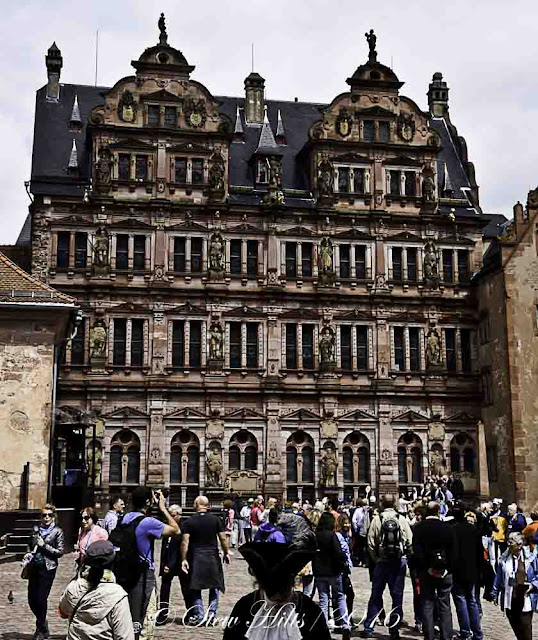 This part has been restored, and gives some impression of how the palace would have looked 400 years ago.  And of how popular it is with tourists! 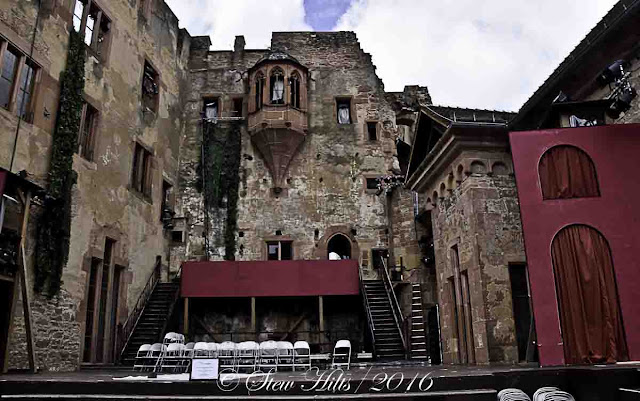 Part of the ruins have been transformed into an outdoor stage for theatre performances. 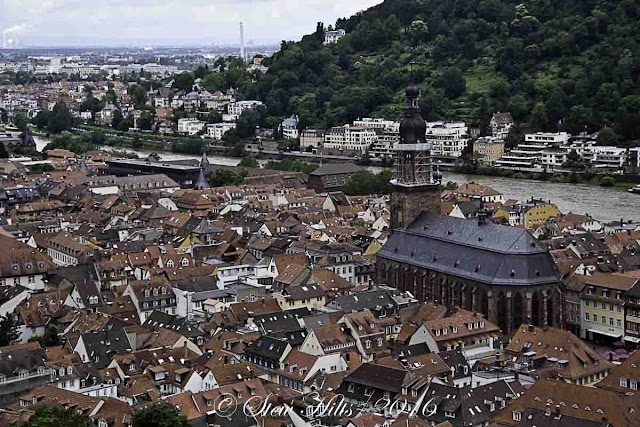 And there is a spectacular view of historic Heidelberg, including that dominating Church of the Holy Spirit in the main market square.

Elizabeth the 'Winter Queen' literally enabled the continuation of the British monarchy, because the last of the direct 'Stuart' family of kings threatened to turn Catholic, which was unacceptable to the British Parliament.  As they sought for an acceptable Protestant alternative, they traced the previous kings' children and came to Elizabeth.  She had had 13 children, the 12th of whom, Sophia, was still alive and was Protestant.  The British Parliament decided that she would inherit the throne, as a grand-daughter of James VI and I after Queen Anne died.  Unfortunately Sophia died a month before Anne, but her son became George I in 1714, generating the succession line the Royal Family has followed ever since.  You might note that the 'Royalty' in the British Royal Family is through the ancient line of Scottish Kings (and sometimes their daughters), not the English Kings who actually died out with Elizabeth I of England in 1603, allowing James VI of Scotland to also plant himself on the English throne as James I of England. 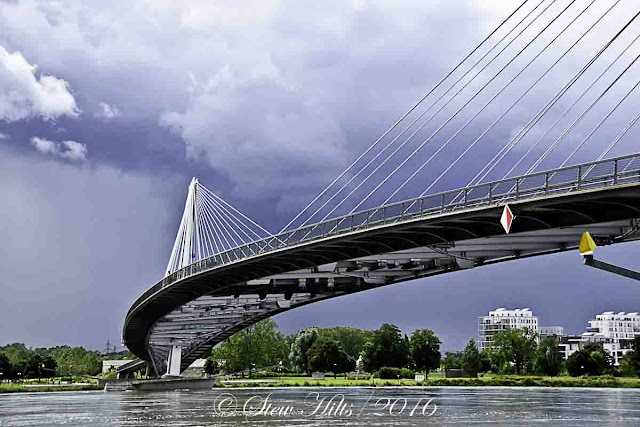 After that brief historical tangent, let me show you the flooding Rhine River.  Water levels were high, and the limiting factor was the height of the bridges.  Thousands of barges and low-lying cruise boats pass under dozens of bridges every day, under strict control.

A foot difference in water level is a lot in terms of the clearance of barges under the bridges.  Our crew was wading while trying to tie up ship. 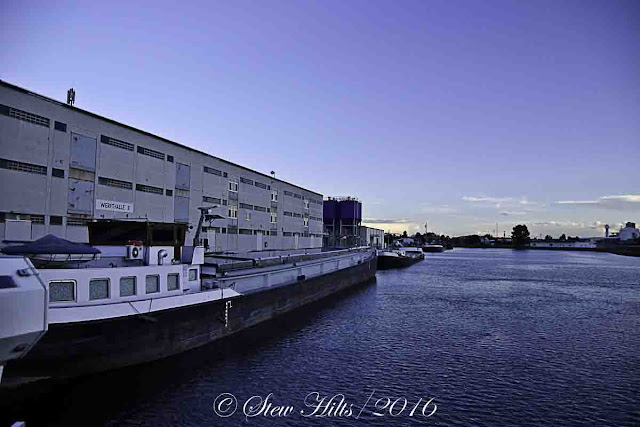 Then we got the news.  This part of the Rhine River had been closed to navigation until the water level receded.  We made our way into an industrial harbour nearby and tied up for the night beside this barge instead of continuing downstream.

We spent a peaceful night, and on the next day were taken by bus downstream for a boat shuffle!  We were loaded onto a different ship, complete with all our luggage, and the cruise continued.  A few passengers were very upset, but to me it was just part of the adventure!

I continue to feel frustrated at not being able to drive or get out and do photography, so hopefully these photos from our trips are ok as a fill-in.  I did get a prescription for temporary lenses in my glasses that will allow me to drive, but of course it will only be ready "in 7-10 business days"!  I wait impatiently!
Posted by The Furry Gnome at 7:27 PM