Before we got to Amsterdam we stopped at the Kinderdijk Windmills, a historic cluster of windmills with a small museum right along the canal we were travelling.  This is one of the best places to see how the older style windmills worked in Holland. 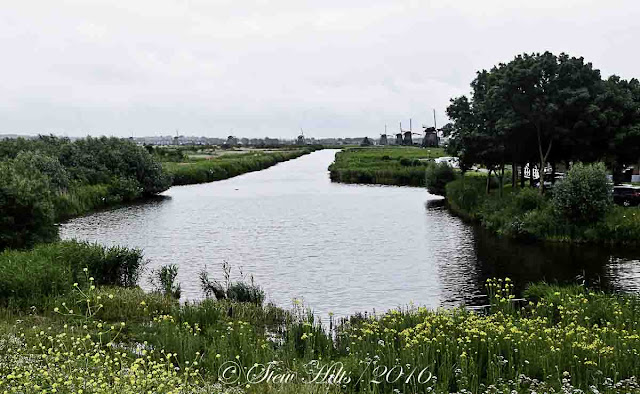 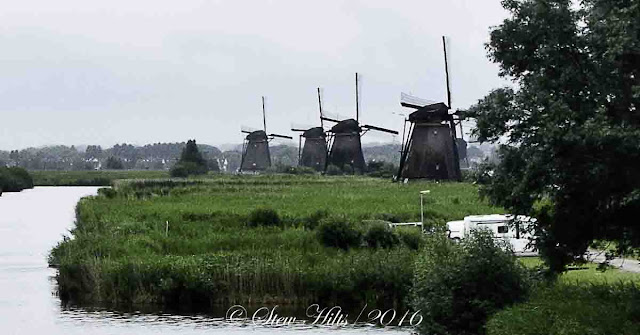 Windmills were used for a number of purposes in Holland.  Some were gristmills, just as pioneers had here in Ontario, but most were to pump water out of the polders into the rivers to enable agriculture across the low-lying land. 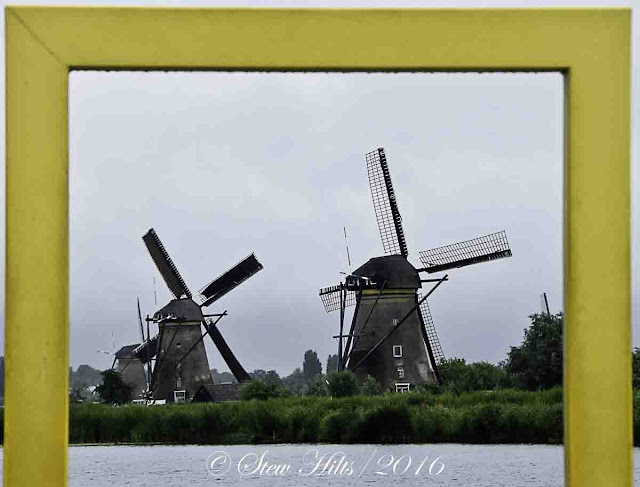 There was a small museum that helped explain what we were going to see.  And it had one of those outdoor 'picture frames' that you could get a picture through, lined up with the closest windmills. 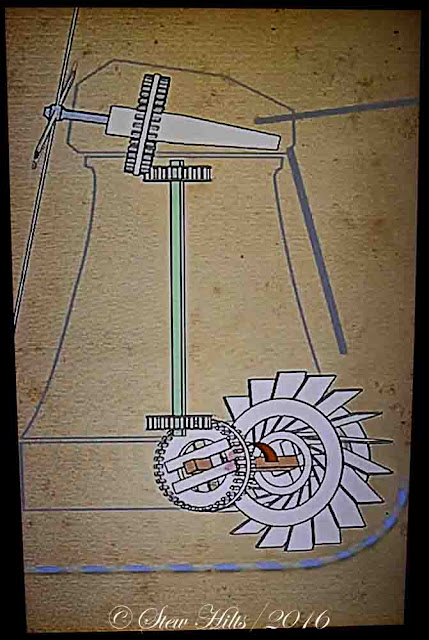 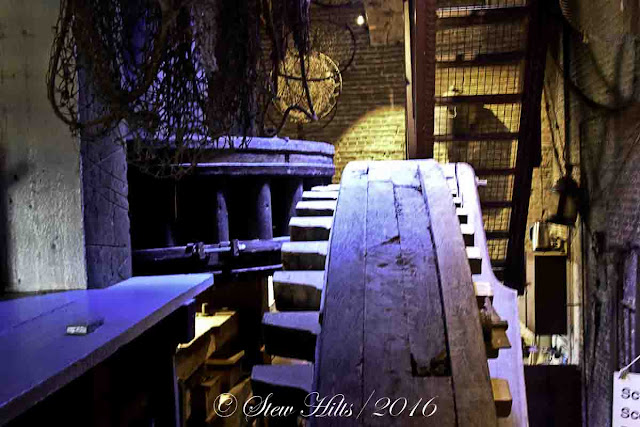 In the museum there were diagrams that explained the operation of a windmill.  The wind turns the upper gear, and inter-locking wooden teeth turn the vertical column.  At the bottom another set of inter-locking wooden teeth turn the actual wheel that moves the water.  In the lower picture is the actual pair of huge gear-wheels we saw in the windmill we toured, a little blurred because it was so dark.

Individual windmills here all look similar, and they can all be turned to face the wind.  There are also 'sails' that extend out over the thin wooden frames of the four windmill blades.  The 2nd windmill on the right has the 'sails' out, and that's the one we toured.  To the left of centre you can see a faint cluster of red umbrellas moving along the walk.  It was pouring rain most of the time we were there. 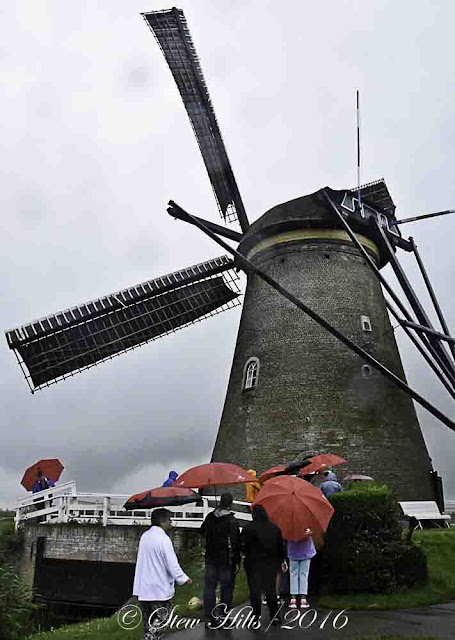 This is the windmill that is kept open for us tourists.  It reminded me of several Great Lakes lighthouse museums around here, the living quarters inside quite similar.  You can see the black sails out to catch the breeze. 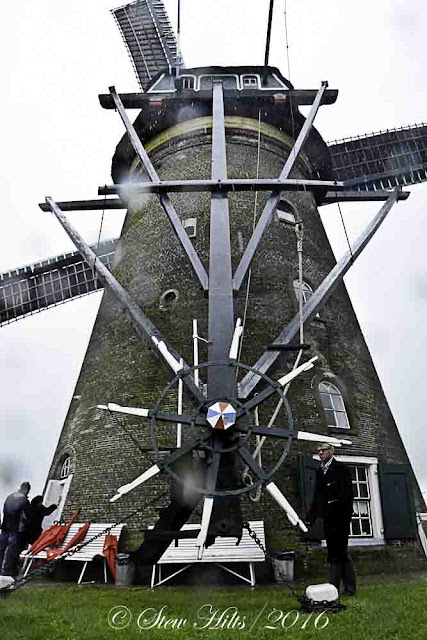 This huge mechanism is used to turn the windmill blades to face into the wind.  Each windmill had a keeper who typically lived inside, and kept the windmill properly adjusted. 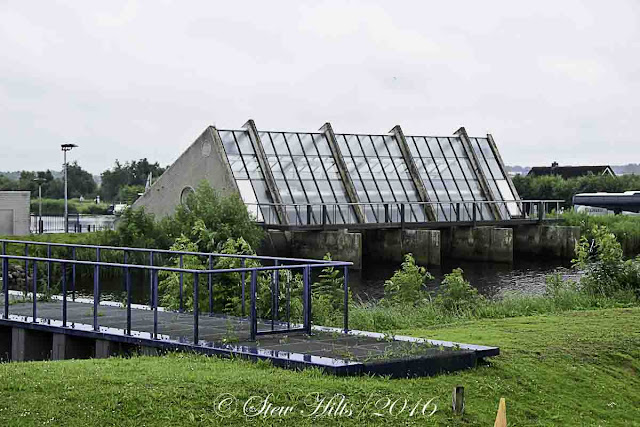 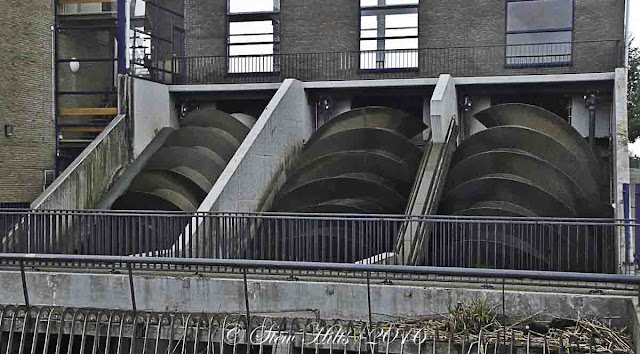 Back at the road, this is the huge modern screw pump that has replaced the work of all these historic windmills.

It was certainly a rainy grey day, but it was a very interesting stop to see these windmills and learn how the kept the polders dry enough for agriculture. 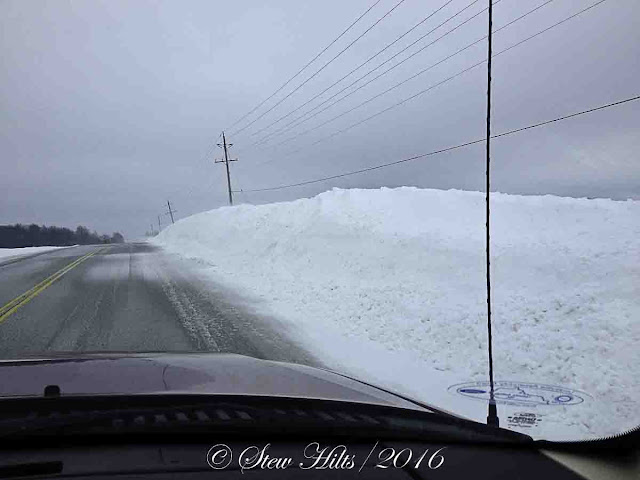 Back here at home it's still very much winter.  One to two feet of snow on the ground, and the world still looks white, usually with grey skies overhead.  But Sunday night we had six hours of fierce winds suddenly, and they blew snow into enormous drifts in very specific locations.  At a Monday morning meeting I heard of friends who had to wait for snowplows to cut through 4, 5 and 6 foot drifts before they could get out to the main road!  The worst drifting many people have seen in many year.  In some of those places the snowbanks are approaching 10 feet high.  I snapped this out the front window while I was being chauffered by Mrs. F.G. (who is getting tired of her new role!)