Amsterdam (and a Cruise Review)

We docked in the Amsterdam harbour, and took a taxi to our hotel.  We'd arranged to stay an extra day before flying off to Italy for part two of our holiday.  We were a little hesitant about the city, but it turned out to be a wonderful two days, a very pedestrian-friendly city centre. 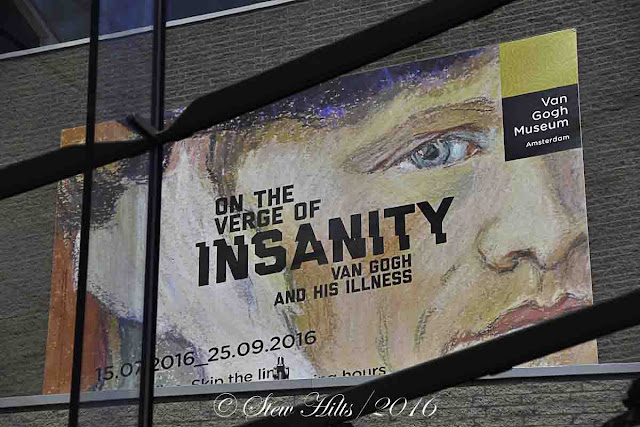 We arrived in the morning after an overnight sailing through the canal, so had time to spare.  We first headed for the Van Gogh Museum, just a few blocks from our hotel.  No cameras inside of course, but a stunning arrangement of his art, telling the story of his life.

The next morning we started by hopping on a tour boat to sail the canals.  If you've ever seen a map of downtown Amsterdam, it consists of a large horseshoe of about 8 canals that all meet at the harbour.  It's a great way to get a good sense of the city. 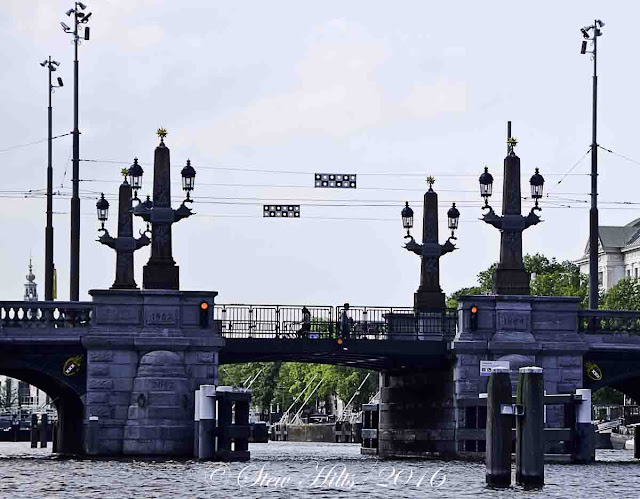 There are of course numerous bridges, but also locks and water control structures than refresh the water in the canals, and will prevent flooding when they need to. 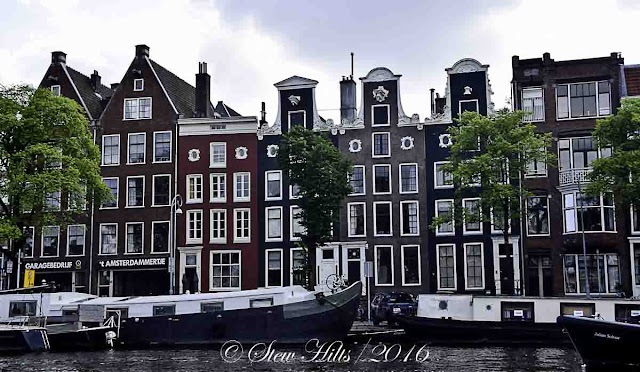 The city was build as a city of warehouses, all of which face the canals, and provide space to hoist trade goods up into the warehouse lofts.  Now mostly a residential area, it was once entirely an industrial area.  During much of the 1600's and 1700's, Amsterdam was the main commercial market in the western world. 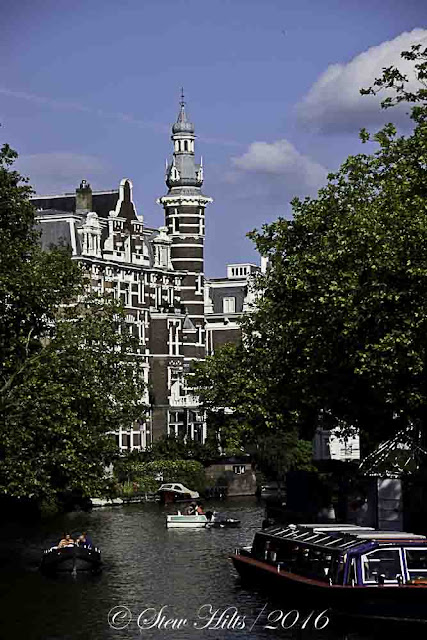 Some of those merchants did very well, and built beautiful homes along the canals, many with a lookout tower of some sort, probably mostly a status symbol.

Today there are also a lot of permanently moored houseboats along the canals. 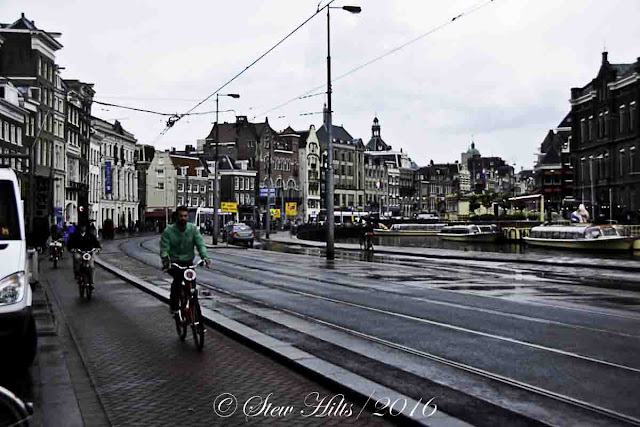 Outside the canals, getting around is by bike or streetcar.  If you look at this photo carefully you'll see a sidewalk on the left (where I'm standing), a red brick bicycle lane, the road with embedded streetcar tracks, another bike lane, sidewalk and a canal.  They say the red colour of the bike lanes is the blood of the tourists who don't watch out carefully enough! 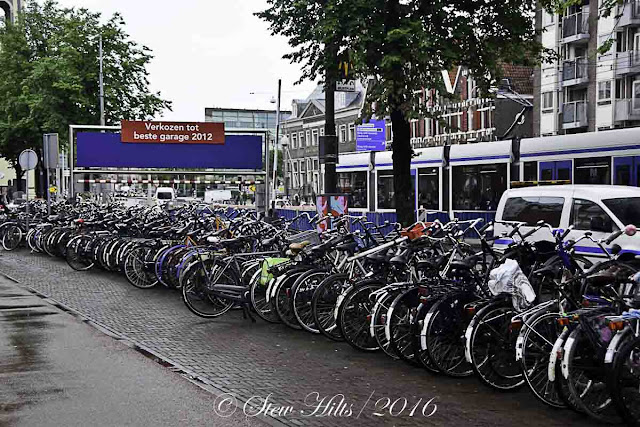 We've never seen as many bicycles as here in Amsterdam.

OF course we noticed a few cheese shops! 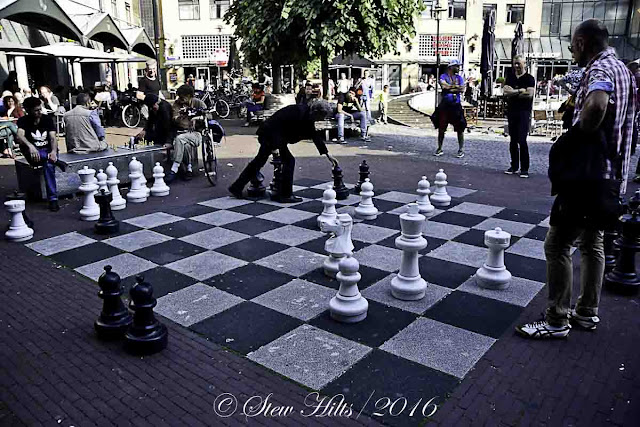 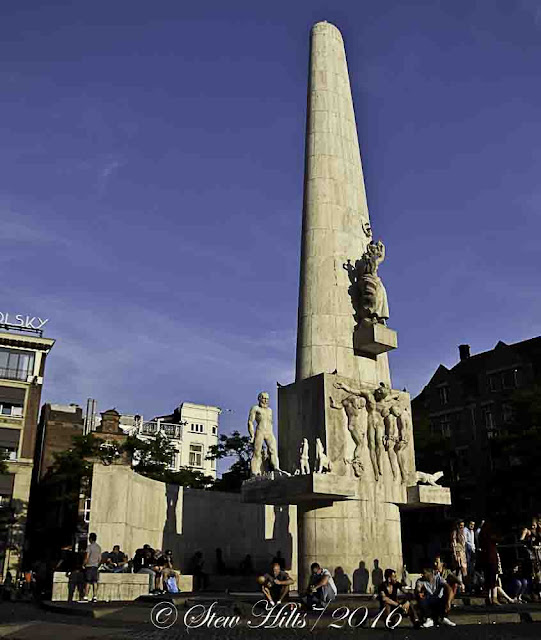 And the national war memorial for WWII, a very important monument for the Dutch, and a popular gathering place. 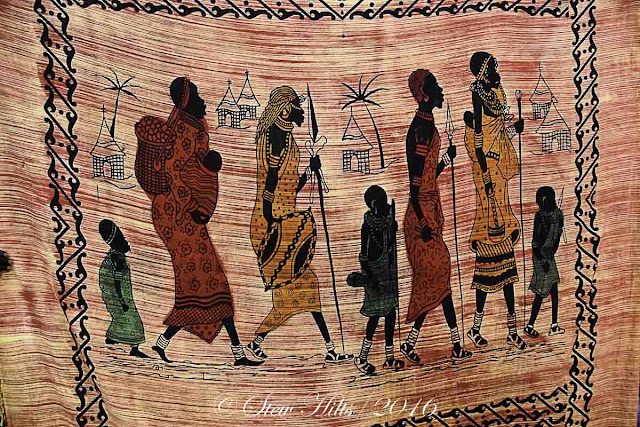 There are several markets, and we wandered through the famous old Waterlooplein flea market, where Mrs. F.G. picked up this interesting fabric from one of the street vendors.  We also enjoyed the famous Amsterdam Flower Market, the only floating flower market in the world.  We'll go there tomorrow.

Cruise Review - I think I owe you a cruise review, because I've glossed over our disappointment even though my posts over the past week have shared some of the great places we saw.  To first put it in context, most of our travels have been on our own, by rental car, staying in B&Bs, especially in England and Scotland.  We have only gone on three big trips where we paid for a cruise or tour.  The first was an adventure cruise around the outer islands of Scotland - fabulous, the best holiday of our lives!  The second was a Smithsonian Institute tour of Italy, letting Mrs. F.G. go 'home' to see the country she came from as a child - fascinating.  And this river cruise was the third.

There were two problems.  First, although the price of all three holiday was about the same, the price per day was far higher for the river cruise, and it just wasn't worth it in comparison.  Second, though the other two holidays were very educational, with knowledgeable leaders and a lot of information about what we were seeing, the river cruise was simply appalling for its total lack of much info at all! I really learned nothing about the Rhine River except what I looked up myself, so I would never recommend a river cruise, nor will we ever take one again, simply not adventurous and interesting enough for us.  If you do, make sure you choose one that provides a good educational experience!  Unless you just go on cruises to eat and relax!