After our visit to Heidelberg and the home of the Winter Queen, Elizabeth Stuart, we were bussed downstream, picked up by another ship, and continued our trip, heading into the Middle Rhine Gorge.  This is the most scenic section of the Rhine valley, from Bingen to Koblenz, where the river breaks through the Rhenish Slate Mountains.  This stretch of the river valley is a World Heritage Site. 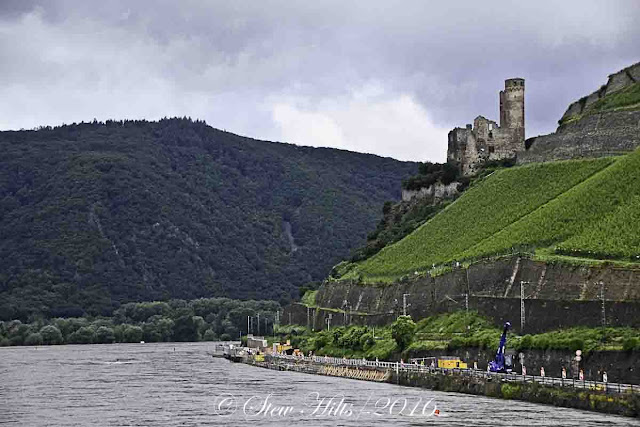 Fairly suddenly you head into a narrow river valley with steep slopes on both sides.  The whole valley is decorated with old castles and vineyards!  This was almost the only part of the river we sailed during daylight, so we settled in and enjoyed it. 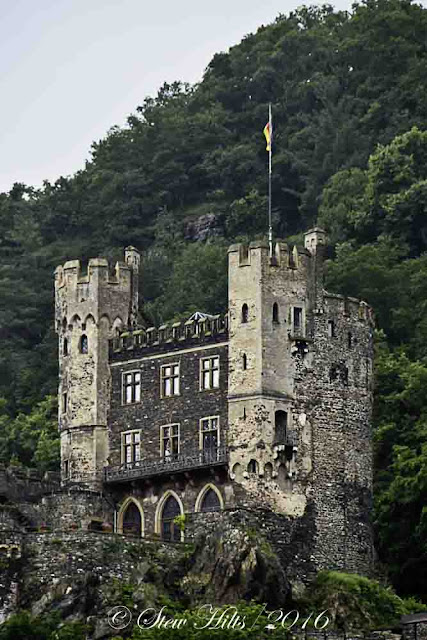 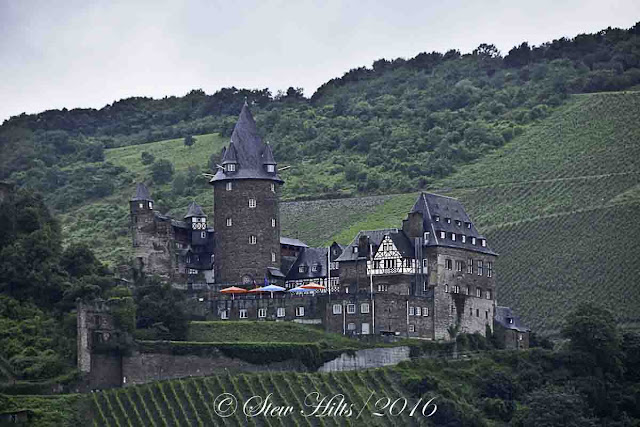 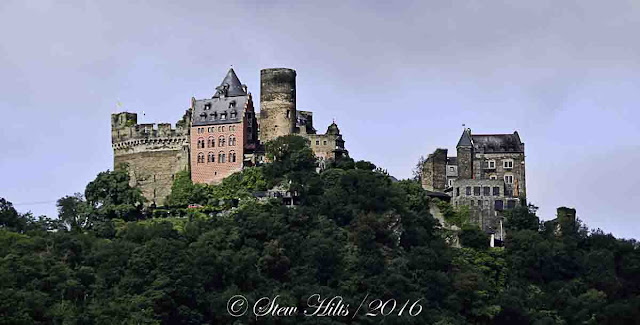 In a 65 mile stretch there are almost 40 castles or castle ruins, perched on the hills overlooking the river.  Almost all of them were largely destroyed by war or age, and quite a few have been restored to be livable.  Unfortunately it was a drizzly rain much of the time, so pix are less than the best. 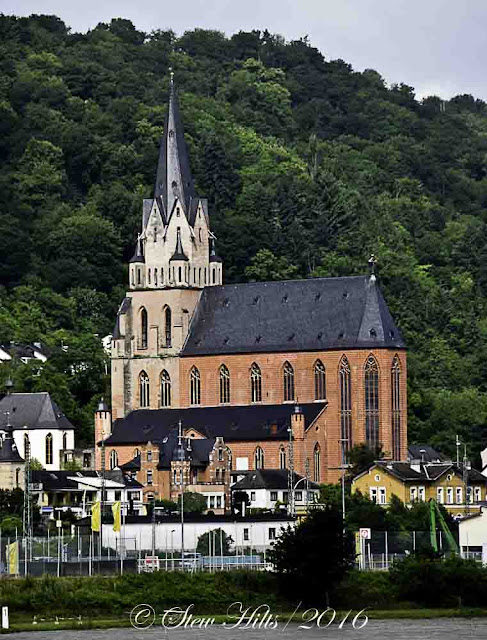 All the villages along the way are in the valley too, as is the highway and railway.  There are some nice churches like this one. 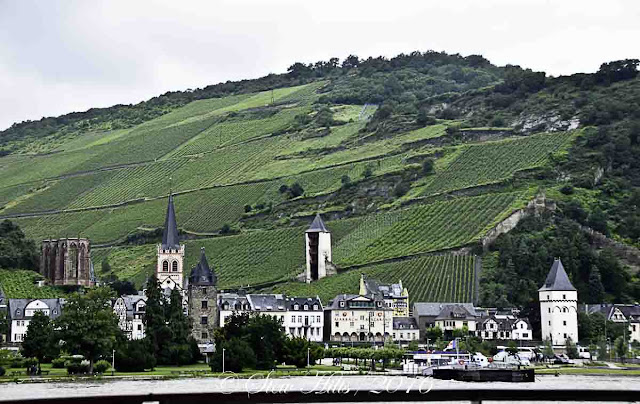 There are miles of incredibly steep vineyard slopes, like the ones behind this village.  Those on south-facing slopes apparently do quite well. 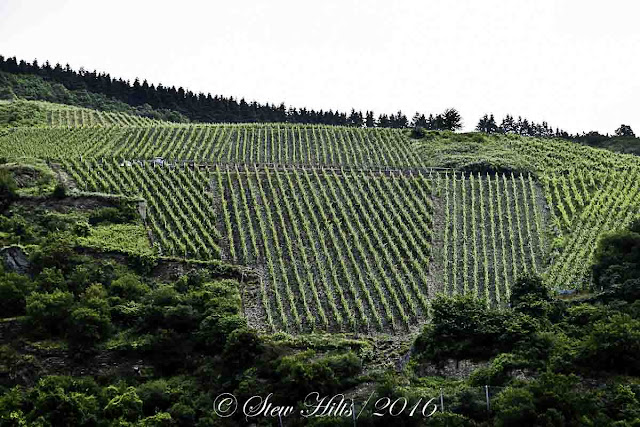 I was just surprised at how steep they were, especially when you compare them to the old irregular terraces (below).  Careful modern farming techniques control the erosion.

This bend is the narrowest and deepest part of the river, and is said to be the site of many shipwrecks.  Both the steep slate rock on the right bank, and a statue around the bend are known as the Lorelei.  Historic explanations range from `a murmuring noise from the fast currents in the river` to a siren luring sailors to their death with her songs. 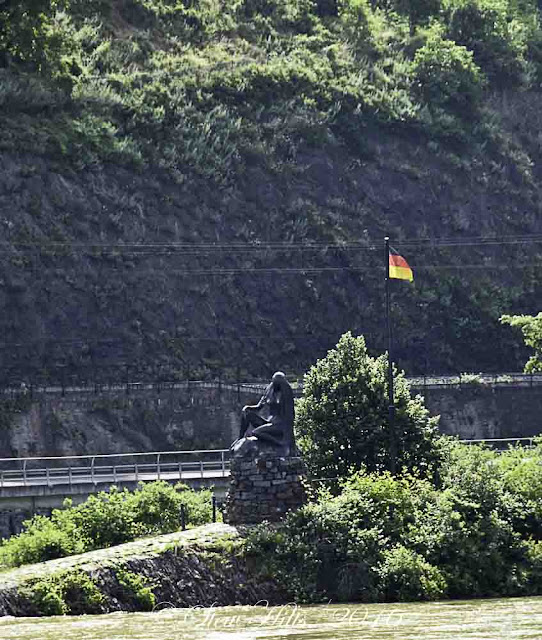 And this is the statue of Lorelei, right on the river bank.  Whether she lured sailors with her song, was sunbathing on the beach, or was combing her beautiful blond hair, she developed quite a reputation! 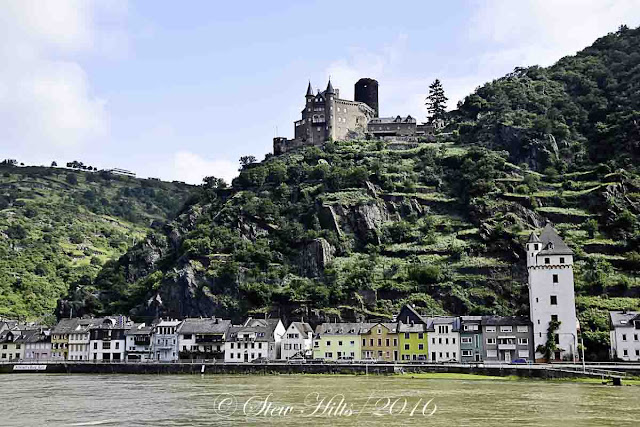 Just downstream is a good example of the old irregular terraces, all built by hand, extending up behind this village.  Most of the tiny terraces like these have been abandoned for modern vineyards like this one below. 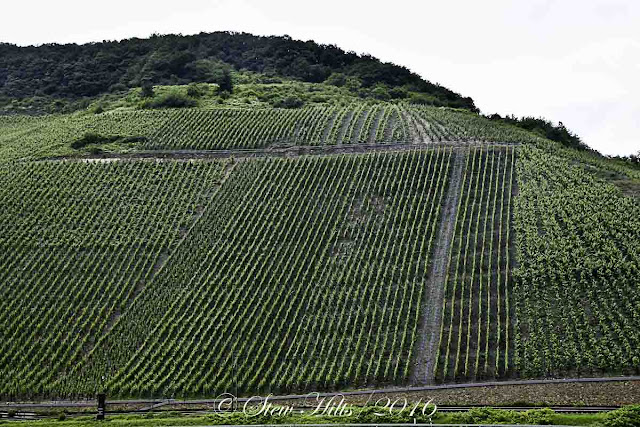 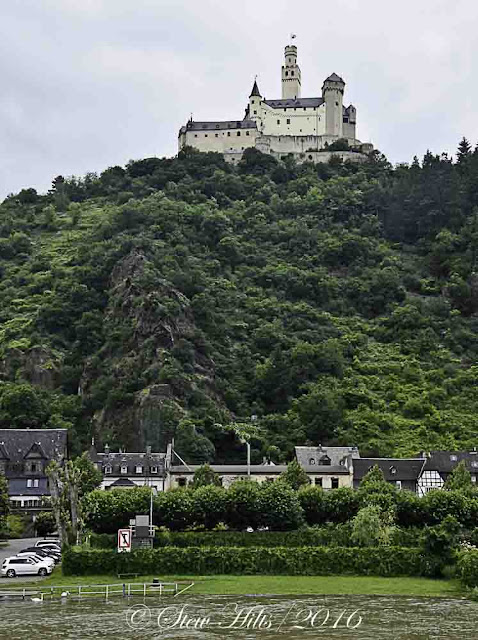 We ended the day below the famous Marksburg Castle, the only castle along this stretch that was never destroyed, and is still largely in its original condition.  And then we went for a visit!