Cologne Cathedral is one of the great cathedrals of the world, one of the largest, tallest, and holding some remarkable treasures.  After being bused to the town centre, we had several hours to explore the cathedral and environs on our own.  It certainly was spectacular! 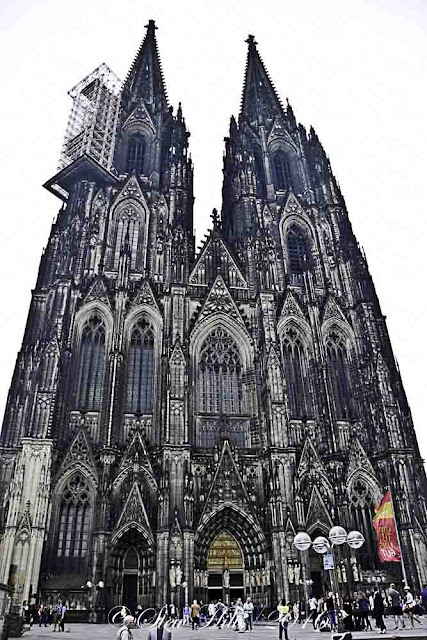 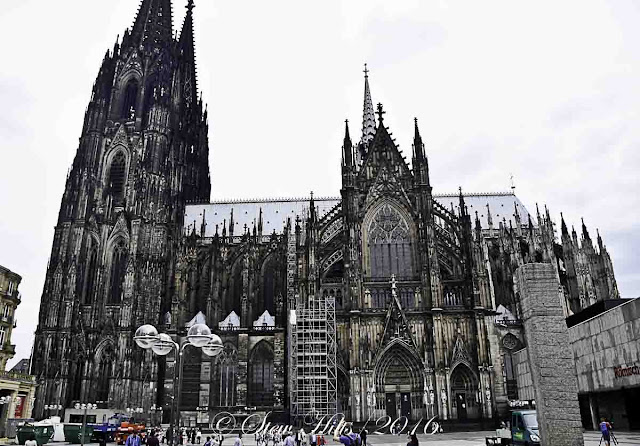 This is a simply enormous church!  Even though there's a large open plaza around two sides, I couldn't get far enough back to get a full picture of the building.  It has the largest facade of any church in the world. 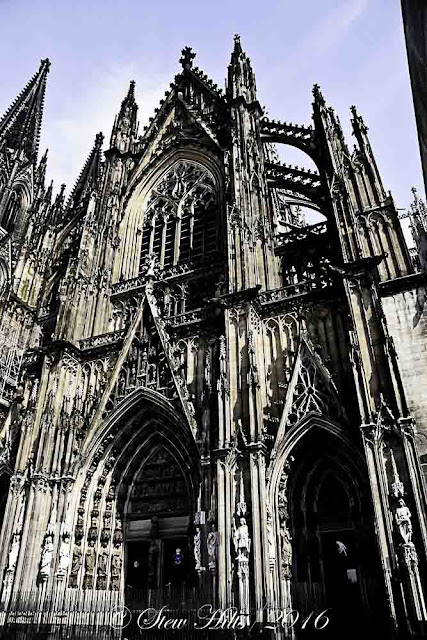 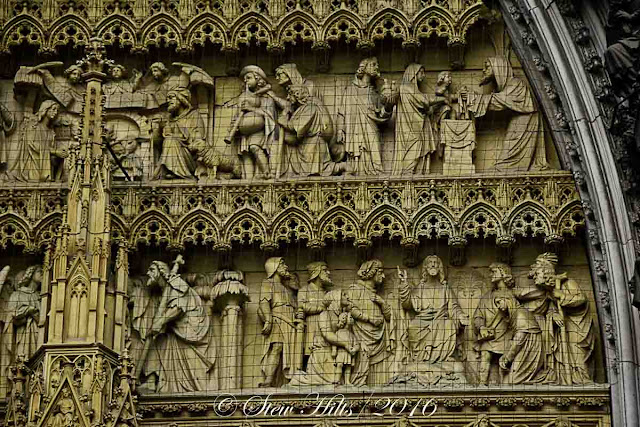 As always on the medieval cathedrals, the stone carving is amazing.  In this case, construction began in 1248, but it stalled in the late 1400's, and wasn't begun again until the mid 1800's.  In any case, it was finished, and is now Germany's most visited tourist attraction, and a World Heritage Site. 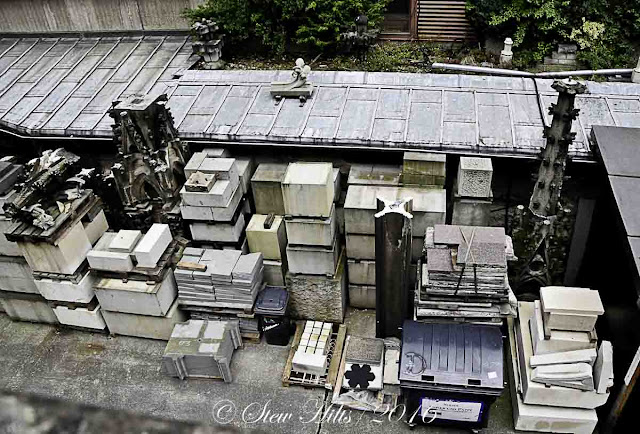 The rock the church is built of weathers badly, so restoration is a constant ongoing business.  There is almost always some scaffolding someplace, and a permanent stone mason's yard beside the church. 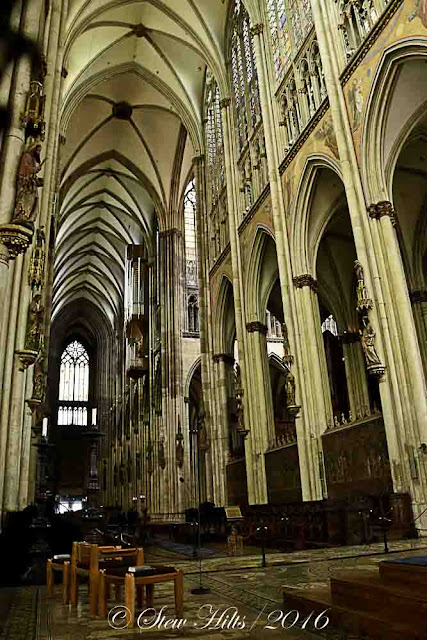 The nave of the church is huge, with one of the highest vaulted ceilings of any medieval building.  There are two cross-arms, equally high, and two rows of a dozen huge pillars each (with matching external flying buttresses) to hold up the roof. 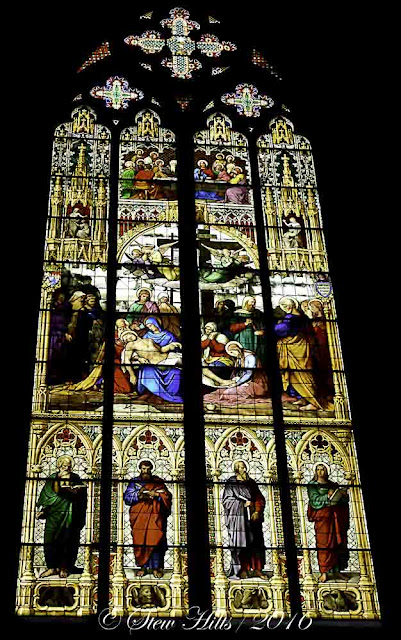 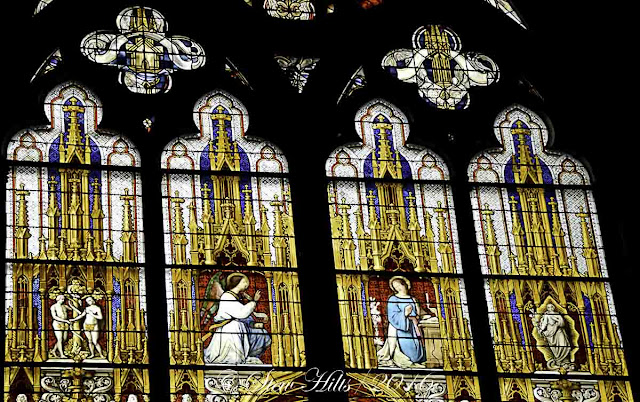 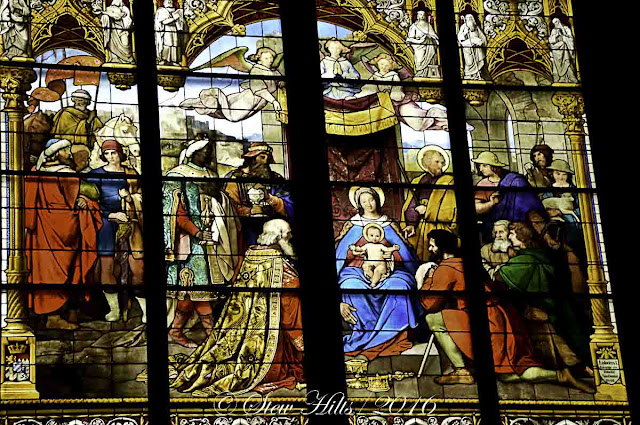 The stained glass windows are stunning, though some of them are relatively new, not medieval.  The colours are brilliant, as most have been cleaned in recent years. 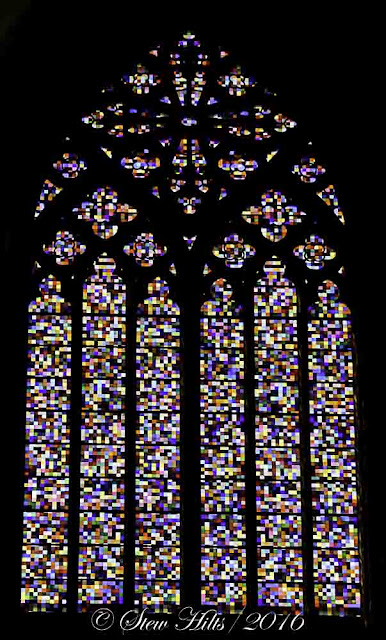 An unusual new stained glass window was added in 2007.  In case you think it looks like a lot of pixels, that's because it is, 11,500 of them, randomly arranged by computer. 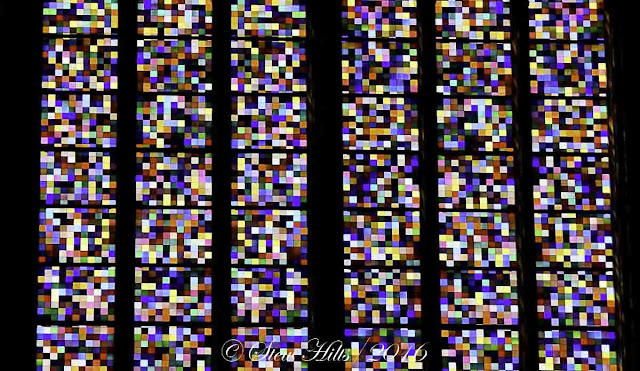 Designed by the German modern artist Richter, it is intended to pattern the floor of the cathedral in colour, as this is the window in the south transept.  The Bishop disagreed strongly enough to stay away from the dedication!  But we thought it was quite striking. 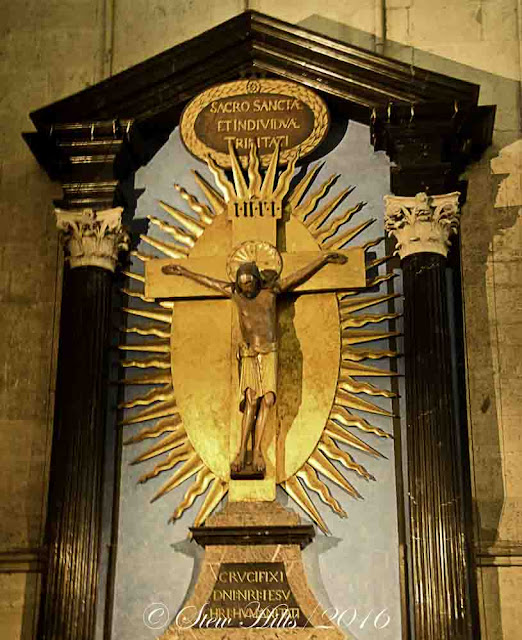 There are several valuable treasures in this cathedral.  This is the Gero Crucifix, one of the largest and oldest such artworks in northern Europe.  It was commissioned by Bishop Gero in the late 900's, and hung in the earlier church on this site before construction started on the present cathedral. 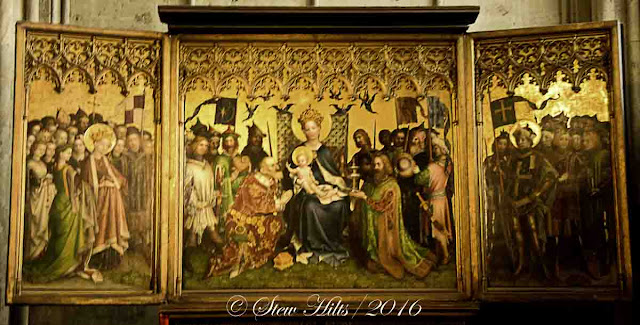 This large triptych (three part painting) is the altarpiece of the City Patrons by Lochner.  It only dates from 1445. 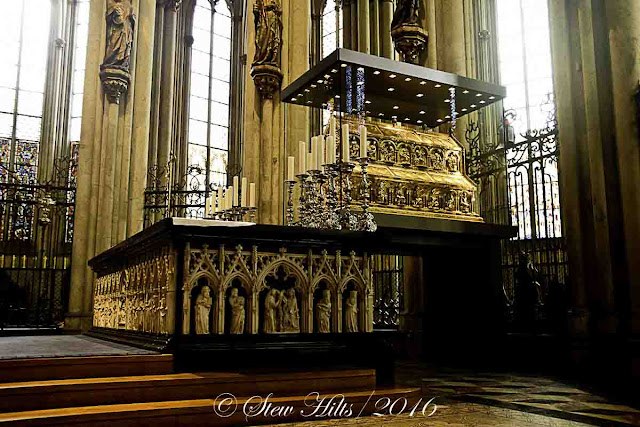 The most unique treasure in this cathedral is the Shrine of the Three Kings, seen here in its bulletproof glass box above and behind the altar.  It was carved in gold after 1164, to hold the relics of the three Wise Men, or Magi.  When opened in 1864 it did contain bones and fabric.

Apparently Barbarossa, Frederick I, the Holy Roman Emperor at the time, stole the relics from the cathedral in Milan during one of his campaigns.  (Both present-day Italy and Germany were still a number of small independent states until much later.).  This is the reason that the cathedral was built in the first place, as a suitable home for the reliquary holding these priceless relics.

The altar itself is quite astonishing, a single 15 foot long slab of black marble installed in 1322, supported by niches in white marble containing smaller carved figures. 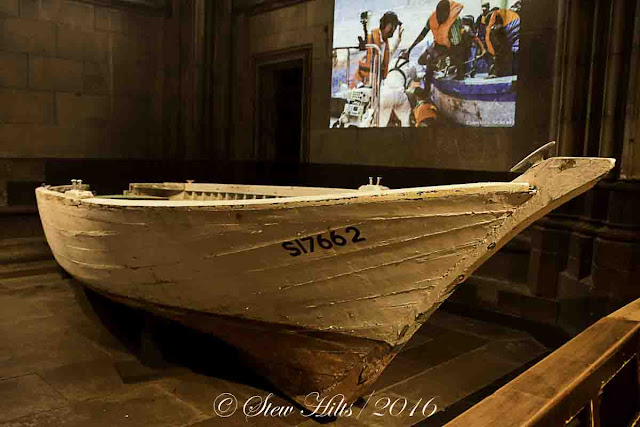 Personally, I found the most interesting thing in the church was this boat, one of the boats that migrants had used to cross the Mediterranean in recent years.  Note the video in the background.  We found one of the church officials (draped in red, so easy to identify), who explained their hope to highlight the refugee issue in Germany by having this right inside the church, a purpose that I thought quite suitable for a church today. 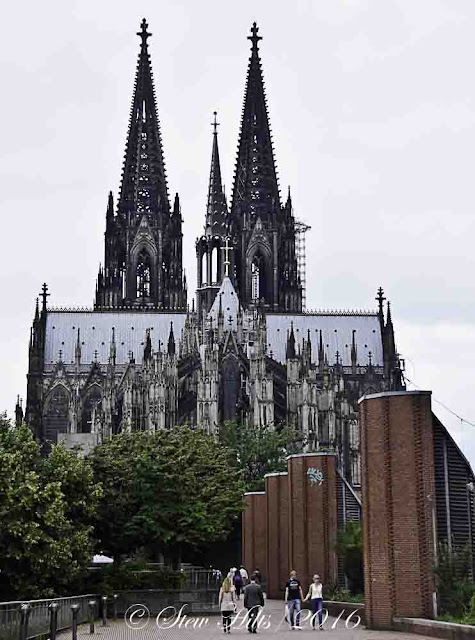 We didn't get to explore much around the town, but we did walk behind the church and out onto the railway bridge, which leaves from the underground station right behind and beside the cathedral.  I believe those red brick structures are ventilation for the station below ground. 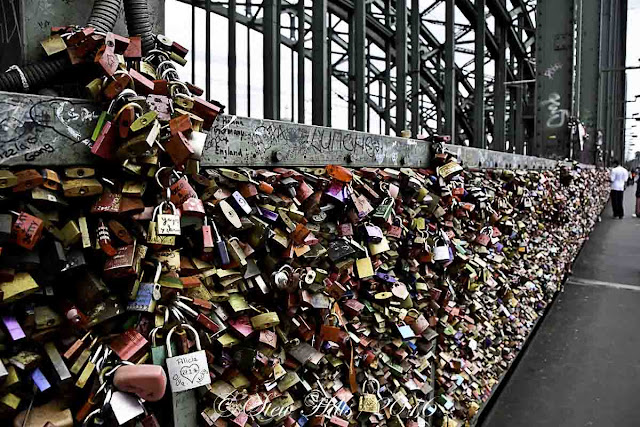 While trains speed out the centre of the bridge, a long pedestrian walkway across the river has become a 'lock bridge', like those we saw over the Seine in Paris.  I'm sure there are many other interesting things to see in Cologne, but we had to meet our bus and return to the ship - time limits are one of the frustrations of an organized tour.

Lots more snow here today, so another day of snow-blowing and pushing snow off the deck.  Tomorrow was supposed to have sunny breaks and no snow, but now they's saying it will simply shift from the 'Colorado low' that passed through, to lake effect streamers with lots of blowing snow.  Winter is showing no signs of slowing down here.  Maybe I'll even get out and get some pictures.