On Saturday we had time to go exploring, so we headed first to the National Museum of History with its amazing display on the First Peoples of Canada's Northwest Coast.  This especially interested us because we've travelled through that region, seen several native villages, and watched totem poles being carved.  And William lived and worked in that area for quite a few years. 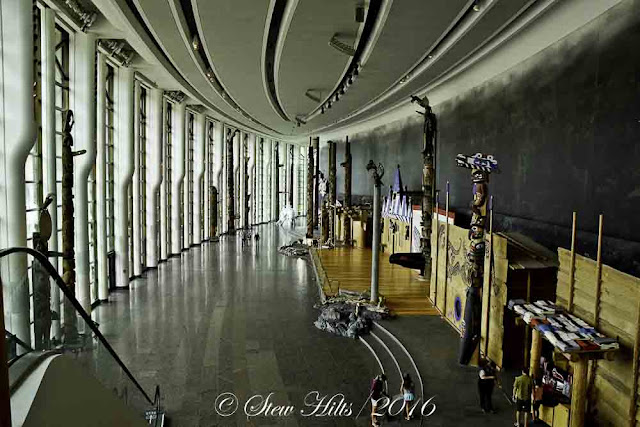 This is the Grand Hall of the museum, an incredibly striking piece of architectural design (as is the entire museum).  It's widely used for state dinners, special occasions, and museum events.  One entire wall features the story of the Northwest Coast First Peoples, including those iconic totem poles.. 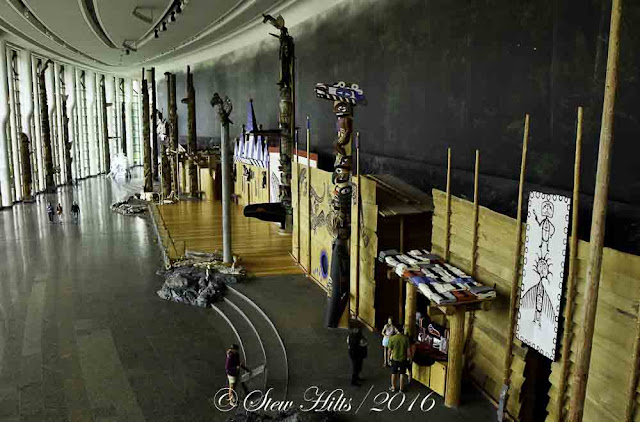 Once you get over the striking first impression, you start seeing the details.  This was a wealthy native culture, with ample food supplies from salmon runs and the sea, and amazing building materials in the enormous west coast cedar and hemlock trees.  The hall consists of six housefronts, representing different nations along the coast, but put together like a real native village along the shoreline.  You can see the first four house fronts here.  Note the blankets above the entrance to the first house; symbols of the potlatch, these would be given away to guests during feasts. 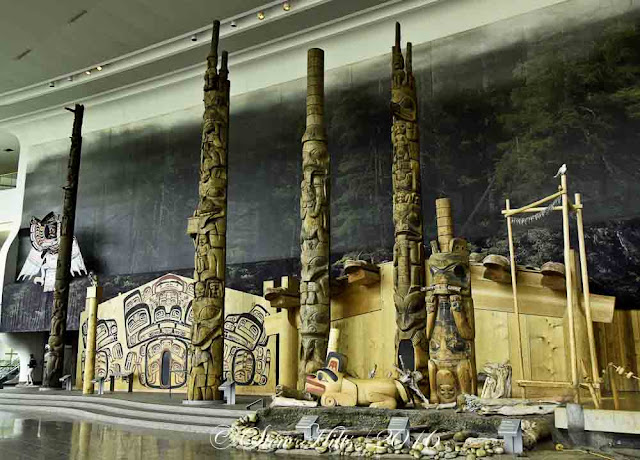 These two houses at the farther end represent the more northern native groups, the Haida and the Tlingit, with several massive totems out front.  This approach to the gallery, and the houses themselves, were developed in close consultation with west coast communities, and the houses were built in those communities by native artisans, then shipped to Ottawa for this display.  They are all built using traditional methods, and all represent actual known houses, based on early photography. 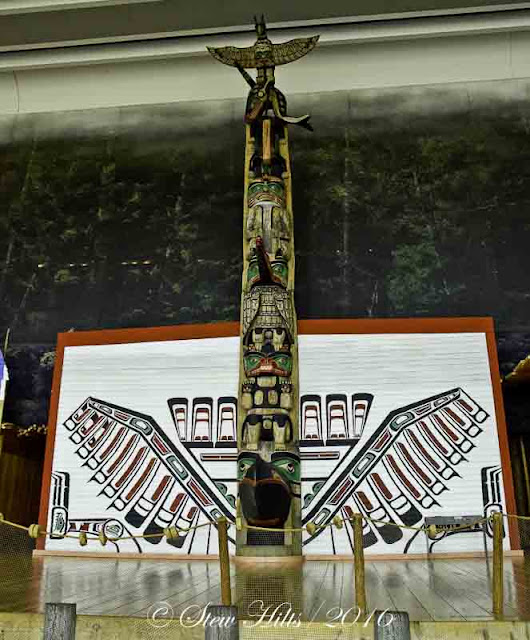 This is a reproduction of Chief Wakas' house that stood in the community of Alert Bay, in the mid-coast region early last century.  A totem was often used to mark a chief's house; the carvings represent ancestral lineage stories of the chief.  The central coast groups obviously favoured these painted housefronts. 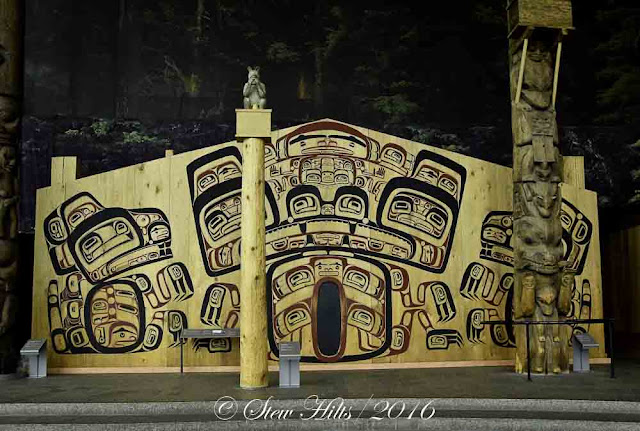 This house was based on the styles of the northern groups who spoke the Tsimshian language, including the Gitxsan First Nation who maintain the Ksan Historic Village at Old Hazelton on the Skeena River.  We stopped there on one of our camping trips when the kids were young; it's one of the places where we watched a totem pole being carved.  An amazing place to visit if you're ever passing by. 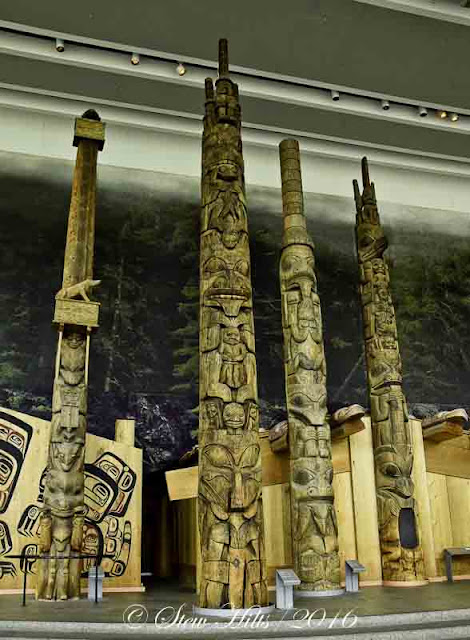 These huge totems stand outside the Gitxsan house on the left, and a Haida house on the right.  Haida Gwaii is the other place we've seen a totem pole being carved when William flew us out to the islands about a decade ago.  The Haida house was constructed in the village of Masset before being shipped to Ottawa. 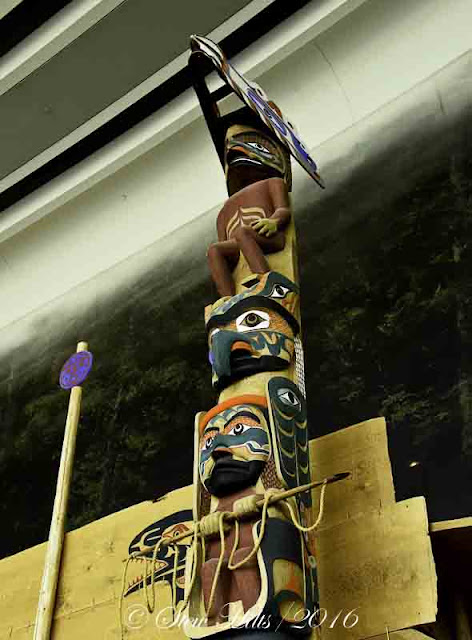 Totem poles are perhaps the most interesting symbol of this west coast native culture.  This one is the Nuu-chah-nulth Pole, carved by Tim Paul especially for the opening of this museum.  The top figure is Chief Ma-tia-ho-ah, a founding ancestor, with a striking headdress.  The next down is a Thunderbird, with a mythic sea mammal hunter on its chest.  Note the boards making up the front of the house behind. 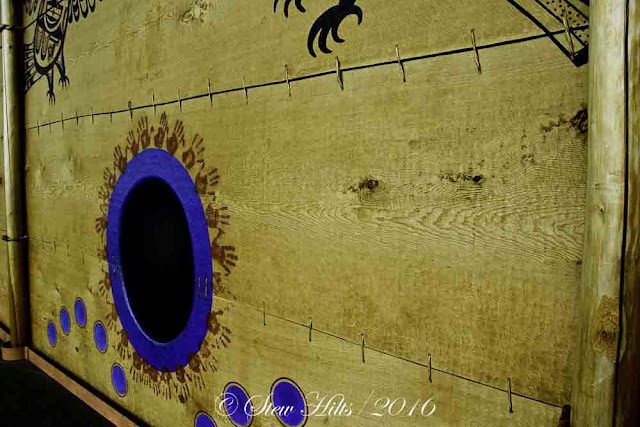 I was as intrigued by the construction of the houses as by the artifacts inside.  This house front is made up of 6 massive boards, about 2.5 feet wide each, and 2" thick, split out of a huge cedar log and held together with cedar withes.  I've simply never seen boards like this before. 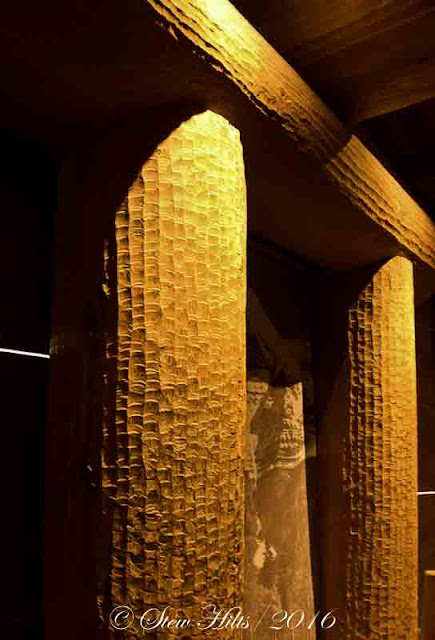 Inside, the structure of the house was built from massive cedar poles and beams, here hand-adzed to create that unique scalloped finish. 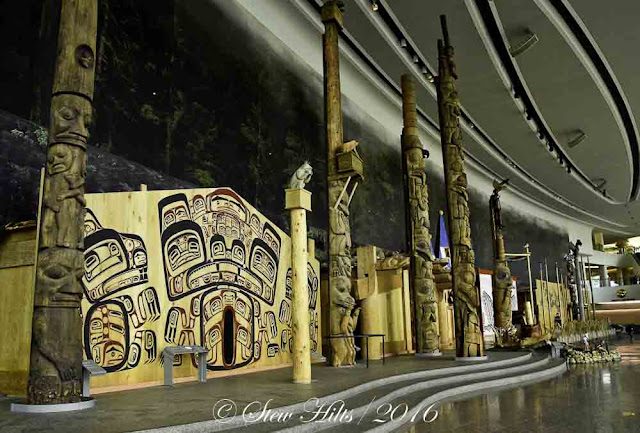 I'm going to remember this room and what I learned about west coast native culture here for a long time!  I'm so glad we took time to visit.  (And I got lots of ideas for travelling around B.C.!)