The berry jams got made earlier in the summer, both strawberry and black currant this year.  Now it's time to make more jam and other good stuff, based on what's in season.  We probably don't consciously link what's going on in the kitchen with what season it is, but we should!  And this is the season of more fresh fruit and veggies! 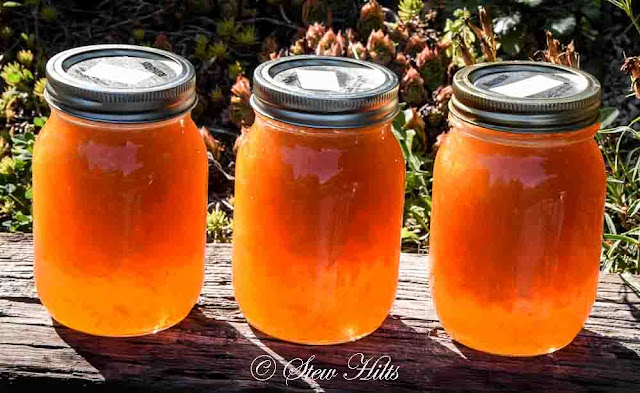 The fruit this time was peaches, from the Niagara Fruit Belt.  There are fewer and fewer peaches grown in the Niagara region, as grapes for wine have taken over, but it's the best peach-growing area in Canada.  So about a dozen jars of perfect peach jam were made. 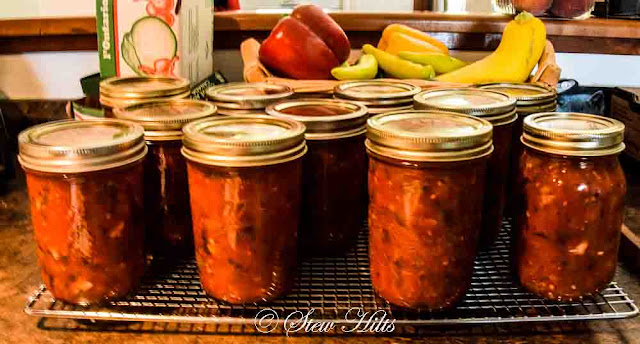 Next came the salsa.  I can't begin to tell you how many different veggies went into this batch, and the two below, but there were lots.  At the local market just now you can find fresh just about everything - tomatoes, cukes, peppers, onions, cauliflower, broccoli, and the list goes on.  It all gets used.

Over the past weekend a very tasty zucchini relish was created, which I've already tasted and pronounced excellent.  ( I don't have to taste all the jams, because I already know that Mrs. F.G. is the best jam maker in the world; they're my winter comfort food.)

And finally there was the antipasta, a veggie-based spread we love on crackers and such.  This one did depend on a couple of exotic veggies, like olives, along with the fresh stuff.

Altogether I think nearly four dozen jars of these have now been put down.  And we have canned peaches, apple sauce and raspberry jam left from last year.  I'm actually being encouraged to eat more of all these to be sure we don't have leftovers next year!

I'm sure that canning like this is a big tradition in many rural homes.  My niece told me that my sister was working on 5 dozen jars of pickles alone. This time of year it's a big mark of the seasons.  One of the nicest things about early fall is that it's harvest season in the garden and veggie season at the market!