We spent the weekend in Ottawa, our nation's capital, honouring our son William and 11 other firefighters who died in Canada during 2015.  The main service was held at the national memorial, a wall now containing over 1300 names of the fallen, including William, whose name is in the lower left below. 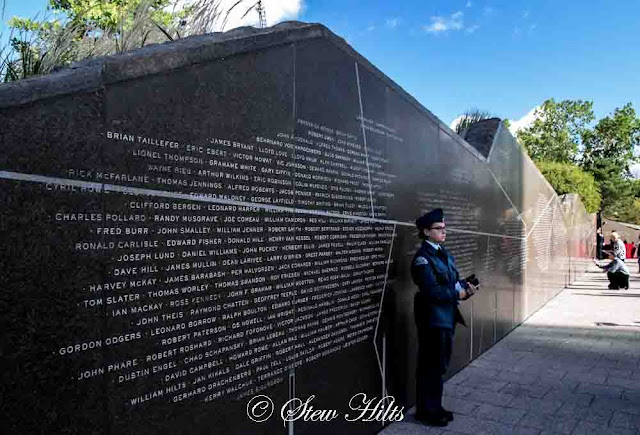 Names on the wall are organized by the province the firefighter was from.  New names are added around the outer edge of each cluster.  Firefighters honoured include both those who died while actually fighting a fire, and those who died of fire-related illness. 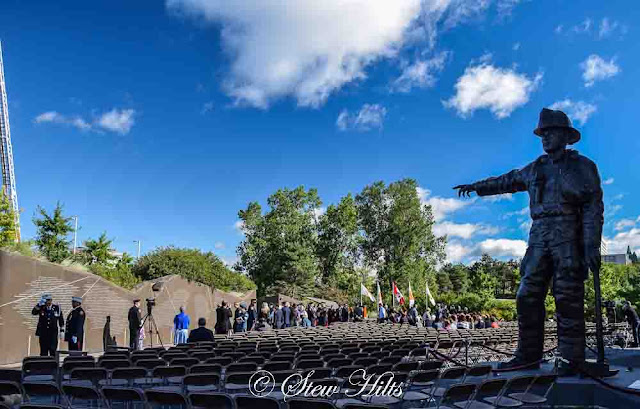 There a statue of a 'Big Guy' as they described it, pointing to the names of his fallen colleagues along the wall. On Sunday the space in front of the wall was occupied by chairs for the families and supporting firefighters. 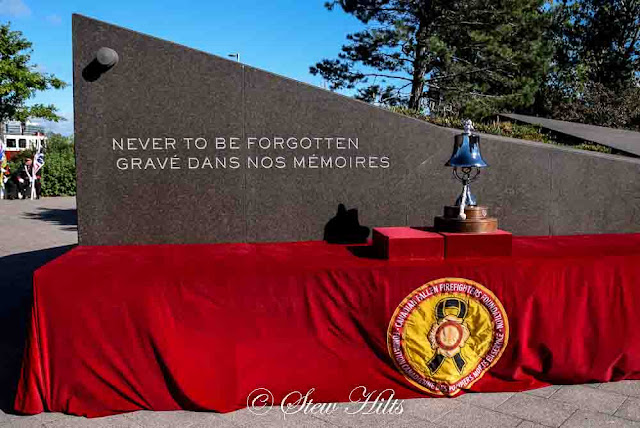 A table at the front provided a place where helmets were placed for each family during the ceremony.  The bell symbolizes the 'last call' for a fallen firefighter. 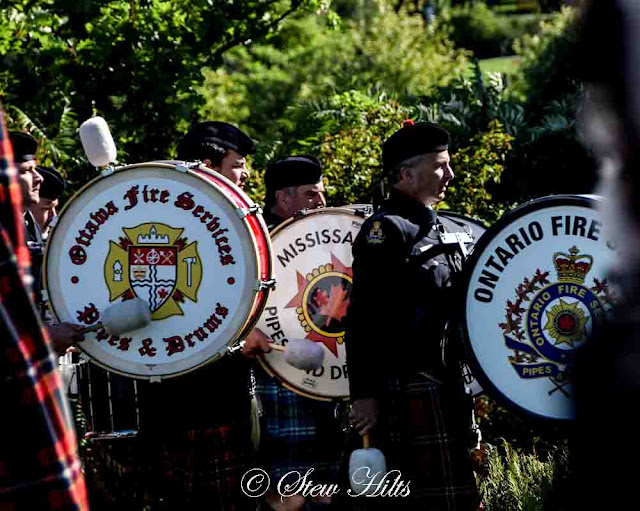 A big highlight was the support shown by firefighters from across the country, as well as the pipe bands who marched in to surround the seated family members.  We were of course participating, so the pictures don't even begin to capture the atmosphere. 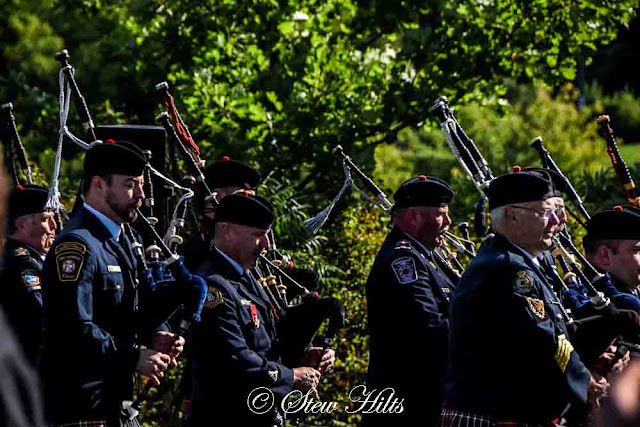 If nothing else, the music made it very memorable for us - probably moreso than the speeches! 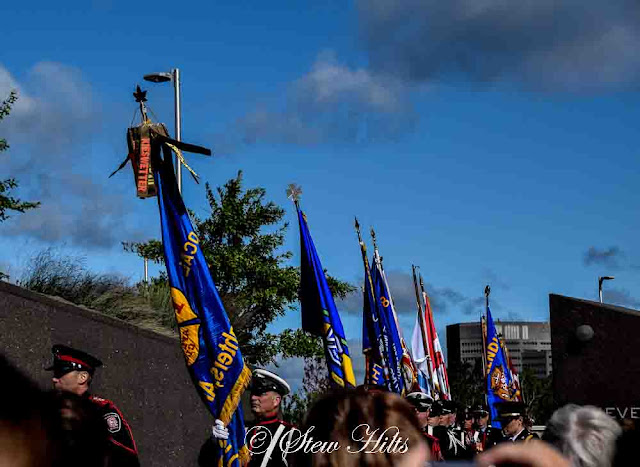 There were a lot of flags carried in too, emblematic of the many companies of firefighters who sent representatives.  Three of William's buddies from high school who we've known for years drove in to be there too. 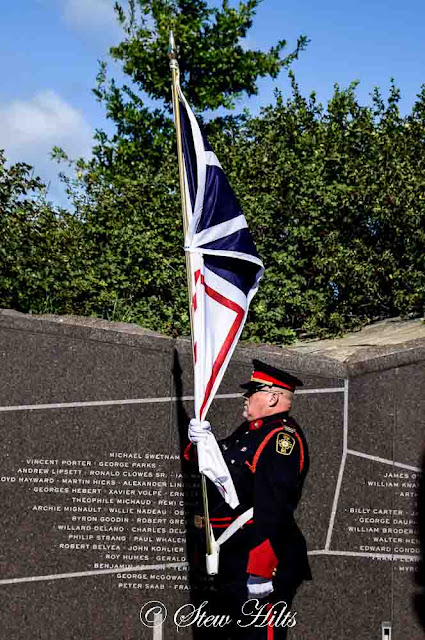 Firefighters in parade dress surrounded the site by the time the formal ceremony got underway.  This is the flag of Newfoundland and Labrador. 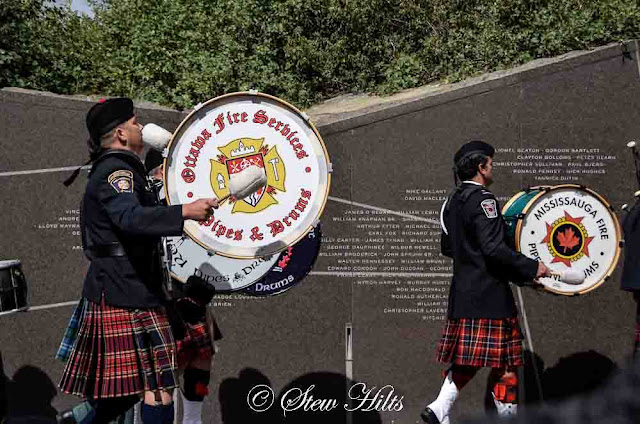 At the end of the service, all the pipe bands marched out again.  I expect the marching bands will be one thing our grandson remembers; I know I will.. 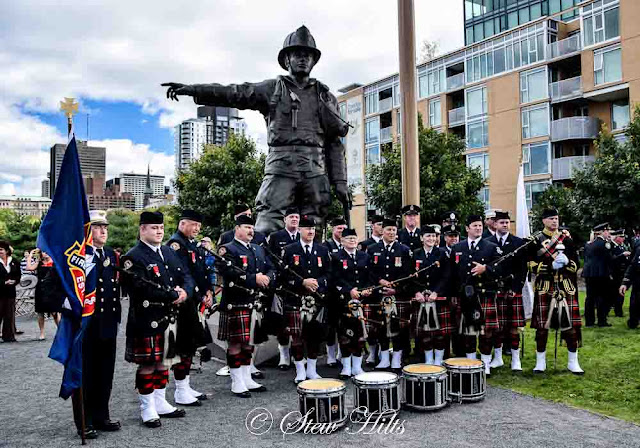 The 'Big Guy' was a popular place for photographs afterwards, here one of the pipe bands getting a group picture.

The Canadian Fallen Firefighters Foundation, who spear-headed the building of this permanent memorial and organized this ceremony, deserve a great deal of credit.  Always held on the second Sunday of September, this year the memorial coincided with the 15th Anniversary of the 9/11 attacks in New York, where 343 firefighters lost their lives, a tragedy not forgotten during this ceremony. 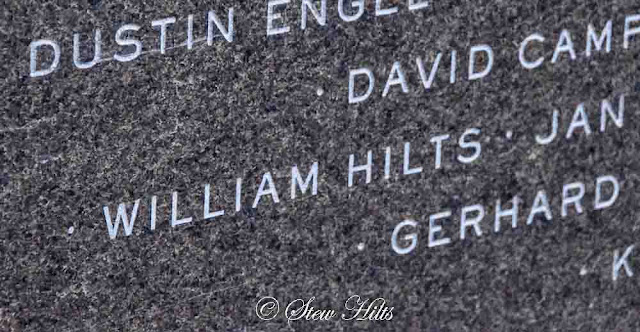 I decided not to even try to write about the spirit and emotion of the moment for us here; it was of course deeply personal and overwhelming.  Our whole family was there, our daughter and her family flying back from B.C. after just moving out there one week ago!  If you hven't read William's story, you can find it under the tab for 'William' above.