I can't remember a wilder series of changes in the weather over 5 days - ever!  On Thursday we didn't get the big snowstorm that was forecast, but we did get a little, and then the freezing rain, giving us a genuine ice storm.  Then Easter Weekend arrived, and we had two beautiful sunny days, and all the ice and snow melted away; the temperature hit 17°C here!  Then we had heavy rainfall overnight - very heavy rainfall, for 12 hours, and now we're back to snow!  What a rollercoaster over 5 days! 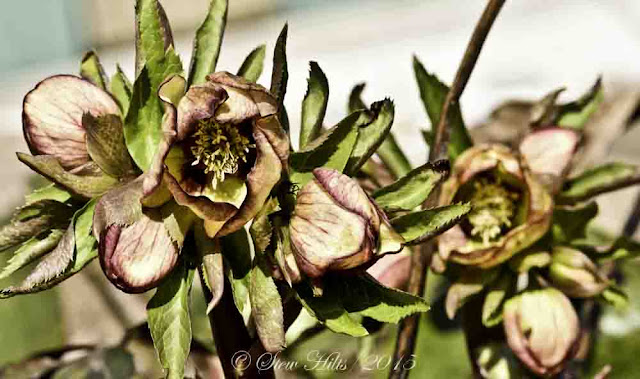 First, I should report the faithful ressurection of the Pasque Flowers, covered in ice and snow 24 hours before (see the contrast at the end of Friday's post).  A fitting symbol of Easter Sunday here, which we spent with visiting family, including our wonderful grandchildren.

It all started with the ice storm on Thursday, when the ice just kept accumulating.  We suffered no serious damage here, but friends nearby were without power for two and a half days! 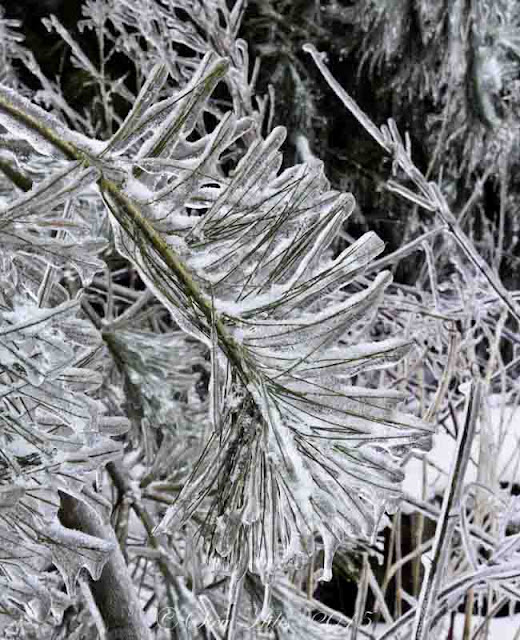 The evergreens suffered the worst, accumulating ice on every needle. 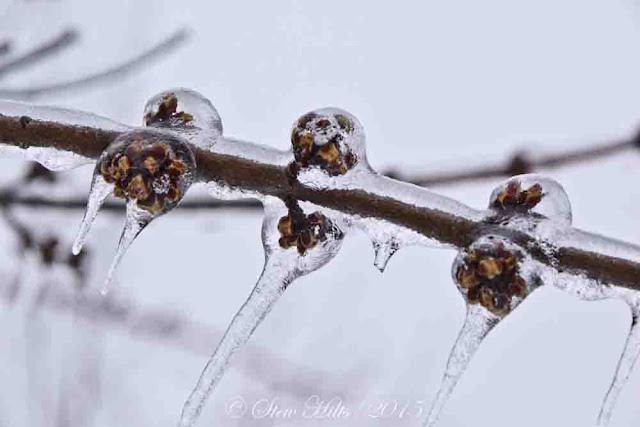 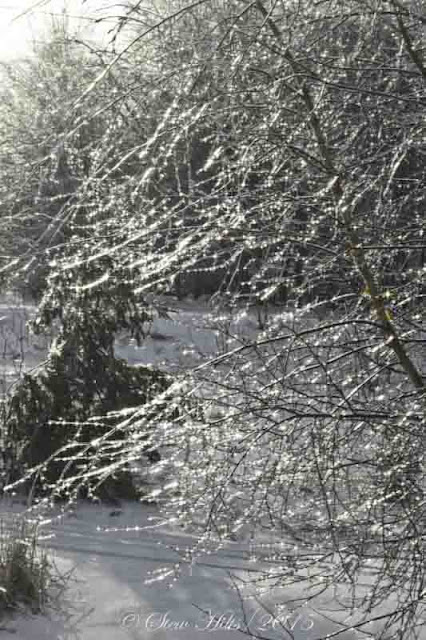 Then on Saturday morning the sun came out.  I failed to get a picture of the sunny skies, too busy with family, but for a short while all the ice on the trees was magically sparkling in the sun. 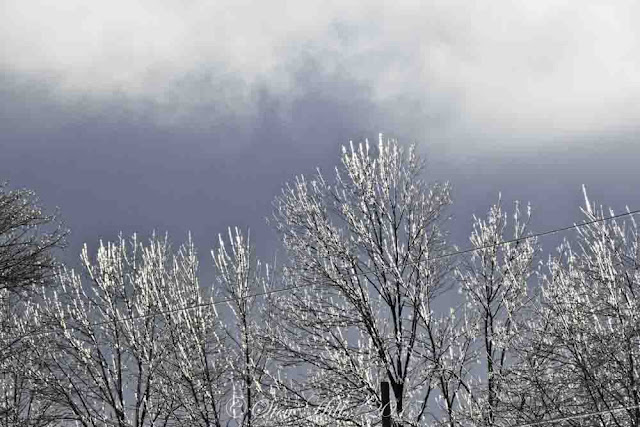 The sparkle didn't last long, and the entire evidence of the ice storm melted away, but it was pretty while it lasted.. 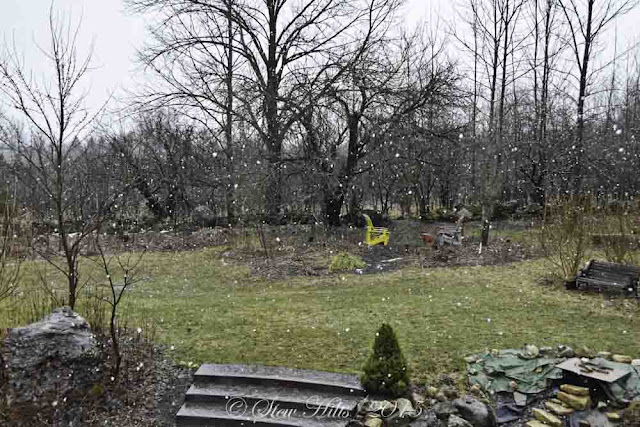 After a beautiful warm sunny Sunday, we woke today to a saturated landscape after nearly 12 hours of heavy rain overnight.  I couldn't get a picture showing the rain itself, but about 10 a.m. it suddenly changed to snow.  Here the snowflakes begin! 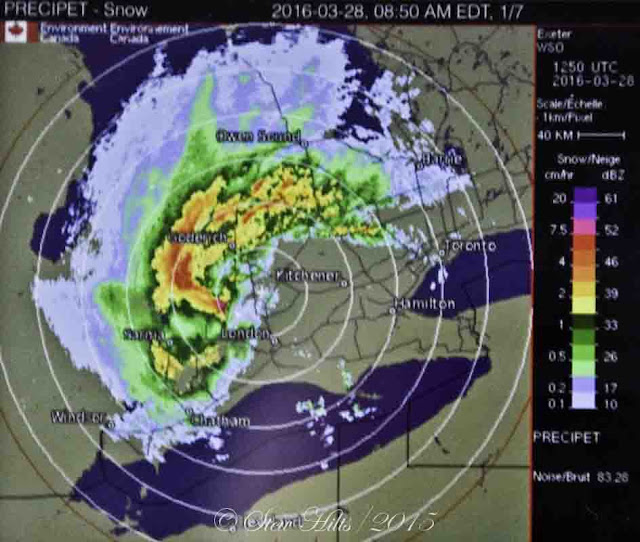 Sorry this is so blurry; did a poor job on this one.  But I have never seen such a large intense rainstorm approaching us from the west, and most of it is already past and moving east toward Quebec!  We're just beyond the northeast end of the yellow on this radar image, and it looked like it was all moving toward us!  Luckily, at this point it changed to snow. 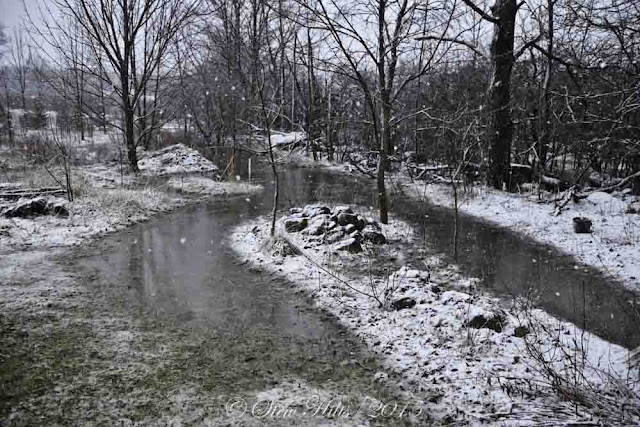 I couldn't get a picture of the rain falling, but I did notice that there was some water pooling at the far edge of the yard.  I walked outside, looked around the shed, and there it was - all the rain, forming a flood in the low part of our yard. 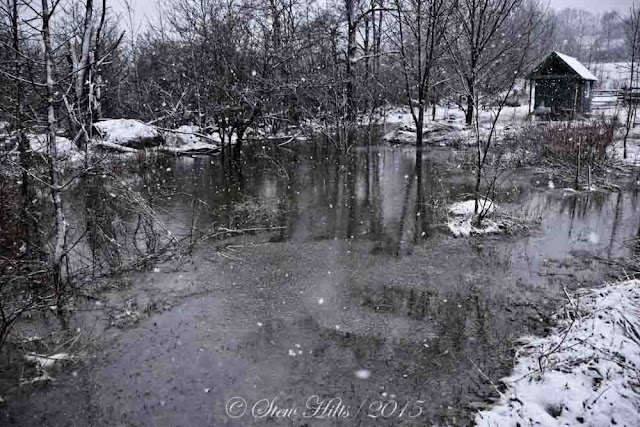 In fact, it had formed a good sized lake - never in all the years we've been here have we had any flooded pool of water like this, and this was from just one overnight storm.   It'll be a long time til I'm mowing the path that crosses the picture straight toward us! 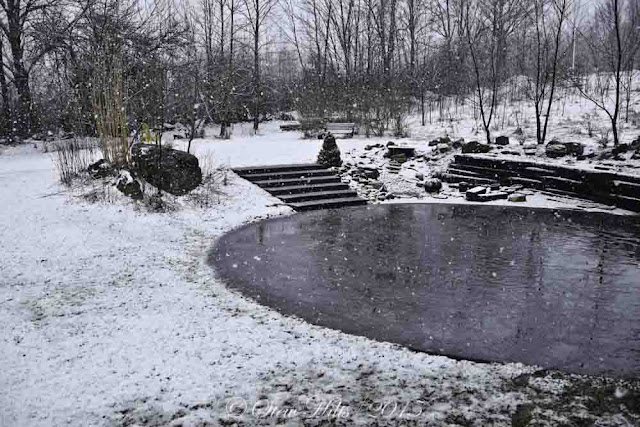 We do have a drainage challenge here, as our house was built with a depression outside the back door, in order to give us walk-out basement doors.  So we had an underground drain installed from here out to the low point in the yard.  When they put in the new patio, they extended the drain all around the semi-circular edge.  I feared that it wouldn't be enough to take away all the water from this storm! 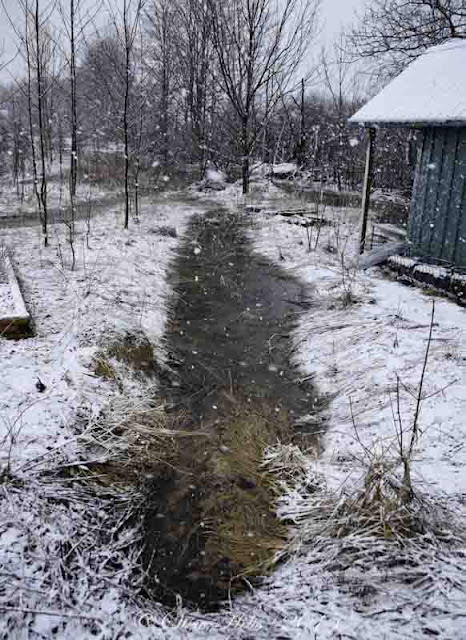 But it worked fine.  This is the ditch where the drain exits (right at my feet).  This saves the water from flooding our basement; it harmlessly floods a corner ot the yard instead. 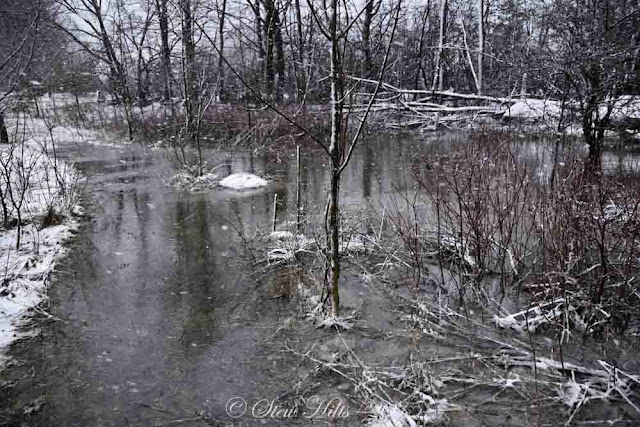 And in this storm it flooded beyond the ditch to cover quite a large corner of our yard, as well as part of the neighbour's.   We'll probably never see it this high again. 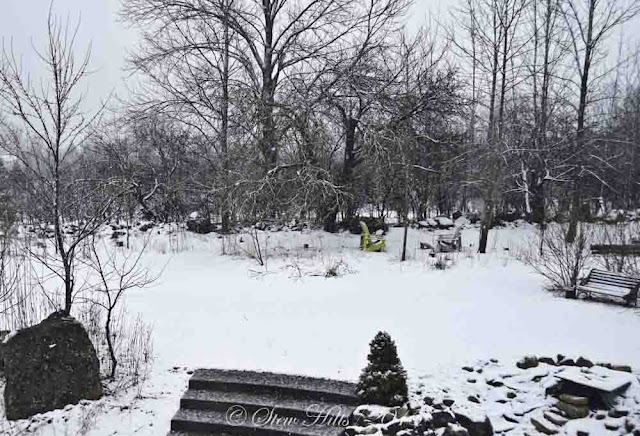 And to top off the wild weather rollercoaster, the snow continued for several hours.  The landscape is white again.  Except for the extremes this year, actually pretty typical late March weather here.  March is definitely going out like a lion!