Moss and Logs and Such

I kept walking through the woodlot, checking the trail, but also keeping my eyes open for other interesting subjects to photograph.  I found several - surprising the bits of colour you find in the early December woods. 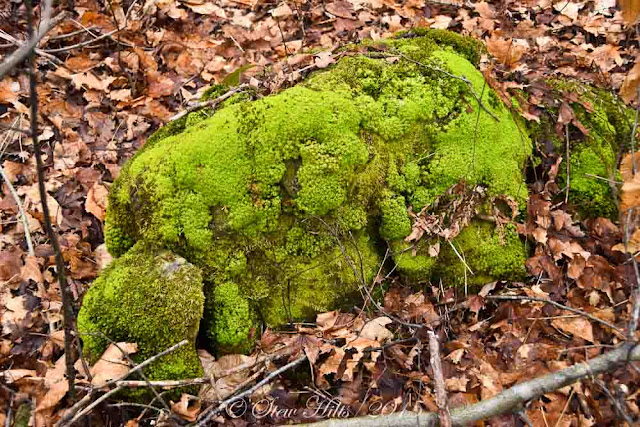 The moss on this rock was almost fluorescent!  The more types of moss I see the more I'd like to learn to identify them. 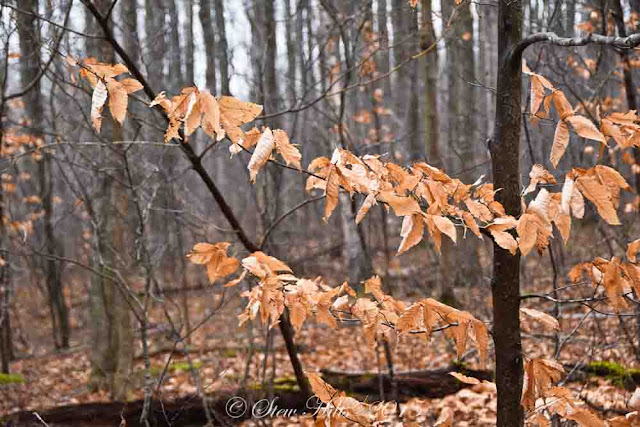 And of course there were light brown papery leaves on the Beech saplings, though the rest of the forest was bare. 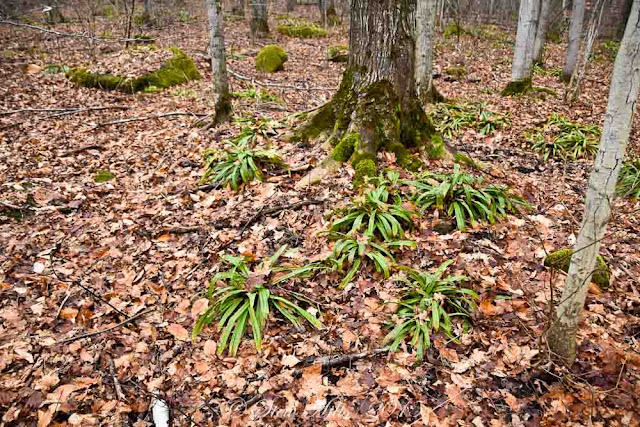 In one corner of the woods there were a lot of these green plants that look like a wide-bladed grass.  But I know this as the Broad-leaved Wood Sedge. 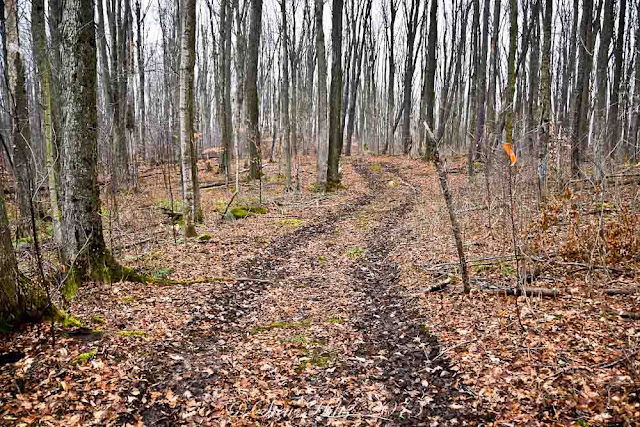 They had cleared the first 2/3 of the trail I had blazed, and I thought it was looking really good.  But the far end became a little bumpier, so the next day I went back and met Jess, the Farm Manager, and walked the trail again.  Going back and forth several times, we selected a somewhat shorter but much smoother route out of the woods at the back.  Jess is both in charge of clearing the trail, and helps with the riding on the trail, so she knows exactly what's needed.  I think the trail project is going to end up quite successful.  Now I just need to do a map for them.  It's hard to believe that there was no evidence of this track in the woods at all just 3 months ago! 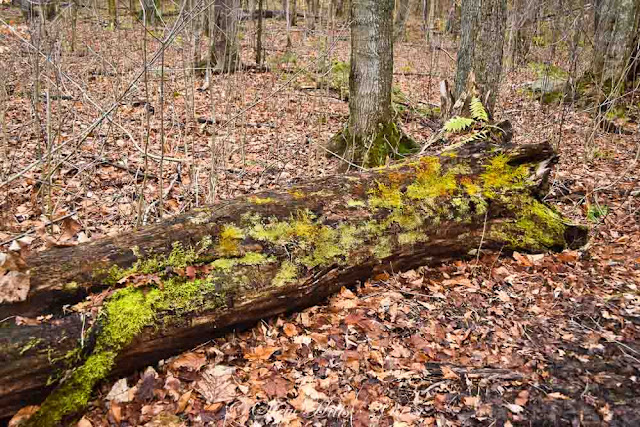 The most interesting bits of colour along the way were a couple of big fallen logs, decorated with various mosses. 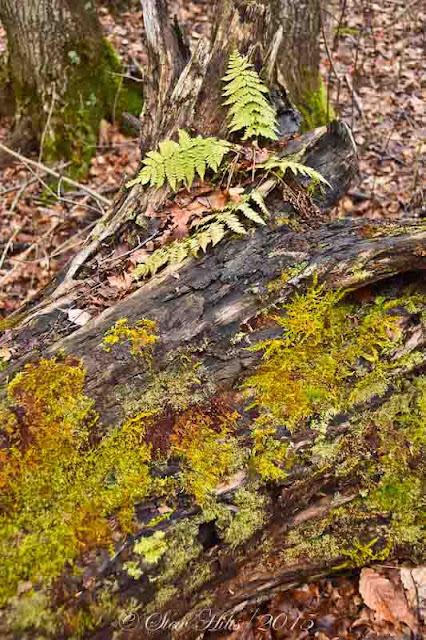 There are probably 3 or 4 different species just on this log alone, as well as that little woodfern. 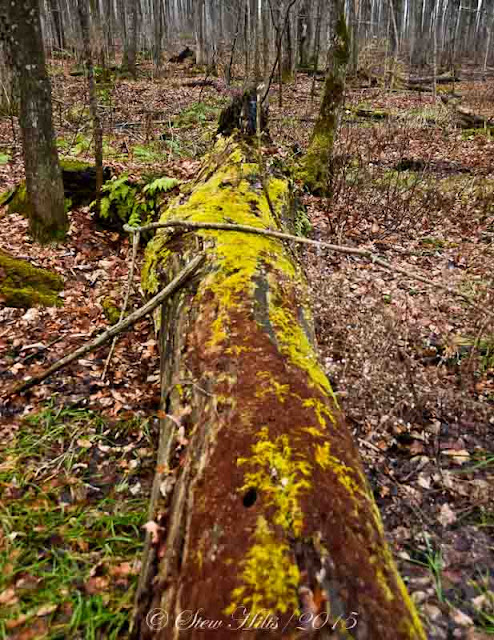 This log was covered in a reddish brown moss that formed the background, with bright yellow-green moss spreading on top of it. 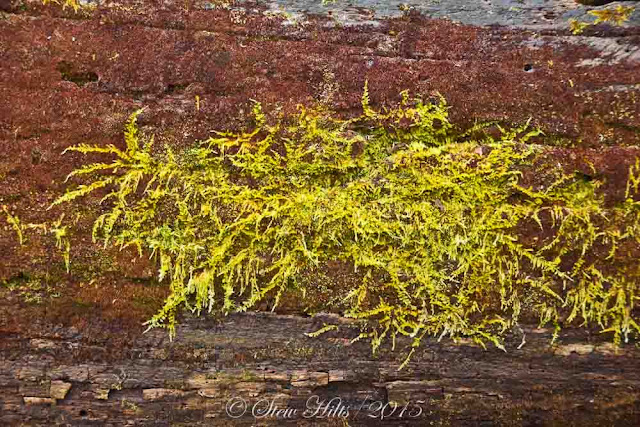 I should be able to figure out this moss, with its unique long feathery tendrils crawling across the log, but I can't.  Any botanists out there? 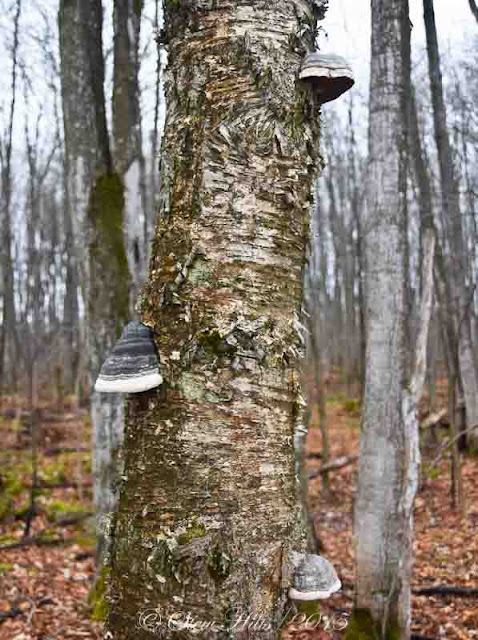 The woods is mostly Sugar Maple and Black Cherry, but there are a few Beech trees, this one dying and decorated with the upside-down shelves of Hoof Fungus. 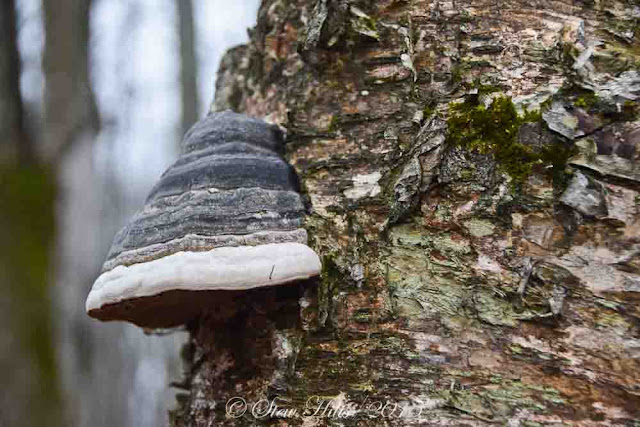 This is the fungus also known as Ice-Man Fungus, or Tinder Fungus, because Otzi, the 5300 year-old Ice-Man found in the Otztal Alps between Austria and Italy in 1991, was carrying several pieces of it, apparently as tinder for starting fires.  Tomorrow - some old farm fences in the woods

A stay at home day, trying to tidy the mess that is my 'office', but a beautiful day outside, with a spectacular sunrise, and heavy frost.  And yes, I got pictures.

Walking time with dog = 1 hour.  Total walking for the week = 9.5 hours, average 1.35 hours/day.  I didn't keep track the previous week exactly, but I know I exceeded my target that week too, because I spent 7 hours just on 3 hikes, + the daily dog walks.  I should say the dog walks have also changed this fall from a leisurely saunter to a 'brisk' walk!  So far, success!