Until today, when we have an inch of two of snow (which won't last long because the temperature is rising all week!), the dominant impression of the last two months has been 'shades of brown'.  Apart from the trees and sky, which are usually grey, the fields, the meadow and the garden are all brown - many 'shades of brown'.  So again, in the interests of documenting this late fall season accurately, here are some pictures from our garden last week, just after a rain I think. 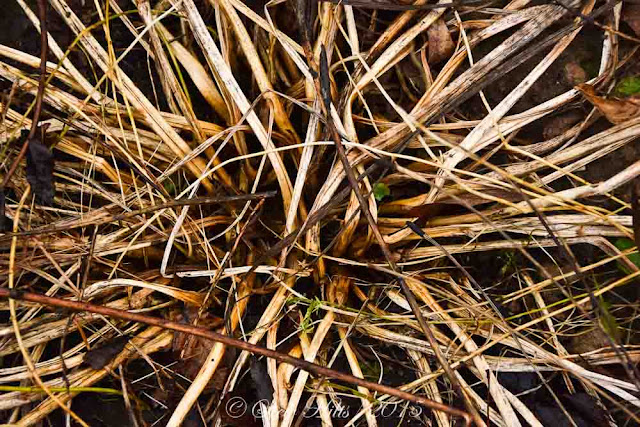 Day Lilies leaves look pretty bedraggled by now, though they tend to fall in an interesting somewhat symmetrical pattern. 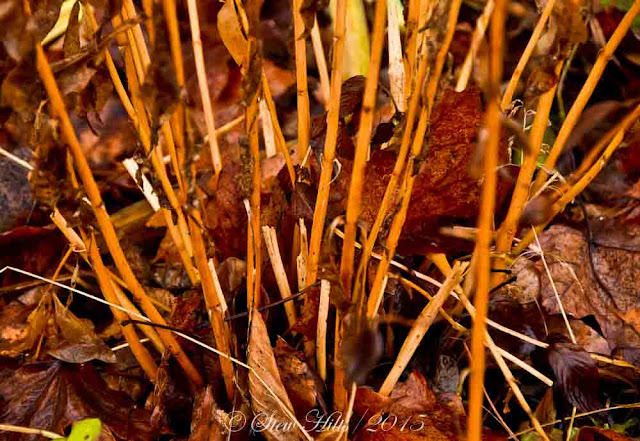 A number of plants with somewhat woodier stems stay standing upright.  Though I couldn't tell you what this one is, it's a nice warm golden brown colour. 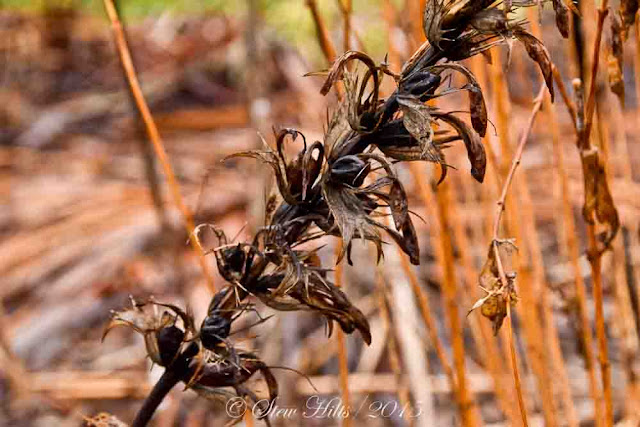 Many plants are now just a dull brown, like this stem of Bear's Breeches. 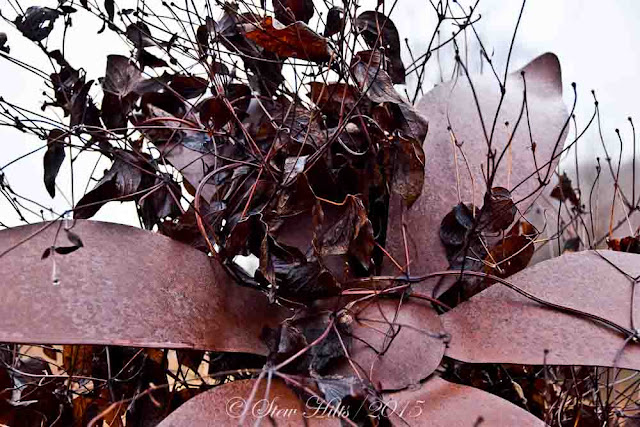 And a few, like this Clematis, are really dark brown, though it's set off by the rusty brown of our big flower, usually invisible behind all the luxurious growth of the Clematis. 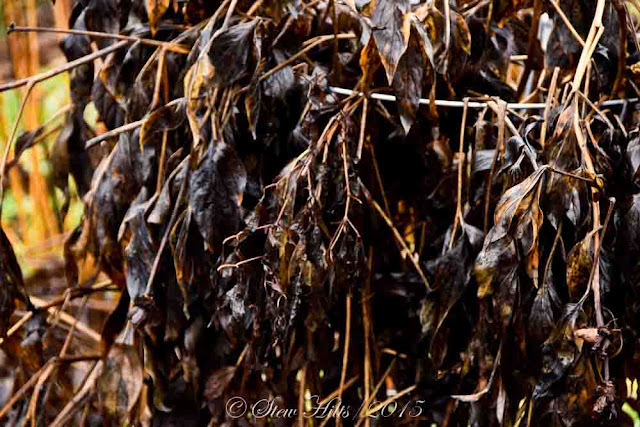 And the very sad Peony leaves are almost black, looking rather dripping and drenched here, hanging over the plant ring that tries to keep them in control in the summer. 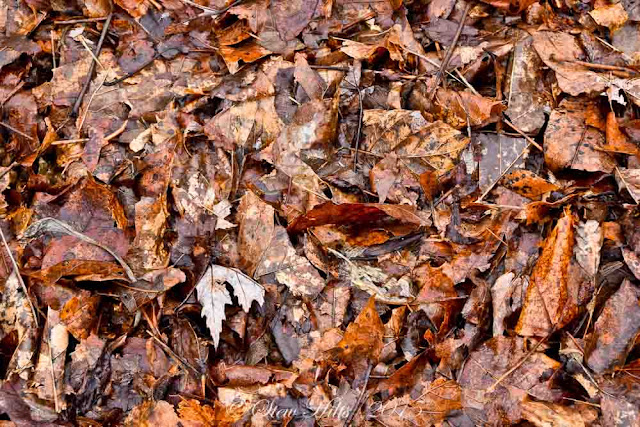 On the other hand, most leaves are a nice bright variety of brown colours, here lying on the veggie beds as mulch. 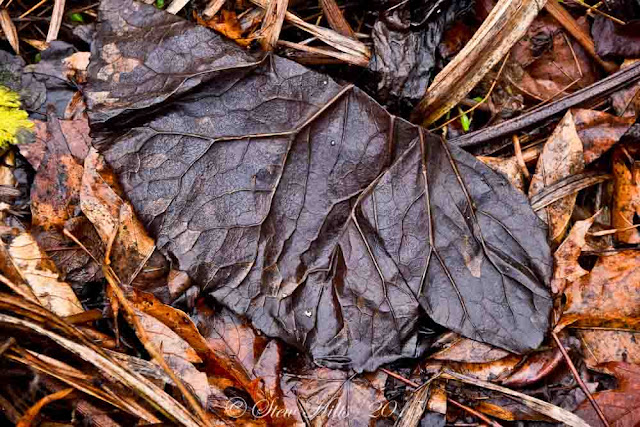 But a few, like this big Ligularia leaf, are very dark, again almost black. 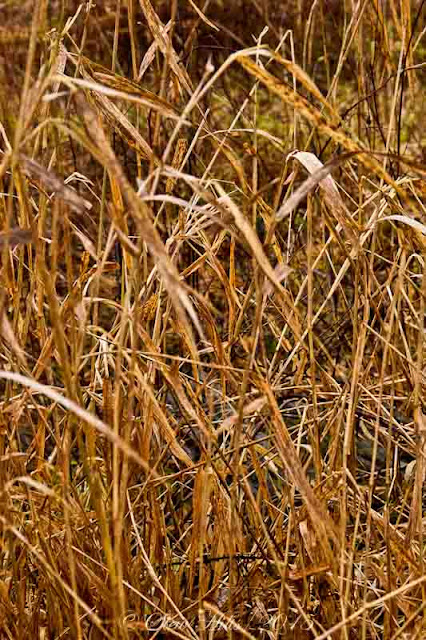 In contrast, the grasses in the meadow are light brown, 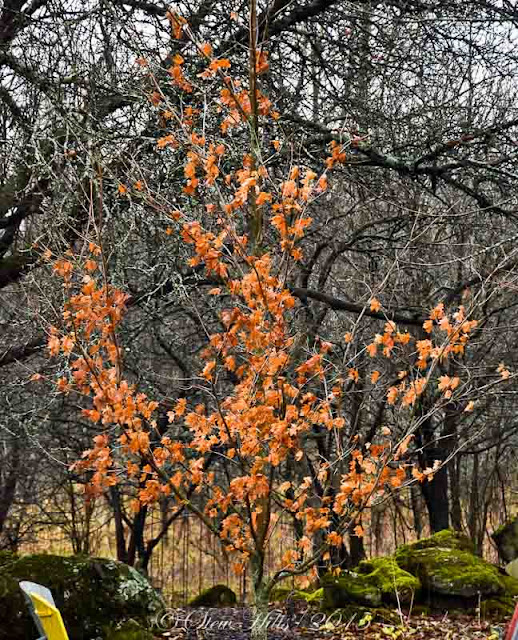 and the leaves on this Sugar Maple sapling (that I planted as a 12" stem 15 years ago), are almost orange. 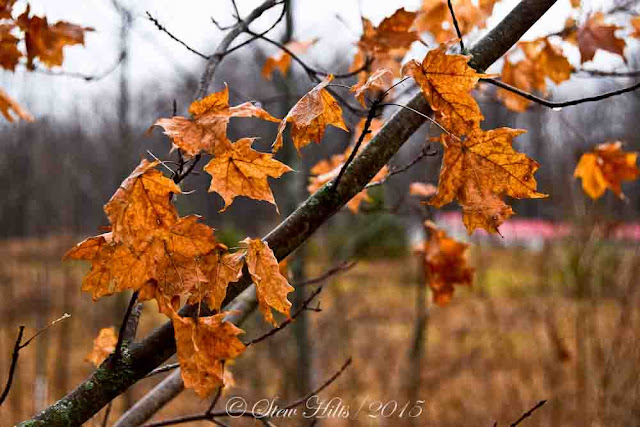 The nicest brown of the bunch, I'd say. 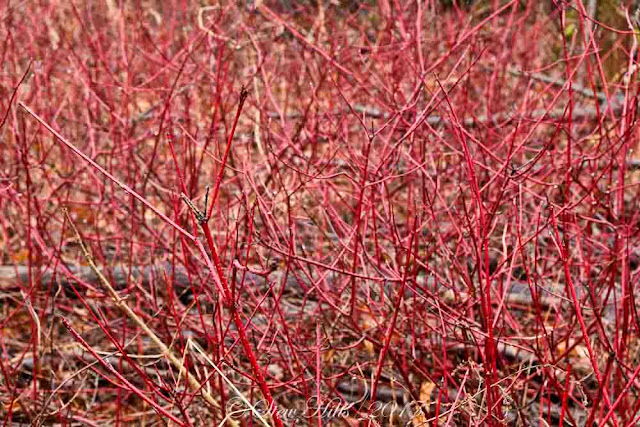 And it really wouldn't be fair not to point out the Red Osier Dogwood, which tries hard to brighten this otherwise dreary landscape with it's bright red stems down in the low spots.  Not very exciting pictures, but an accurate reflection of the seasons here in the valley!

We suddenly have a very different looking whitish landscape today, though as I said, it's not going to last long.  We came home last night to snow, and I graciously hopped out of the car to shovel a path to the door for my wife - we hadn't worn boots, coming from the snowless south.  Two scrapes of the shovel I had left standing by the door (well-prepared as I am), and the handle snapped right off!  So had to pick up a nice new fancy shovel today after church.

After lunch I headed out to get some pictures.  A geocache I helped create had gone missing, so I went out and replaced it, and got in a nice walk too.  And a bit of a drive round the countryside, snapping pictures of barns, so I can share some slightly wintry pictures for at least the next few days.  I managed to walk for just over an hour, which brings my total for the week to 7 hours and 10 minutes - just scraped by, but on average I made it to one hour, 1 minute and 30 seconds or thereabouts, per day.