Picking up our hike where we left it yesterday, we were now on the high bedrock plateau of Loree Forest.  In spite of the steep ravines we had traversed to get here, and the very steep slopes to the north where Georgian Peaks Ski Club is found, the trail on top is relatively flat the entire way around the area. 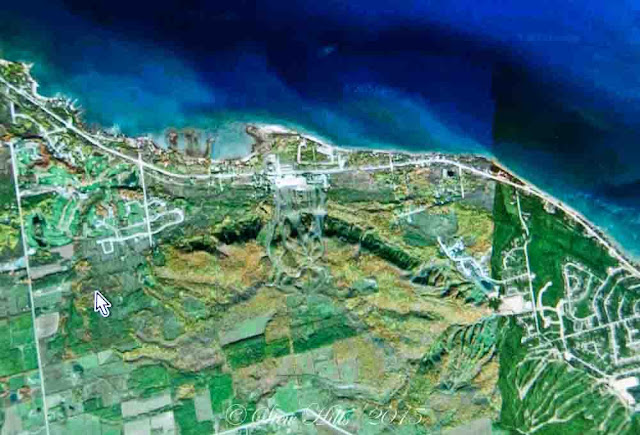 Have I told you that I like maps, especially satellite views?  They don't always turn out well, but the Google Maps view of this area is great, because it was taken in the fall so there's some fall colours.  This shows an overall view of the Loree Forest, with the steep darker slopes to the north, and Georgian Bay beyond, just to show you the context.  You can see the slopes of several Ski Clubs, including Georgian Peaks by itself, in the centre of the picture. 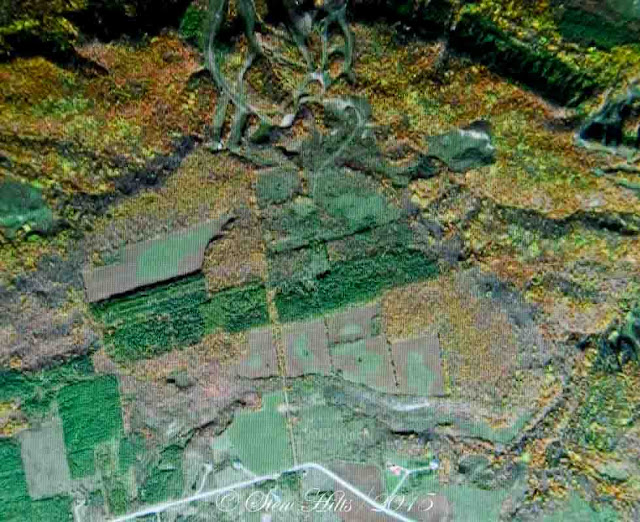 A closer view shows the flat plateau in the middle of the forest, partly farmland, partly reforested conifers, and partly deciduous forest.  We hiked from just left of the lower right corner through the ravines, up the hill, around the outer edge of the plateau where the trail is relatively flat, and down to the farm on the lower left corner.  Take note of those ski slopes heading north. 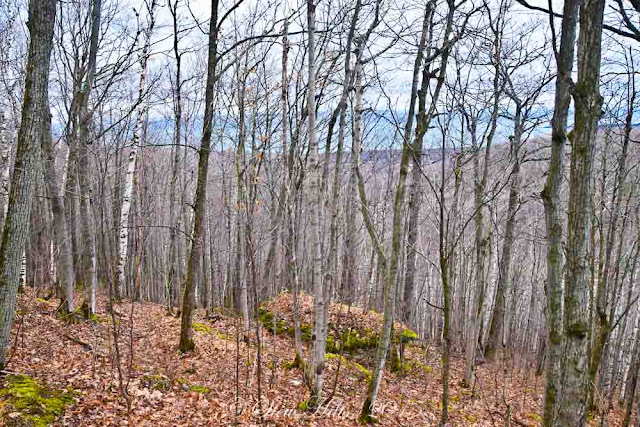 Just after we reached the plateau we started seeing Georgian Bay off through the trees.  Except for late fall and winter, you would have no view of the bay at all here, so again I think what a nice time of year this is for hiking (and no bugs either). 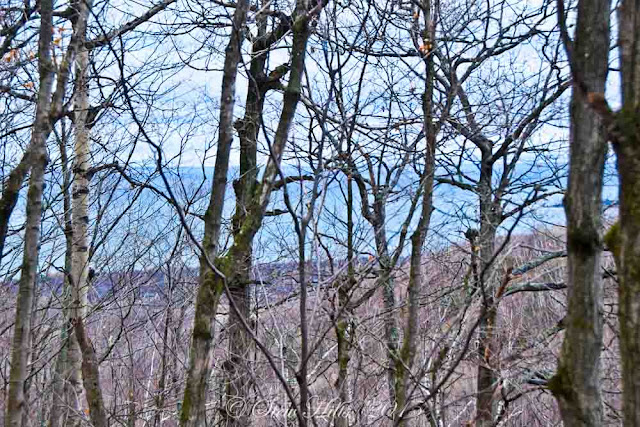 There were no open viewpoints, but the blue through the trees was nice. 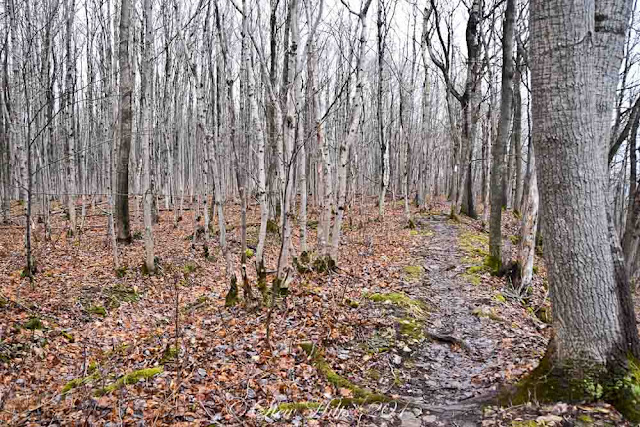 The forest on top is relatively young, obviously having been cleared and farmed in the past.  The trail goes right along the edge of the bluff. 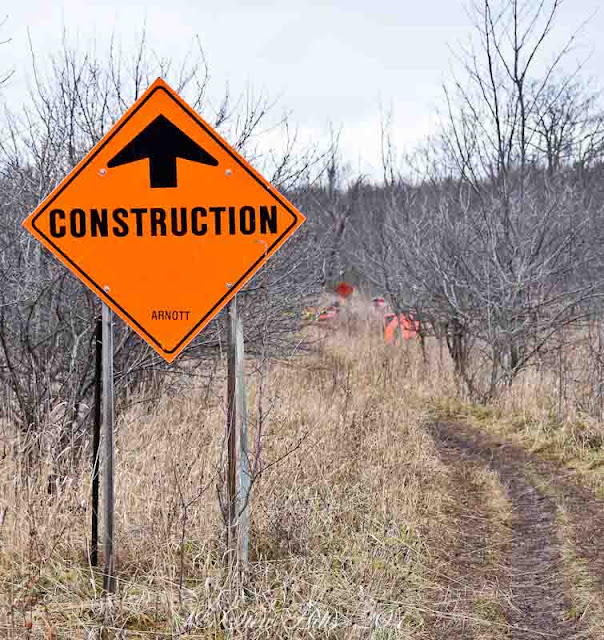 And for the first time in my life we came across a 'Construction!' sign on a hiking trail!  This was just above those ski runs of Georgian Peaks Ski Club, and the sign warned of an actual temporary road with dump trucks labouring by across the trail. 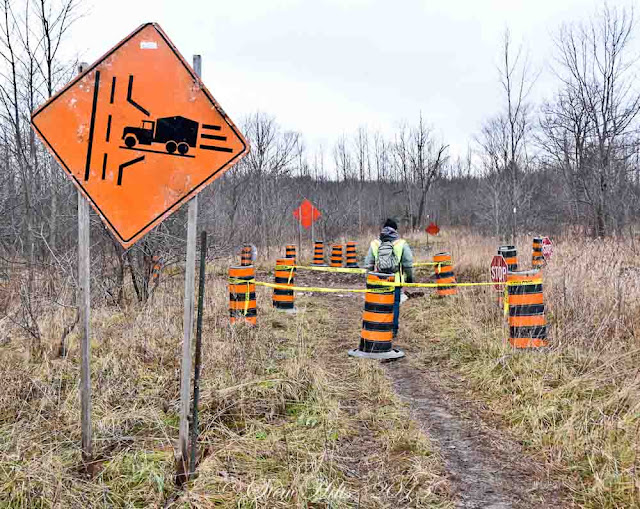 It turns out there had been a major landslide on a ski slope, and the engineers were racing to fix it and restore the slope in time for ski season.  Although the ski season is going to be late, they've been blessed with great weather for this effort! 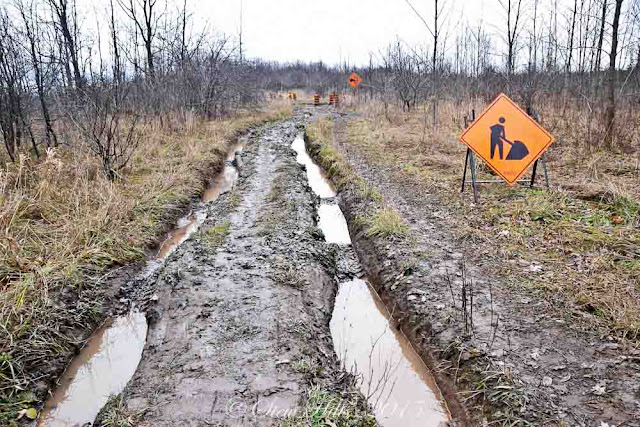 Beyond this we had to trudge through this badly rutted section of trail where a local company takes 'adventure tours' in a hummer.  I'm not impressed personally.

This entire upper plateau is public land, acquired for an ambitious hydro project long ago.  Believe it or not, the plan was to pump water from Georgian Bay up onto the plateau, creating an artificial lake.  The pumping would occur during hours of low demand for hydro, and then the water would be allowed to run downhill again during hours of high demand, with a generating station at the bottom.  Because of the high height of the land (260 metres or 850 feet), a lot of hydro could be generated for the amount of water used.  That would have created the highest 'head' for a hydro plant anywhere in Canada.  For whatever reason, that never happened, and the land was transferred to the Ministry of Natural Resources and Forestry.  Now it's widely used for hiking, biking, cross-country skiing, (and hummer tours). 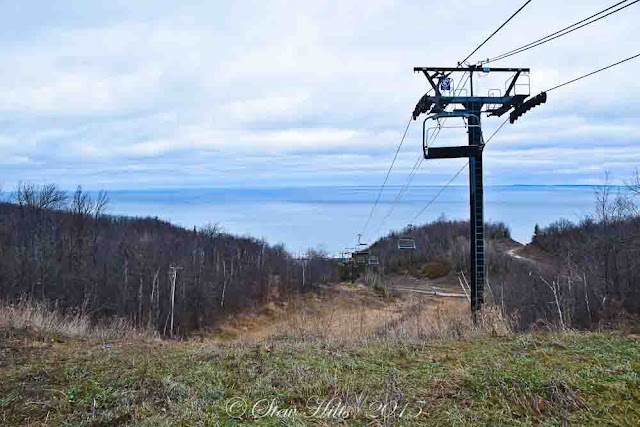 After that for a very brief stretch we came out to the top of Georgian Peaks, and one of the chairlifts.  Here you do get a great view out over Georgian Bay. 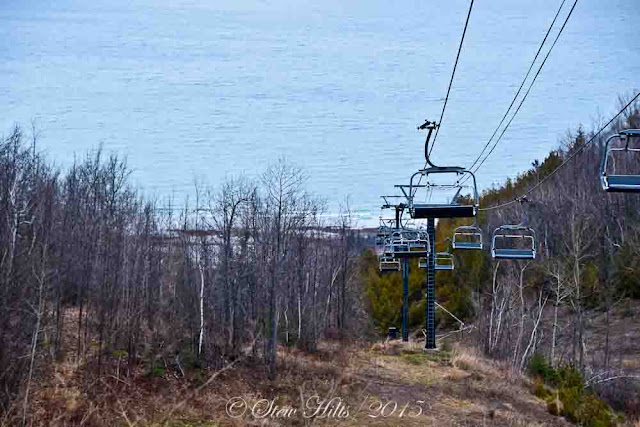 Looking downhill through the trees I could see and hear the waves rolling in off the bay and crashing on the shoreline. 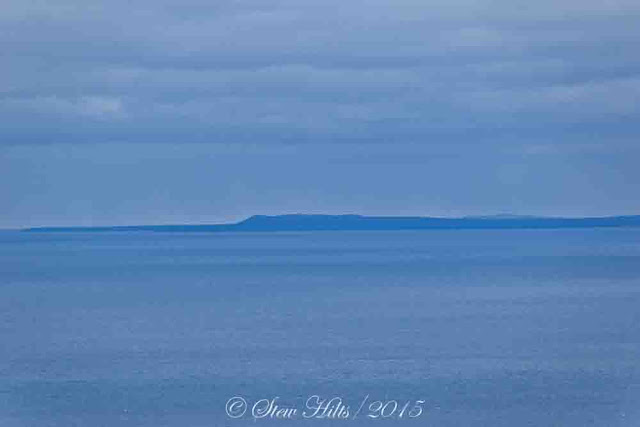 I'm fascinated with the distant views of islands on the far side of the bay, about a 40 mile view.  After checking maps, I think this is actually two islands, the lower one being Christian Island, and the higher bluff being on Giant's Tomb Island, which is actually behind Christian Island. 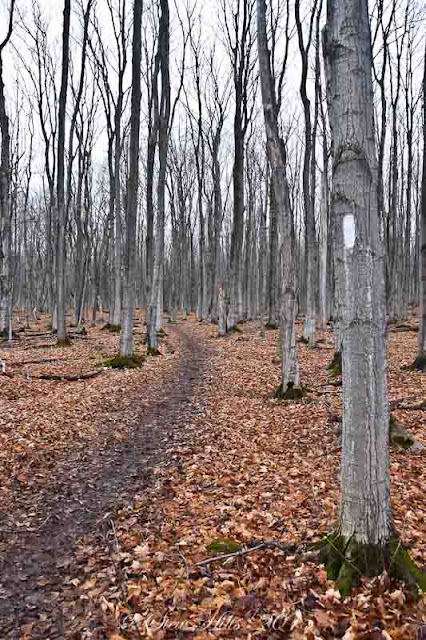 It was one of the longest hikes I've done since finishing the cardio program; hopefully it was good for my heart, as well as being fascinating!

We had a dusting of snow overnight, and did have below freezing temperatures til after about 9 a.m., but it disappeared fast.  Today was Gingerbread Cookie Day in our house.  I have to admit that not much baking gets done here, but this is a Christmas tradition that can't be missed.  And I had the loyal task of being the official taster. 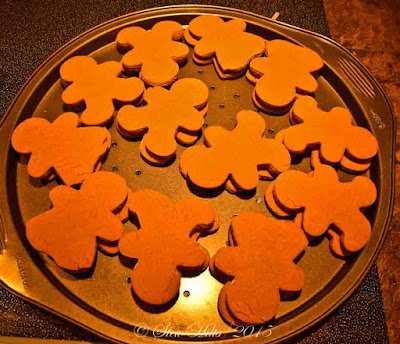 I pronounced them perfect!