After seeing the old hydro plant ruins that I described yesterday, we headed on down the trail and up a very steep big hill.  We hadn't seen the actual river for awhile, but now we were on top of a very tall steep bank on a path lined with White Birch trees and could see the river through the trees. 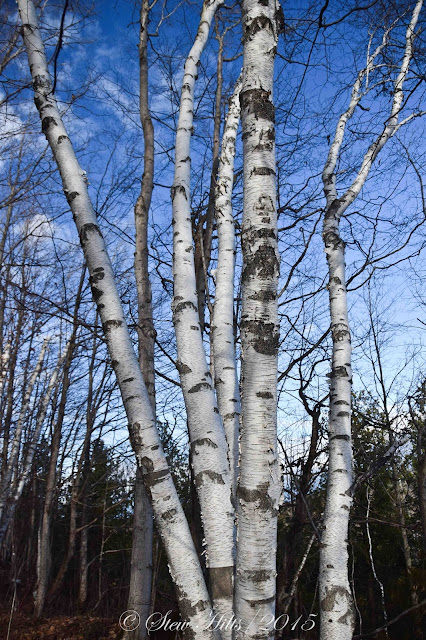 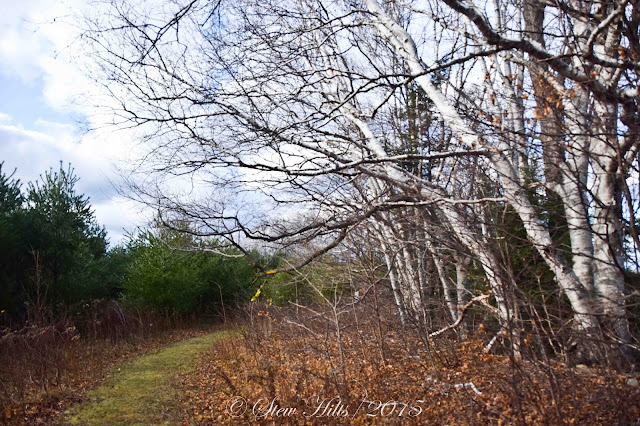 Off to the right through the trees we began seeing the river.  We were a long way above it! 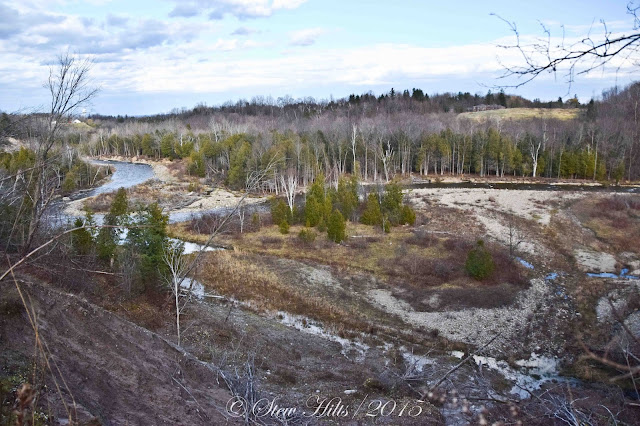 And this view we came out to is the site of the Bighead River Earthcache.  An earthcache is a site that a geocacher needs to visit and answer set questions, usually about the geology of what you're seeing.  Here there has been a major landslide down the clay slope in the immediate foreground (just a few weeks ago), and the river channel is on the far side of the valley.  You can see what looks like an old river channel coming toward us across the bare gravel on the right, and passing to the left at the bottom of the slope. 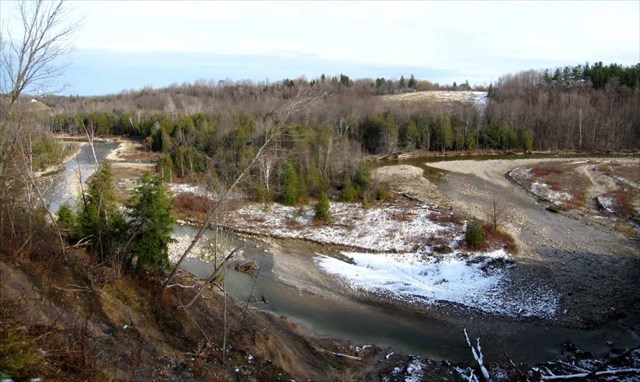 Look at the contrast with this view taken by another geocacher, in 2011!  There's a significant channel doming toward us on the right, and passing to the left at the bottom of the slope in the immediate foreground.  What a change in 3 years!  At some point the river has broken through the clump of trees on the left, leaving the main channel on the far side.  Full credit to 'Maxter86' for the photo. 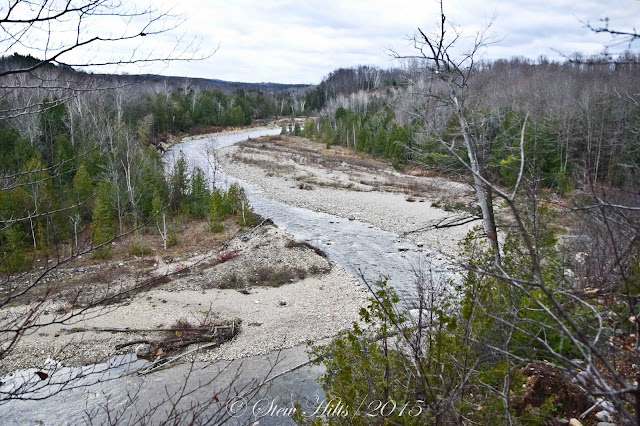 As we moved on down the river valley, we got a number of interesting further views of the river.  At this point the river was cutting through the Georgian Bay Formation, the same geological layer that forms the Claybanks which I described a few weeks ago. 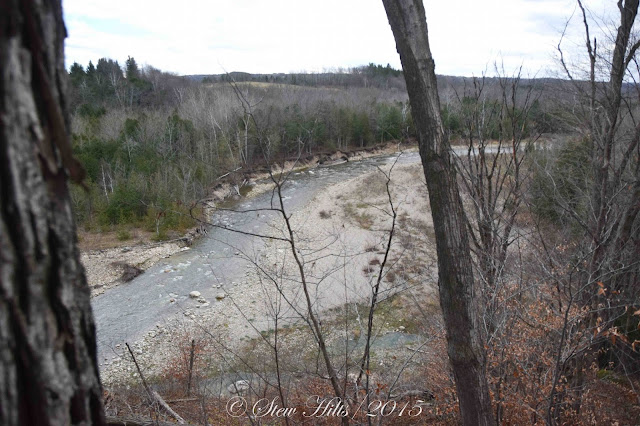 We started looking at the river from the viewpoint of canoeing or kayaking down it. 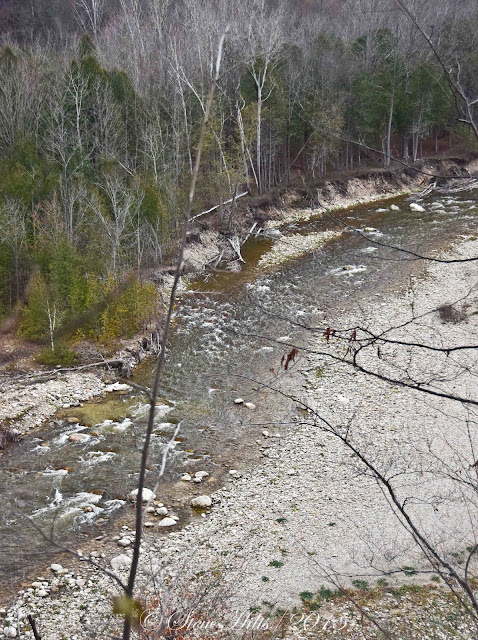 But if you took a close look, it appears this would be impossible.  Just two many rocks and shallow spots, with fast current in between.  You'd be bouncing from rock to rock trying to kayak down here. 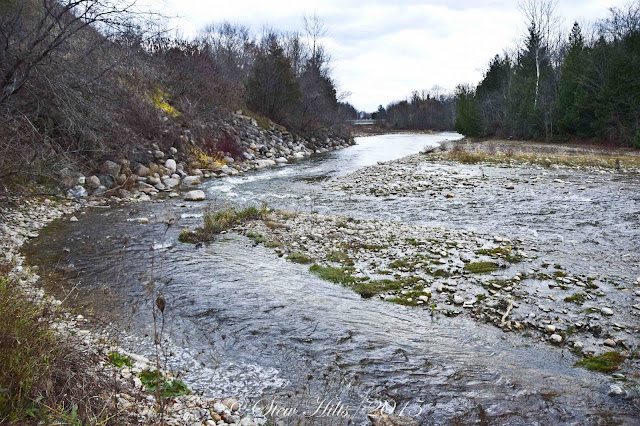 By this time we were back down at the level of the river, and got a good look at the currents.  Here the main current is not the one in the foreground, but the one further back on the right. 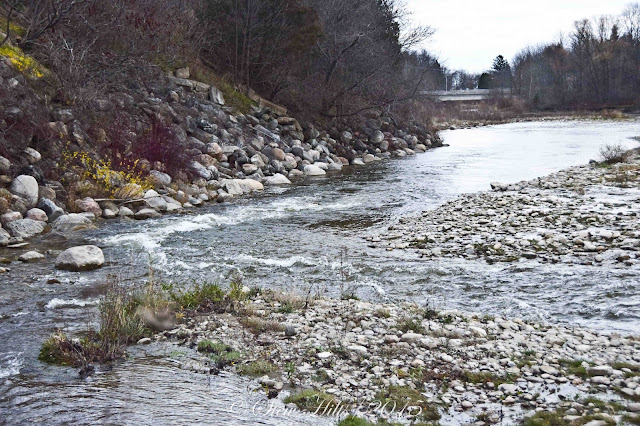 But we quickly decided that this corner would be deadly!  You'd go over so fast in a canoe or kayak trying to make that bend in a fast current, you wouldn't have a chance.  And there in the distance is the first bridge we came to, as you enter the town of Meaford and the end of our hike.

Walking time with dog = 30 minutes.  Hiking time on trail = 2 1/4 hours (hiking a long section of the Bruce Trail with a friend).