Last week I enjoyed another hike with a friend up in the farthest northeast corner of the valley, around the Loree Forest.  This is a popular big loop trail, though we added a bit to start further east and walk a little further west when we finished. 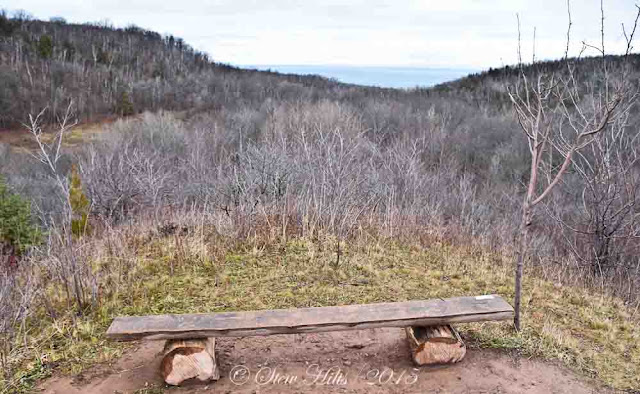 There's a beautiful lookout here, on a narrow 'hog's back' ridge in between two steep-sided ravines.  All this lower ground is composed of the Queenston Shale, which erodes easily forming these ravines, in this case providing a view out to Georgian Bay. 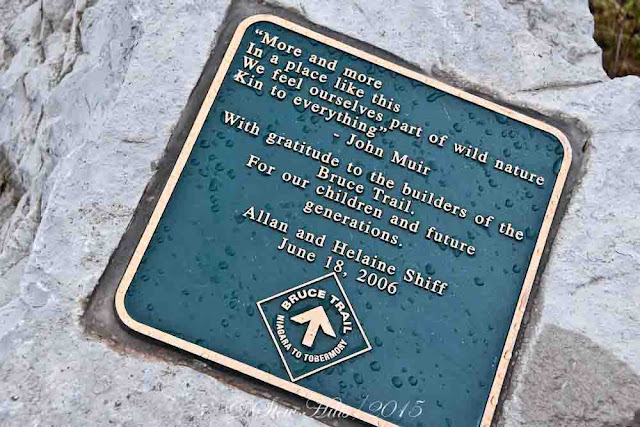 The Shiff's obviously gave a significant donation when this property was purchased, but I liked the great quote from John Muir they chose to have put on this plaque, affixed to a big boulder beside the lookout. 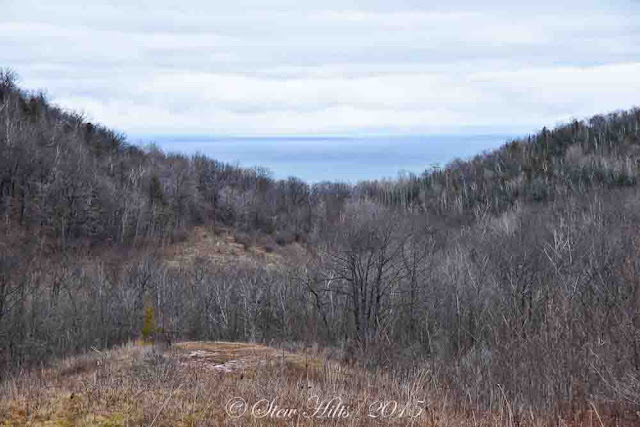 A little further along another ridge, and another view down over the ravines to Georgian Bay.  You can really see how grey the leafless late fall forest looks, but Georgian Bay is still at least somewhat blue on this dull day. 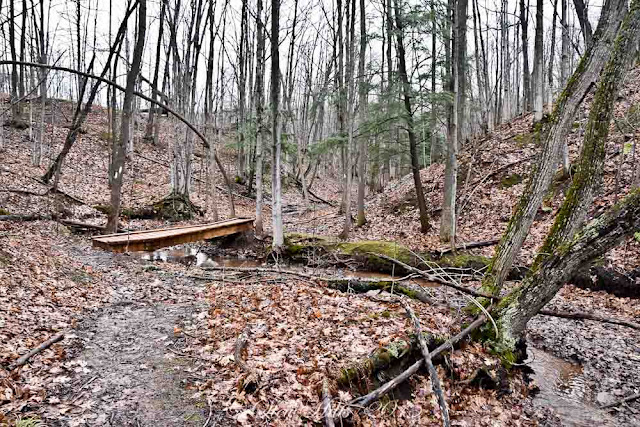 The trail heads down across one of the ravines, and crosses a small stream on this bridge.  See the white blazes, two by the bridge and one further back? 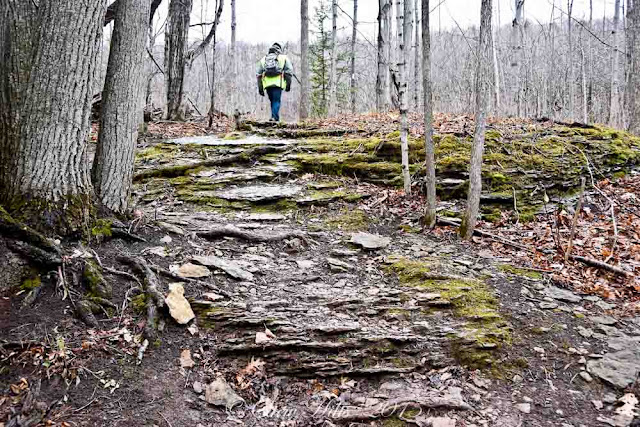 Up the other side we walked over exposed layers of the Manitoulin Formation, a hard ldolostone that forms very thin horizontal layers. 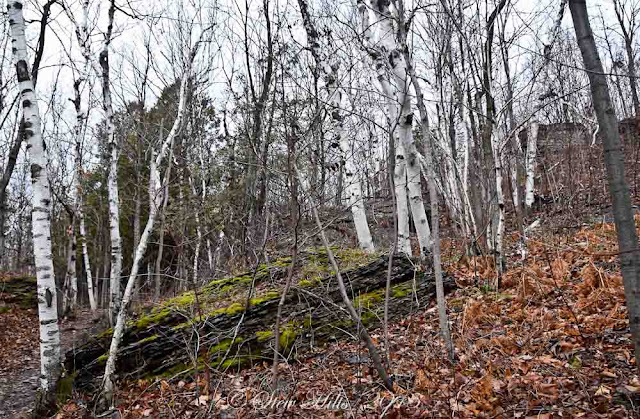 And beyond that the trail climbs a very steep hill up out of the valley onto the top of the escarpment here.  Along the way we passed some huge slabs of Manitoulin dolostone that had broken off and slid down the slope. 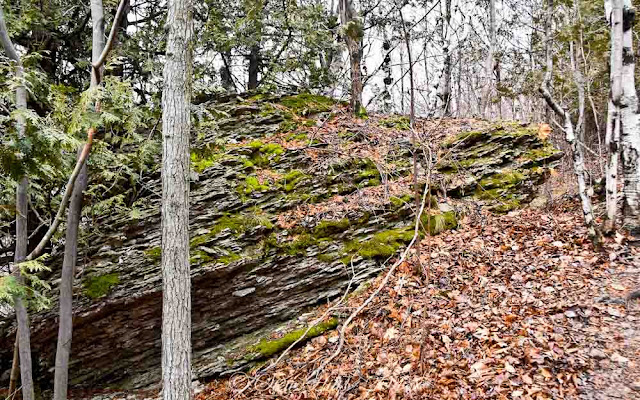 This big chunk shows both the thin layers of the formation and what geologists would call 'cambering' - that is, it is a piece of bedrock that has broken off and slid down the hill, and now rests on an angle. 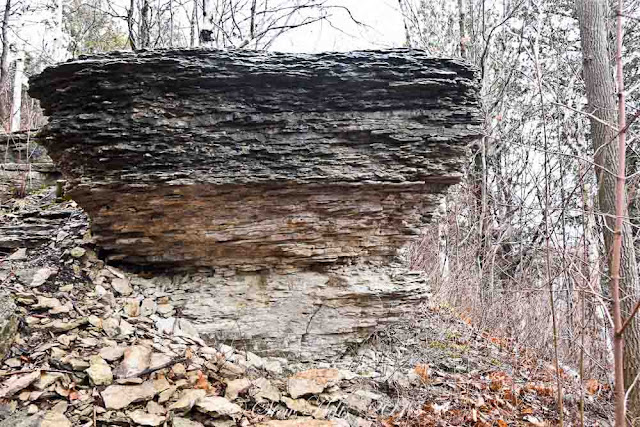 In contrast, this chunk of bedrock is still in place, the layers quite eroded, but still attached to the short escarpment at the top of the hill.  I could easily understand how a piece like this could come loose and slide down the hill.  I'm guessing that 90% of the 'erosion' is actually frost action.  Water gets in the cracks and freezes during winter, expands, and breaks off little bits of rock.  That's what would eventually loosen it too. 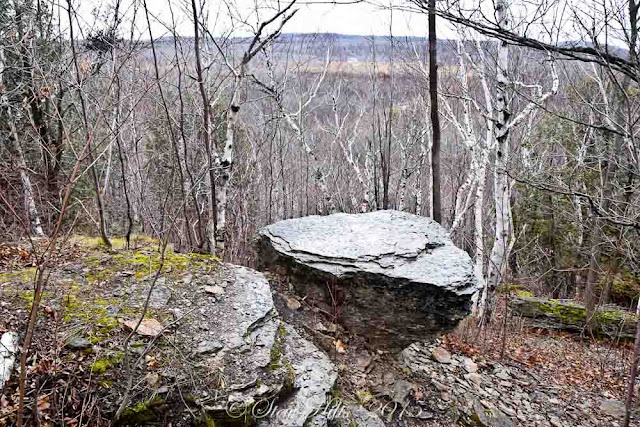 Right up at the top we emerged onto the flat surface of the Loree Forest, the top of the Manitoulin Formation where we could look back down over the valley we had climbed out of.  This piece of rock was already looking like a small geological 'flowerpot' .  Tomorrow, the rest of the hike.

A good hour and a half walk with a friend today on his 50 acres, as well as half an hour with the dog.  But most of the day was a fine drizzly rain, another dark and gloomy late fall day.  I'm approaching 3 blogging milestone for me that you might not even notice.  I had my 10,000th comment just the other day, and I'm  coming up to 200,000 'pageviews' according to Blogger.  And sometime in January I'll do my 1000th post.  Not much compared to some of you, but it amazes me how much you all support me, and how much I enjoy doing this.  Take care.