An Unknown Bit of Local History

Ten days ago we hiked down the Trout Hollow Trail, and got an interesting look at the long-abandoned Hydro dam and generating station just south of Meaford.  Following both sides of the Bighead River, this trail passes the spot where the great conservationist John Muir worked at a sawmill for a few months at some time during 1864-66, but that will have to be another story. 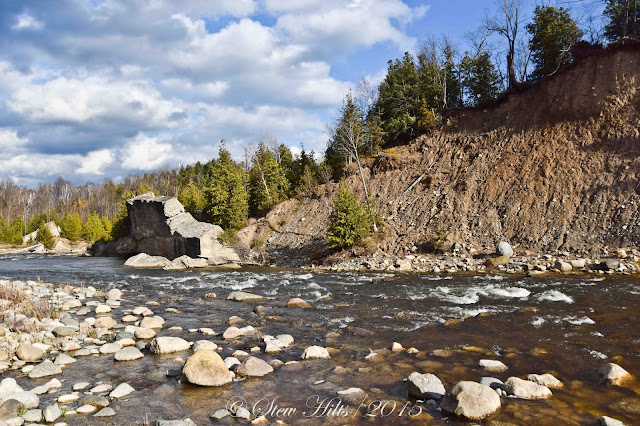 Our adventurous group of 4 buddies who meet for breakfast once a month was led by our senior statesman, who helped lay out and develop this trail, and was familiar with the story of the old hydro plant.  He was delighted to show off this little bit of local history to the rest of us!  This is part of the old dam on the far side of the river. 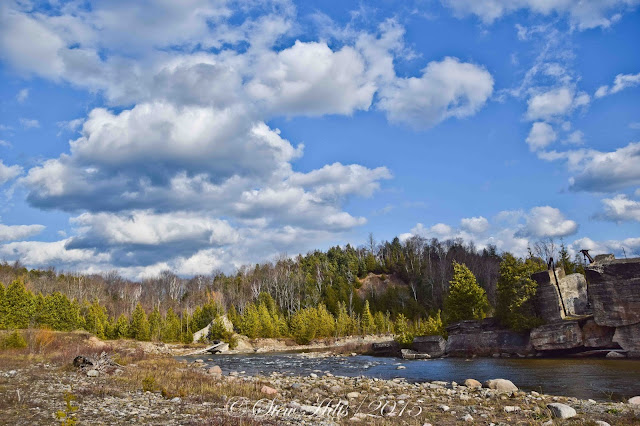 It would not be easy to piece together the story without someone showing you the pieces, and describing it all for you.  Only a little broken down evidence is left scattered through the woods.  Here you see the far side of the dam as well, where it stretched across the river. 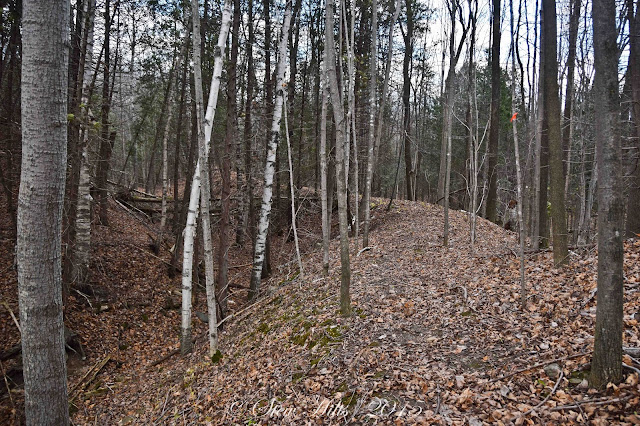 He led us into the woods instead of following the Trout Hollow Trail exactly, first along this old roadbed that was used to access the dam, built in 1904. 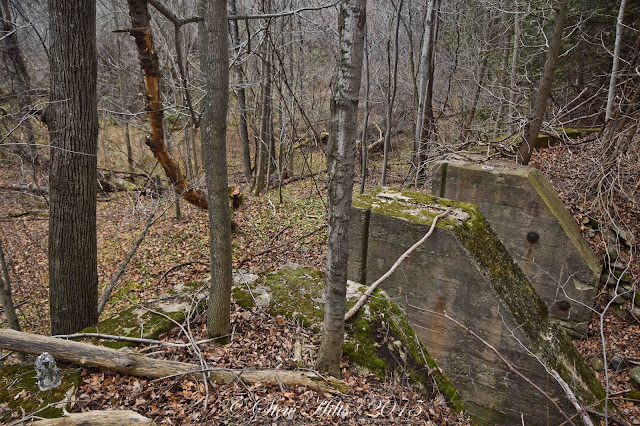 At the end of this we came upon these old concrete gates, where the water in the pond above the dam (on the left) was let out into a holding pond above the generator, downstream to the right.  It`s really hard to picture the small lake that once flooded this now-forested valley. 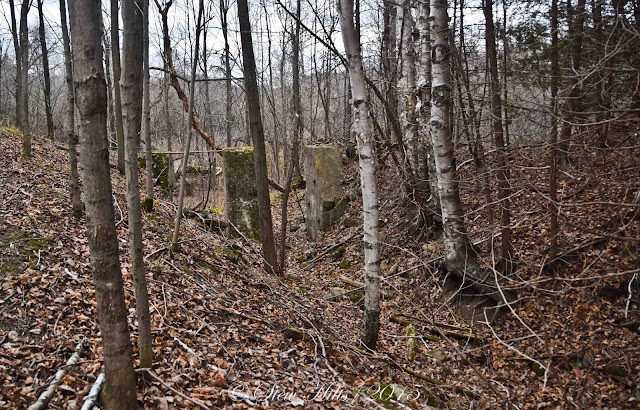 Beyond the gates, we were following this valley, which served as the holding pond - just a narrow valley in the woods, but with concrete gates at one end, and a steep narrow berm forming one side. 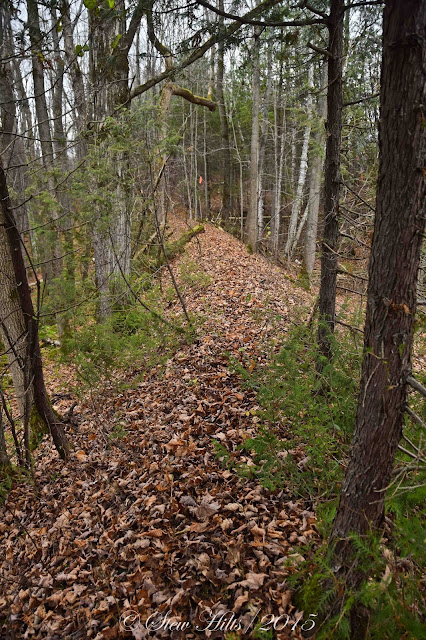 This bern was 20 feet high, and almost too narrow to walk on easily, all built by hand, presumably with horses and scrapers, over 100 years ago. 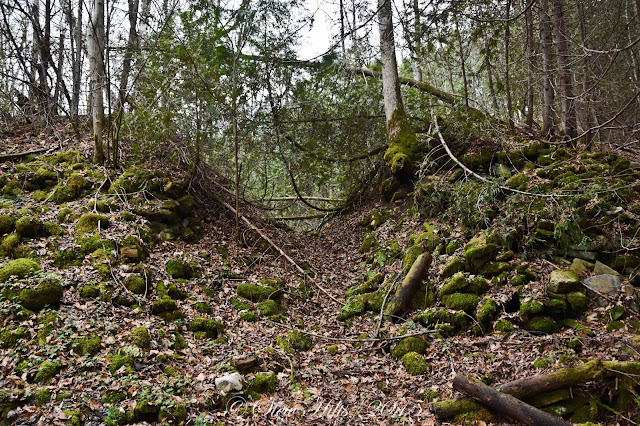 At the end of the berm a dip in the rock-reinforced slopes indicates where the pipe feeding the hydro generating station started.  The pipe was 36`in diameter, and built of wood, held together with bands of metal.  I`ve seen the similar pipes that led to the Eugenia Power Plant, until they were replaced with a metal pipe about 40 years ago.  Here, there is no evidence of the old pipe left at all. 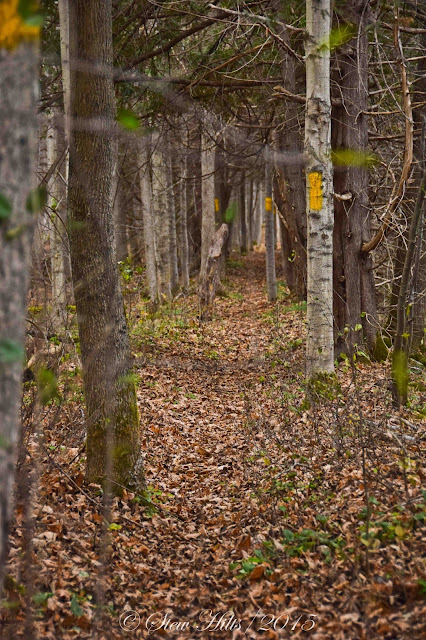 But you can certainly follow the route of the old pipeline, about 800 yards long.  It`s very close to flat, though presumably the pipe would have been supported on wooden cradles.  You certainly would not guess what you`re seeing here though unless you had someone to tell you what it was!  We`ve rejoined the main Trout Hollow Trail at this point, indicated by the yellow blazes. 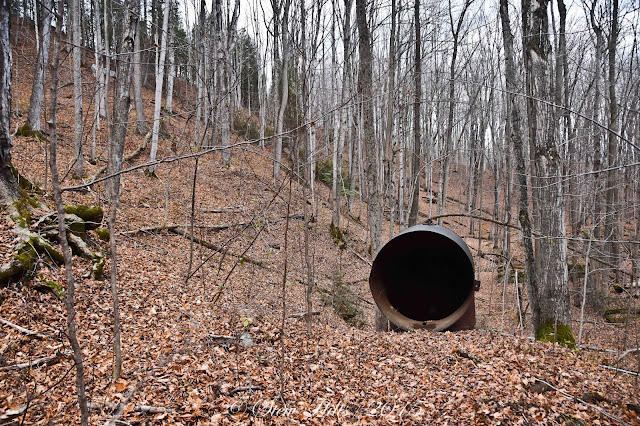 Suddenly, at the end of the pipeline route, you come upon this giant metal pipe opening in the middle of the woods! 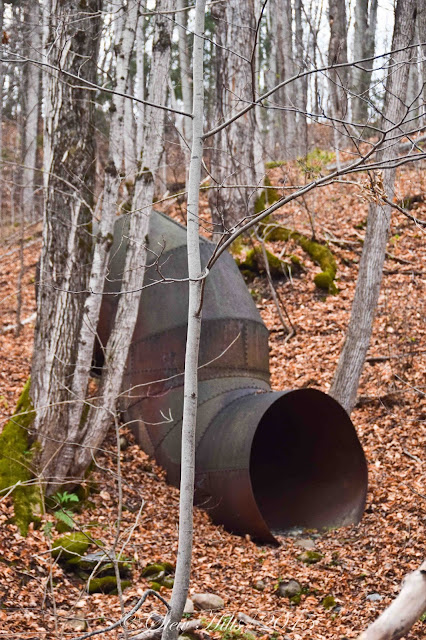 The metal pipe served to drop the water about 8 feet before it hit the turbines in the generator building, and slow the water down a little.  Wooden pipes would explode subjected to the pressure of water going around this bend! 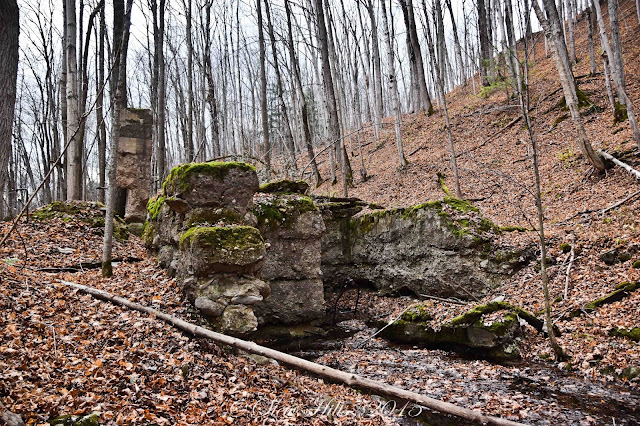 All that remains of the generating station are a few old concrete walls, slowly decaying in the woods. 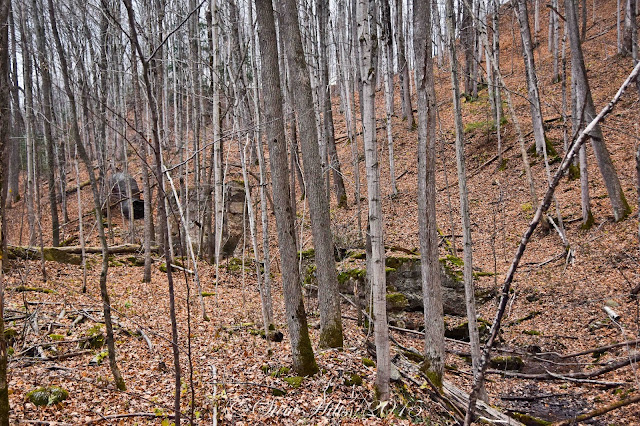 Below them is a narrow valley followed today by a damp trickle of water, where the water exiting the turbines was allowed to run slowly back to the Bighead River.  The whole story was a fascinating mystery in the woods, evidenced by bits of concrete and metal, and sculpted shapes on the landscape that told a story of the years 1904 - 1923, when the dam washed out and the whole thing was abandoned.  Valuable parts were dismantled and removed.  It is indeed amazing how nature reforests our land if we stop using it!  And how little bits of history can be found in the landscape around us.

Walking time with dog - 40 minutes.  Walking time in the woods - 1 hour (helping develop a new walking trail at Hope Haven Farm, a therapeutic riding centre a mile north of us).  I`ll have that story in a day or two.