Last week our local photography group headed out to the village of Walters Falls for an outing, and our first stop was Walters Falls itself.  The member who organized this outing had promised to show us the way to get below the falls for pictures, which I had never done before, so I was looking forward to it. 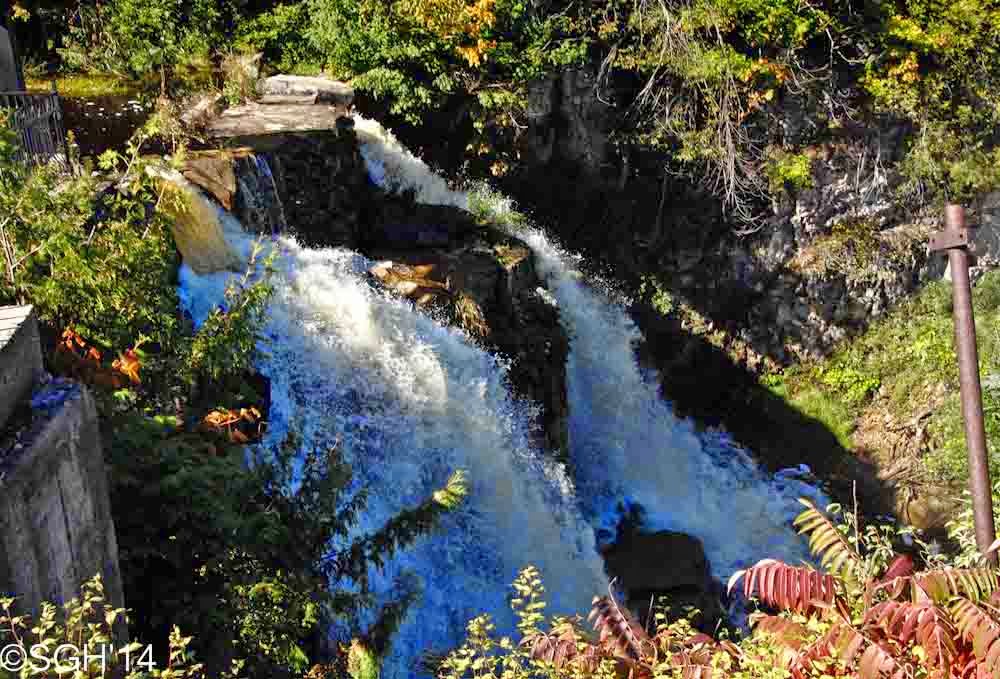 Normally you can only get a picture of the falls from the side like this, as there is no viewpoint out in front of the falls. 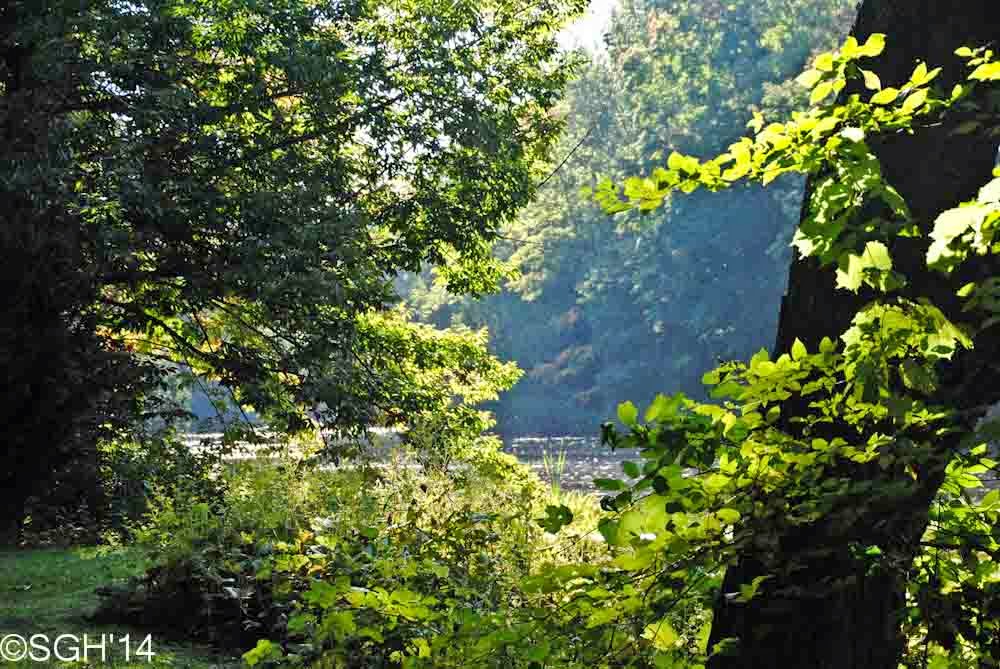 But before we got there we started upstream at the old mill pond, where we were practicing photos in the early morning light conditions. 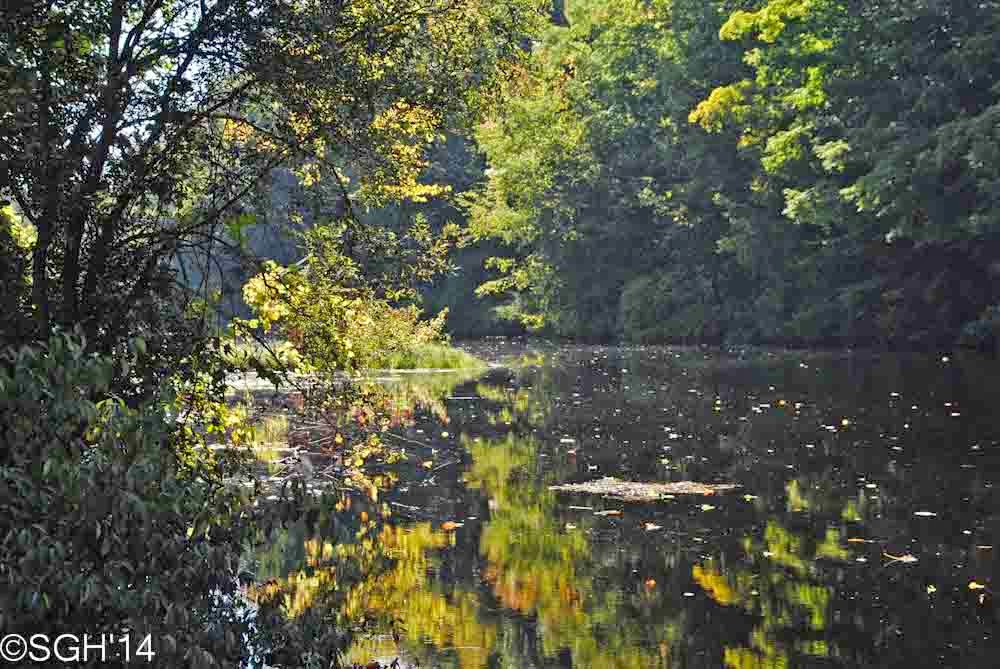 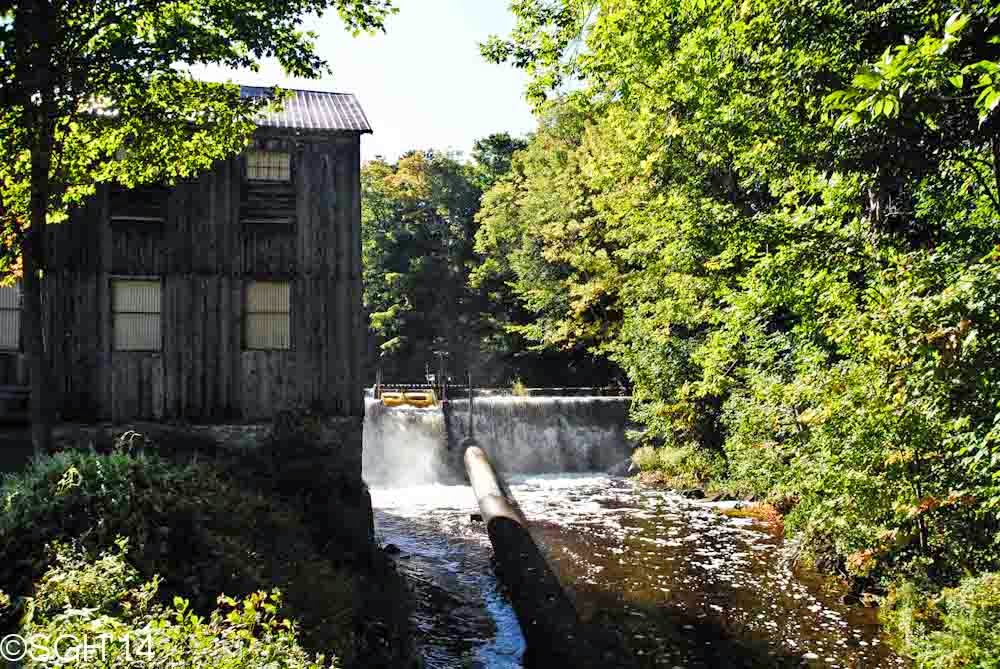 Then we worked our way around the only building from the old mill that is still standing, where you can get a view of the milldam, and the sluice that used to carry water to the mill. 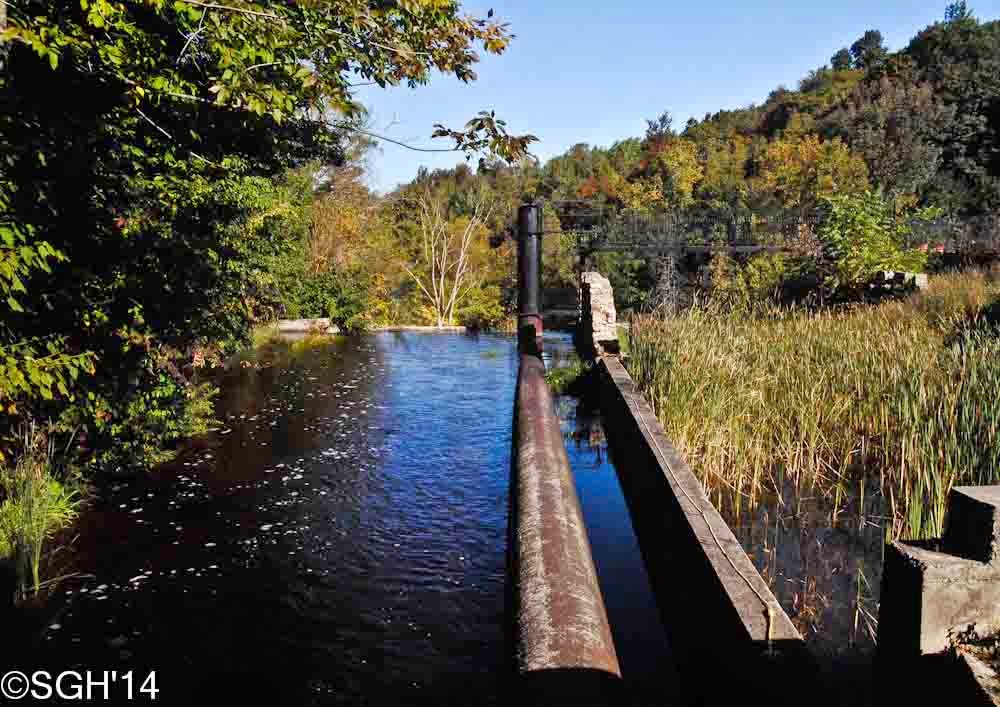 Looking the other direction, the sluice carried the water out to the edge of the cliff where it powered the millwheels.  The black vertical pipe at the end is the pressure relief pipe, that prevented the pipe in the mill from bursting apart, by allowing excess water to surge upwards.  You can see the more recently built elevated walkway to the right of the pipe, where visitors can walk out to look down on the waterfalls. But before we stopped there we headed down into the valley.  In spite of the 40-50 foot cliff around most of the falls, it turns out there is a path down a long incline to the stream in the valley.  Admittedly steep, but quite accessible - if you know where to find it. 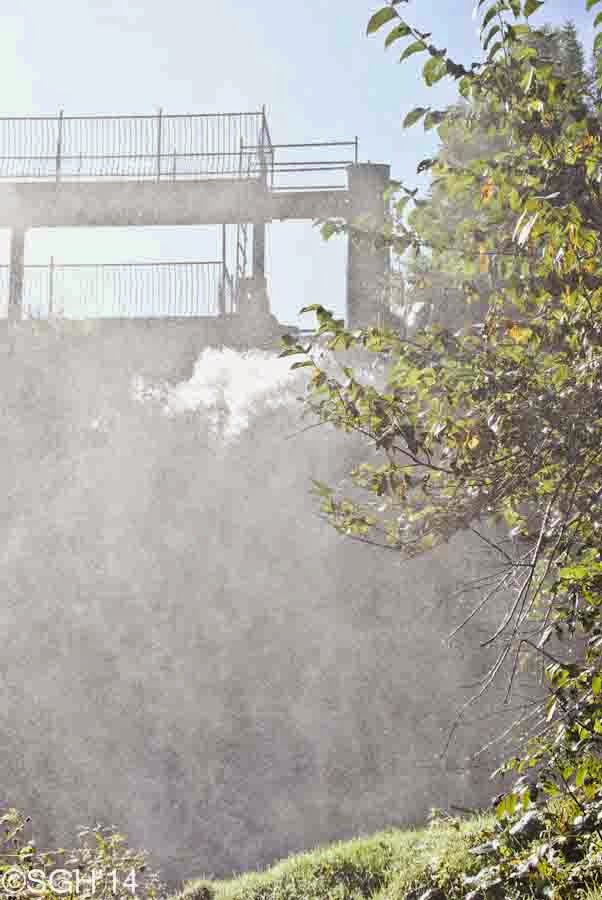 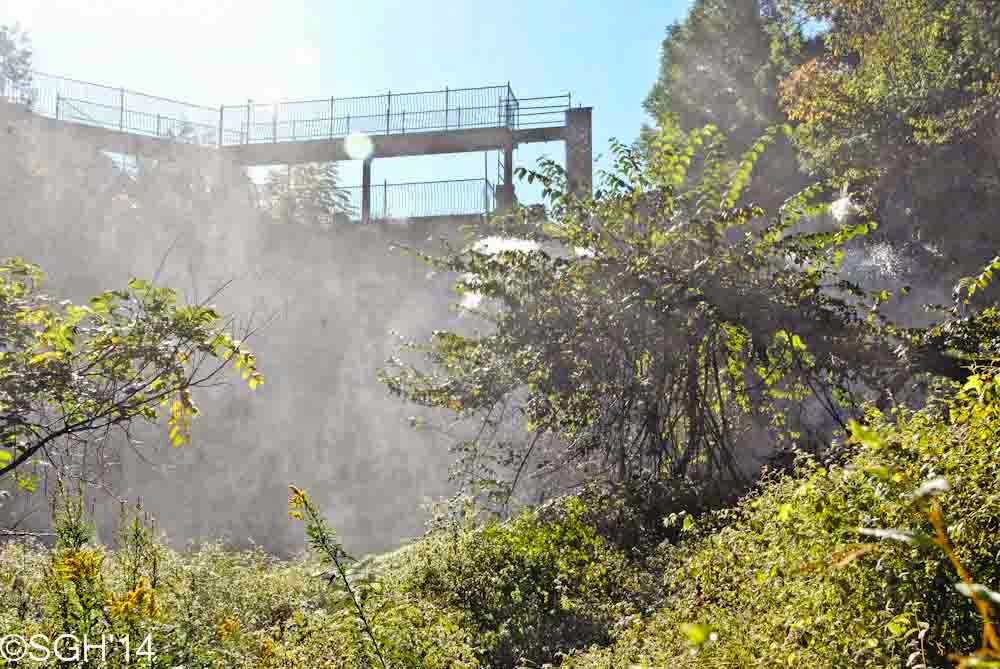 Well, we got out in front of the falls, but unfortunately, after two days of very heavy rains, the river was running like a torrent, pouring over the falls, sending spray in all directions, and flooding the valley below.  We could neither get close because of the flooded stream, nor could we stay dry because of the spray.  But now I know the route down, so next time I'll be ready, and come when the flow is just a little less torrential! 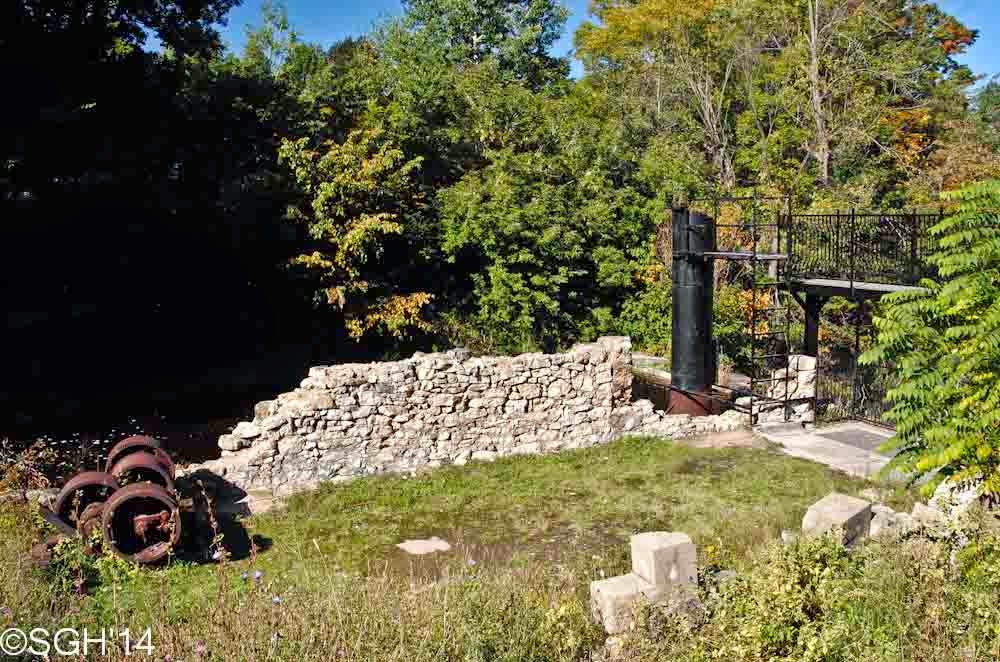 Back on top we checked out the remnants of the old mill, and then went to look over the end of the railing. 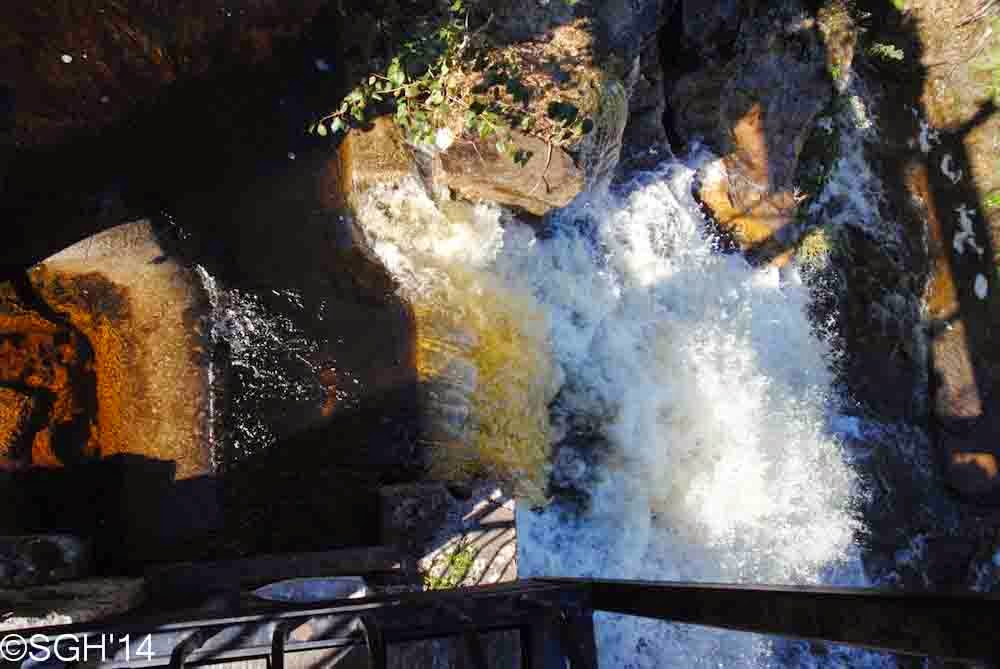 Here you can look straight down on top of one half of Walters Falls.  Tomorrow, one of the last water-powered mills in Ontario, right here in Walters Falls.