I may not be able to identify Goldenrod species, but I can identify the fern species we have around here.  I decided long ago when I was getting seriously interested in natural history, and then had to spend some time lying still in hospital, to memorize the Latin names of the 40+ fern species in Ontario.

Very few people seem to be experts on ferns (they don't have pretty flowers, and don't fly in to your bird feeder), so I thought it was a group of plants I could relatively easily become an 'expert' on!  I've been teaching people to identify ferns ever since, though I don't flaunt my knowledge of the Latin names anymore (the only ones I know), because I often forget them anyway now! 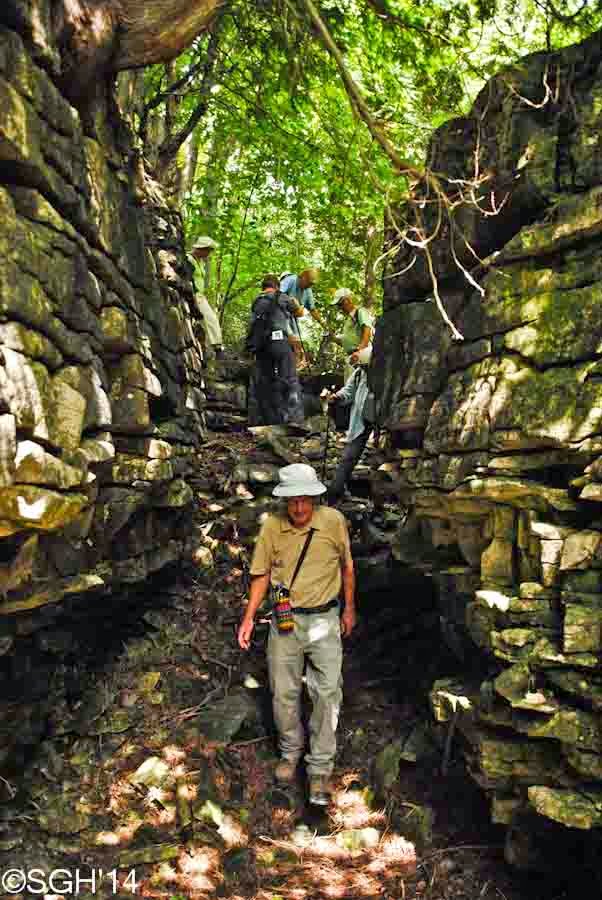 We were walking the Crevice Springs Side Trail on the Bruce Trail, and immediately headed down a crevice to hunt for ferns.  This was a 'Slowpoke Walk' where we went slowly and stopped to look at things, not a 'hike'. 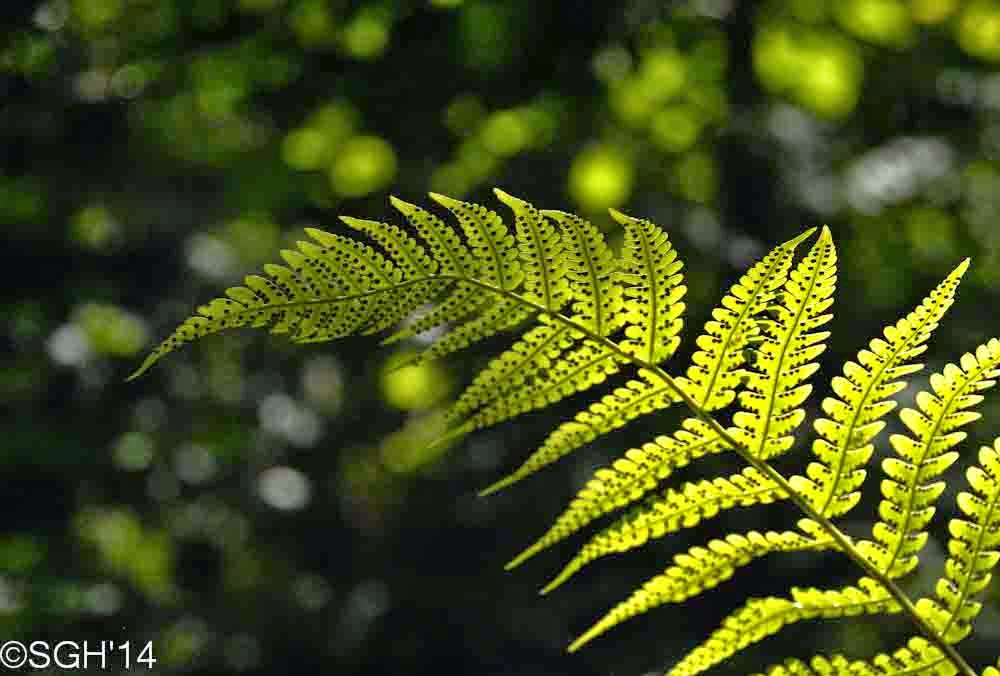 There were lots of ferns to see.  This is one of the most common in the habitat below the cliffs of the Niagara Escarpment, the Marginal Wood Fern, Dryopteris marginalis.  If you look closely you can see the sporangia (spore dots) right along the margins of the sub-leaflests. 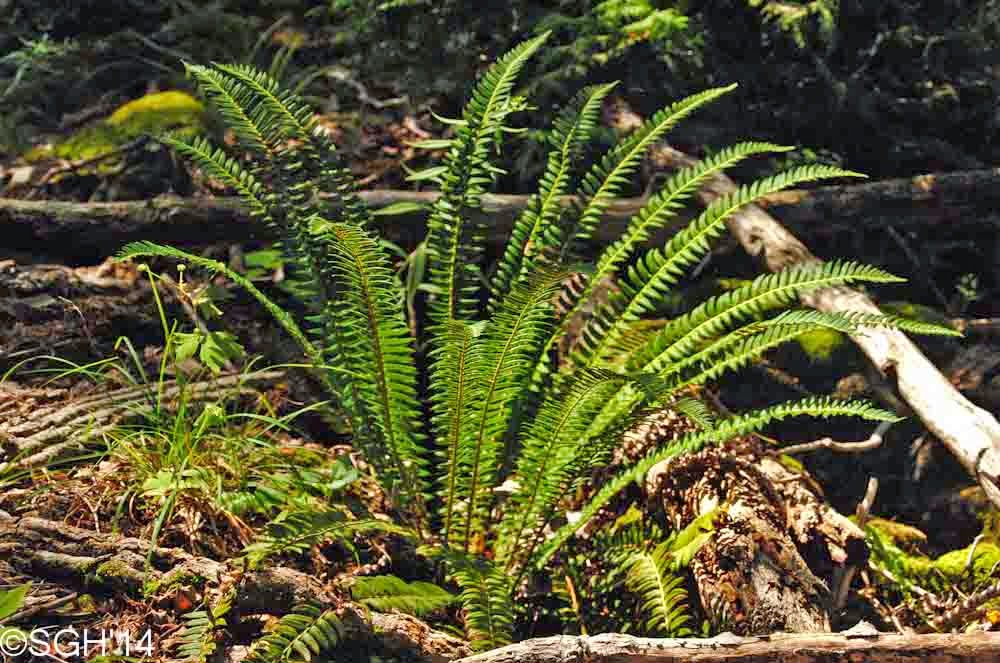 Northern Holly Fern, Polystichum Lonchitis, is another that likes the limestone rock along the Escarpment, growing in a classic cluster of fronds reading out in all directions. 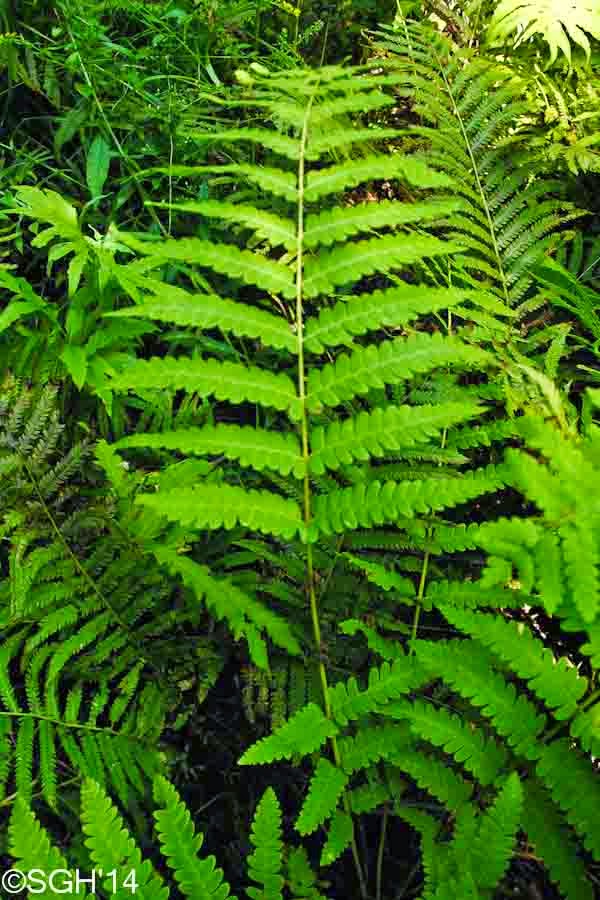 But this was my fern find of the day, the Interrupted Fern, Osmunda Claytoniana.  I hadn't seen one of this species in years, and never here in the Beaver Valley.  In the picture above the green frond, about 3 feet tall, is 'interrupted' by two missing leaflets, which instead are shrivelled small clusters of sporangia, in this species forming separate leaflets instead of dots on the back of the frond. 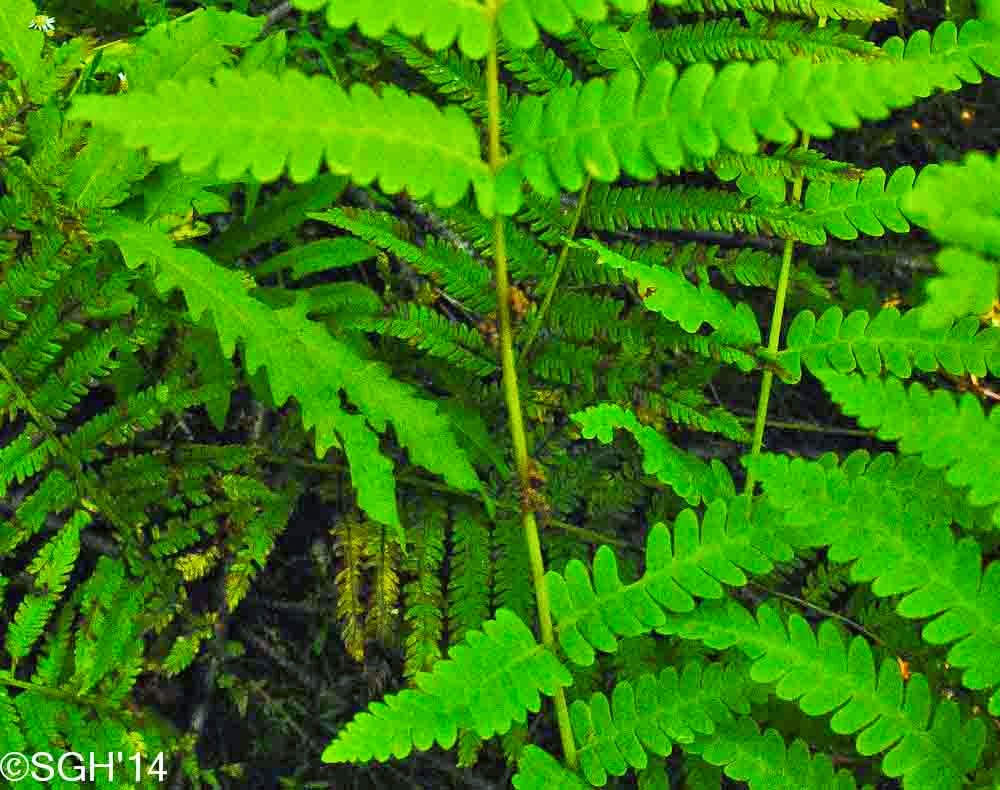 A closer look shows you the two missing green leaflets replaced by the fertile leaflets consisting of spore cases.  This arrangement is unique to this species. 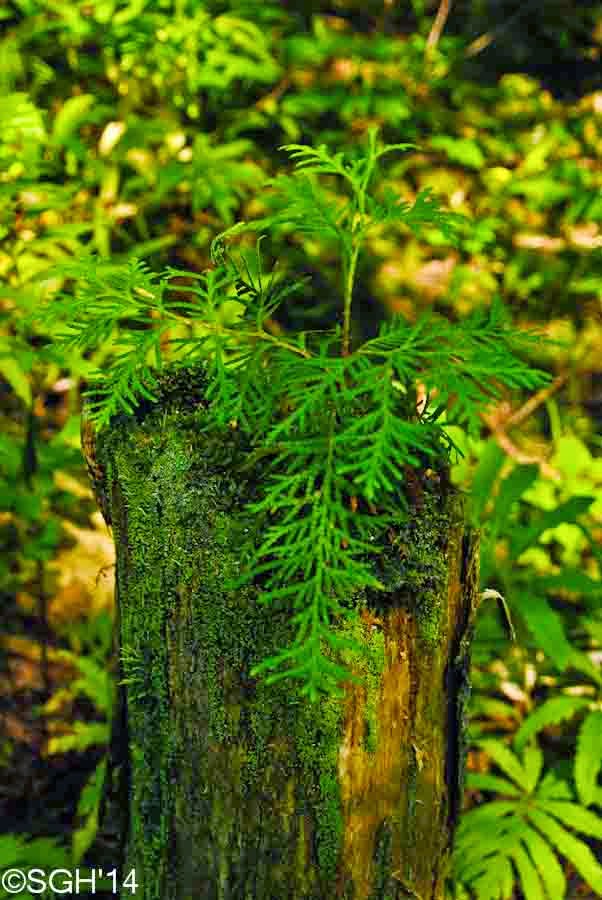 I just liked this little cedar tree growing out of the top of a small stump.  Will its roots reach the ground in time to hold it up before the stump rots out beneath it? 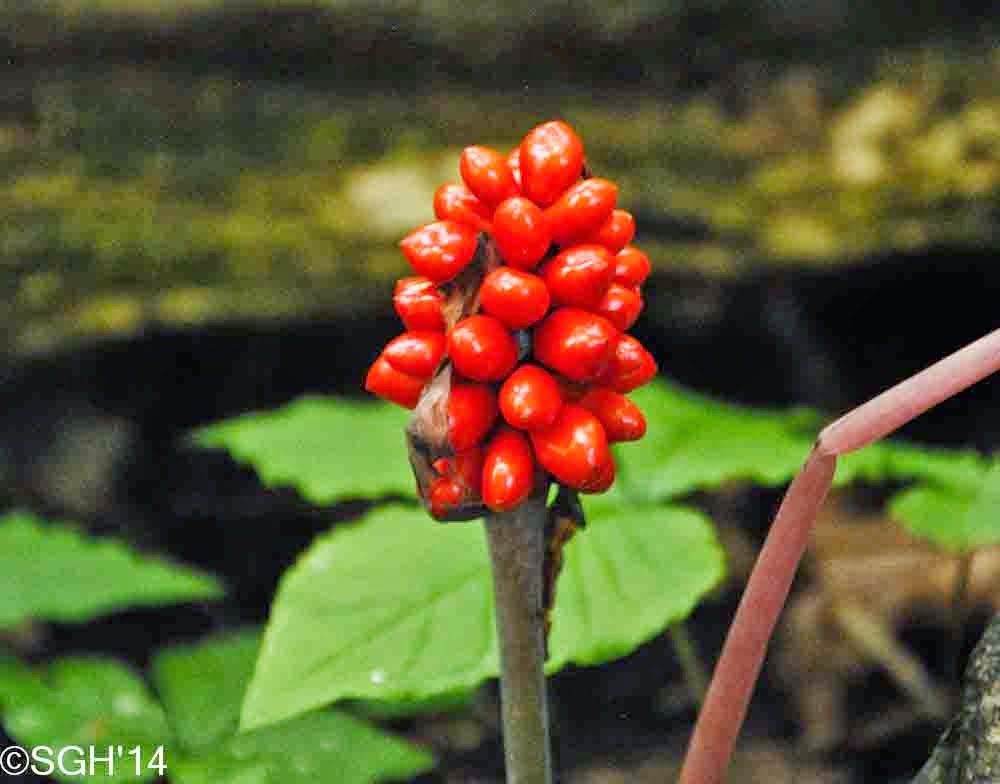 And the remnant of one spring flower, the bright red seeds of the Jack-in-the-Pulpit. 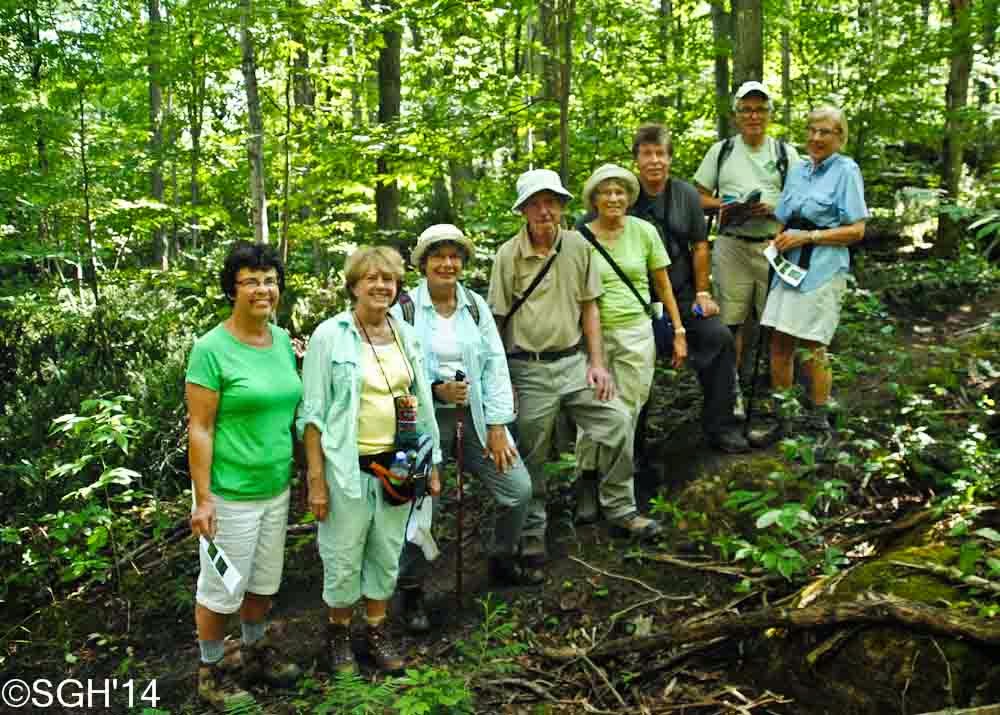 This is the dedicated crew who opted to follow me on this walk, all of them really interested in learning about ferns. 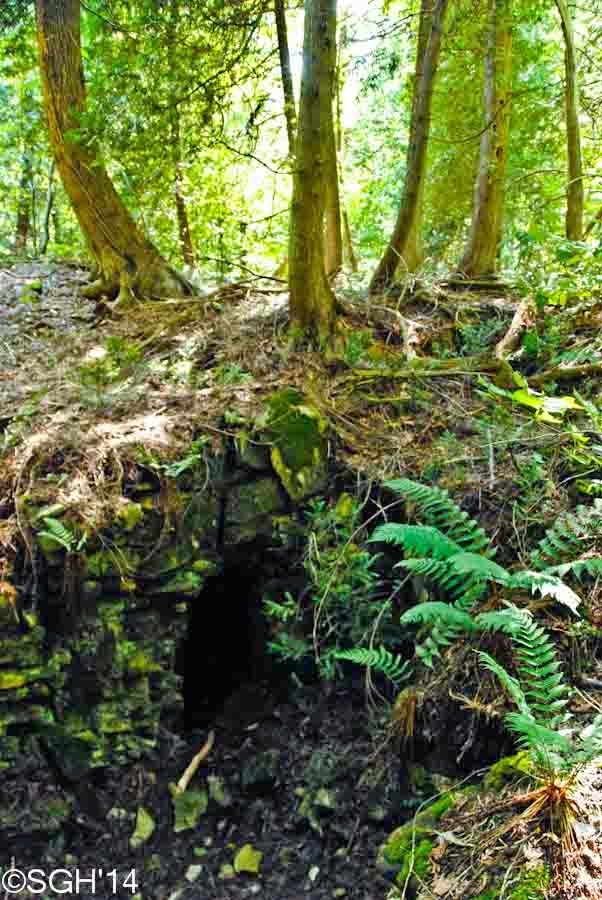 And one of them taught me something - pointing out this crevice cave, reputedly the hiding place for smugglers bringing in liquor during the prohibition era!