We're in the middle of 3 days of forecast snow flurries and squalls, with the temperature hovering around -15 degrees C,  so there aren't many blue skies at the moment.  But a few days ago we had several beautiful winter days.  And it really is winter here now, with a lot more snow over the past 48 hours! 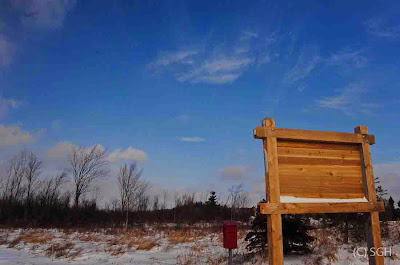 Not often I'd post a picture of an empty signboard, but this is the soon-to-be brand new trail head for the cross-country ski trails being planned at the Beaver Valley Ski Club.  I walked the trails when they were laying them out about a month ago to help with making a map, and I can't wait to try them.  When that sign gets filled in it'll be an exciting new opportunity very close at hand - I could literally ski to the trail head from here, a two minute drive away! 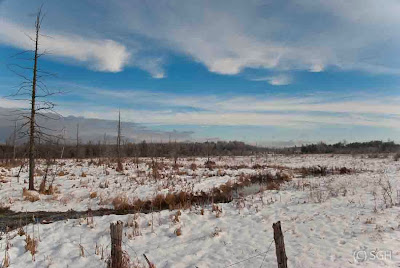 These were taken a little further down the 7th Line, on a very cold frosty morning a week and a half ago.  This stream is one that drains into the sinkholes that are part of Wodehouse Karst, but it was the cloud pattern in the sky that caught my attention.  This photo looks over a large wetland to the ridge in the distance where the new ski trails will go. 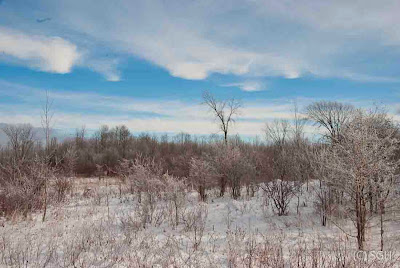 The same sky but a different view, a short distance down the road where the land is a little higher and drier, with a couple of elm trees silhouetted against the sky. 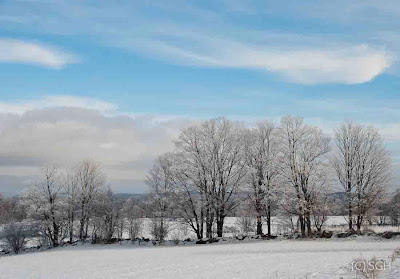 One of several very frosty fencerows of old maple trees just around the corner. 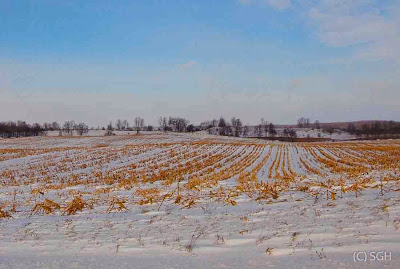 This picture was taken in mid-morning two days ago, just down the road to town, a bit west of here.  It's a large cornfield that they finally got harvested just 3 or 4 weeks ago. 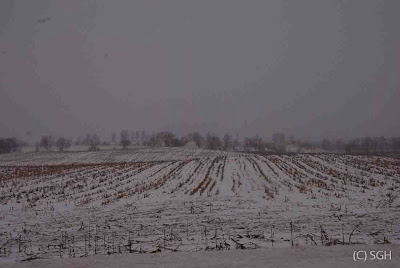 And just in case you get the wrong impression and think we always have beautiful sunny blue winter skies, this is essentially the same shot as above, taken 3 or 4 hours later in mid-afternoon.  The days often seem to move from a bit of sun and blue sky in the morning to gray and blowing snow by later in the afternoon.  Roads are bad and some meetings are cancelled around here tonight.