I've been anxiously awaiting the chance to try out the new 'Beaver Valley Nordic Ski Club' trails opened a few days ago at the top of the Beaver Valley Ski Club.  They've been developed by a team of volunteers, with support from staff of the downhill ski club, and cross both public and private land, through a variety of habitats.  So today, with the Christmas rush over, I strapped on the skis and headed out. 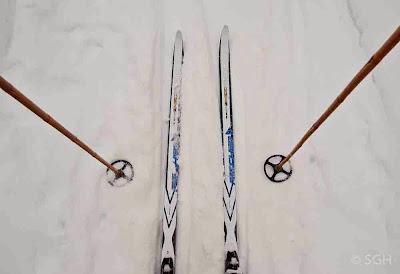 First time this year, and a two-hour ski - I'll have a few new aching muscles tonight.  Mind you I did go slowly and stop to take lots of pictures. 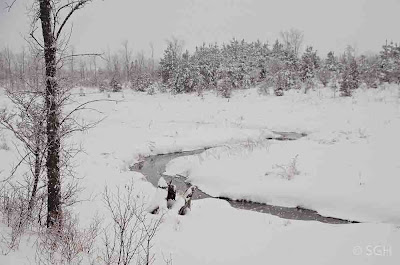 The first part of the trail goes along the edge of a large low-lying wetland containing the Lower Wodehouse Creek, the one that usually drops into a sinkhole, but on rare occasions forms an ephemeral waterfall over the cliff at the ski club. 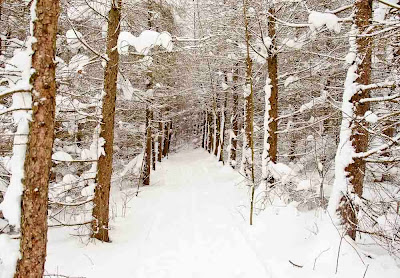 A good deal of the trail goes through plantations of European Larch, planted about 30 years ago.  They hold the snow very easily, so it usually looks like a winter wonderland in here. 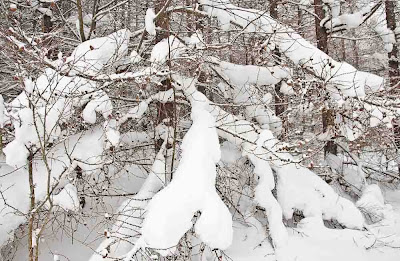 The lower branches of the larch, where there is little wind, really tend to hold large globs of snow, and we've had a lot, with no warmer weather to melt it, plus a bit of freezing rain to help it stick to the trees, so it's really snowy now. 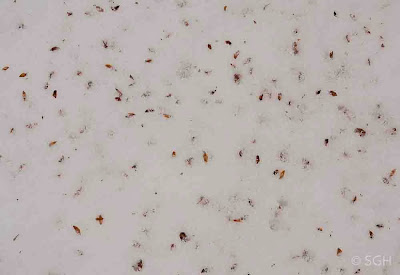 Under one larch I stopped when I saw the ground was covered in little brown seeds and cone scales.  Obviously a red squirrel had been sitting up in this larch chewing the cones for dinner! 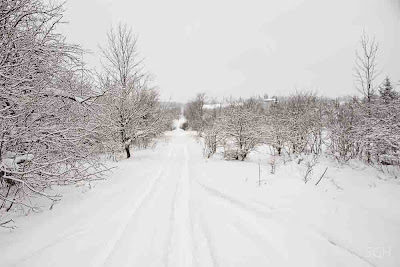 The ski trail through the trees crosses the old concession road part way along.  The surveyors who laid out townships in southwestern Ontario 160 years ago stuck stubbornly to their right-angled grid of lines, even when they hit the Niagara Escarpment cliffs.  This road goes downhill by way of a very long dog's-leg bend or two before emerging at the bottom.  Long impassible by vehicles, it's now only used by snowmobiles or ATVs. 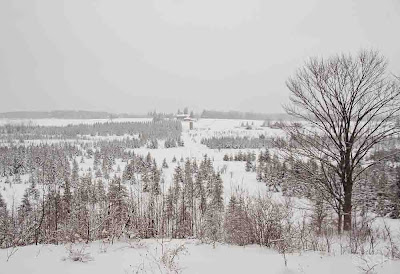 Half-way north you climb gradually up onto the Banks Moraine, a ridge of land running along the top of the escarpment in this area.  It's what hems in Wodehouse Creek (flowing north to south from right to left in the middle of the picture), leaving it to seek sinkholes in the limestone instead of running straight to the edge of the escarpment and tumbling downhill. 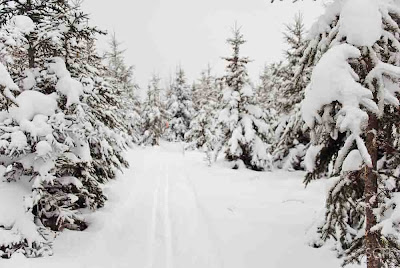 Half the loop at the end of the trail runs through spruce plantation, where the trees were even more heavily laden with snow.  By this time it was also snowing heavily.

Altogether it was a good two-hour ski for me, only about two minutes from home.  I think I'm going to enjoy these trails quite a lot this winter!  You can find further info at: Beaver Valley Nordic.