Yesterday the dog and I headed into the woods on the farm next door on snowshoes.  It was a challenge because of the crusty ice layer in the snow, but beautiful with 3" of fresh powder snow on top of the icy crust, and all over the dogwoods. 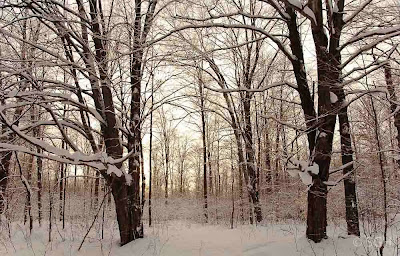 You can see the low layer of dogwood shrubs that grow beneath the trees throughout the east end of the woods in this picture, but before I show you the white wizardry of the dogwoods, let me tell you about the snowshoes. 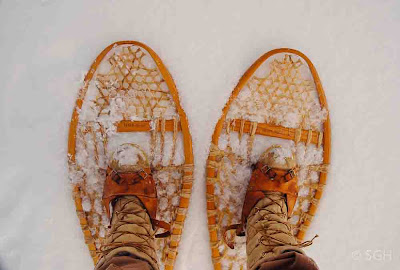 I have 4 pair to choose from when I go snowshoeing - 2 old style larger ones (these are the 40 year old, 4 foot beaver tail snowshoes), and two modern pair, one of which is much smaller.  With the icy crust under the surface of the snow the larger snowshoes let me just walk across the snow easily, so those were the ones I chose - but I got to the point where I took the picture above, and the old leather harness broke.  I was forced to go back to the car and put on the smaller modern pair. 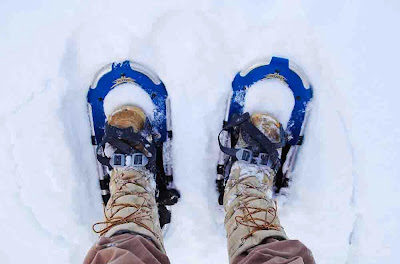 These are great for walking on a packed trail behind other snowshoers, but not so good for breaking trail.  With them on I sank through the crusty snow making only slow and arduous progress - except where I was following other snowshoe tracks part of the way.  And it's easy when you sink through for the toe to catch the icy crust and trip you into the deep snow just when you least expect it! 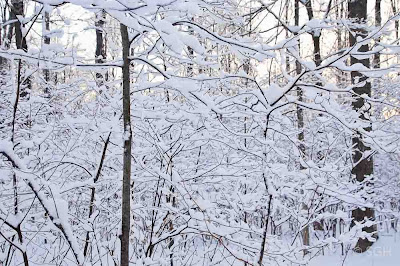 But  let's pretend that didn't happen.  These are the dogwoods.  They tend to hold their branches horizontally, and have small twigs that catch the snow, so walking through them is like being inside a world of powdery lace. 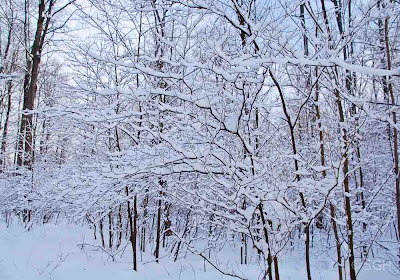 Snow was caught on every branch, in all directions, leaving the woods looking like a wizard had created a new world of fine white icing on every black twig, almost like being inside a blizzard. 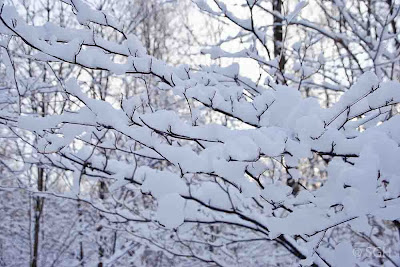 It was late afternoon, the sun was starting to set, and the light was gentle in the woods, silhouetting these branches. 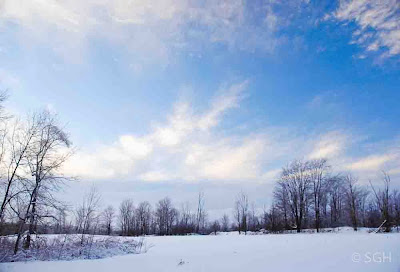 We did make it out to the open fields (this was where the corn was planted this summer), before tripping in the deep snow.  Slow going until I found another set of tracks I could follow back. 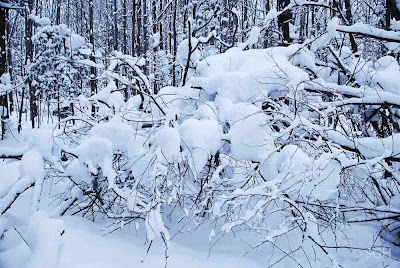 We looped through the swamp, now mostly frozen and buried in white.These fine branches had caught a lot of snow puffs.  I could just feel the snow drifting down the back of my neck if I tried to go through that! 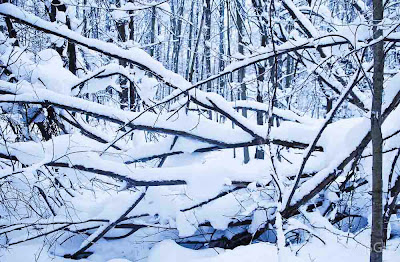 Last year the trail went underneath this pile of deadfall.  At that time it was still leaning high enough in the air that you could walk under it only ducking your head a little.  It must have crunched to the ground over the summer.  We detoured around it and headed out to the trail home.